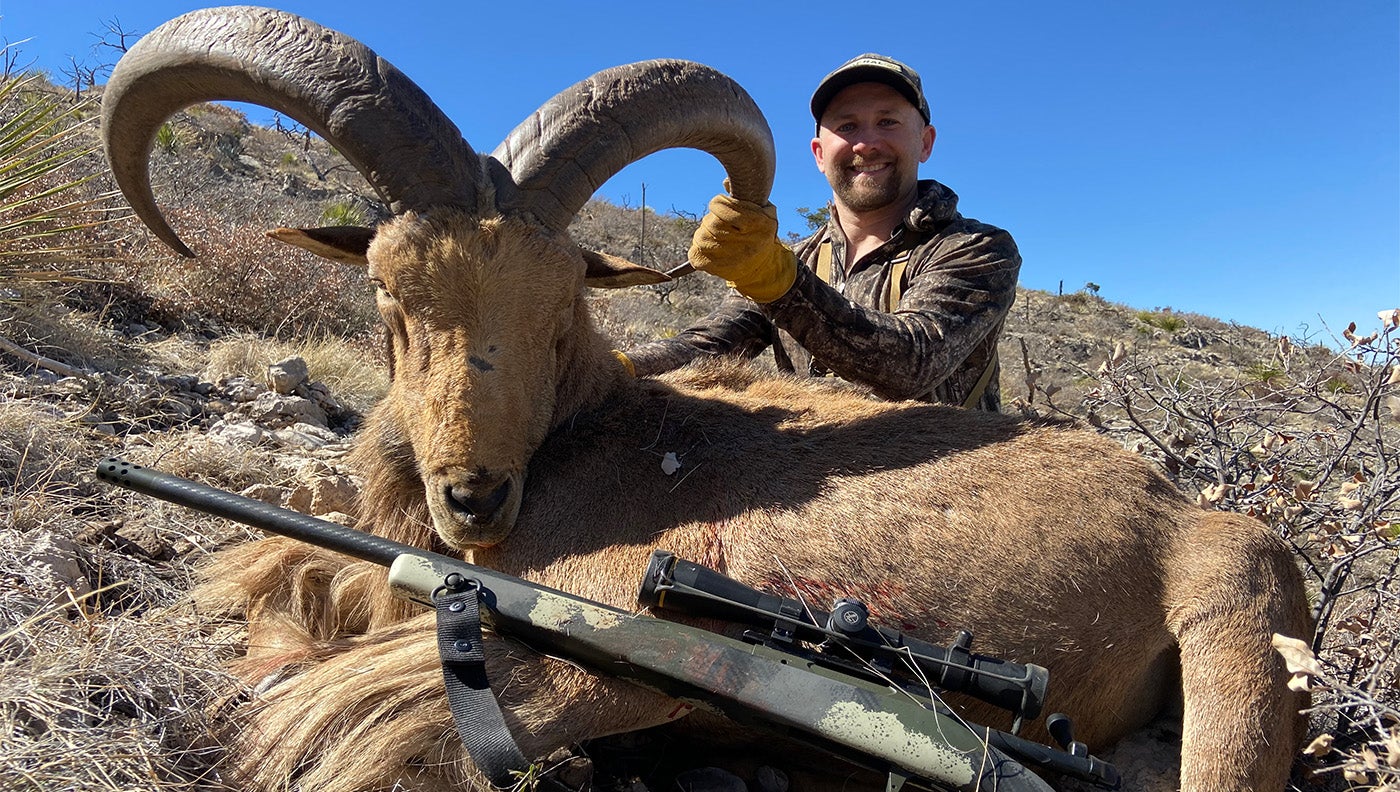 The author poses with his Texas aoudad taken at more than 400 yards. Will Brantley

I’M NO SHUFFLEBOARD PLAYER, and the odds of my learning to play inside a West Texas water-silo-turned-hunting-camp powered by solar panels seem slim. But the 22-foot, regulation-size shuffleboard table is here nonetheless, and my three aoudad hunting companions—all of whom have been into the whiskey—are goading me to slide a puck across the sand.

“I’ve never played shuffleboard in my life,” I say.

“You weren’t a long-range shooter until this morning either,” says the outfitter, Jim Breck Bean. “But you did fine with that, so step up. It’s your turn.”

I’ve been wrestling with it all day, having taken a 400-yard shot on an aoudad—and with a 6.5 Creedmoor no less. What would I say for myself if asked to explain? I’ve written some not-so-nice things about long-range shooting these past few years, and I’ve taken a few jabs at the six-and-a-half Creedmoor, too, though mostly just to get the fanboys riled up.

Still, there are real reasons why I’ve never warmed up to today’s long-range craze. I just really like getting close to animals, no matter how capable my bow or rifle may be. Plus, I’ve been around a lot of shot-at critters, and I’ve noticed that when rifle shots in the field exceed about 250 yards, bullet placement tends to get a little sketchy.

Still, none of that changes the fact that there’s a cooler full of aoudad meat in my truck, along with a magnificent cape and set of horns. And it got there because I shot from hella far away.

Sometimes You Can’t Get Any Closer

From about a mile off, we spotted the aoudads—also known as Barbary sheep, or just sheep to the locals—and we picked them over through spotting scopes. Bean, our guide, is not the average Texan. He doesn’t talk like a Texan, and if he treats himself to barbecue very often, it doesn’t show. Bean doesn’t fool much with whitetails or feeders.

“I like hunting sheep and things that act like sheep,” he says. His favorite is the native desert bighorn, a species that’s been largely displaced by the aoudad, a North African transplant introduced in the early 1900s. Aoudads are hardy and have become a popular game animal, particularly for hunters who can’t afford to chase real sheep. And you don’t need to draw a permit to do it.

Bean says aoudads are as flighty as anything. “Some animals stand and watch if you drive by,” he says. “Not aoudads. They haul ass as soon as they see you.” Add in the open high-desert country, and the average shot at an aoudad is long—400 yards, he says. I’m shooting a Springfield 2020 Waypoint with Federal Terminal Ascent ammunition—a combo designed for this sort of thing—but the longest practice range near my home is 300 yards. I say as much and add that I’d prefer crawling closer.

But after Bean identifies a couple of shooter rams in the group and we begin a stalk, a long shot seems imminent. We crawl over the rim of a rocky hillside that spills into a deep wash and glass the rams scattered on the hillside across from us. The closest one is 389 yards. Bean spots a bigger one, bedded at the base of a boulder another 30 yards off. He says we’re not likely to get closer without busting them.

Looking at the moonscape between us and the aoudads, I know he’s right. I turn to my buddy Jason Nash, who works for Federal and has done more long-range shooting than I have, and I offer the shot to him. “I’ve just not practiced this far,” I whisper. He smiles, shakes his head no, and starts punching numbers into a ballistics app on his phone. My scope is zeroed at 100 yards, and there’s no wind. After a bit, Nash tells me exactly where to dial the turret.

Stepping Up and Taking the Shot

We arrange two packs for a prone shot, and once I settle in, I know I’m solid. I put the crosshairs on the bedded ram’s shoulder, squeeze the trigger, and see a plume of dust hit maybe 8 inches low. The ram rockets to his feet. I work the bolt, hold on the top of his shoulder, and squeeze again. Heart-shot, the sheep takes a few steps and falls.

The bachelor group scatters, and as we’re picking our way across the canyon, toward my ram, Bean spots another shooter eyeballing us from a dry creek bed 400 yards away. Nash takes a rest across a boulder, and soon we have two aoudads to skin.

“I like getting closer too,” he says. “But sometimes you can’t. It’s good to know that the guns can do it.”

I guess that’s how I come to peace with it. Four hundred yards is still a good bit farther than I care to shoot—and given just about any other circumstance, it’s a shot I’d pass on. But stepping out of my comfort zone for a little bit wasn’t an altogether bad thing.

And with that in mind, I square up to the shuffleboard table and give the puck a soft little shove.