Forget scent-eliminating sprays and detergents. If you want to beat a buck's nose, hang your stand where he can't smell you. Here's how 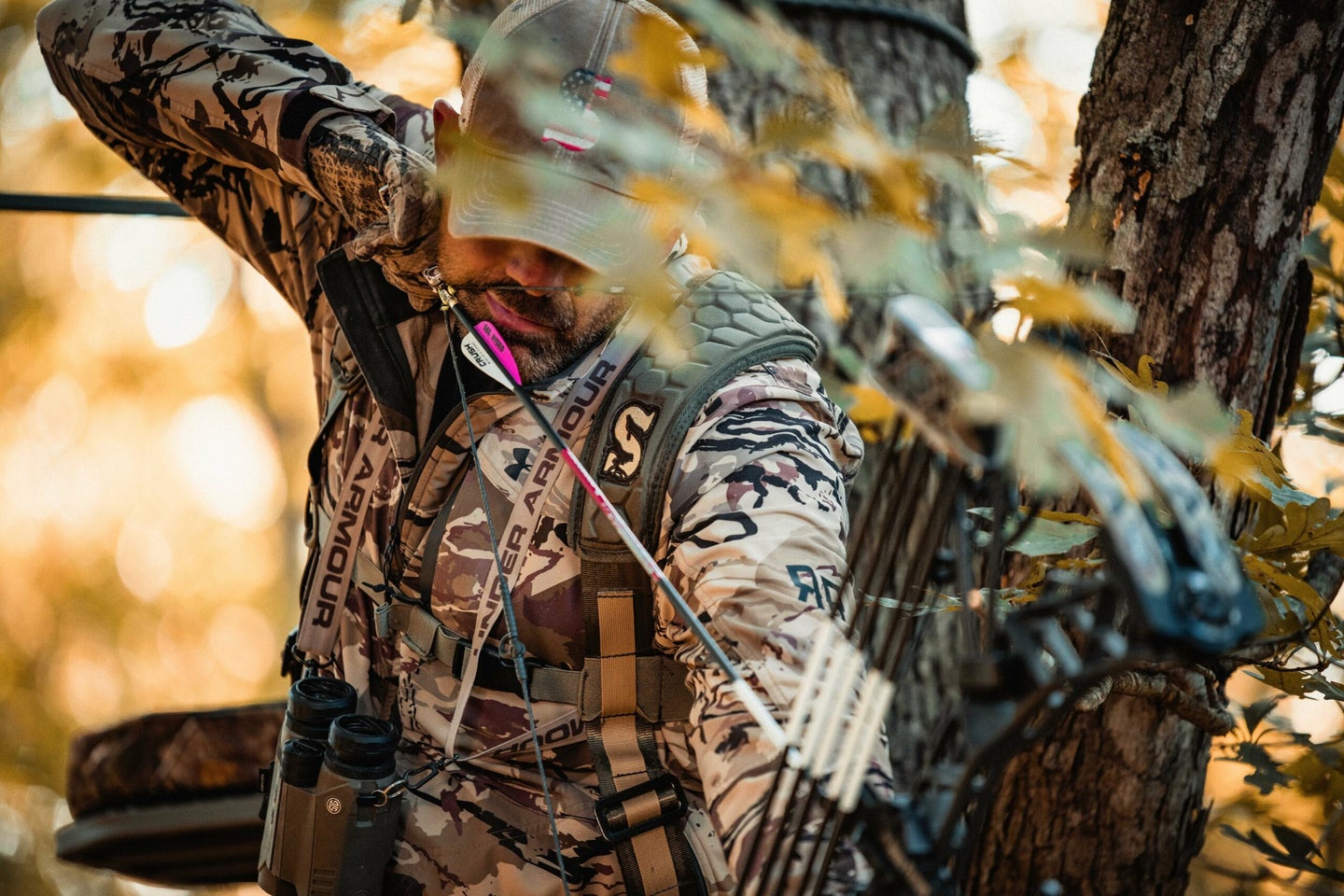 You'll get more shots from your treestand if you put it where it's less likely for deer to smell you. Summit Treestands
SHARE

It was a perfect late-October morning for rattling. I cracked the antlers together, tickled the tines for a second or two, and then followed with a 20-second sequence of mashing and gnashing before hanging the horns. It was no surprise when I heard the heavy shuffle of a buck approaching through the oak and cedar timber surrounding my stand.

It was also little shock when the buck—which I’d not laid eyes on yet—stuck to the thick cover and plodded downwind of my setup. While some bucks will charge in to check out a fight, you’d be crazy to count on it. Most bucks like to know what they’re getting into before committing to a fight and will usually swing a short ways downwind of your position to take stock before waltzing in.

Fortunately, I’d hung my treestand with just such a buck move in mind, and thanks to a drop in terrain downwind of my stand, I knew that his scent-checking loop would be futile. Satisfied there was nothing to be afraid of, the buck swung in to look for the fight, giving me a 10-yard chip shot in the process. That mature buck got a pass that morning, but only because he was missing half his rack, and it was early in the rut.

Beating a whitetail’s nose is a critical skill for any bowhunter, and you don’t need sprays or detergents or carbon clothing to do it. All you have to do is hang your stand in a place that won’t allow a buck to smell you, regardless of where he comes from. My buddies and I called these “no-bust” stand, and here are four perfect examples.

The buck in the scenario above could not catch my scent because I was set up on the very south end of a long bedding ridge that runs north to south. I hung my stand in a tree right near the very end of the ridge, where the terrain falls precipitously. If I wait, as I did on that morning, for a north wind, my scent will blow out over the valley below. Any buck wanting to get downwind of my stand basically has to drop 15 feet in elevation to the closest trail, which essentially elevates my 18-foot stand to a 33-footer. So, unless some funky thermal pops up (or, rather, down), that deer is not getting me.

What’s more, bucks (actually, all deer) love to bed on ridge ends. So I’m able to sneak into a bedding area early in the morning and hunt without being detected. I hung this set on a hot July day, after scouting the spot in March, and then I just stayed the heck out of there until the late pre-rut, when I knew I had a chance to beat a buck back to this bedding spot. I’ve had this stand in place for seven seasons, and I have yet to hunt it and not see at least one buck.

If there’s a downside to this setup, it is the walk there. The hill leading up to the ridge is so steep that I call the stand “The Ski Lift,” because I wish I had a T-bar pulling me up the slope in the predawn. The climb is strenuous enough that, even on the coldest of mornings, I strap all my cold-weather gear to my pack and make the trek in the lightest clothing possible. But it’s well worth it when I know I’m virtually guaranteed to see a buck—and I know that he can’t bust me from downwind when he shows.

[2] The Hillside Wash or Ravine Ambush

One of my favorite no-bust setups in my area occurs at another terrain feature: a wash, or ravine. Almost anywhere you have steep hills, like we do here in Southeaster Minnesota, you’ll also have washes or ravines, caused by erosion, that run down the faces or certain slopes. While some of these gullies are relatively shallow and can be crossed by deer in several places, the best hunting candidates are deeply eroded and full of boulders and logs. This forces any deer navigating that hillside to cross the wash at either the top or the bottom.

Placing a stand near the wash crossing at the top can result in a perfect no-bust stand. As with the ridge-end setup, you simply wait for a prevailing wind that blows out toward the downhill slope and out over the valley, and it’s virtually impossible for whitetails to smell you. Even better, the wash creates a funnel that any deer moving through the area, especially bucks cruising during the rut, are all but forced to traverse.

Because there are typically ag fields on ridgetops here, I usually approach this setup by climbing up the hill in the morning. This prevents me from spooking deer still feeding in fields during predawn. And if I follow the edge of the wash on my approach, I won’t leaving any residual scent on any trails the deer will use above the wash. One note of caution: Make sure you have a strong enough breeze to counteract thermals. A steady wind of 7 to 10 mph or more is ideal.

The other option is to set up near a barrier that prevents a buck from circling downwind, such as a fence, lake, or deep creek or river. Obviously, if a buck is truly serious about getting downwind of you, he’ll jump a fence or dive into the water to do so. But the barrier will definitely discourage the buck from making such a move, and on natural movement—the reason you’re setting the stand in the first place—that discouragement is typically more than enough. Remember whitetails, especially mature bucks, are basically lazy creatures that prefer the path of least resistance.

Of course, the key to such a setup is having the wind blowing from your stand toward the barrier. Ideally, you want to be just close enough to the barrier that a buck can still get slightly downwind of you, but you’ll be high enough that your scent will blow right over him and he won’t smell you. This is especially critical when rattling or calling because, as noted above, circling downwind is hard-wired in whitetails. Having that small buffer between your setup and the barrier gives the buck the comfort of getting downwind of the sound but not enough to bust you. Some bucks simply won’t commit unless they can make that circle, so go ahead and let them.

Lacking a hard barrier, it’s often possible to play on a buck’s natural tendency to favor dense cover and create an almost-no-bust setup. In the big woods, for example, I’ve set up on a swamp or clearcut edge, with my scent blowing into the mature hardwoods behind me. Sure, just a few steps into the open timber and a buck could nail me…but I’ve watched enough of those Northwoods ghosts to know that I’m betting on them sticking to the thick stuff and trusting their eyes and ears to do the danger detection.

In farm country, an open field or cow pasture can accomplish the same result. While some deer aren’t shy about using fields and openings, most mature bucks are going to avoid them. One of the favorite moves of a buck responding to calling in such a scenario is to pop briefly into the opening, but proceed with his flank tight to the cover. Again, if he gets downwind of my stand, my scent is typically blowing so far over him that I’m undetectable while I take the shot.