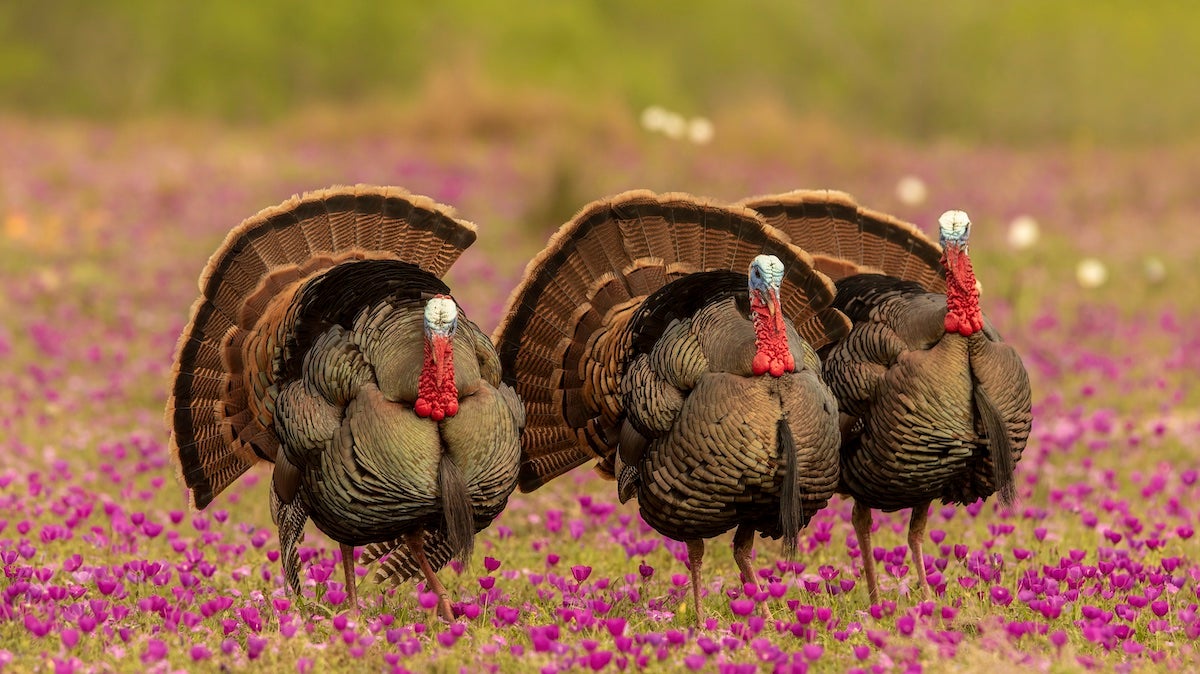 Locked down inside a D.C. apartment for months, the author will do anything to get outside—even pay for a Texas turkey hunt

MY FRIEND Thomas’ invitation to join him on an April turkey hunt in Texas sounded almost like an apology. “Hey, man,” he said, “I know turkey isn’t your thing, and I understand if you don’t want to go. You’d have to fly to Little Rock, and then we’d drive 500 miles to the eastern Panhandle.” He added that the outfitter charges $1,200 for three days and lets you shoot only two birds instead of the state’s limit of four. “But he’s got a pile of birds and I’ve been going for forever and I just thought I’d ask.”

“Where do I send the check?” I said. To understand this moment, you need to know that thanks to COVID-19, I’d hardly left the house for 14 months. During that time, I’d taken to verbalizing my internal debates about the day’s most important ­activity—​what to stream on Netflix—​and it was starting to get ugly. One side was getting increasingly passive-­aggressive. “No, let’s watch what you want, since my opinion counts for nothing.” It was only a matter of time before the other side started throwing punches.

“So you want to go?” Thomas said. “Last time we talked, you’d given up turkey hunting.”

“People change, Thomas,” I said. “Other than going to the grocery store and getting a colonoscopy, I haven’t left the house in six months. I sent you pics of my colonoscopy, didn’t I?”

“I’ll just pretend you didn’t say that,” he said. “I’ll loan you a gun so you don’t need to bring one. Glad I called.” Click. Just like that, I was in. I’ve never paid to go hunting in my life, but $1,200 to get away sounded like a steal. You can spend that much in three hours with the right shrink.

After more than a year in lockdown, the 500-mile drive to Shamrock felt like a jailbreak. Everything was so vivid. Even the road signs amazed me. I mean, how likely was it that each new billboard lawyer would be even more of an attack dog than the last one? Despite the relative sameness of the landscape, I was struck by how beautiful the countryside was, and how different from my D.C. apartment. I’d also never realized how many tanning salons, religious booksellers, and adult-toy stores there are in this country. A business by the side of the highway combining all three would make millions. (Note to self.)

The only problem we had was the radio. Thomas is a big guy with an alpha personality who believes that his taste in music is better than yours. He’s a fan of a certain kind of country music that sounds like pop and is often sung by Yankees putting on Southern accents. Having ears of my own, I begged to differ. Thomas pointed out that it was his truck and that I only like “mopey” songs anyway. Because I’m not so alpha, we compromised, meaning that we listened mostly to his music.

The next thing I knew, it was 4:30 a.m. and Thomas was banging on my bedroom door. We got up, drove through a couple of gates, parked, and split up. I was to follow a path for about 300 yards until I came to a feeder in the corner of a field and then hide myself. I chose a cedar tree about 40 yards off the corn and set up. To me, building blinds is one of the purest joys of turkey hunting. Like most boys, I was a manic builder of forts and briefly contemplated a career in the field until I was identified as having no mechanical aptitude. Turkey hunting brings a new legitimacy to this primal instinct. I really could have gone to town with a pair of pruning shears, but even just gathering loose branches, I soon created a nifty blind.

I hadn’t hunted turkeys in three years, mostly because it takes me a long time to adjust to waking up at 4:30 a.m. As the sky lightened, I could see that Texas is a good place to be a scraggly brown plant. Preferably with thorns. I dug out the two turkey calls that I can work, a slate and a single-sided box. I no longer attempt to use diaphragm calls because the only sound I can produce on one is that of a man gagging. I tried a few soft yelps and was pretty happy with them. The beginnings and ends of the calls sounded like a basset hound being waterboarded, but there were parts in the middle that sounded very like a turkey. This was fine with me. Turkeys aren’t born knowing how to call either, and having been to more than one NWTF-sanctioned calling contest, I can tell you that a real hen wouldn’t have stood a chance.

It turned out to be a slow morning. At around 10:30, Thomas drove up, also empty-handed. He stopped at the feeder for a few seconds, then rolled slowly forward, looking around for me. When I stood up and walked toward him, he said, “Nice blind. I had no idea where you were.” At least I was doing that part right.

A Long Shot at a Texas Tom

That afternoon, the two of us hunted from a pop-up blind near another feeder. I felt a little weird about this. Here I was hunting like a rich man, in a blind I hadn’t put up, on land I’d never seen before, on a food source that went off by the clock. It gave me renewed respect for guys who go out on public land and kill turkeys. This lasted all of 45 minutes. After not seeing or hearing a bird in that time, I became angry at the turkeys, decided that I damn well deserved any and all advantages I had, and resolved to murder the first legal jake I saw. Either Thomas or I called every 15 minutes, mostly to keep ourselves entertained. We whispered about politics, the state of racial relations, and the COVID vaccine. We agreed that anybody whose opinions diverged from ours was an idiot.

Around five o’clock, I spotted a lone gobbler dawdling in the brush on a hillside about 150 yards away. I called, and gradually the bird began making its way toward us. I was using a Benelli Super Black Eagle II with a Carlson turkey choke and TSS No. 9 shot, a rig that Thomas said would kill birds out to 80 yards. This was more than twice the distance from which I’d ever shot at a turkey. I’m not sure whether I didn’t believe him or just wasn’t any good at estimating distances farther than I could shoot a bow. But I wanted the bird a lot closer before I pulled the trigger.

“Shoot his ass,” Thomas whispered. His ass looked pretty small from where we were, and I didn’t feel like I could shoot it from so far away with any real hope of killing it. I’ve been in situations before when Thomas urged me to shoot before I was ready, and I’ve learned to tune him out at such moments. The shot on any game ought to be an execution—swift, sure, and humane—rather than an attempt.

“Shoot him!” Thomas whispered again. Again I waited. The bird was still moving closer. But then he stopped behind a tree, and the next time he moved, he was going the other way. It was now or never. I focused on a gap about 9 inches wide between two trees. When the bird stepped into it, I fired, and he went down, flopping but anchored.

Thomas clapped me heavily on the shoulder. “Hell of a shot! Nice! You called him in and killed him.” I looked around. We paced the distance off at 56 steps. The sunlight had softened. I was 1,500 miles from home and hunting with a good buddy I rarely saw. I’d just killed a three-year-old gobbler. The bird was big and heavy, its feathers iridescent with red, bronze, and gold in the late daylight. Thomas makes superior cocktails. He had a thermos full of margaritas in the truck. It was all so wonderful I could barely stand it.

The Second Bird Goes Down

The next morning, I was deposited near another feeder. I found another cedar tree and made another blind. After about an hour, a roadrunner appeared 20 yards out, hopping about and peering intently at the ground, as if it could make insects appear by force of will. I’d never seen one before and was fascinated. The thing was about 2 feet tall, lanky and long, like a basketball player, with a sort of avian mohawk that made it look slightly crazed, as if it might enjoy banging its head against rocks in its spare time. I’d read that roadrunners hate rattlesnakes and are adept at killing and eating smaller ones. They also like to harass larger rattlers by pecking at their tails. They’re so quick they don’t get bitten. It was one of the few times I’ve wished a rattlesnake would appear.

Another hour passed, and a flock of about a dozen hen turkeys came to the feeder, all bunched up like a single organism with 12 heads. Then a mixed group with three gobblers came in. I was glad I’d made a good blind because they milled around for a while before I picked out the biggest. Thomas came after the shot, saying that he’d killed one too.

“C’mon, let’s see whose is bigger,” he said. I dropped my bird and began undoing my pants. “Not that, you idiot. Whose bird is bigger.” I shrugged. Whatever we were comparing, I didn’t really care one way or the other. I was feeling giddy. The one thing I can say about the feeling of accomplishment that flows from a successful hunt is that I wish it happened more often. Theoretically, a guy could get used to this.

Read Next: Best Turkey Calls for the 2022 Turkey Season

On the way home, Thomas was in a good mood. “That’s what I love about this place,” he said. “I’ve never not gotten my two birds here. And you must have been doing something right. You called yourself in two birds and got ’em both. I think you must be picking this up.”

“I think you’re right,” I said. “I might be ready to go again in another three years.” Turkeys don’t tug at my heart the way whitetails do, but the truth was that the feeling of getting out of the house and going on a road trip with an old hunting buddy was too good to deny. “Seriously,” I said. “We might just have to do this again next year.”

Thomas smiled. Maybe this was my moment. “So how about we listen to some different music for a while?”

“I thought we covered this. I’m driving and it’s my truck,” he said. I was in a good mood. So we compromised, and listened to his music.