This is what an old-school quail gun looks like. Today, if you’re invited to a Southern plantation, or certain Texas... 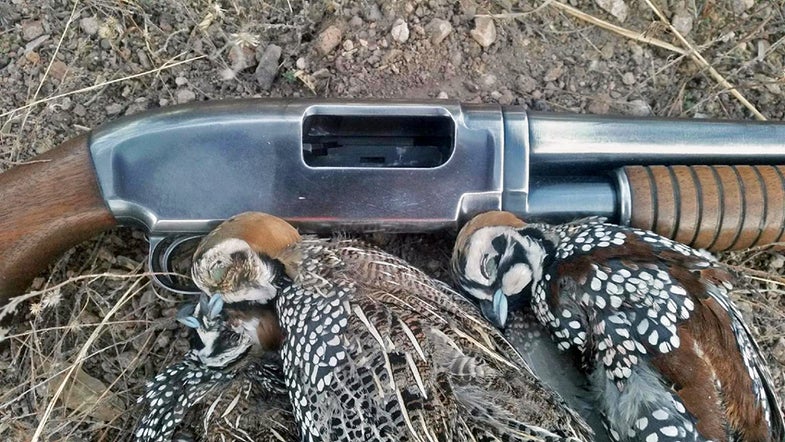 A 20-gauge Winchester Model 12 used to be the go-to shotgun for quail hunters. Phil Bourjaily
SHARE

This is what an old-school quail gun looks like. Today, if you’re invited to a Southern plantation, or certain Texas quail leases, you’re expected to shoot a small gauge over-under or double. It’s not all snob appeal and tradition, either. A couple of good shooters with pumps or semiautos can shoot a covey down too low for its own good in a hurry.

It hasn’t been that long, though, when wild quail were everywhere across the South, and quail hunting was the sport of regular guys. The gun to shoot was one of these: a 20-gauge Winchester Model 12. This one has a 25-inch barrel with no choke at all, just a pure cylinder bore for wide open patterns in the brush. It’s a light gun, and with a short, ribless barrel, it is very muzzle light and fast. It’s not an easy gun for the likes of me to shoot, but in the right hands it’s as deadly a gun for quail in the thickets as you can find.

This gun belongs to Chad Smith, a pure Georgia boy from his Bulldogs ballcap to his accent (he calls his dog Belle “Bale”) to his shotgun. It was a gift from Smith’s grandfather to his father in 1946. Like Smith, his father was a dog man, and he hunted birds with it through the good years after the war, and into the bobwhite’s decline as modern agriculture killed off small farms in the South. It has taken a truckload of bobwhites.

Smith’s father gave the gun to him, and the Army moved Smith out of near-birdless modern Georgia to the southwest, where he has hunted Texas bobs and Arizona Mearns for 20 years. The gun is hard at work filling up its second truckload of quail, although it’s on the bench this year, while Smith does a tour in Afghanistan. Here’s hoping he comes back safe and sound for next season.

I was lucky enough to hunt Mearns quail with Smith and his string of dogs in Arizona last February, where I saw the Model 12 in action. I only remember seeing him miss with it once in two days. I have a story about the hunt coming up in a winter issue of F&S, but I’ll tell you now that it rained in Arizona this summer and Mearns numbers are up again. If you have ever wanted to make a winter-time trip to Arizona with your old Model 12 or any other gun, this is the year.