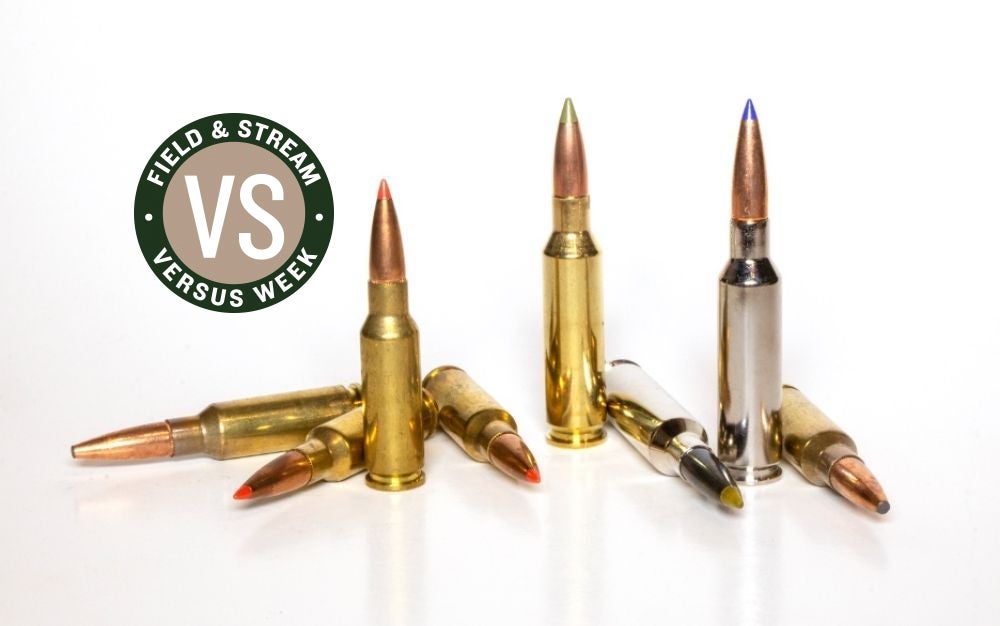 The 6.5 Grendel and the 6.5 Creedmoor are the two most popular 6.5mm cartridges in America. Richard Mann
SHARE

It is popular to compare cartridges against each other. In some cases, the arguments are valid because the cartridges in question are very similar and compete to fill the same roles. In other instances, they are just silly. Since 2014, the 6.5 Creedmoor has risen to stardom at an incredible pace. Not only has it become the most popular of all the 6.5mm cartridges, but it has also become one of the most popular rifle cartridges of all time. Not only that, but the Creedmoor has also given rise to other 6.5mm cartridges, some new and some old.

Recently, shooters and hunters are beginning to question if the 6.5 Creedmoor is the best 6.5mm cartridge for them. Its competitor—the 6.5 Grendel. In some ways the comparison is valid, but in many ways, it is not. While both cartridges can be used similarly in some hunting and sport shooting applications, the two cartridges are not an apples-to-apples comparison. In some ways, it is like comparing a .223 Remington to a .22-250 Remington; both cartridges utilize the same diameter bullet but operate in different power bands.

Of course, the internet and the sporting press are full of articles by devotees of both cartridges and with the information presented in such a biased fashion, it can be hard for the average shooter or hunter to make a choice between the two. Well, I am here to set the record straight. Here is a deep dive into the history, comparison, and difference between the 6.5 Grendel vs 6.5 Creedmoor.

Though it may come as a surprise to many, the 6.5 Grendel has been around longer than the 6.5 Creedmoor. Bill Alexander, of Alexander Arms, worked for several years to develop the 6.5 Grendel and released it in 2003. The cartridge case is based on the 7.62x39mm Soviet cartridge which rose to fame in the AK 47. Alexander simply necked the 7.62x39mm cartridge case down to 6.5mm and blew out the shoulder to eliminate its extreme taper. Then, Alexander did something that would hurt his new cartridge more than help it—he trademarked the name.

The trademark meant that other ammunition companies could not produce ammunition for the 6.5 Grendel without permission from Bill Alexander. This resulted in most ammunition manufacturers ignoring the cartridge. Typically, when a new cartridge is introduced by a manufacturer, it is submitted to SAAMI (Sporting Arms and Ammunition Manufacturer’s Institute), for approval. SAAMI is an organization that establishes the guidelines with which firearms and ammunition are produced. SAAMI is not a government organization, though it was created to act as a governing body to ensure the safety of firearms and ammunition. SAAMI standards are the reason .30-30 Winchester ammunition from 1920 will work in a .30-30 rifle manufactured in 2020.

To the surprise of many, the 6.5 Grendel found a lot of interest even though it was not a SAAMI-approved cartridge. Between its introduction in 2003 and ultimate SAAMI acceptance nine years later, it had become sort of a cult cartridge. It was well appreciated by many who wanted to hunt or shoot at extended range with the AR15 platform. With SAAMI acceptance, Bill Alexander relinquished his federally registered trademark on the 6.5 Grendel, and it quickly went from an almost unknown cartridge to a very popular one.

The ballistics of the 6.5 Grendel were better than just about any other cartridge that was compatible with the AR15 platform at that time. With the ability to launch a 120-grain bullet to almost 2600 fps, the Grendel far outclassed what other current AR15 cartridges, like the .223 Remington or 6.8 SPC, were capable of from a downrange energy standpoint. And, with the high ballistic coefficients associated with 6.5mm bullets, not only did the 6.5 Grendel hit harder at longer distances, but it also shot flatter, extending the 6.5 Grendel’s effective range well on the other side of 200 yards.

In no time, the 6.5 Grendel ammunition was being loaded by various manufacturers and the cartridge was being chambered in various AR15s and even compact bolt-action rifles. In AR15s and compact bolt action rifles, 6.5 Grendel barrel lengths ranged from 16 to 20 inches, providing tactical, practical, and sporting versions of the rifles available in this chambering. Today, a major online ammunition retailer offers more than 15 different loads for the 6.5 Grendel. It is not the most popular 6.5mm cartridge, but it is now mainstream.

For clarity, the 6.5 Creedmoor is often called the 6.5mm Creedmoor. That name is incorrect. It is indeed a cartridge that fires a 6.5mm bullet, which just as with the 6.5 Grendel, equates to a bullet diameter of 0.264-inch. But, the actual and true name of the cartridge, per SAAMI specifications is, “6.5 Creedmoor.”

Depending on the load and barrel length, the 6.5 Creedmoor will launch a 120-grain bullet to about 3000 fps. What is the best barrel length for a 6.5 Creedmoor? Something between 22 and 24 inches is standard, but you can find 6.5 Creedmoor rifles with shorter and longer barrels. However, advertised ballistics for the cartridge is almost always listed with a 24-inch barrel. This gives the 6.5 Creedmoor about a 400 fps (16%) velocity advantage over the 6.5 Grendel. This is possible because it is loaded to 62,000 psi as opposed to Grendel’s 52,000 psi, and because the 6.6 Creedmoor case will hold much more powder.

The “Creed,” as it is often called, is very similar to the .260 Remington, which does have a slight velocity advantage. However, the Creed’s advantage over the .260 Remington is its SAAMI specified twist rate of 1 turn in 8 inches for barrel rifling and ammunition compatibility.

The 6.5 Creedmoor cartridge case was based on the now-defunct and never popular .30 TC cartridge case, which is very similar in dimension to the .308 Winchester. The primary difference between the .30 TC and the .308 Winchester case is length. The .30 TC’s case is a bit shorter, and when necked down to 6.5mm, it can work with the longer and sleeker 6.5mm bullets, but still fit inside the magazine box of short-action bolt-action rifles, or inside a magazine that will fit inside an AR10.

The most common means of comparison between cartridges is with external ballistics. External ballistics account for downrange velocity, energy, and trajectory. If we compare one of the best factory 6.5 Grendel loads with one of the best 6.5 Creedmoor factory loads, we can achieve a very good grasp of what these differences are. To do this, let’s start with velocity.

Kinetic Energy is another consideration of external ballistics and is often thought to offer an expression of the ability of a cartridge to kill game animals. In reality, kinetic energy does not accurately express a cartridge’s or bullet’s ability to kill, that is more an expression of shot placement and bullet construction. However, kinetic energy is a common comparison. And again, comparing the same loads, the 6.5 Creedmoor has the advantage at the muzzle and all the way out to 500 yards and beyond.

The final, and one of the most compared aspects of external ballistics is trajectory. Trajectory deals with how far a bullet will fall below the line of sight at specific distances. Both the Grendel and the Creed are partly popular because they deliver better trajectories than other cartridges of a similar size but that recoil harder. Just as with velocity and energy, when comparing the best loads, the 6.5 Creedmoor has a clear advantage when it comes to trajectory.

These external ballistic comparisons would seem to suggest that the 6.5 Creedmoor is clearly the better cartridge. And, if in fact, all you care about is velocity, energy, and trajectory, it is. However, if external ballistics were the only thing that mattered, the 6.5 PRC cartridge is clearly better than the 6.5 Grendel or the 6.5 Creedmoor. To truly compare the Creed and the Grendel, one should look at these cartridges regarding how they can perform at the specific tasks hunters and shooters will likely use them for.

Though predators are sometimes shot at great distances, it is more common they are called in close, or at least inside 300 yards. At those distances the 6.5 Creedmoor does not have enough of an external ballistic advantage to matter, nor will it kill a coyote any quicker than a 6.5 Grendel. Here the advantage probably goes to the Grendel. This is because the 6.5 Grendel can be had in a lighter rifle or an AR15 that will also offer faster follow-up shots. Unless your hunting will frequently require shots on the other side of 500 yards, the Grendel might be your best choice of these two 6.5s.

For deer-sized game, the same argument could be made for the Grendel. It will handily dispatch deer out to 300 yards, and it will do it with a lighter-weight rifle. In fact, if you have an AR15 chambered for the .223 Remington, you can turn it into a 6.5 Grendel by simply switching to a different upper. But here there is another element that needs to be taken into consideration and that is terminal ballistics. Given a similar broadside shot with a well-constructed bullet, a 6.5 Creedmoor will not kill a deer any deader than a 6.5 Grendel. However, because the 6.5 Creedmoor can fire heavier bullets with better penetration potential, it is a better option if less than ideal shots might be taken, or if the range is going to extend beyond 300 yards. To some extent, reloading the 6.5 Grendel can enhance its effectiveness beyond that of factory ammo, but it will never hit as hard as the 6.5 Creedmoor.

Can you effectively use a 6.5 Grendel on game larger than deer? For sure. However, it is probably best regulated for game weighing less than 400 pounds or so. With Grendel ammo, the heaviest weight bullet is typically 123 grains. With the 6.5 Creedmoor, there are bullets that are 16% heavier and specifically designed for deep penetration. When it comes to the 6.5 Creedmoor for hunting, especially large game, it is not the best of the 6.5mm rifle cartridges, but it is better than the 6.5 Grendel.

When it comes to the 6.5 Grendel vs 6.5 Creedmoor, you cannot really select a winner until you have stipulated what specific tasks are begin compared. No question, the 6.5 Creedmoor is the more powerful cartridge, but power is only one consideration. To select the best cartridge, you must make comparisons based on what you want to do with the cartridges in question. Having the most powerful cartridge does not always mean you have the best cartridge.