The Barnett Whitetail Hunter STR crossbow punches far above what its price tag suggests, delivering premium performance at nowhere near a premium cost. 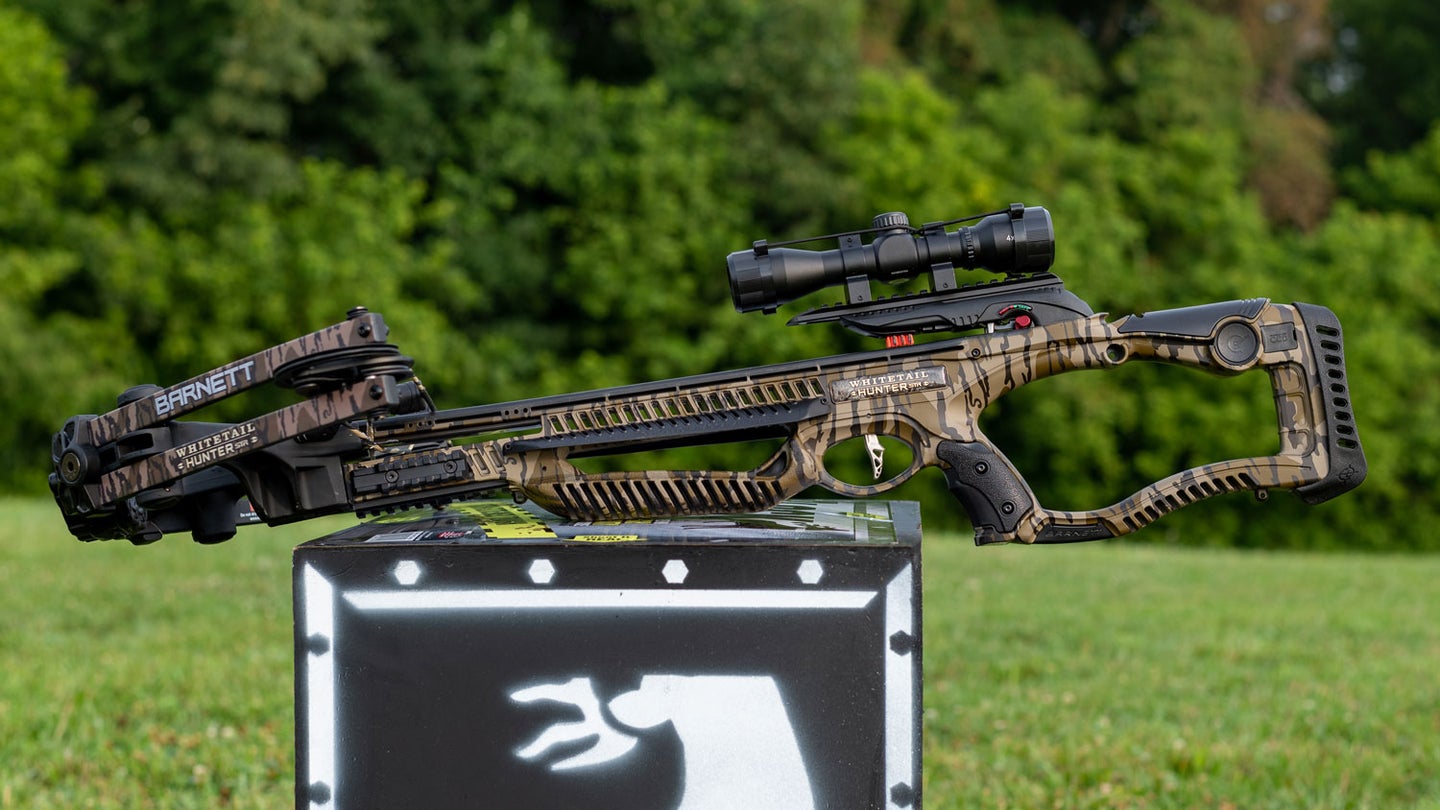 Barnett’s Whitetail Hunter STR may prove to be one of the best crossbows for hunting that the company has ever produced, as it features a long list of pros with very few cons at an incredibly low price. Taylor Pardue
SHARE

The Barnett Whitetail Hunter STR crossbow continues the proud tradition started by other models in the company’s Whitetail Hunter series while also building a reputation of its own. This is a value-packed hunting rig, one that could help you introduce new hunters to the sport without breaking the bank for new hunting gear.

Barnett’s Whitetail Hunter STR may prove to be one of the best crossbows for hunting that the company has ever produced. Cabelas

What Kind of Crossbow Is the Barnett Whitetail Hunter STR?

The Barnett Whitetail Hunter STR is perfectly suited for chasing its namesake game animal. This could be one of the best crossbows for deer hunting on the market today, as it offers a blend of accuracy, speed, and maneuverability that you might not expect given its asking price. The Whitetail Hunter STR measures just under 35 inches, weighs 6.6 pounds, and comes with a built-in/step-through riser. It also sports anti-dry-fire technology, finger safety wings, a patented Soft-Lok floating bristle arrow retainer and a TriggerTech trigger.

The Whitetail Hunter STR simply begs to be taken afield in pursuit of deer. I think it would also make for a great beginner’s crossbow, as it is priced under $500 and is lightweight.

How We Tested this Barnett Crossbow

I shot my test model through a chronograph using the 22-inch Headhunter carbon arrows and 100-grain field points that shipped with the crossbow. My digital arrow weight scale put the total arrow weight at 400 grains. My trigger pull scale gave a reading of 4.5 pounds.

After obtaining those initial measurements, I placed a Block foam target in an open field and then took several shots at 20, 30, 40, and 50 yards. Given the Barnett crossbow’s name, it seemed fitting to take aim at the deer silhouette side of the target. I used a Primos Trigger Stick Gen 3 tall tripod to steady the Whitetail Hunter STR.

While it may not be the fastest crossbow on the market today, my testing of the Whitetail Hunter STR resulted in an average — and very consistent — arrow speed of 370 fps. Barnett says that the Whitetail Hunter STR can achieve speeds of up to 375 fps, but that reportedly comes when using a 380-grain arrow. The Headhunters I used were a bit heavier, thus giving me slightly slower speeds.

I would have shot both of the arrows Barnett includes with the Whitetail Hunter STR several times at each yardage, but I managed to bust the nock and crack the shaft of one with the other while finishing sighting the crossbow in at 20 yards. That, I suppose, says something for the crossbow’s accuracy in and of itself. However, being down to just one arrow forced me to focus on each shot and truly make it count, just like I would have had to do if I were using the Whitetail Hunter STR during hunting season.

Once I got used to the 4x32mm multi-reticle Halo Optics scope that the Whitetail Hunter STR comes equipped with (more on that later), I was able to hit the “vitals” on the Block target’s deer silhouette at every range I tried — heart at 20, 30, and 40 yards, lungs at 50. I’m sure others could put the crossbow to even better use, but remember, this is an image of a deer that fits on the side of a Block, not a life-size deer target.

The Barnett Whitetail Hunter STR I tested came with a standard rope cocking device. Cocking the crossbow was easy enough, with no problems encountered.

I didn’t notice much in the way of noise and vibration when shooting this crossbow — it isn’t silent or vibration-free, of course, but there wasn’t anything noteworthy. The Whitetail Hunter STR comes equipped with a string-dampening system, which I appreciated, but I can’t say how effective it was since I didn’t shoot the crossbow without it installed for comparison. If nothing else, the system adds uniformity to each shot and reduces some vibration by simply stopping the string at the same point on the rail time after time.

The Barnett Whitetail Hunter STR seemed a bit long to me at just under 35 inches, but when paired with such a light weight, the length actually proved to be an asset. I was able to fully control the crossbow without it feeling whippy in my hands. That maneuverability would certainly prove useful when moving the crossbow around for a shot in a treestand.

The Barnett Whitetail Hunter STR is clad in Mossy Oak Bottomland camouflage. It’s a proven pattern that will work most anywhere, and it’s on the darker side, which could come in handy if you’re trying to blend into the shadows of a ground blind. The three short Picatinny rails on the front of the forend — one on each side and another on the bottom — are perfect for mounting accessories such as the included quiver. I also liked the slits cut into the forend. These were no doubt made to reduce the crossbow’s weight, but they also add texture.

I didn’t measure the length of pull on this Barnett crossbow, but it seemed to be on the short side. I found myself having to adjust my face on the cheekpiece a few times, but that may just be me.

What the Barnett Whitetail Hunter STR Does Best

I was impressed by how fast the Barnett Whitetail Hunter STR was. There are certainly faster crossbows out there, but 370 fps is plenty flat shooting for me. And what can I say about the TriggerTech trigger that those who are familiar with the company don’t already know? My test model’s trigger was incredibly crisp, and it is straight rather than curved. Straight triggers are great when you’re wearing gloves in the late season, which is when I do most of my crossbow hunting.

The Whitetail Hunter STR is lightweight, accurate at what I feel are ethical hunting distances and beyond, and a bargain to boot. If I had a kid, it would be high in the running for their first hunting crossbow.

What the Barnett Whitetail Hunter STR Does Worst

The safety wings are very useful as-is, but they are short and curve down at the ends. I could certainly get used to that, but I think I would enjoy shooting the crossbow a bit more if they stuck straight out and were a little wider.

I was disappointed to find that Barnett only ships the Whitetail Hunter STR with two arrows instead of three. You could easily buy additional arrows with the money you’ll save on this crossbow over many of its competitors, but most of the field comes with an added arrow. Busting that nock/splitting that arrow shaft made my review a bit challenging.

The Whitetail Hunter STR’s scope is good, but the reticle lines aren’t set for specified yardages. Instead, you sight in at 20 and then must find out what yardage each line represents for your given setup — i.e., you shoot at farther and farther ranges until you find which one fits each line. I would opt for a speed-calibrated scope instead if I was going to hunt with the Whitetail Hunter STR, just to avoid any miscalculations during a hunt.

Does this Barnett Crossbow Deliver on its Mission?

I tested the Barnett Whitetail Hunter STR without checking its MSRP first. After I finished, I felt sure that the Barnett crossbow would cost somewhere in the $700 to $800 range, which I would still believe represented a tremendous value. Imagine my surprise when I learned that it actually retails for under $500!

Simply put, the Barnett Whitetail Hunter STR is fast, lightweight, accurate, and cheap — perfect for someone who wants to buy the best crossbow they can for the best price possible.