The Ethos Cordoba BE.S.T. is a high-end shotgun that's ideal for high-volume dove hunts. But how does it stack up as a waterfowl gun? 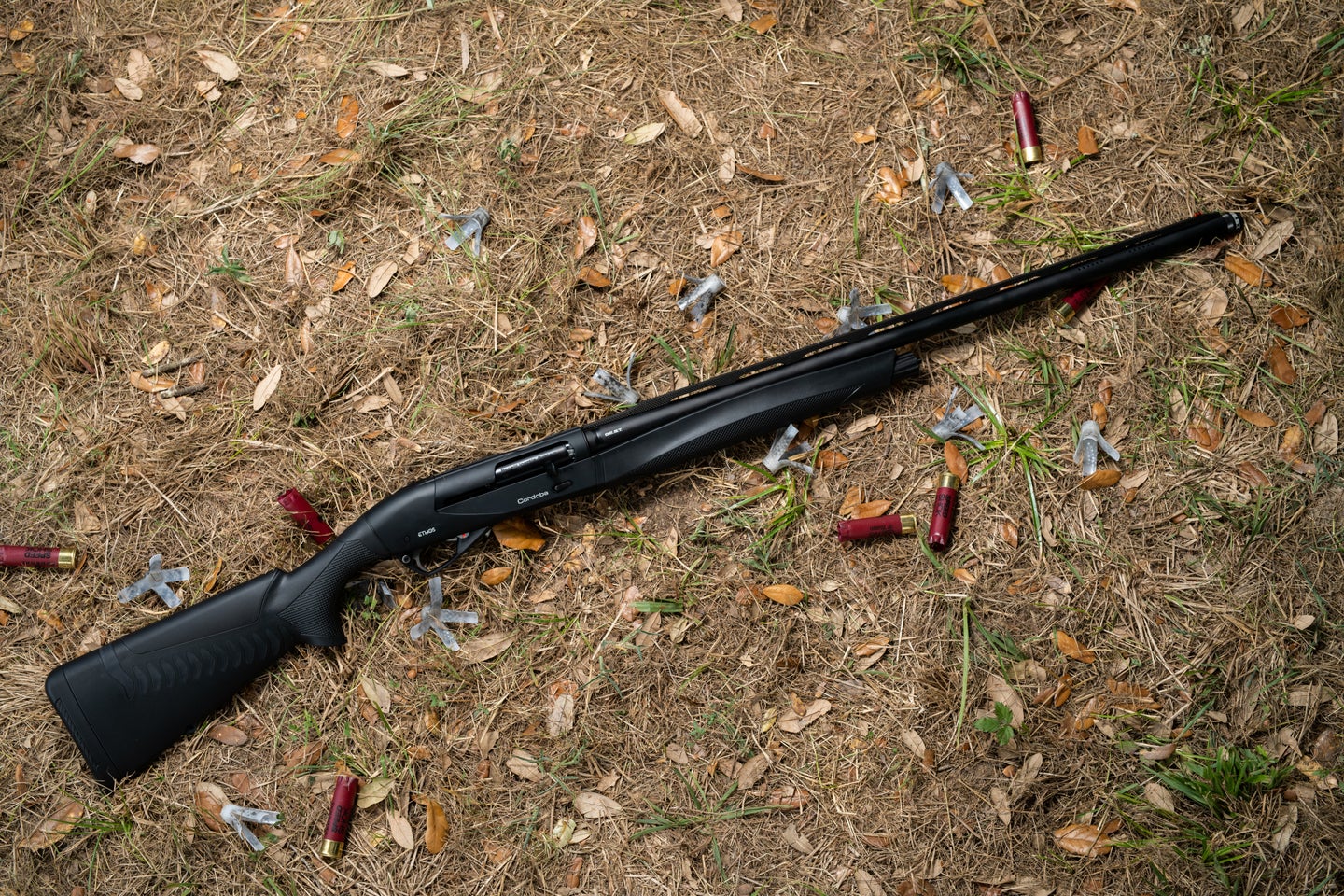 Benelli inertia semiautos earned their reputation for shooting reliably forever in the dove fields of South America. The Cordoba province of Argentina is to dove shooting what Stuttgart, Arkansas is to mallards, and it’s only fitting that Benelli named their high-volume dove gun after the dove capitol of the world. Inertia guns are simple, they stay cleaner longer, and when they do get dirty, they keep on shooting. Those are essential qualities in a high-volume dove gun, and they are good traits in a waterfowl gun as well. Benellis have become extremely popular among duck and goose hunters who may never leave the United States.

Our test team chose the new Ethos Cordoba BE.S.T. as one of the guns to put through the wringer in our waterfowl gun test last September at Pintail Hunting Club in Garwood, Texas. Benelli had a Cordoba in their lineup for several years, but discontinued it, then brought it back as a different gun as part of the Ethos line.

The idea behind the Cordoba configuration is simple: This is a gun made to be shot a lot—at doves or clays or ducks or all of the above. It’s intended customer is the world-traveling high volume shooter, but those of us who do most of our hunting around home might be interested in it, too.

Inside the Benelli Ethos Cordoba BE.S.T.

Like all Benelli semiautos, with the exception of the tactical M4, the Ethos Cordoba BE.S.T. operates on the inertia system. The heavy, two-piece rotary, floating bolt remains stationary as the gun moves back under recoil, and actually locks tighter due to the rearward motion of the rest of the gun. A spring inside the bolt compresses, then opens, driving the bolt back after the shell fires. The advantage of inertia operation over gas is that no gas is bled from the barrel to drive the action, so it stays cleaner of powder residue. And, because there are no gas pistons or springs around the magazine tube, the gun has a pleasingly slim forend that makes it feel more like a trim O/U than a semiauto.

The Ethos Cordoba BE.S.T. design solves one of the few problems of inertia operation: Because the bolt doesn’t actually lock up completely until the gun recoils, it’s possible to jostle the gun and knock the bolt out of battery, resulting in a misfire. The Ethos was the first Benelli gun to feature the Easy Locking bolt that eliminates out-of-battery misfires by means of a simple detent pin. The SBE3 is the only other gun in the Benelli lineup with the Easy Locking bolt.

The Ethos has a two-piece receiver that makes it resemble the SBE3, but it is not just a 3-inch SBE 3 with a different name. It has a ported barrel to reduce muzzle jump, a wide “Broadway”-style target carbon-fiber rib, and the forend has a clear plastic insert that lets you peek through cuts in the magazine tube to see how many shells you have left. It’s a feature developed for South American dove fields where you can easily lose track of how many shells you’ve fired. It also come with five extended Crio chokes.

The gun also has an enlarged bolt handle and bolt release button as well as a cutaway loading port, features that are essential for comfortable high-volume shooting and come in handy at the gun club or in the blind as well. The Ethos Cordoba BE.S.T. also features the ComforTech stock that dampens recoil vibration while a soft comb insert eases the blow to your cheek from high volume shooting, or from magnum duck loads.

The gun gets part of its name from the Benelli Surface Treatment (BE.S.T.), essentially a high-tech graphite treatment that provides rust and abrasion protection and has been tested in high-saline environments. Benelli is confident enough in BE.S.T. that it comes with a 25-year guarantee, and they have tested the gun in salt both in the lab and on grueling Alaskan sea duck hunts. Unlike some of the gun’s more high-volume specific features like the shell view, the BE.S.T. treatment is tailor-made for all duck hunters and should be of special interest to those who hunt on the coast. The sling swivel studs, too, are more important to waterfowlers than they are to most dove hunters.

How We Tested the Ethos Cordoba BE.S.T.

We gave the Cordoba Ethos BE.S.T. the best workout we could during the morning teal hunts. And, while the teal flew in numbers that resembled swarms of doves in South America, we had to stop at six teal, so the Ethos Cordoba BE.S.T. wasn’t even breathing hard at the end of a morning hunt. To make up for it, we shot it at clays in the afternoons. We checked it for function and reliability, and tried to bump the Easy Locking bolt out of battery. (Spoiler: We couldn’t.)

We shot the Ethos Cordoba BE.S.T. with a variety of ammunition, from 1-ounce target loads to 1 ¼-ounce steel and steel and bismuth HeviHammer ammunition. We put hundreds of rounds through it and didn’t experience any malfunctions or other problems. At 35 yards with a Modified choke, the gun put 82 percent of a 3-inch, 1 1/8-ounce, 1550-fps Federal Speed-Shok shell inside a 30-inch circle. When we tested for point of impact by aiming the gun at a sheet of paper also at 35 yards, the center of the pattern printed several inches high.

Like all Benellis, the Cordoba Ethos BE.S.T. is trim and light. In fact, our 12 gauge with a 28-inch barrel weighed just 6 ½ pounds, which is no heavier than many 20 gauges. If you’re trying to shoot 1,000 doves a day, you’re raising your gun to your shoulder almost constantly—so you want a light gun that won’t tire your arms. But, there are tradeoffs to light weight. When you shoot a steady diet of 3-inch shells through a lightweight 12-gauge inertia gun, you feel it. Sure, the Ethos Cordoba BE.S.T. has a soft comb and buttpad and vibration-reducing chevrons in the stock and ports in the barrel. They help, but while you can cheat the laws of physics, you can’t change them, and light guns kick more than heavier guns.

We also found it wasn’t quite as easy to swing smoothly on the longer shots with the light Ethos Cordoba BE.S.T. as it was with heavier guns. And, to my way of thinking, the lightweight carbon fiber rib cuts weight up front, which is where more weight—up to a point—helps a gun’s dynamics. The controls, all designed for marathon dove shoots, made the gun a pleasure to load and operate, and as I said, try though we might, we couldn’t make the gun misfire.

All Benellis have sleek, modern, racy lines, and the Ethos Cordoba BE.S.T. is no exception. Although human hands have very little to do with the making of Benellis, as I saw during my visit to the factory a few years ago, the robots and machines that build these guns work to minuscule tolerances. The gun is good-looking, in a non-traditional way, and the quality of the fit and finish is excellent.

While the gun is purpose-built for high volume doves, there is absolutely no reason the Ethos Cordoba BE.S.T. couldn’t also serve as a waterfowl or upland shotgun. It’s light enough to carry, yet all three gauges, including the 28, are chambered for 3-inch shells, so you can shoot waterfowl loads out of it. It’s reliable, and the BE.S.T. coating means it can stand up to any environment, including salt water.

Although you could shoot targets with it in a pinch, the gun’s light weight would make it hard to shoot well, and that weight, combined with inertia operation would make it recoil harder than a heavier gas semiauto. Our test gun had a 28-inch barrel, and I would be tempted to choose the longer 30-inch barrel for a little extra weight forward balance.

Benellis are known for reliability. Inertia guns work in bad conditions and they don’t get as dirty as gas guns do. South American outfitters tell me you have to keep the firing pin hole in the breech face clean, but other than that, the gun will shoot a long time with minimal cleaning. The Easy Locking bolt does away with the main aggravation of shooting inertia guns, which is the misfire when the bolt is nudged out of battery. Moreover, the BE.S.T. and the synthetic furniture means this is a gun that will withstand the elements and keep shooting.

It’s not easy to spin the Ethos Cordoba BE.S.T. as a great value. There are other inertia semiautos on the market featuring Cerakote (maybe not as good as BE.S.T., but also durable) that cost quite a bit less money than this gun. If you want the very latest in semiauto technology, this might be a good gun for you to look at. And, it’s certainly not a gun you’re going to wear out anytime soon, so your initial investment might be spread out over two or three generations. Bottom line, though: If you’re in search of bang for the buck, there are other good, and much less expensive, choices.

What the Benelli Ethos Cordoba BE.S.T. Does Best

The Ethos Cordoba BE.S.T., as its name suggests, is the gun you want to take to South America and shoot all day long. It’s made to load easily, and to strike a balance between being light enough to lift several hundred times a day, but also to mitigate some of the recoil of all that shooting. If you’re a traveling wingshooter that wants a reliable, durable gun to take around the world with you, this gun fits the bill.

Perhaps I am too set in my ways, but if I’m shooting clay targets with a semiauto, it’s going to be a heavy gas gun, not a lightweight inertia model. You could shoot trap, skeet, and sporting clays with this gun—it’s certainly durable and reliable enough—but in my opinion you’d be limiting yourself. Also, the gun shot high for us, so I’d be unlikely to stretch its versatility too far by taking it turkey hunting. Honestly, the high point of impact didn’t bother me in the least shooting ducks or targets, but I prefer a gun that hits dead on.

The Benelli Ethos Cordoba BE.S.T. has almost every bell and whistle you can put on a semiauto shotgun, and the result is a very durable, reliable hunting gun. Some of the features, like the shell view window, you would only use in an Argentine dove field, but others, like the Easy Locking bolt and the BE.S.T. treatment, help make this a rugged, reliable shotgun you can take anywhere and hunt almost anything with.