Beretta A400 Xtreme Plus: Tested and Reviewed

The A400 doesn't come cheap—but it's a reliable, durable, and vesatile semiauto. It's also our pick for the best waterfowl shotgun on the market 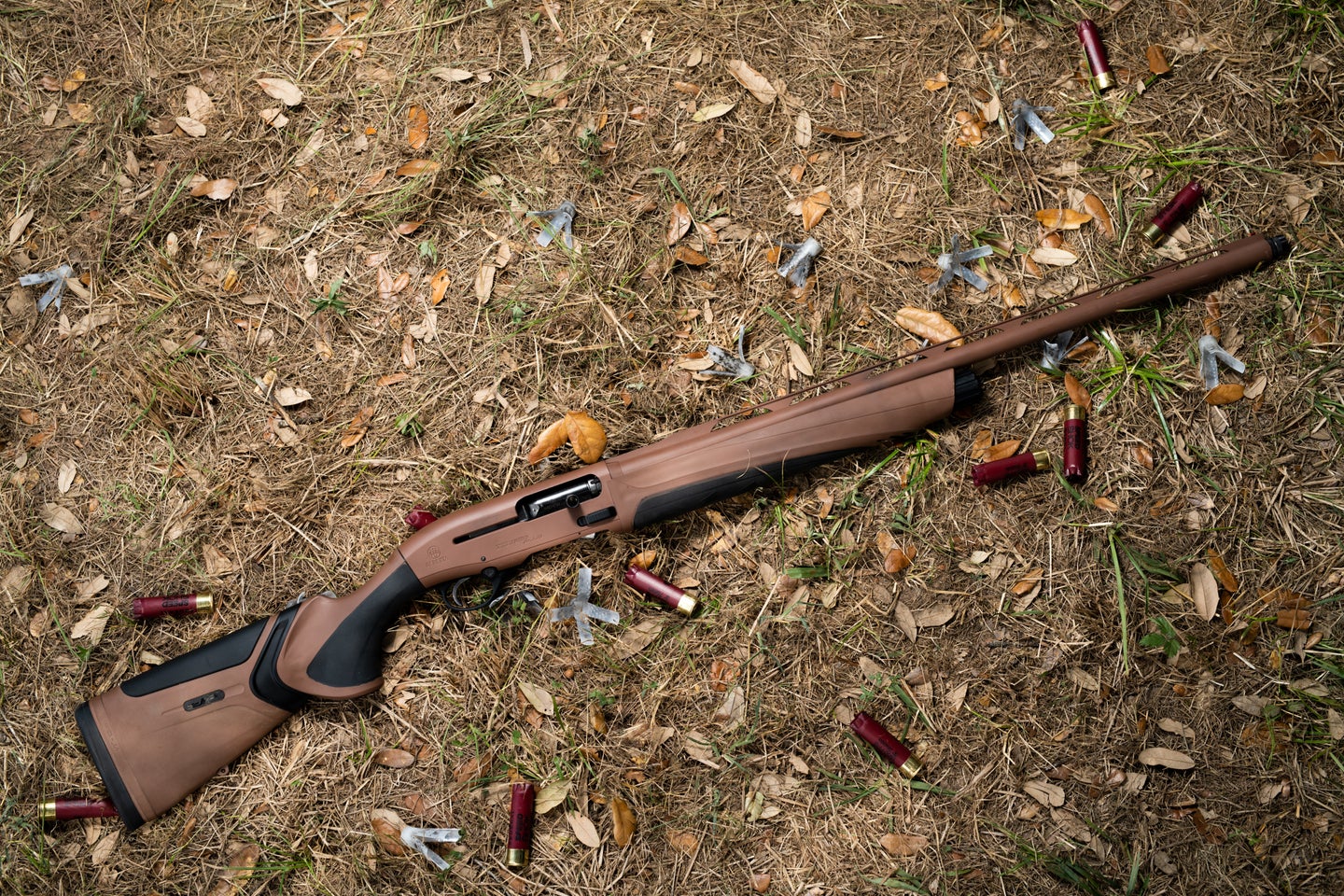 The A400 Xtreme Plus won our duck gun test. Stephen Maturen
SHARE

Our waterfowl gun test came down to a shootout between two well-known, high-end Italian semiauto shotguns. When the last shells was fired, the Beretta A400 Xtreme Plus edged out the Benelli Super Black Eagle 3 as the best duck hunting shotgun in our test.

The A400 Xtreme Plus is the latest in a long line of excellent gas-operated semiautomatics from Beretta stretching back to the A300 of the late ’60s. This waterfowl configuration of the A400 is a reliable, soft-shooting gun that deserves consideration from anyone shopping for a new duck gun. It’s not cheap, but it delivers outstanding performance for those that take their duck hunting seriously.

The A400 series replaced the Beretta 391 12 years ago and has gone on to establish itself as one of the most versatile, reliable gas semiautos of all time. The ability to cycle almost any load from the very lightest 2 ¾-inch target ammo up to 3 1/2-inch goose and turkey magnums with manageable recoil make it suitable for all types of wingshooting.

Beretta offers several 12-gauge versions of the gun for upland and waterfowl hunting and for target shooting, as well as 20-gauge models. The A400 Xtreme Plus is Beretta’s entry into the top-of-the-line 3 ½-inch 12-gauge waterfowl semiauto category. It’s gun intended for serious waterfowl hunting, but with the versatility to serve as an upland, target, dove, and even turkey gun as well. As Beretta’s “flagship” semiauto, it is a direct competitor to the Benelli Super Black Eagle 3, the Browning Maxus II, and the Browning A5, all of which carry price tags barely under $2000.   All four of those guns were among the pile that we took to Pintail Hunting Club in Garwood, Texas, last September for our waterfowl gun shootout.

Nuts and Bolts of the A400 Xtreme Plus

Specs on the Beretta A400 Xtreme Plus:

With a rotary bolt and return spring on the magazine tube instead of in the stock, the A400 actually bears a close resemblance to Beretta’s first 3 ½-inch semiauto, the well-regarded Xtrema and its successor, the Xtrema 2. Beretta added a new split-ring valve that not only makes the gun cycle faster—which is not terribly important – but makes it run much cleaner by reducing the amount of expanding gas entering the piston chamber. The result is a gun that will shoot a long time between cleanings, and that is a big deal.

Gas-operated semiautos have the advantage of reducing felt recoil by storing, then releasing, recoil energy in the moving parts of the gun, such as the bolt. By breaking the recoil impulse up into several smaller jolts and spreading them out, gas guns are more comfortable to shoot than other types. Beretta adds to the A400’s recoil reduction with its Kick-Off Mega system, which features a shock absorber in the stock, a soft cheek pad, and a buffer to absorb the secondary recoil of the bolt as it slams into the back of the receiver.

To improve patterning the A400 has a barrel bored slightly larger than the nominal .729 of the 12 gauge and a lengthened taper from chamber to main bore. Beretta added a raised rib to this version, too, which many hunters prefer over a lower rib as a sighting plane. The gun comes with an enlarged bolt handle and bolt release as well as larger loading port to make it easier to use with cold hands or gloves. It has a large safety button, too, that’s easy to find and it reverses for left-handers. There are also left-hand models available with left-side ejection to keep hulls from flying across left-hander’s vision and powder flakes out of their eyes. The trigger broke at 5.1 pounds, which is a good pull for a shotgun.

The magazine cap is a neat feature of the A400 Xtreme Plus. Instead of unscrewing it to take it off, you push it down like a childproof cap, and give it a half turn, and it pops off. The inside is made of bright, neon-green plastic to help you find it if you take your gun apart in the blind and drop the cap in the water.

The gun is easy to maintain, too. The bolt, action spring, and links all come out in one piece after you remove the bolt handle and the barrel, making this gun a snap to strip down and clean.

How We Tested the Beretta A400

No wants to spend $1,700 on a semiauto that gives them trouble, so we evaluated the A400 by shooting it a lot at five-stand, and as much as we could at teal during three morning hunts. It cycled 1-ounce target loads with no problem as well as 1 ¼-ounce steel and steel and bismuth HeviHammer ammunition. The four of us on the test team put hundreds of rounds through the gun during our stay and I don’t remember a single malfunction. Felt recoil was very mild, thanks to the gas action, the Kick-Off Mega system, and the gun’s 7.8 pound weight.

We patterned the gun from a Lead Sled at 35 yards with hunting loads and the included Extended Light Modified choke. It printed a 60/40 pattern which is slightly above point of aim, but many hunters prefer a gun that shoots just a little high. The patterns with Federal Speed Shok 3-inch, 1 1/8-ounce, 1550 fps loads of 2 shot produced a very good, uniform 78 percent pattern that would cleanly take a duck or goose.

How the Beretta A400 Performed in Our Test

There’s no question that the A400 is a handful—literally. It’s a bulky gun, and shooters with small hands may not like the fat grip and forearm or the safety button located at the front of the trigger guard if they have short fingers. It was the heaviest of the top-of-the-line semiautos, too, but I found that the bulk and weight made it an easy gun to shoot. That weight was well-distributed, with the 28-inch barrel providing a little bit of weight forward balance to help this gun flow to the target. I had no trouble hitting teal or clays with it, and the rest of the test team shot it well also. The guns are also available with 26- or 30-inch barrels, and the latter would be my choice for a dedicated waterfowl gun, plus it would make an excellent clays gun.

The A400 is a solidly well-made gun. Although it’s hard to evaluate a synthetic-stocked gun for workmanship, some synthetic guns can look and feel cheap. The A400 does not. And, despite its bulk, it’s a good-looking gun, especially with the new raised rib that gives it a racy profile. The rubber grip panels and comb pad contrast with the gun’s finish (our gun had an aftermarket solid-color finish, but production models come in a variety of camo patterns and black). Everything on the gun works as it should, too.

Although the A400 Xtreme Plus is marketed as a waterfowl gun, it has a drilled, tapped receiver so you can fit it with an topic for turkeys. It’s on the heavy side for an upland gun, but if you’re one of those who like to shoot fast, heavy lead loads at pheasants, you’ll appreciate the gun’s weight and the Kick-Off Mega. Likewise, the A400 Xtreme Plus would make a fine clay gun in a pinch. In fact, while I find enlarged bolt release buttons to be a pain in the field (they work too well and it’s easy to bump them and close the gun) they are almost essential on a target semiauto. Although purpose-made for waterfowl, the A400 Xtreme Plus could work as an all-around gun if you don’t mind the weight. There is an A400 Light model if you’re more interested in upland hunting with a little waterfowling thrown in, though.

We couldn’t come close to making the A400 Xtreme malfunction. That would take another thousand, or probably two thousand, rounds or so without cleaning. There’s a reason that the overwhelming number of sporting clays competitors who shoot semiatuos choose Berettas. The A400 Xcel, the target version of this gun, is a common sight at gun clubs, and its blue receiver makes it easy to pick out in any gun rack.

The A400 Xtreme Plus is a value if you subscribe to the “buy once, cry once” theory that stretching to spend for the best saves money in the long run. No one will call a semiauto that starts at $1,899 a budget gun, but this is definitely a gun that gives your money’s worth in terms of low-recoil and reliability.

What the A400 Xtreme Plus Does Best

What this gun does best is put waterfowl loads on target with minimal recoil. It’s a gun made to be at home in a duck or goose blind where its weight and bulk are an advantage. Because it cycles light 2 ¾-loads so well and with so little kick, it’s also a good choice for dove hunting, summer skeet league, or sporting clay practice.

What the A400 Xtreme Plus Does Worst

The A400 is a lot of gun, especially when compared to the slimmer, lighter top-of-the-line semiautos we compared it to in the test. As such, it’s not the ideal gun to carry for miles in the uplands, nor for running and gunning for turkeys. Shooters with small hands might not like it, either. We did find its bulk and weight made it easy to shoot, however.

Final Thoughts on the Beretta A400 Xtreme Plus

Top of the line semiauto shotguns represent a significant investment, and it’s important to make the right choice.  The low recoil of a gas gun makes it a great choice for waterfowlers who often shoot heavy loads, and if a gun that’s comfortable to shoot is the best duck hunting shotgun for you, then the A400 Xtreme Plus is worth a look. No other gun in the test matched its low recoil. The Kick-Off Mega system really works. The A400 Xtreme Plus is about more than low recoil, though. It’s easy gun to shoot, it patterned well and shot to point of aim, and it carries on the legacy of Beretta semiuatos as the most reliable of all gas guns. Those traits all helped it win the title of best overall gun in our waterfowl gun test.