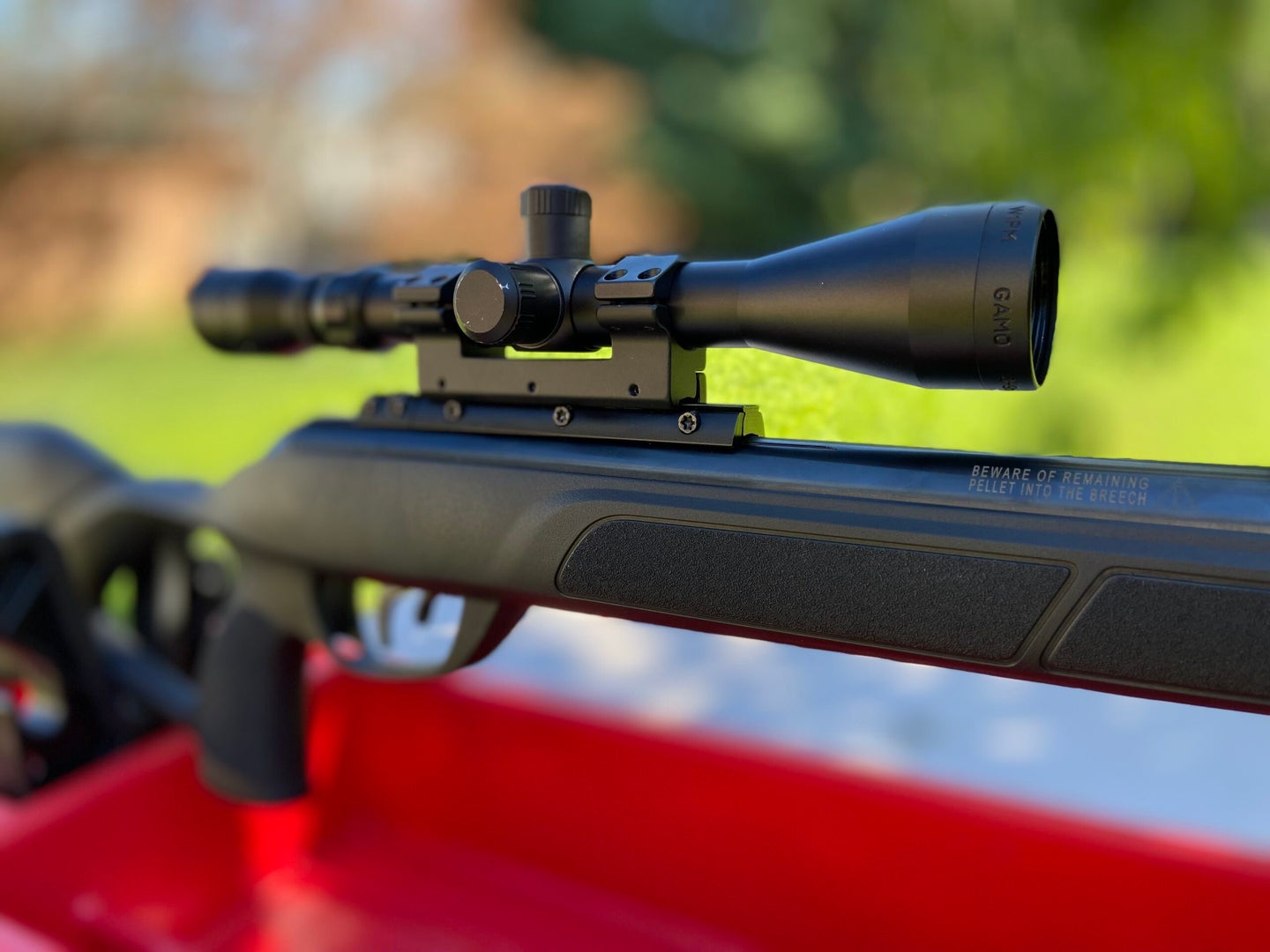 The author put the Gamo Swarm Fusion 10x GEN2 through its paces when making his review. Mark Taylor
SHARE

Gamo has updated its popular Gamo Swarm Fusion 10X, with the new version building on the rifle’s reputation as an innovative, accurate, relatively quiet and powerful workhorse. Deemed the GEN2, the new Swarm Fusion 10X features Gamo’s unique horizontal magazine, which has been upgraded to be more reliable than the original (which was, itself, quite reliable).

What Kind of Air Rifle is the Gamo Swarm Fusion 10X GEN2?

This rifle is designed for sporting use. With its ample power, solid accuracy, and self-contained power plant, it excels for pest control and as a small-game hunter. The self-loading magazine also speeds up follow-up shots.

The Gamo Swarm Fusion 10x GEN2 comes with fiber optic open sights. Our test rifle came as part of a package that included a 3-9×40 mm scope with a fixed parallax set for 25 yards. Rings for the 11 mm rail were, obviously, included.

The stock is a single-piece black nylon with checkering on the pistol grip and forearm and a comfortable pistol grip. Weight for the full package was right at eight pounds.

The Gamo Swarm Fusion 10X GEN2 air rifle is a break-barrel rifle, with only a single cocking stroke needed to ready the gun for firing. Traditionally, a spring is at the heart of a break-barrel gun’s power plant, but the Gamo Swarm Fusion 10X GEN2 uses a piston powered by compressed nitrogen gas. The cocking stroke compresses the gas. Pulling the trigger lets the piston move freely again, and it propelled at great speed by the rapidly expanding gas. This sends the piston through the air chamber and creates the blast of air that pushes the pellet down the barrel.

The cocking stroke that produces the power also automatically feeds a pellet into the barrel from the 10-pellet magazine. Recoil causes the magazine to rotate, readying another pellet to be loaded with the next cocking stroke.

How I Tested the Gamo Swarm Fusion 10x GEN2?

I tested the Gamo Swarm Fusion 10x GEN2 by shooting several hundred pellets over the course of six weeks. Most of the shooting was at 25 yards in my yard, but I also took the gun to my range to test it out to 50 yards.

It’s sometimes said that spring-piston guns can require a break-in period of 500 to 1,000 shots. Break-in times aren’t as significant for gas piston guns, but it is likely this rifle will shoot even better than it does already after several hundred more rounds and a thorough barrel cleaning.

Break barrel rifles are appreciated for their simplicity. There is no need for separate air tanks or CO2 canisters, nor a risk that you will run out of air while in the field. The 10X GEN2 magazine system does add a layer of complexity but not a significant one.

Gas piston systems have some advantages over spring piston systems. A notable one is a reduction in recoil, which is particularly noticeable in magnum-powered guns. After all, producing high velocities requires powerful springs. Releasing those springs creates quite a jolt. Hence, springers can be a little tricky to learn to shoot accurately. (And can also wreak havoc on scopes not designed for the unique “double” recoil that spring piston power plants produce.)

Gamo reports that the cocking stroke requires just over 42 pounds of effort, which is pretty stout. I had to brace the butt to cock the rifle. My petite-but-athletic college-age daughters weren’t able to cock the gun at all. But Gamo claims that the nitro piston system in the Swarm Fusion 10X GEN2 reduces recoil up to 70 percent from a comparably powerful spring piston rifle.

Having enjoyed the simplicity of break barrel air rifles for decades I was, admittedly, wary of the 10-shot magazine system. Why over-complicate a tried-and-true system? But I was pleasantly surprised by how well the 10X GEN2 system worked and quickly gained an appreciation for being able to shoot 10 shots relatively quickly without having to fumble with pellets between shots.

It’s possible to load the magazine while it is in place, but it’s easier to pop it out for loading. The magazine holds — you guessed it — 10 pellets. A thin rubber O-ring grips pellets between the dome and skirt to keep them from dropping through when they are loaded. I found that shorter pellets needed a little nudge to get the dome past the O-ring. The short pellets were inexpensive and lightweight pellets that didn’t group well so this was a non-issue for me once I ruled out those pellets.

The rifle comes with only one magazine so it would be wise to invest in a second or third in case of loss or if there is an issue with the pellet-grabbing O-ring, which could be at risk for wear failure eventually. It’s possible to manually load a single pellet if necessary.

The Gamo Swarm Fusion 10X GEN2 features a two-stage adjustable trigger. Small screws in the trigger assembly allow for adjusting the length of the first and second stages, but not the weight of the actual trigger breakpoint. The rifle comes from the factory with a 50-50 setting. After experimenting with others, I went back to that setting, which worked well for me.

After testing with a variety of pellets, it was clear that this rifle prefers heavier pellets. This is not surprising given the power of this .22 air rifle. I didn’t test alloy pellets, but 13-grain department store pellets could do no better than 2-inch groupings at 25 yards. That may be acceptable for plinking, but it is not suitable for hunting. The trade-off for a higher velocity is simply not worth the cost to accuracy. The best pellets I found for accuracy were the 15.4-grain Gamo Red Fire pellets that were included in the package. H&N Baracuda Match (21.14 grains) pellets were nearly as good. Find a good pellet and stick with it.

Shooting off a bench with a single rest for the forestock produced consistent three-quarter to half-inch groups at 25 yards and 1- to 1.5- inch groups at 50 yards. I shot my extremely accurate Benjamin Marauder .25-caliber pre-charged pneumatic alongside the Gamo one day at the range and, while the M-rod was slightly more accurate at 25 yards, the two rifles grouped similarly at 50 yards. In short, while this isn’t a gun for target competition, this Gamo air rifle is plenty accurate for hunting and field use.

The Gamo Swarm Fusion 10x GEN2 air rifle is available as either a .177 or .22 caliber air rifle. Our test gun was a .22. Gamo notes that the .177 version is capable of muzzle velocities of 1,300 feet per second using lightweight alloy pellets. The .22, which Gamo states can shoot alloy pellets at 1,000 fps, consistently produced chronograph-measured speeds of 890 to 910 fps with lead pellets in the 15-17 grain range. That puts the muzzle energy at approximately 30-foot pounds, which is more than sufficient for pest control and small game hunting.

Our test rifle featured a polymer shroud on the end of the barrel. New models feature fully shrouded barrels. Although the rifle is not very loud it might be a bit much for small yard shooting, especially if neighbors are really close.

What the Gamo Swarm Fusion 10x GEN2 Does Best

The Game Swarm Fusion 10 GEN2 excels for air rifle hunting and pest control. Sure, it would be fun for shooting at silhouettes or for other casual plinking, but the significant cocking effort will, for most shooters, be a deterrent to long shooting sessions.

Its modest weight makes it comfortable for long walks though the squirrel woods or helping out the local farmer with his pigeon problem. Add a sling (you’ll need a barrel clasp for the front sling mount) and you’ll be able to carry it for miles.

What the Gamo Swarm Fusion 10x GEN2 Does Worst

Airguns are often and rightly considered great tools for introducing new and/or young shooters to the shooting sports. The Gamo Swarm Fusion 10X GEN2 is not a beginner’s gun. While not overly heavy, it is sized for adult shooters. The significant cocking effort will also limit its appeal to some shooters.

Does the Gamo Swarm Fusion 10x GEN2 Deliver on Its Mission?

While some airgun enthusiasts get a charge out of shooting high-end, precision guns, many shooters are simply looking for a reliable, powerful, modestly priced gun for small game hunting and pest control. The Gamo Swarm Fusion 10X GEN2 air rifle fits that bill nicely. It’s not overly fancy, but it’s a strong and accurate shooter that won’t break the bank.