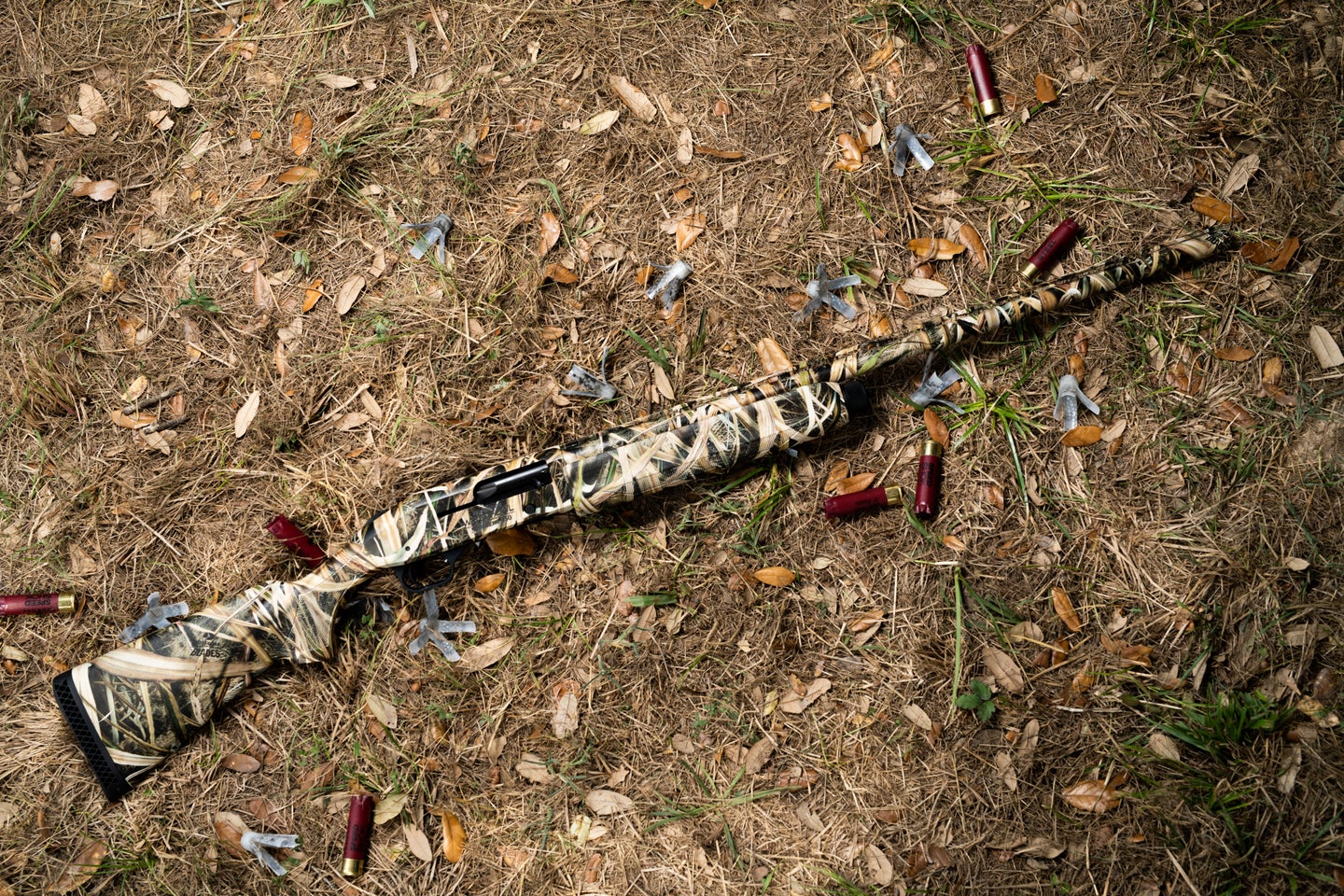 We tested the Stoeger M3000 during a teal hunt in Texas last fall. Stephen Maturen
SHARE

Not everybody wants to spend $2,000 on a duck gun. Waterfowling is hard on guns and gear. Some people like a gun they can abuse without thinking about how much they paid for it. For them, there’s the Stoeger M3000. It’s a straightforward, no-frills inertia gun that sells at a price that won’t make you feel bad about dropping it in the mud.

The 3000’s predecessor, the 2000, was one of the first Turkish-made shotguns to see widespread use in the U.S., starting right around 2001. Turkish guns, like Japanese guns before them, had to overcome a reputation for being cheap and unreliable. The fact is that Turkish guns are inexpensive because labor costs are low in Turkey. It’s also true that Turkey has a long tradition of gunmaking and many, many gun companies. They are learning what the U.S. market expects, and improving the guns all the time.

The Stoeger 3000 is inertia operated, like the Benelli and Franchi guns, all of which are owned by parent company Beretta. Stoeger is positioned among brands as the sort of Chevy to Benelli’s Cadillac. It’s a lunchbucket brand, and there’s nothing wrong with that. The M3000 is a 3-inch 12-gauge gun only. It’s available with 24-, 26- and 28-inch barrels in black, camo, and walnut hunting versions. It’s a gun that can be a dedicated duck gun, a backup/bad-weather gun, or an all-around shotgun for someone who wants to be in the sport without investing a lot in a gun. There’s also a sporting clays model for target shooting, a compact model, and home defense guns. Stoeger also offers a scaled down M3020 in 20 gauge and a a 3 ½-inch 3500 that are very similar to the M3000.

Nuts and Bolts on the Stoeger M3000

Underneath the hood, Benelli and Stoeger semiautos use the same inertia action and work the same way. When the gun is fired, the two-piece “floating” bolt remains in place, with the rotary head locking tighter as the gun moves backward. Inside the bolt, a heavy spring is compressing, and as the gun slows, the spring expands, throwing the bolt backward. The advantage of inertia systems is that they stay cleaner longer and tend to work in conditions that might stop a gas-operated gun.

The design difference between the two actions is that the M3000 has its return spring on the magazine tube; not in the stock as a Benelli does. On the plus side, that means the spring is easy to inspect and clean without the need to take the gun all the way apart. It also requires the Stoeger to have bigger, bulkier forend to contain the spring, so the gun doesn’t have the same sleek lines of a Benelli and it has a much more weight-forward balance. There are other small differences. The Stoeger has a small, round safety that, unlike the Benelli’s, doesn’t easily reverse for left-handed use. The recoil pad is ventilated to add some give, but it’s nothing like the soft pad of Benelli’s ComforTech system.

The Model 3000 was one of the many guns we took to the Pintail Hunting Club last September for three days of teal hunting, pattern testing, and target shooting. We passed guns around during the morning teal hunts. The hunts were exciting, but even taking time out to switch guns and trying to make the hunts last, we couldn’t stretch them to more than about 40 minutes before we limited. So, we made up for it at the clays range, shooting up flats of target loads. We also patterned the guns for point of impact, and with hunting ammunition, using a Modified choke at 35 yards.

The M3000 weighs over 7 ¼ pounds, and much of that weight feels as if it’s concentrated in the front end. That balance, and a bulky forend, gives it a different, less lively feel than other inertia guns. But, the guns that feel awkward in hand sometimes swing just right. Outdoor Life’s Joe Genzel made one of the best shots of the trip, a two-for-one double on crossing teal at the end of the decoys, when he was shooting the M3000. The M3000 lacks the enlarged bolt handle, safety, and release button found on many waterfowl guns. Of those three, the only one I might have a problem with is the small safety which could be harder to find and operate with a numb finger in cold weather.

With its semi-humpback receiver, the Stoeger M3000 has pleasing-enough lines, but there’s no question it’s a lower-priced gun when you look at it closely. There’s nothing exactly you can point to, except that it lacks the attention to detail in its fit and finish that you’ll see in higher-priced brands. This may not bother you in the least, and waterfowling is definitely not a beauty contest, so maybe it shouldn’t matter. More troublesome, though, was the grip cap that fell out of the gun during one hunt. Obviously, the grip cap is not a crucial part, but, only one gun had a piece fall off during the hunt—and that gun was the M3000.

The M3000 seems most suited to the duck blind, but the gun has swivel studs and is drilled and tapped and could readily take on spring turkey duty, too. Also, there is a 24-inch-barrel option, meaning you could use one for turkeys and maybe upland birds if you wanted to choose the shorter barrel length and focus on turkeys and birds with waterfowl on the side. At right around 7 ¼ pounds, it’s not too much to carry in the uplands, either, although there are lighter choices.

Even though Stoeger does make a target model of the gun, the biggest advantage of shooting a semiauto at clays is recoil reduction, and inertia guns don’t reduce recoil anywhere as much as gas guns do. Adding to the M3000’s versatility is that Stoeger offers reasonably priced extra barrels for the gun, so for an extra couple hundred dollars you can get a different barrel length or a fully rifled, cantilever barrel to make it into a deer gun.

What I see with lower-priced guns is that some people love them and some hate them, depending on their individual experience with them. Some work trouble-free forever. Others don’t. Of course you can have problems with any gun at any price point, but it seems that the less you spend, the greater the chance you might get a bad one. To underscore this, our M3000 was the only gun I can recall failing to cycle during a hunt. It happened twice. Now, Stoeger does recommend a 150-round break-in period for the M3000, and it’s entirely possible that by the end of the hunt, our test gun would run perfectly for the next shooter. Or it might not.

One data point that speaks very well for the M3000’s reliability is the fact that 3-gun shooters who might not want to spend up for a Benelli M2 have adopted the M3000. It’s a good recommendation of any gun if target shooters, who run their guns a great deal, approve of a particular model.

All in all, I’d rate the M3000 a good value. Listing below $600, it puts you into an inertia gun for very little money compared to other brands. With the action spring on its magazine tube, it’s an easy gun to maintain. Every part you need to tend to is readily accessible. The drilled, tapped receiver makes it a good fit for someone who wants a duck gun that can become a turkey gun in the spring, and it helps that one of the three choke tubes packaged with the gun is an extended Extra-full turkey tube. Also, the availability of extra barrels for this gun mean you can make it even more versatile without spending a ton of money.

What the Stoeger M3000 Does Best

What the Stoeger M3000 does best is put the advantages of inertia operation in reach of anyone. Inertia guns tend to be less sensitive to harsh conditions. They go a long time without getting dirty, and they are easy to clean when you finally do have to take the gun down and give it some care. With its mag-tube mounted recoil spring, the M3000 is especially simple to care for. With its drilled and tapped receiver adding versatility, the M3000 makes a sound choice for someone who doesn’t want to spend a lot on a shotgun they can use for more than one type of hunting.

Inertia guns with so-so recoil pads kick, so the M3000 has a bit of a recoil problem. But, there are aftermarket, pre-fit pads for the M3000 though, which will help mitigate recoil somewhat if you want to spend $40 or so for better pad. Even so, it’s not a gun I would choose for a lot of shooting at clay targets when there plenty of gas guns that work better. And while the gun is not overweight, there are trimmer, lighter choices in semiautos for upland hunting. It does have a horrible, heavy, 8-plus-pound trigger pull, which matters to some, and to others (like me) hardly at all, until we’re talking about aiming a turkey gun, when it does.

Finally, the two failures to cycle (even pre-break-in failures) and the falling grip cap make me think that if I could, I would step up in price. Also, as a left-handed shooter, I won’t buy guns that don’t have easily reversible safeties, and this one doesn’t.

Final Thoughts on the Stoeger M3000

The Model 3000, like many less expensive guns, has its fans and its detractors. I think their attitudes are largely based on what type of experience they have had with their own guns, which seems to vary more with shotguns the less you spend. That said, lot of people shoot M3000s and swear by them.

It is hard to beat the M3000 for the money. You get a proven inertia action that should keep shooting in bad conditions, and it comes in a package that you won’t mind taking out into those same bad conditions. You get a gun that can be inexpensively accessorized with extra barrels. If you don’t want to use it as your primary gun, it would make a good backup, if you believe, as I do, that the best field repair kit is an extra gun.