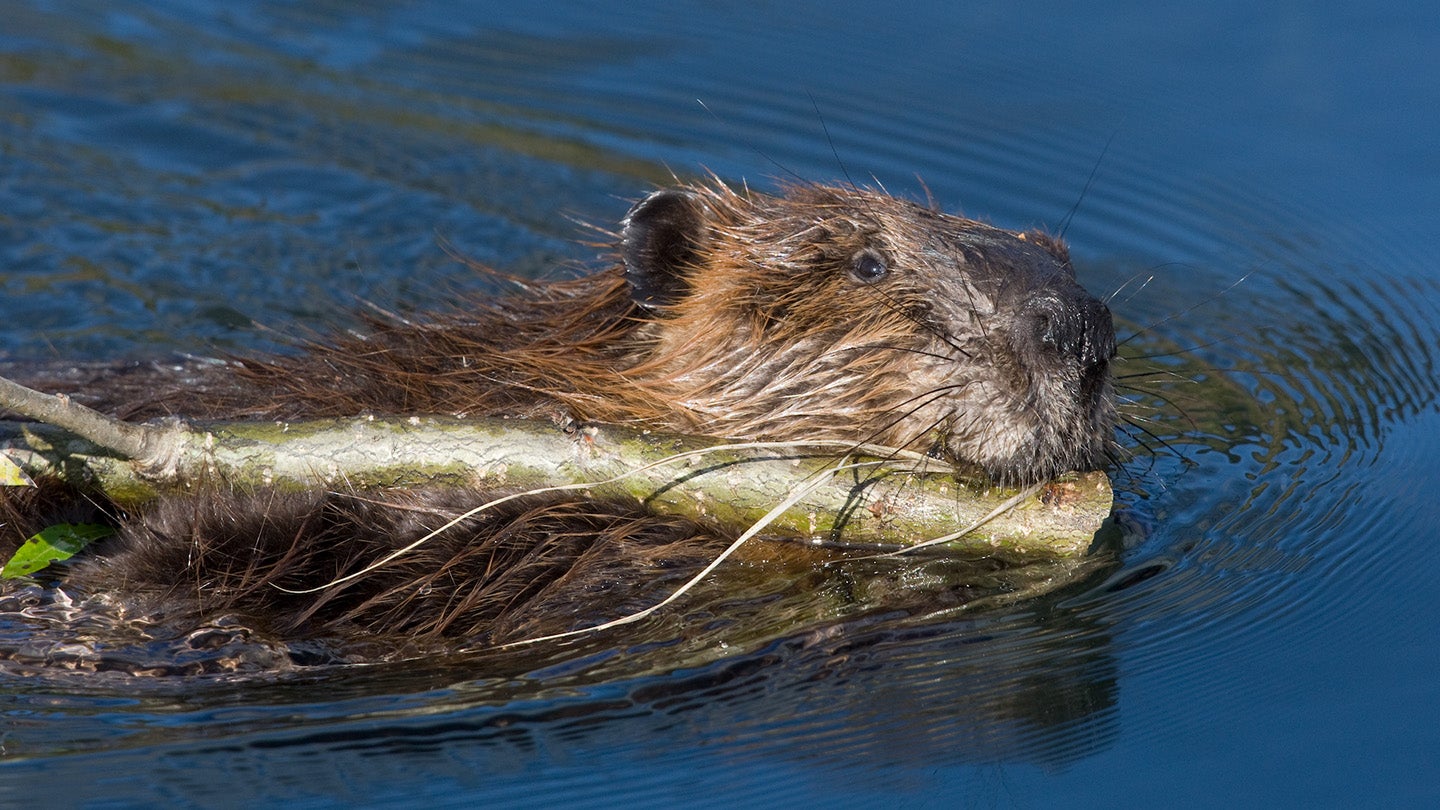 A beaver drags a freshly gnawed limb toward its lodge. Donald M. Jones

Learning to trap has transformed the author’s “off”-season, not to mention his family’s eating habits

ANSE AND I SMELL like Hell Fire predator lure, and Michelle won’t let us into the cabin until we leave our coats and coveralls on the porch. Anse, 7, worms out of his Carhartts and giggles “Hell Fire” over and over again until Michelle gets after him for his cussing.

“It doesn’t count, Mama, because that’s the name of the lure!” he says, and then he looks at me for support.

Hell Fire is a gelled predator attractant that smells pungently of skunk and is sold in a tiny glass bottle. In trapper’s lingo, the smell is “loud.” I won’t touch the jar without rubber gloves, and I only apply the lure to the grass near a finished set with a stick. Anse got hold of one of those sticks, swung it around like a sword, and ended up with a good smear of Hell Fire across the chest of his coveralls. You could smell him from 30 yards.

I used to dread the off-season between the end of deer season and the beginning of spring turkey. But then Anse and I got into trapping. Now we spend that time making land sets for coyotes, raccoons, foxes, and bobcats and water sets for beaver, otters, muskrats, and minks. We’ve had better turkey hatches on our place every year since we started predator trapping, and that was the primary goal. But we’ve also come to love the season and the process itself. I skin and sell the raw furs and give Anse the few dollars we make for his piggy bank. We spend far more than that sending the prettier stuff off to be tanned and returned, to keep for ourselves or give away as gifts to friends. Michelle says she’d like to learn to flesh and soft-tan our furs herself, but for now, that’s just an aspiration.

Trapping teaches you a lot about using scents. Everything about the process has a distinct smell. Inside the cabin is a better odor, one of slow-cooking meat that’s not unlike that of a beef roast. I lift the Crock-Pot lid and seine away some of the fat that’s been rendered from the quarters bubbling in a stock of Coors Light, beef broth, onions, and seasonings. I pull at the meat—rich and greasy—and discard the bones.

“The porch smells like a skunk, and the cabin smells like a damn beaver,” Michelle says. Anse has stripped down to his white cotton long johns, the kind old men wear, and turned on Wild Kratts.

“Look here, buddy,” I say, holding up a bag of King’s Hawaiian sweet rolls in one hand and a brand-new bottle of Sweet Baby Ray’s barbecue sauce in the other. “How about some beavercue sliders and Tater Tots for lunch?”

Anse swoons dramatically and says, “Beavercuuue,” drawing out the word as if eating the sandwiches will relieve him of some great burden he’s been carrying for days.

I know hunters who are uncomfortable with trapping because they don’t like the idea of killing an animal without eating it. Generally, I’m of that mindset too. But there are limits. I’ve seen the virtue-signaling videos of people cooking and eating coyotes, for example, and carrying on as if they’ve done something really noble. But every winter I watch turkey vultures ignore skinned coyotes. Personally, I can avoid eating anything a buzzard won’t touch and still sleep OK.

We use the predators for their furs only. But show me a nice beaver killed clean by a 330 Conibear and held overnight in ice water, and I’ll show you the beginning of a good feed—plus a nice fur to boot. Beavers are obese vegetarians (an oxymoron, like jumbo shrimp) and the world’s second-biggest rodent species. The biggest is the capybara, a South American critter that also lives in the water and is equally delicious. I killed one once in Argentina with a Benelli shotgun and a makeshift load of buckshot made from steel ball bearings.

Insulating fat and a clean diet give beavers a flavor that’s often compared to that of beef. Bullfrogs and squirrels are said to taste like chicken but don’t at all. But a slow-cooked beaver really does taste like roast beef. Anse likes his best soaked in barbecue sauce and served on a sweet roll.

Beavercue sliders are not Michelle’s favorite food. Anse, with sauce already staining his long johns, knows this, and will not miss a chance to do some virtue signaling of his own. “Mama, you need to get a plate and eat some of this damn beaver,” he says. Then he looks at me. “It’s not a cuss word, right, because of beaver dams? And Mama said it earlier too.”

Michelle puts a tiny scoop of beavercue on a single Hawaiian roll and sits down next to Anse. I’ve watched her handle a snake—despite being terrified of it—purely to teach Anse that irrational fear is silly. “The damn beavers do build beaver dams,” she says to him. “But I’m still going to whip your ass if you keep up that cussing.”

I used to hate these short, cold days of late winter. But now, with the trapping and the beavercue and the cussing, it’s become one of my favorite times of the year.