Spring fishing gets all the hype, but if you’re after deserted streams and fat trout, don’t retire your rod once... 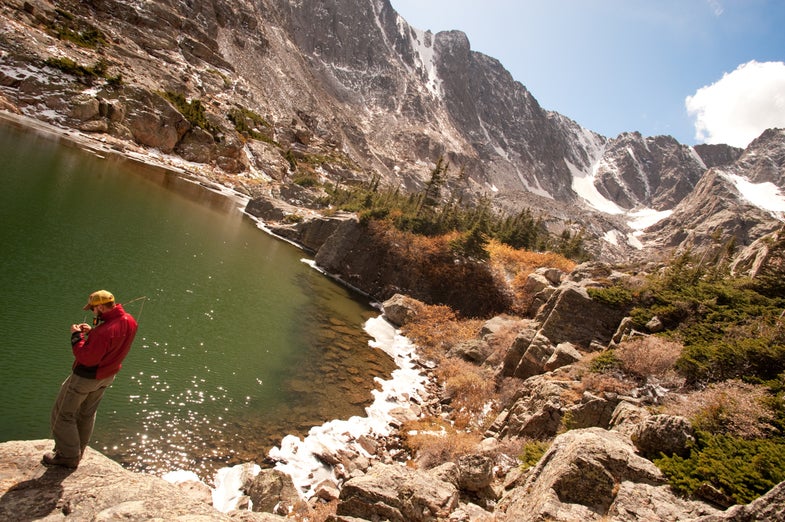 Spring fishing gets all the hype, but if you’re after deserted streams and fat trout, don’t retire your rod once the leaves begin to fall. Contributing photographer and FlyTalk blogger Tim Romano weighs in on his favorite autumn flyfishing haunts—and the tactics you’ll need to land some serious fish.

The Green River in Utah

The A, B, and C sections of the Green River below the dam in Dutch Jon, Utah, are each among my favorite fall fishing spots. In autumn, the crowds begin to thin and the beauty of the river is unparalleled. The fishing ain’t half bad, either, of course. Concentrate your wade fishing on the A Section, and float fish in the B and C sections. If you’re after especially big fish and don’t mind throwing streamers, focus your efforts on the C Section, but be sure to use sink-tip line. Small terrestrials, Blue Winged Olives, midges, scuds, and emergers all work well in the fall on the Green. Additional resource: Trout Creek Flies.

Though the Rocky Mountain National Park is not a river, like every other entry in this list, it does offer some of the West’s most serene high-alpine lakes, loaded with wild cutthroat trout. The weather can be tricky in the fall, but should you hit it right, you’ll have a lake all to yourself—with hungry, cruising cutthroats looking to eat whatever slips into the water. Bring small ants, beetles, stimulators, and a pile of small streamers to make your day a good one. Additional resource: Kirk’s Fly Shop.

The Lower Deschutes River in central Oregon is one of the Northwest’s premier rivers for feisty rainbow trout and for its summer run of steelhead. Few other rivers in the U.S. boast both species in such quantity and quality, and you can find prime water for each between Trout Creek and the town of Maupin. The stretch is also one of the finer three-day scenic floats available anywhere. Come fall, caddis flies, large and small, are the name of the game, especially in October. For steelhead, 6-, 7-, and 8-weight fly rods with floating heads work well, and swinging flies and nymphing should each prove effective. Additional resource: Deschutes Angler.

From just west of Kremmling, Colo., all the way down to the tiny hamlet of Dotsero, the Upper Colorado offers about 65 miles of the best float and wade fishing in the state. Multiple put-ins and walk-and-wade access points allow for a multitude of ways to target trout. Come early fall, the brown trout key in on streamers, and the rainbows like to sip Blue Winged Olives, small caddis, and a variety of other mayfly and midge patterns. Concentrate your fishing from the Pumphouse put-in down to the Catamount campsite area. Additional resource: Colorado Angler.

The North Platte in Wyoming

The North Platte River flows out of Colorado through the Northgate Canyon and takes an easterly turn toward Casper, Wyo. There is an abundance of wade and float options in the area, and though the fishing action can wane in fall around the Miracle Mile, the Gray Reef Reservoir and spots near Casper are typically productive throughout the season. For dry flies, try the usual suspects—caddis, tricos, PMDs, and the occasional small hopper. If you’re into nyphing, leeches, scuds, worms, and pheasant tails should all work well. Of course, don’t overlook throwing streamers or busting out spinning gear for the big browns for which the river is known. Additional resource: Crazy Rainbow Fly Fishing.

From below the Yellowtail Dam, in Fort Smith, Mont., down to the town of Hardin, the Bighorn River is responsible for some of the most glutinous trout fishing in the West. With thousands and thousands of fish per mile, covering a lot of water is key. I recommend taking a 15 to 20-mile float trip, beginning near the dam and headed east. In the fall, fly choices should consist of tiny dries, like CDC cripples, spinner patterns, tricos, and the occasional small terrestrial, as well as nymphs, like San Juan worms, sowbugs, and orange scuds. Additional Resource: Bighorn Angler.

One of the West’s true treasures, the Colorado River from below Glen Canyon Dam all the way to Lees Ferry, at the top of the Grand Canyon, is visually spectacular and an amazing trout fishery. The stretch of river boasts thousands of trout per mile and gin-clear water nearly year round. That said, it’s a technical fishery and one that’s a bit tough to access on foot, so I suggest hiring a guide, at least for a day, to jet boat you upriver. Midges, scuds, and streamers work well in the fall. Additional resource: Lees Ferry.

The Best Fishing Towns in America