How SideScan Sonar Helped Me Catch a Weakfish On My Birthday

If you haven't transitioned to 3D scanning technology yet, this will help convince you 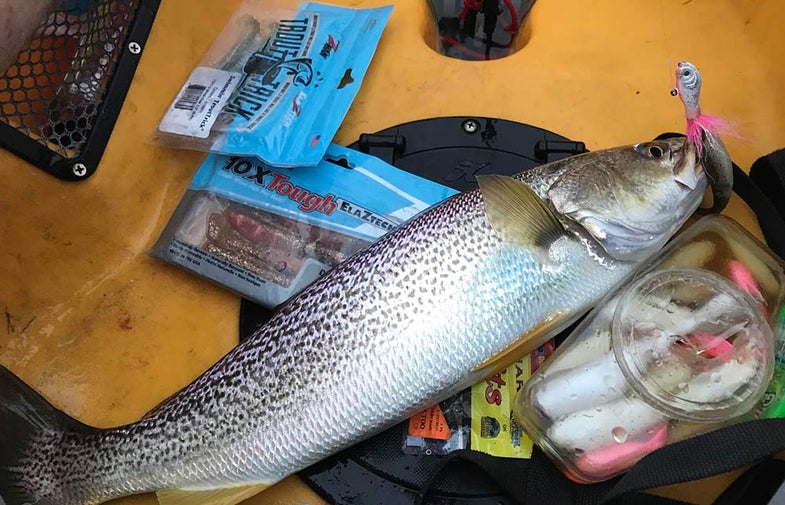 Early fall is a great time to target weakfish along the northeast and mid-Atlantic coasts. I caught this one on my birthday last week and side-scan sonar helped me do it. Nate Matthews
SHARE

Earlier this summer a bunch of other outdoor writers and I got a professional lesson on how to find fish using side-scan sonar. We were down in Florida, just ahead of the ICAST show, on a two-day Johnson Outdoors/Academy Sports junket out of Jensen Beach. We fished out of small boats rigged with Humminbird side-scan sonar units and bow-mounted electric trolling motors, running in and out of St. Lucie Inlet for snook, tarpon, and cobia.

Side-scan sonar uses high-frequency radio waves to paint a picture of the bottom out to either side of your boat. I’d seen some jaw-dropping sceenshots from these units in magazines and on websites, so last year I installed an entry-level side-scan system onto the kayak I fish from at home. But I never really took to the technology. I found it hard to read, and ended up using 2D almost exclusively.

This trip changed my mind. Here’s what I learned, and how it helped me up my game at home.

The biggest thing I hadn’t understood about side-scan was that you need to move at a constant speed and direction. Slowing down, speeding up, or turning your boat warps the picture your unit is drawing off the bottom.

On higher-end sonar units, these shadows are sharp enough to draw a clear outline of the fish on screen. Tarpon look like tarpon. Jacks like jacks. Snook are (fairly) clearly snook.

“I normally use my side-scan for tarpon fishing but it can be applied for any type of fishing,” Britton told me.

He likes using it at night or in dirty water in particular. Times when he can’t spot fish with his eyes. I asked Britton if he could think of a situation in which side-scan was NOT useful, and the only thing he could think of was if the water was shallow—2 feet or less.

Connecting the Dots With Waypoints

Another thing I learned was that side-scan lets you take your GPS system to a whole new level. I had not realized how GPS waypoints worked with side-scan units. Every time I’d dropped a waypoint before was in 2D sonar, meaning the waypoint got placed directly under my kayak. If I wanted to mark the edges of structure, I had to guess where I thought those edges were, pedal over, and drop a mark wherever I found a dropoff.

But side-scan sonar can drop waypoints out to either side of your boat. It removes the guessing game entirely. Once you scan a piece of structure you can use your arrow keys to move your cursor overtop of each corner, every feature, and mark the whole thing in a way that defines its shape on your chart.

At one spot, where we were fishing for goliath grouper, Britton showed me how he had marked all four corners of the wreck we were holding over. The wreck showed up as a rectangle on his GPS screen. Because he could see the shape of the wreck, he could easily tell how it lay in relation to the wind and current, which let him position his drifts with terrific precision. This part blew my mind a little and I resolved to start using side-scan more often in my own fishing on the Northeast coast.

Gold For My Birthday

I used this technique just the other day to catch my first weakfish of the season. I like targeting them in the early fall, when they school up near structure to feed on all the juvenile fish flocking out of our inlets. I was fishing an artificial reef inside Long Island’s Great South Bay, where a buddy of mine had found some fish earlier in the week. I’d fished there before, but not often, and never using a side-scan system. My plan was to use what I’d learned in Florida to scout it out.

The first thing I did was apply a little discipline. Instead of stopping to fish the first decent structure I found, I kept the pedals moving and used my side-scan unit to chart and mark the length of the reef. This reef was long and skinny: a half-mile-long, 100-yard-wide line of scattered government junk. Moving west to east I had the end of the incoming tide with me, so I stopped only when I wanted to define the corners of the juiciest structures.

The tide slacked out just after I reached the reef’s eastern end. I stopped there to fish, switching to a chartplotter/2D sonar view on my display unit, then drifted back west with the tide as it started flowing back out the inlet, working all the spots I’d charted on my way up the reef. One of them was a large pile of what looked like old concrete parking barricades. The pile was about 20 feet wide, shaped like a rectangle, very distinct on the side-scan, so I’d placed a waypoint on each corner.

My weakfish technique is pretty simple. I usually set up downtide of the structure I’m fishing and cast out a lightweight bucktail jig, 1/2 to 1 ounce, depending on the speed of the current and whether I’ve got it tipped with a bulky or a low profile trailer. Once the jig hits the water I count seconds until it touches down. Then I slowly retrieve back to the boat, pausing every so often to stay in contact with the bottom.

Weakfish fight like bluefish and have mouths like crappies, so you have to fish them on a light drag. A good percentage of hits happen early in the cast, as the jig is still falling through the water column. The bite is subtle because weakfish often hit moving up; I’ll set the hook at just a touch of slack, or when my jig fails to hit the bottom when it’s supposed to.

My first casts were to the northwest corner of the concrete pile. I worked my way clockwise around the shape of the rectangle, finally connecting with a nice weakfish on the southwestern downtide edge. I picked up three more there before the first power boats showed up and scared off the bite.

Without knowing the full shape of the concrete pile I would probably have missed these fish. None of them were huge, the largest maybe 24 inches, but they were the first weakfish of my season, a good sign for October and a great way to celebrate my birthday.

For guides fishing home water, the use case changes for side-scan tech. They don’t need it to find the best spots to fish anymore; they already know where those spots are. Instead, they use the tech to scan their favorite spots for fish. This was how our guides targeted snook on this trip. They’d bomb on outboard power from one spot to the next, then slowly cruise the structure while watching their side-scan screens. If they found a good school they would position the boat upcurrent and off to the side of where those fish were holding, using electric trolling motors connected to their GPS units to hover in the ripping current.