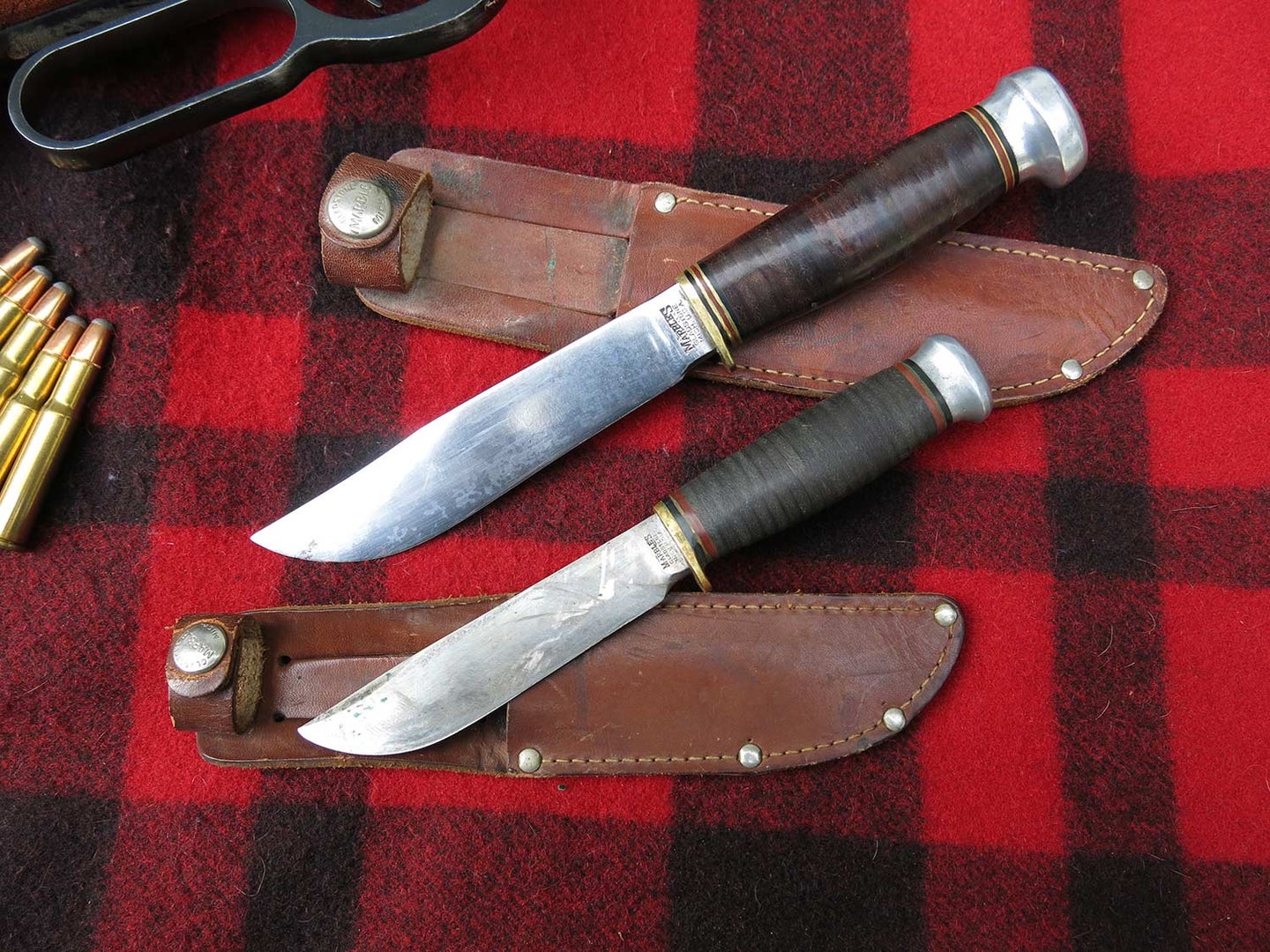 The Marble’s Expert (top) and its little brother, the Sports Knife (bottom). The Expert is a great all-around outdoor knife, but the handle on the Sports Knife is just too short. Steven Dick
SHARE

In the years after the Civil War, “hunting” knives tended to follow one of three patterns—heavy-duty folders, traditional Bowie knives, and small utilitarian butchering type blades. Outdoor writers of the period all ridiculed the Bowies as being strictly, “Billy the Kid, dime-novel fantasies.” As for the butcher knives and the folders, they got the job done, but they didn’t have much flash. Then came Webster Marble.

Marble almost singlehandedly turned the hunting knife into a must-have piece of outdoor gear for the well-turned-out sportsman. This started in 1899 with the Ideal model, which was available in a variety of blade lengths from 4 to 8 inches. While stag slabs were available at extra cost, most were handled in a feature pioneered by Marble—stacked leather washers. All had clip-point blades and a deeply-fullered edge grind (not a blood groove). Originally, the deep fuller was intended to allow the blade to be laid flat on a hone and sharpened something like a straight razor. Of course, the safety razor was soon to make the old cut-throats obsolete, and the Marble’s fuller became more of a trademark than a design feature. Early Ideals all came with a small, practical single handguard on the edge side of the blade, but for some reason, a less useful double guard replaced this in a few years. Marble tended to know his customers well, and if he thought a double guard would sell better than a single, then that was the way it was going to be.

Read Next: Best 25 Knives Ever Made

Marble’s next gift to the sporting cutlery world was the Expert sheath knife (5- and 6-inch blade lengths), introduced in 1906. This was a straight-backed, sheath knife with a slight clip-on, flat ground blade that swept to the point at the very end. While this may sound fairly conventional, no one else was making a similar hunting knife at the time. Marble first marketed this model as not being up to the same kind of hard use his Ideal was. Instead, it was supposed to be reserved for professional hunters, trappers, and guides with the experience to use a light, sharp blade in the field. That must not have been a very good marketing strategy as the cautions against hard use were soon dropped from their advertising. The Expert pattern is just a strong as any other knife in its general weight class when used for reasonable field tasks.

In 1929, Marble’s added a 4-inch-blade version of the Expert to its line called the “Sports Knife.” The Girl Scouts of America adopted it as their official sheath knife in 1930, and the Boy Scouts made it an alternative to the more expensive Woodcraft. A 4-inch blade would seem to be a very practical length for hunters, but the 3-¼-inch leather-washer handle made it a little difficult to grip for many field tasks. In any case, the knife continued in the line until 1960 when the handle was lengthened, and the model renamed the “Campcraft.”

Around 1915, Marble made what some consider his greatest contribution to outdoor cutlery, the Woodcraft sheath knife. While Marble never gave him credit, a hunting writer named George W. Brooks claimed to have designed the first Woodcraft in 1914. The wide, upswept, 4-½-inch, flat-ground blade was his version of the perfect big game and trapping knife. Modern hunters will automatically question the length of the 3-¾-inch handle, but this was intentional on the part of Brooks. He felt the proper grip when field dressing was to choke up on the handle with the base of the blade between your fingers. In any case, buyers must have questioned the length of the handle too, as, over the years, Marbles steadily increased its length. One strange side note to its history is that it was once the official sheath knife of the American Boy Scouts, from 1933 to 1940. I’m not sure who made that decision as it seems like the Expert or even the Ideal would have been better for camping chores. Maybe it was the Woodcraft name that sold them.

As popular as the Marble’s line was with outdoorsmen, it was their impact on the rest of the cutlery industry that really made a lasting impression. Starting in 1918, the English cutlery company, Wade and Butcher, began offering pretty much exact copies of Marble’s Ideal pattern. In short order, virtually every major cutlery company in the U.S., England, Germany, and Sweden began offering their own versions of Marble’s most popular knives.

Before WWII, the Woodcraft saw the most attention from competitors. But that changed at the start of the war with the adoption of the legendary USMC Fighting/Utility—a knife that was basically a militarized version of a Marble’s Ideal. Most period cutlery companies also produced close copies of the Ideal for use as survival knives in the various branches of the armed forces. Marble’s actually made very few knives during the war as they were given contracts for other needed equipment.

Read Next: Five Best Hunting Knives Ever Made

Some say it was the millions of knives produced by other companies for the war effort that doomed Marble’s in the long run. During the 1950s, there were huge numbers of sheath knives available for next-to-nothing in every military surplus store. Germany, as well as several other European countries, also flooded the country with massive quantities of low-priced sheath knives (most of them based on the old Marble’s patterns).

The company got a short reprieve in 1957 when its survival knife design was selected for use by all Air Force and Navy pilots. Basically, this was the Ideal with a 6-inch sawback blade, fully sharpened false edge, steel crossguard, and a heavy steel nut as a pommel. The sheath also offered a stone pouch and extra holes for tying it down to a flight uniform. Unfortunately for Marble’s, they were quickly underbid by Camillus Cutlery on future purchases. In 1962, the design was shortened to 5-inches to make it easier to carry inside aircraft cockpits. When Vietnam heated up, the Camillus Pilot Survival Knife became a standard-issue item for a wide range of units, including Ranger Companies. While none are stamped “Marbles,” the knife remains in wide use even today.

There has always been a certain amount of fad over function involved in the way outdoorsmen select their cutlery. Marble’s pattern sheath knives ruled the market for decades, but the introduction of the Buck 110 lockback design in 1965 was a turning point. Slowly at first, but with increasing momentum, the folding hunter once again became the favorite field knife of most hunters, and the Marble’s patterns were considered “old fashioned.” By 1992, Buck had produced 11,000,000 Model 110s and was adding more at the rate of 400,000 a year. Marble’s halted most knife production in 1976, and the trademark was later sold to a company overseas.

Read Next: The Total Outdoorsman’s Guide to Knives

It’s now rare to find a Marble’s pattern hunter in any of the major cutlery lines. This is a pity, as the Woodcraft still remains one of the best big game processing knives ever designed. The Expert would also seem to be perfect for the needs of modern bushcrafters. In any case, Marble’s Woodcraft and Ideals are still easy to find on eBay. While they may not be sparkly new, they still have a lot of hunting seasons still left in them.