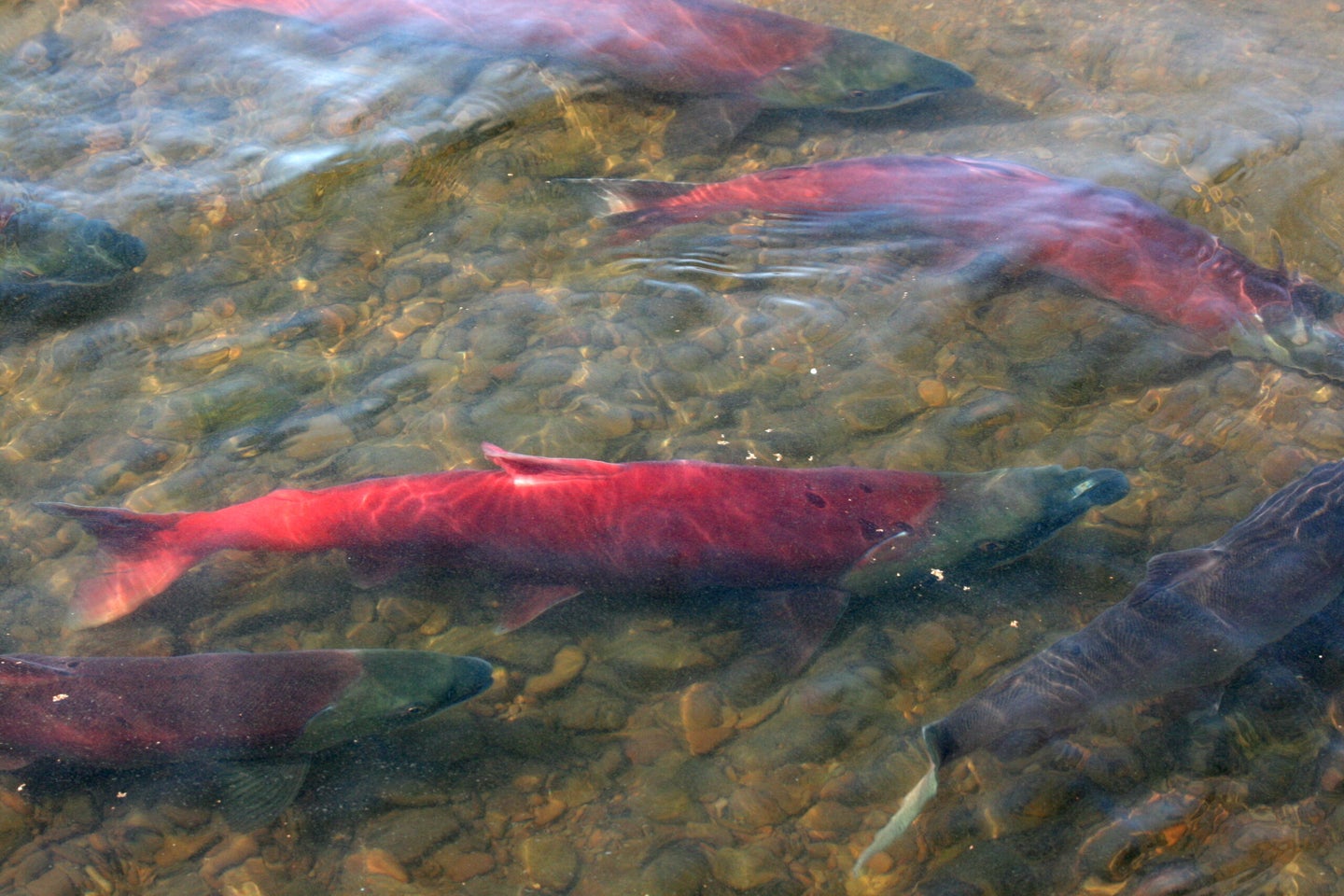 The Pebble Mine project could destroy the Bristol Bay ecosystem forever. VasikO via depositphotos.com
SHARE

Pebble Mine executives have finally admitted the obvious: that once they start digging their copper-and-gold mine, set in the headwaters of Alaska’s famed Bristol Bay, home to the world’s largest red salmon run, they have no intention to stop—at least not anytime soon.

The proposed Pebble project, a mammoth fishery-destroying open-pit mine, sits atop the world’s largest-known copper-and-gold deposit, worth some $40 billion over the next 20 years and some $300 billion in total. This week the nonprofit Environmental Investigation Agency (EIA) released a dozen videos, recorded surreptitiously over the past two months, that are as illuminating as they are troubling. In the recordings, two mining executives, Ronald Thiessen and Tom Collier, confess that, should the Army Corps of Engineers permit the fishery-ruining mine to move ahead, their companies plan to expand the project well beyond its stated 20-year duration—confirming a suspicion long-held by outdoorsmen, environmentalists, and Alaska locals.

The EIA tapes are the latest entry in the long, twisted Pebble Mine saga, which began more than a decade and a half ago, and mark a significant turning point in the debate. In a little over 24 hours since the recordings’ release, Tom Collier—the bombastic CEO of the mining company Pebble Limited Partnership, who stood to pocket a $12.4 million bonus if he could successfully drag the project through permitting—has resigned.

Once Digging Begins It Won’t Stop

EIA recorded Collier and Thiessen, the president and CEO of Northern Dynasty Minerals, which controls the Pebble Limited Partnership, under false pretenses, posing as interested investors. In the tapes, Thiessen estimates that the Pebble project could operate for 180 years. “Once you have something like this in production,” he says, “why would you want to stop?” In a separate conversation, Collier puts the project length at 200-plus years, and assures the undercover EIA investigator that the project’s scope will surely grow once digging begins.

The executives’ admissions, though significant in candor, come as no great shock. Since the Pebble Mine was first proposed, much of the debate has centered on the project’s duration. That’s because twenty years of digging would leave a whopping 90 percent of the Pebble deposit’s $300 billion total worth of minerals in the ground—major incentive for the Pebble Partnership to keep the project going. But mine critics maintain, for good reason, that the longer the project drags on, the more irreparable harm it will cause the Bristol Bay fishery. Before Tom Collier resigned this week, he repeatedly tried to quash such concerns. “Pebble has no current plans, in this application or in any other way, for expansion,” he told the House Subcommittee on Water Resources and the Environment in October 2019.

The EIA tapes reveal the opposite, and suggest that the Pebble Partnership and Northern Dynasty have downplayed the mine’s scope, and thus its environmental effects. “They’ve lied to Alaska, they’ve lied to us in Bristol Bay, and they’ve lied to America,” said Robin Samuelsen, a commercial fisherman and activist, in a conference call Wednesday.

Oregon Congressman Peter DeFazio chairs the House committee before which Collier appeared in 2019. “The [EIA recordings], if verified, are extremely disturbing,” DeFazio told Field & Stream this week. “Not only do they suggest the company is misleading the public about the size and scope of this destructive open-pit mine, but also that Mr. Collier misled Congress in order to get what he wanted, which is an extremely serious matter. I’ve directed my investigative staff to closely examine these newly-revealed recordings, and I will proceed accordingly based on what we find out.”

What Else The EIA Tapes Reveal

The EIA tapes, beyond disclosing the project’s true intended duration, reveal the Pebble Partnership’s close relationship with the Army Corps of Engineers, the agency which will ultimately decide the mine’s fate. At one point, Collier says that he recently called the Corps’ head of permitting after the mine hit a roadblock. “What the hell is going on?” he asked. In Collier’s telling, the Corps official laughed and assured him that the project would move forward.

On a press call Wednesday, Alannah Hurley, executive director for the United Tribes of Bristol Bay, said that the recordings prove that the Corps and mining companies are colluding to ram the project through permitting. Moreover, Collier’s comments lend further credence to the notion that, in evaluating Pebble Mine’s potential environmental effects, the Corps has been less than scrupulous and too easily swayed by industry interests. “It’s time to end the charade and make decisions based on sound science,” added Norm Van Vactor, CEO of the Bristol Bay Economic Development Corporation. “We’ve known for years what [mining executives] have been telling potential investors.” (In response to the videos, the Corps stated that it had “identified inaccuracies and falsehoods” in the executives’ statements over its permitting process and its staff’s relationship with the Pebble Partnership.)

In addition to Collier’s comments about the Corps, the executive claims in the EIA tapes to have close ties with Alaska Governor Mike Dunleavy, saying he held the largest private fundraiser for the governor when he was running for office. “It’s not unusual for the governor to call me,” Collier adds. In a separate conversation, Thiessen alleges that Dunleavy had contacted the White House chief of staff, Mark Meadows, on behalf of the Pebble Partnership to help move the project ahead. (Dunleavy denies this; in the Washington Post, Collier criticized EIA for its “questionable ethics” in misrepresenting the purpose of the video calls.)

Despite Setbacks Mine Executives Are Optimistic

The Pebble project has grown increasingly politicized the longer it has played out, as further evidenced by the EIA tapes. In 2014, the Obama administration halted the project altogether, only to have the Trump administration reverse the decision. Then, in July, the Corps released the final Environmental Impact Statement for the project—one of the last hurdles that stood in its way. But the Corps seemingly reversed course a month later, after Donald Trump, Jr., tweeted criticism of Pebble Mine. The Corps subsequently stated that the project couldn’t be permitted as proposed—leading some outlets to report, mistakenly, that the Pebble Mine debate was at last put to bed.

In the EIA tapes, Thiessen reveals that the project is still “in pretty good shape” and betrays no doubt that the mine will move ahead. According to the New York Times, the Corps will likely make its final decision on Pebble’s permit within weeks—after which the Pebble project can seek state permits and begin construction. As significant as Collier’s resignation and the EIA tapes are, it’s doubtful that they’ll derail the Pebble project this far along in the process. After all, as Thiessen assures a caller, “[the Trump EPA] has indicated its clear intent not to veto this process,” adding, “So we’re in.”