Just because nobody knows about them, doesn’t mean they don’t deserve a place in your gun safe 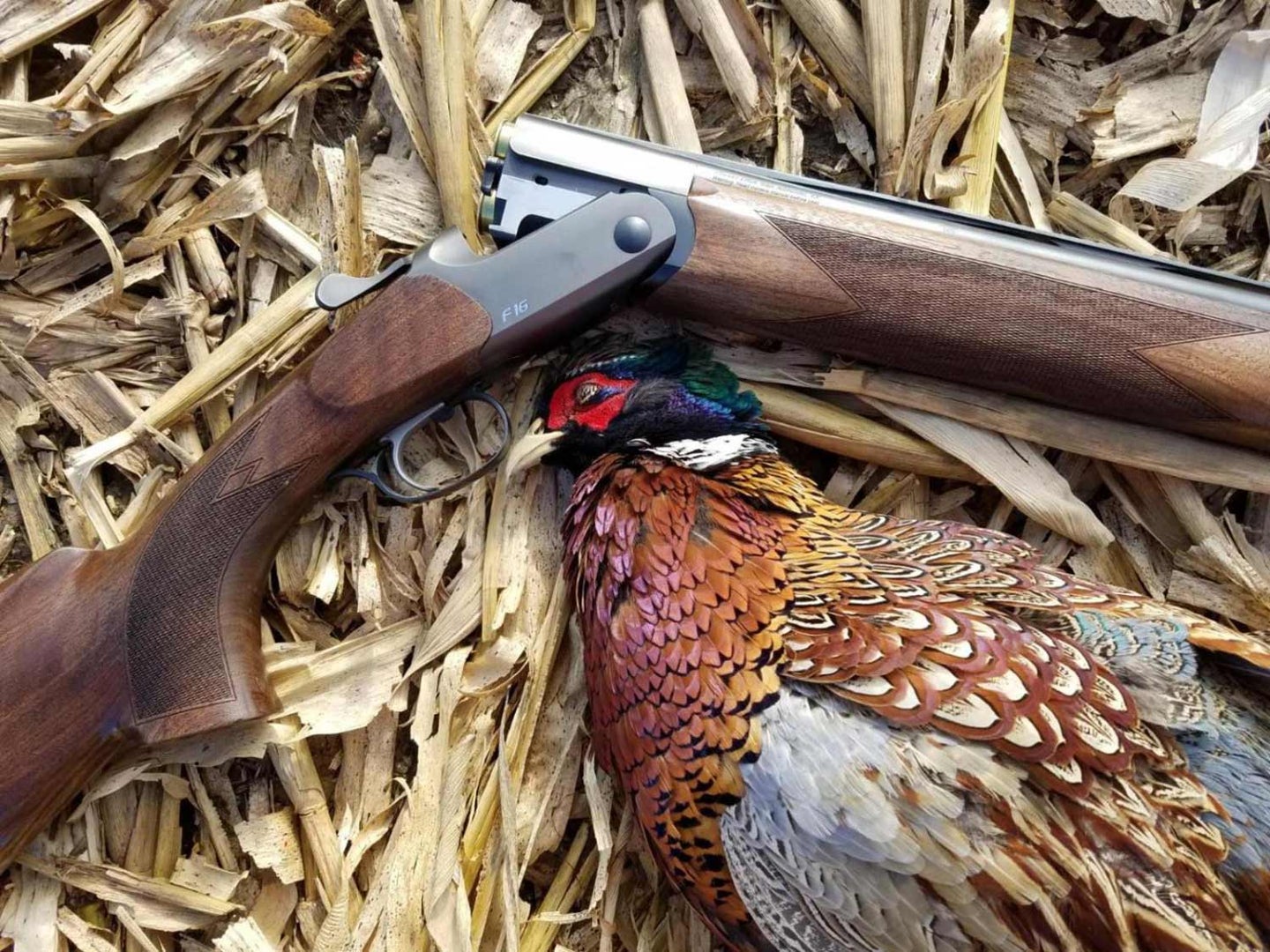 Some great shotguns escape mass notice. Maybe they’re ahead of their time, or they’re not heavily marketed, or maybe they were overshadowed by other models. Whatever the case, some really good guns remain under the radar forever. I’ve been thinking about that this fall, as my companion in the field has been a Blaser F16, a terrific field O/U that hasn’t made much of a dent in the U.S. market yet. That seems to be its fate, and the fate of several other excellent guns past and present, all of which (well, maybe with the exception of number 3) are well worth ferreting out and adding to your collection. Here are eight overlooked shotguns: three currently in production and five no longer being made.

The F16 is essentially a less-expensive (about half price) F3 without a few of its features. But at $4,289, and without a lot of name recognition, it’s not making a big splash in the U.S., which is a shame.

With a very low-profile receiver and terrific balance, the F16 is a delight to carry and shoot. My test gun has 30-inch barrels and weighs a little over seven pounds, yet it feels lighter to carry and has just the right amount of weight up front to make it point and swing surely. It’s a lively gun. I remember a line by author Steve Grooms to the effect that his old SKB O/U “did as good a job of executing his intentions when a pheasant was airborne as any gun could.” That’s not an exact quote, but that’s exactly how I’ve come to feel about the F16.

People more sensitive to triggers than I will notice right away that the pulls of the mechanical trigger are excellent. And, because it’s German, the F16 has unique, over-engineered ejectors that are never cocked until the gun fires, saving stress on the springs. I get lots of guns to test, and usually it’s no problem to part with them when the time comes to send them back. This one, though, I’ll be sorry to box up. Sometime later this year, you’ll be able to buy a 20-gauge version—albeit on a 12-gauge receiver—or have 20-gauge barrels fitted to your 12. Blaserusa.com

Because Benelli has become so popular for making the same gun. Breda has been in business since 1922 and is best-known for making machine guns for the Italian military. However, Breda employed engineer Bruno Civolani, who developed the inertia system made famous by Benelli semiauto shotguns. At the time, Breda owned half of Benelli, but they subsequently sold out to Beretta, which remains Benelli’s parent company. Breda is still allowed to make inertia guns (and they do), and they are imported to this country by Breda USA.

If you miss the original Super Black Eagle, look no further than the B3.5SM (formerly known as the Grizzly). It’s the spitting image of the old SBE. Breda advertises it as “handmade by Italian craftsmen,” which I would take with a grain—or a whole shaker—of salt, but there’s no question it’s a well-made, well-finished gun and not a cheap imitation. It features a rubber comb insert to reduce recoil, and can be ordered in barrel lengths from 18½ to 30 inches. They start at around $1,399. Bredausa.com

Invented in 1925 by Rodolfo Cosmi, the Cosmi semiauto is a break-action, recoil-operated semiauto that holds up to seven rounds in a tubular magazine in the stock. It’s a handmade gun, with over 100 carefully fitted internal parts. Think of the Cosmi as the Swiss watch of semiauto shotguns. Rodolfo Cosmi put the magazine in the buttstock in order to keep the gun trim and well-balanced because his goal was to make a semiauto that handled as well, and was made as well, as a fine O/U. Current and former Cosmi owners include crowned heads of Europe, Leonid Brezhnev, and Benito Mussolini. Cosmis come in 12, 16, 20, 28, and .410, all on scaled frames. If you absolutely have to have a Cosmi, Pacific Sporting Arms acts as their U.S. importer. Pacificsportingarms.com

Because everyone knows Marlin only makes lever guns.

The Marlin Model 90 was inexpensive, simple, and very durable. It handled well, too. In short, it was everything you’d want in a working man’s O/U. Sears Roebuck originally contracted Marlin to make them an O/U, and they obliged with the Model 90, producing it from 1937 to 1958. It was made under the Ranger brand before WWII and the J.C. Higgins brand afterward. At various times, it was offered with one or two triggers, and some had ribs between the barrels while others did not. Model 90s had soft iron frames, giving the receivers something of a purple hue as they aged.

It was a budget gun, selling for $30 when it was first introduced, although there were some higher-grade Model 90s made, including a Skeet King version and some finely engraved custom models, like the one presented to Marlin spokesman/cowboy star Tom Mix. A very few were made as combination guns, in .410 with .218 Bee, .22 Hornet, or .22 LR rifle barrels, as well as a 20 gauge/.30-30 model. Those guns are rare and will cost you if you find one.

You’ve heard of Canadian Club, and Canadian bacon, but Canadian high-grade shotguns? It doesn’t help that only 18,000 Tobins were made from 1905 to 1921.

Sidelock actions, in which the lockwork of the gun is fitted to a removable sideplate, are considered the pinnacle of fine double-gun design. Primarily a hallmark of the finest bespoke British guns, sidelocks were made in North America only by L.C. Smith in Connecticut, and Tobin, first in Connecticut, then in Ontario. L.C. Smith is a well-known name among double-gun fanciers. Tobin, although of excellent quality, is not.

Tobin Arms was founded by Frank Major Tobin of Nova Scotia. Tobin had moved around the U.S. working for gun makers and dealers before decided to go into business for himself. He bought the rights to a sidelock action that he named the Simplex, and then he formed Tobin Arms in Norwich, Connecticut, in 1905. He produced several grades of his gun, ranging in price from $30 to $200—roughly the equivalent of $800 to $5,000 today. The high-grade guns had some beautiful engraving, gold-plated internal parts, and Krupp or Belgian fluid steel barrels.

In 1909 Tobin moved his factory to Woodstock, Ontario, where the guns were made until the business went under in 1921—although some guns were assembled from parts for several years afterward. The highest grade Tobins will bring between $1400 and $2900 in the used market, but the lower grades can sometimes go for as little as $400.

To be fair, you might have heard of the Model 31, but you also may not have. The Winchester Model 12 sucks up 95 percent of the oxygen in the room when talk turns to classic pump guns. The Ithaca Model 37 gets the other 5 percent, and the 31 is often left out of the conversation and gasping for air.

Remington made the Model 31 from 1931 to 1949. Like pumps and semiautos of its era, it was made of machined parts and required plenty of skilled hand-fitting. The Model 31 was an extremely well-made gun, with an action so slick it was billed as the “ball bearing repeater.” It was also made in a lightweight version with an alloy receiver, making it one of the first, if not the first, alloy-frame pump I’m aware of, and a great gun to carry in the uplands. It also served in large part as the inspiration for the Mossberg Model 500, which is a much more cheaply made, stamped and pressed-part pump, but one that features a very smooth pump stroke, just like the Model 31. Model 31s are out there, and they’re cheap. You can pick up a field grade 31 for $400 and have one of the best pumps ever made.

Because they were only made for a couple of years, and because it’s impossible to get your mind around the idea of high-end, custom Mossbergs.

In the early 70s, Mossberg was diversifying into all kinds of sporting goods—sailboats, travel trailers, and golf clubs, among others. Mossberg had purchased Pedersen Golf Corporation in 1971 and, given the brand’s strong identity as a maker of high-end, custom golf clubs, kept the name, using it both for the golf club business and for their short-lived custom gun division.

The highest grades of Pedersen guns were Beretta O/Us shipped in the white (unblued) to Mossberg, where customers could order custom engraving, wood, and their own stock dimensions. The metal finish was done at the Mossberg plant, while the wood finish and engraving was outsourced to top American specialists. The Grade I Model 1000, the top of the line, featured gold inlaid engraving, premium walnut, a rosewood grip cap, and custom measurements, all for $970. That would be about $5,600 today, and a fraction of the cost of most custom shotguns.

Because you don’t hang around gun clubs talking to the old guys enough. Outside of trapshooters, no one else has any use for a single-shot, gas-operated pump shotgun, but that’s exactly what the 870 Competition is. Also, they were only made for a short time in the early 1980s, when about 5,000-5,500 were produced.

Why It Was Great

The 870 Competition was great because it worked exactly the way it was supposed to. Trapshooters like the soft recoil of gas semiautos, but they also like the reliability and empty hull control afforded by pump guns. The 870 Competition gave them both. Remington designed a gas system for the gun that bled gasses from the barrel just like any gas semiauto, but instead of cycling the action, it used them to push against a buffer weight inside the magazine tube. The weight moved back when the gun was fired, then the magazine spring pushed it forward. The effect was an increase in the duration of the recoil pulse, turning it from a punch to a shove. Having shot an 870 Competition once, I can tell you it was a very soft-shooting gun. And it was an odd experience to shoot a pump gun and feel almost nothing when I set it off. If you’re a trapshooter who appreciates old-school shotguns, used examples in excellent condition typically run between $500 and $600. Add one to your collection, and you’ll likely be the only person at your club with an 870 Competition.