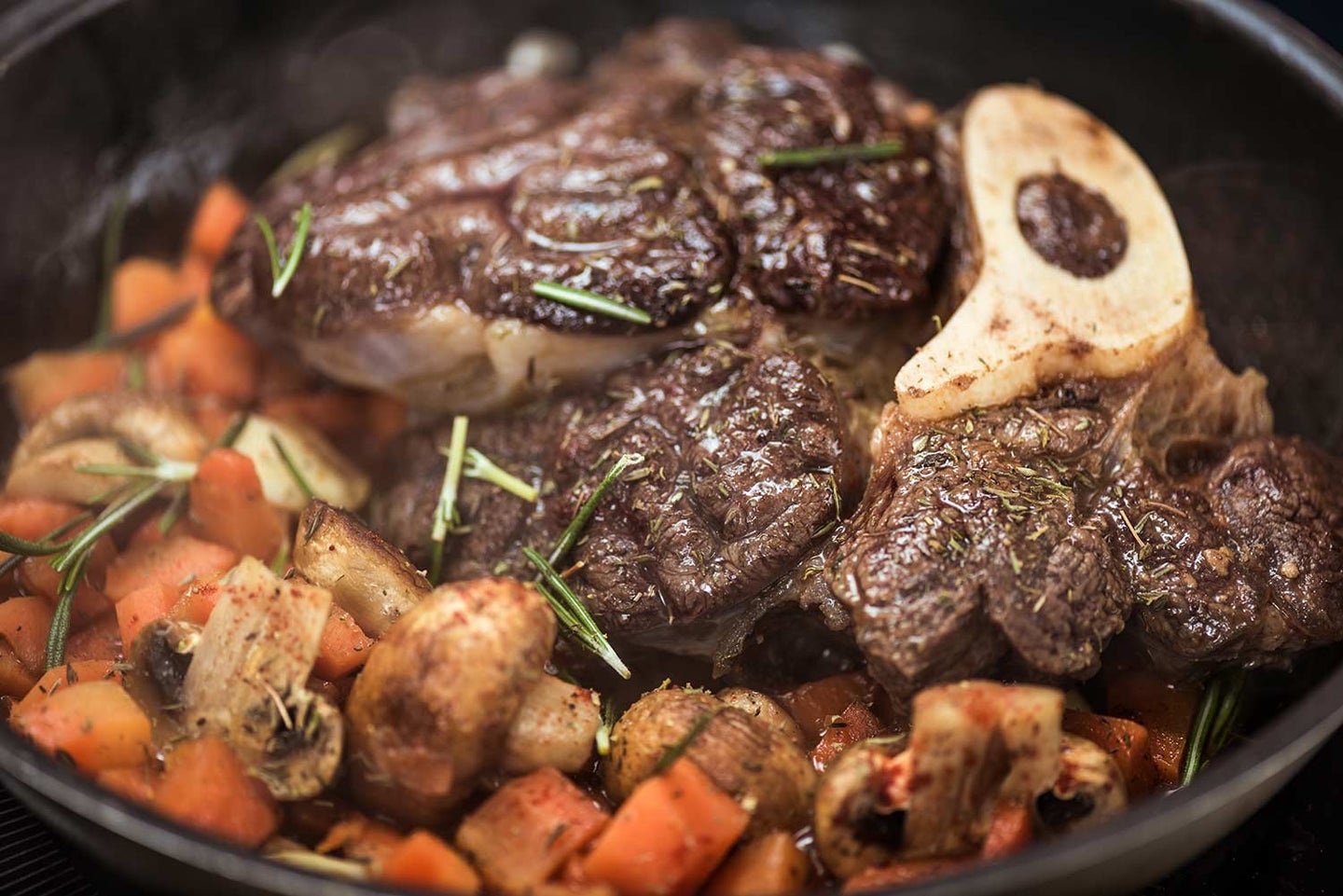 Go low and slow for tough cuts of meat. DmitryPoch via depositphotos.com
SHARE

Sometimes, when I mention the word “braising,” people look at me all quizzically—like I’m talking about some fancy, froeign cooking technique. Nothing could be further from the truth. Braising is the very simple act of cooking something—generally meat—at a low temperature under moist heat for a long period of time.

Sounds a lot like cooking in a Crock-Pot, doesn’t it?

In fact, anytime you’re using a slow-cooker, whether making a pot roast, stew, cacciatore, or any number of other low-and-slow recipes, you’re braising. You can also braise in a heavy-duty pot on the stovetop or in the oven. In fact, I do all my braises in my Dutch oven this way. The low temperatures, moist heat, and long cooking times break down collagens in the meat and can make the toughest of cuts fork-tender. To me, it’s the most essential cooking technique for wild-game cooks. Braising is perfect any time of year, but it’s particularly enjoyable in winter, when the long braise can fill the house with tantalizing and unctuous odors of hearty meat.

There are few basics to braising: Keep temperatures low, 250 degrees or below; always keep the lid tightly closed; don’t use too much liquid–just enough to come about a quarter or halfway up the side of the meat. Beyond that, here are five tips to know that can make a good braise even better.

Before braising, every side of the meat should be seared in a little bit of oil over high heat, but browning aromatic vegetables, such as onions and celery, also develops another deep layer of flavor. If you’re using a Crock-Pot or other slow-cooker, brown meat and vegetables in a heavy-skillet, then add them to the pot.

After the browning step, add a pinch or two of brown sugar or a bit of molasses or honey to the remaining oil and let it caramelize to create a surprisingly rich, but not sweet, taste.

After the sugar step, splash a little liquid—wine, stock, water—and as it simmers, scrape up what is known as the “fond,” the browned bits on the bottom of the pan. These are like tiny flavor grenades.

Read Next: Braised Squirrel With Bacon, Mushrooms, and Pinot Noir

Because cooking times are so long, braises are no place to be delicate. Instead of water, use a darker stock or stout wines. A few bay leaves are essential. Rosemary, fennel, star anise, and even an anchovy or two will raise your braising game.

Almost without exception, braised meats taste better the next day. Something about letting them rest allows all those layers of flavor to come together.