No fish stands for American values like the adaptable, enthusiastic, and democratic panfish 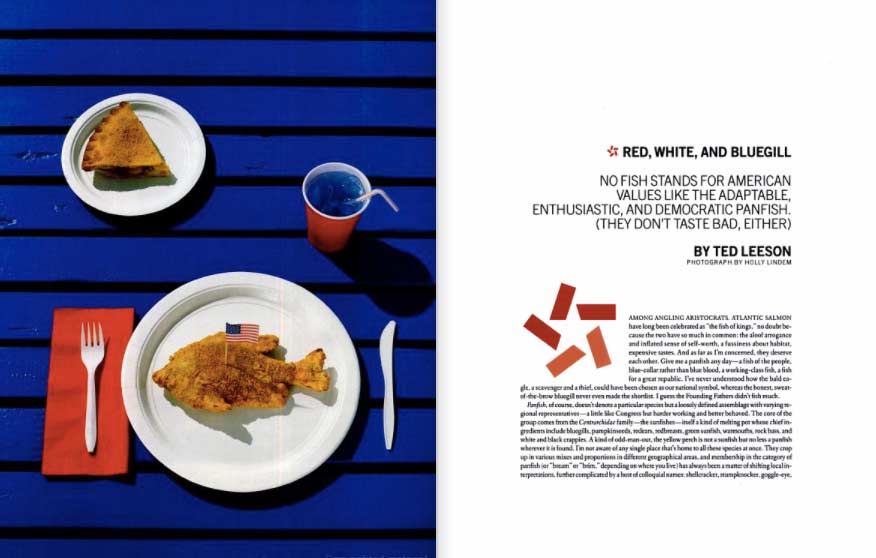 The bluebill is as American as apple pie. Field & Stream
SHARE

This story was published in July 2004. You can find the complete collection of F&S Classics series here.

Among angling aristocrats, Atlantic salmon have long been celebrated as “the fish of kings,” no doubt because the two have so much in common: the aloof arrogance and inflated sense of self-worth, a fussiness about habitat, expensive tastes. And as far as I’m concerned, they deserve each other. Give me a panfish any day-a fish of the people, blue-collar rather than blue blood, a working-class fish, a fish for a great republic. I’ve never understood how the bald eagle, a scavenger and a thief, could have been chosen as our national symbol, whereas the honest, sweat-of-the-brow bluegill never even made the shortlist. I guess the Founding Fathers didn’t fish much.

Panfish, of course, doesn’t denote a particular species but a loosely defined assemblage with varying regional representatives-a little like Congress but harder working and better behaved. The core of the group comes from the Centrarchidae family-the sunfishes-itself a kind of melting pot whose chief ingredients include bluegills, pumpkinseeds, redears, redbreasts, green sunfish, warmouths, rock bass, and white and black crappies. A kind of odd-man-out, the yellow perch is not a sunfish but no less a panfish wherever it is found. I’m not aware of any single place that’s home to all these species at once. They crop up in various mixes and proportions in different geographical areas, and membership in the category of panfish (or “bream” or “brim,” depending on where you live) has always been a matter of shifting local interpretations, further complicated by a host of colloquial names: shellcracker, stumpknocker, goggle-eye, sun perch, longear, speckled perch, white bass, and so on. In practice, the term ultimately falls into that set of expressions, like “I’ll do it in a minute” or “I have strong feelings for you,” that are universally understood but not necessarily taken to mean exactly the same thing by everyone.

Fishermen don’t trouble themselves much about such discrepancies, instead focusing on the collective virtues of the fish. And foremost among their merits is a relentless availability. Like the other indispensables of American life-duct tape, canned chili, and WD-40-panfish can be obtained virtually everywhere. I’ve taken them in creeks and rivers, brackish water and fresh, 10,000-acre lakes and quarter-acre stock tanks, old quarry pits, prairie potholes, golf-course water hazards, abandoned strip mines, backyard ponds, irrigation ditches, and once, the ornamental fountain pool behind a fancy hotel. As a group, they are America’s most widespread and abundant gamefish. And they are nothing if not game. I’ve caught them by accident and on purpose, on handlines, trotlines, poles cut from tree limbs, garage-sale spincast outfits, fly tackle that cost slightly less than my car, and every kind of gear in between. I’ve grabbled a few by hand and (in a mercifully brief period of angling dementia) jigged them up through 2 feet of ice. Equally ready for a few casual casts after work or the formalities of an organized expedition, panfish are a fish-of-all-trades, up for anything, anytime. They are a welcome counterweight to the forces of high-tech angling and a persistent reminder that fishing is finally about fish, not equipment.

Accommodating and enthusiastic, genial and cooperative, panfish are custom-cut for the neophyte. In the angling universe of my youth, they were the force of gravity that held everything together. The ones I could catch whetted my skills and honed my instincts. Those that proved better at being fish than I did at being a fisherman gave me a continuing sense of purpose. Without panfish, I might well have sunk into juvenile delinquency, or golf. The pinnacle of every summer was the day my father, a man who did not readily leave the house, squeezed our whole family into a station wagon and endured the eight-hour drive to a lake in northern Wisconsin. He herded us directly from the car into a rowboatt where, except for a few moments stolen to dig more worms, we spent a week or two yarding in unimaginable numbers of perch and rock bass and bluegills. The little ones bit readily. And the bigger ones proved just discriminating enough to teach you something but still catchable enough that you could learn the lesson. At a time of life as yet uncorrupted by a lust for magazine-cover specimens, panfish fulfilled the greatest promise in all of angling-pure action.

We ate them too, by the stringerful, with butter and lemon and onions, fried, baked, broiled, and grilled, and best of all, without guilt. Even today, in a time when quality angling for high-profile species increasingly hinges on catch-and-release, you can still sit down to a plate of bluegills or crappies without the slightest twinge of conscience or the fear of a second-rate meal. They come by their name honestly, for a pan is the highest destiny of these sweet-eating fishes. Bony? Sure, a little. And a steamed crab is mostly shell. Who’s that going to stop?

Once you’ve got panfish in your soul, they never really leave. Not many seasons ago, a friend and I extorted an invitation to a pay-to-play trophy trout lake in the high desert of eastern Washington. The morning’s fishing, though not fast, produced some remarkable trout, among the biggest of my life. Noon found us prospecting the lower end of the lake. Approaching deeper water near an earthen dam, we suddenly doubled up-smaller fish, it was clear, but dogged and determined fighters. To our utter disbelief, they turned out to be a pair of identical yellow perch a full pound apiece, with deep blue-green backs and lemon-lime flanks that shaded into fat, cantaloupe bellies. With no real idea how they got there, but a pretty good one about how to get them out, we burned up half a box of trout flies and a whole afternoon happily catching perch in a $200-a-day lake where a 5-pound rainbow scarcely elicits a yawn. That evening when our host, proud of his fishery and eager for a report, asked how we’d done, we just told him, “Couldn’t have been better.”

And we meant it. In this age of scientific fisheries control, of measurements and projections that produce finely calibrated angling regulations, panfish may well be the last unmanaged gamefish in America, left to themselves, on their own as they’ve always been and doing just fine, thank you. It’s ironic that a whole sector of the fishing industry now thrives on whisking anglers off for remote and pristine destinations to experience sport of unspoiled abundance, fishing “the way it used to be.” Any 8-year-old kid with a cane pole, a bike, and panfish in his heart can lead you to just such a place.

And maybe that’s what I like best about them: Panfish are the most democratic of gamefish. They do not care who fishes them and bite equally for everyone. They’re unimpressed by the cost of your tackle, indifferent to the methods you use, unconcerned about the bait you favor, and sometimes, whether there’s any bait at all. Panfish are angling’s version of the single-shot .22-sturdy and dependable, workmanlike and unpretentious. If panfish formed a baseball team, they’d be the Cubs; if you could play them on a jukebox, they’d be Hank Williams tunes; if panfish were a beer, they’d be whatever’s on sale.

Oh, and there’s one last thing. Except for the more cosmopolitan perch, panfish are pure homegrown. Though, like much in American life, they’ve been exported around the world, panfish are indigenous only to North America, native to no other part of the globe. So picture this for a moment-a red-and-white bobber twitching above the slab of a sunset-colored bluegill. Now there’s something worth printing on the back of a dollar bill.