The 10 Best Summer Bass Lures—Picked by the Pros 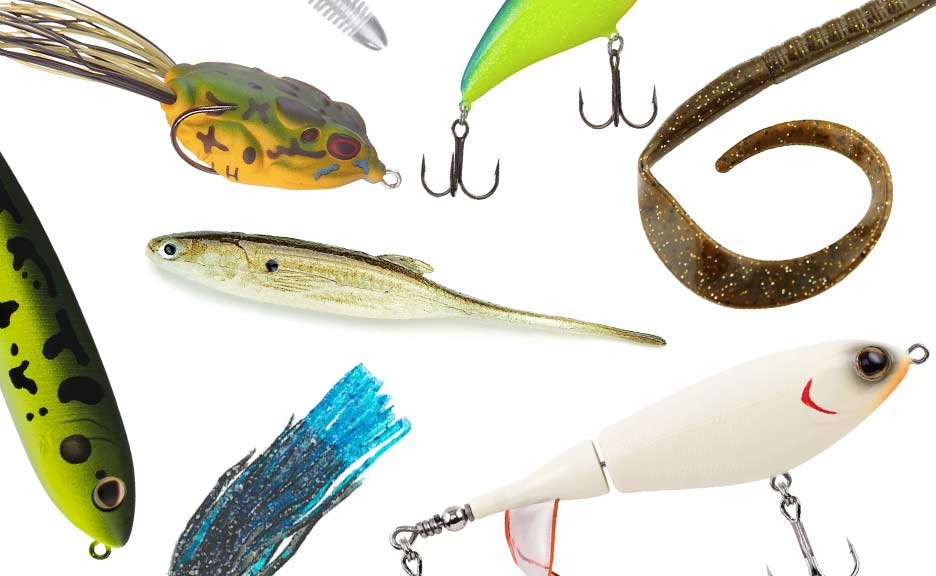 A handful of favorite summer bass baits from the pros we interviewed. Collage by Dave Hurteau
SHARE

When it comes to summer bass fishing, you’ve got options. Maybe too many. You can fish shallow or deep, because when temperatures rise after the spawn, some bass escape the heat by moving to the shade of nearshore cover while others retreat to deeper offshore haunts. You can fish fast, with a topwater plug or crankbait, to cover water and find active bass. Or you can fish slow, with a worm or a drop-shot bait, teasing takes from more lethargic fish.

So, how do you know which are best summer bass baits to tie on at any given moment? Well, you ask. Which is what we did. We put the question to 10 top B.A.S.S., FLW, and Major League Fishing pros. Here are their favorite hot-weather bass baits (in no particular order). Plus, how to fish them.

Why it’s his favorite: “I love this bait’s versatility. There’s always some type of topwater bite going on during the summer, and you can fish the Sexy Dawg in shallow water around laydowns and docks or out in open water.”

How he fishes it: “I look for shallow fish relating to some type of wood cover, suspended off of the bottom, and I’ll walk this bait right over their heads. I also use it as search bait in open water, as well as around schooling fish. Either way, I’ll mix up the speed of my retrieve to see what makes the fish react.”

Why it’s his favorite: “Given how many lakes across the country have shad, this shad-style swimbait is effective almost anywhere. I pair it with a Kitana Hooks Stagger Scrounger Jighead.”

How he fishes it: “In summer, I find ffshore fish with electronics, and then I put this swimbait-and-jig combo in front of them. My exact presentation is dependent on current or wind, as well as a few other factors, but generally it’s a slow, steady retrieve that maintains contact with the bottom.”

Why it’s his favorite: “Although the bite can be a slow at times with the Compact Frog, it will catch some of the biggest fish in the lake through the summer months.”

How he fishes it: “I target heavily shaded shallows where bream like to congregate, including docks and overhanging trees and bushes. I usually cast a little past my target and use a walk-the-dog retrieve, pausing the lure over the highest-percentage areas. I use a Lew’s 7’4” Heavy Custom Pro rod with a Lew’s Hypermag 8:1 reel and 50-pound Pline TCB braid.”

Why it’s his favorite: “Offshore fishing is a must in summer, and you can fish fast or slow. Either way will catch fish, but the latter is more consistent, and the Mag FattyZ is perfect for slow-fishing pressured bass. The buoyancy of the ElaZtech material adds action that brings that worm to life, even while dead-sticking.”

How he fishes it: “I Texas-rig a Mag FattyZ with 5/0 Hayabusa WRM957 hook, a ¼- to ½-ounce tungsten worm weight, and a Fitzgerald Flipping Bead between the hook and weight for added sound. Most of the time, I’ll just slowly drag it along, maintaining constant bottom contact. But depending on how the fish are reacting, I may dead-stick it or use a hopping motion.”

Why it’s his favorite: “The J Walker is a great topwater bait that allows me to cover a lot of water now. The best part about it is that I can use it anywhere on the lake, along the shoreline or offshore.”

How he fishes it: “I use it to catch late spawners in the backs of creeks. I use it on the main lake to target bass that are in full summer stage. And I’ll cast it to schooling fish at dawn or dusk. I just walk the dog with it at a steady pace. Sometimes I’ll speed it up or completely stop it, but most of the time it’s just a steady retrieve. I honestly think this is the most consistent way to catch fish during the midsummer months anywhere in the country.”

Why it’s his favorite: “A tube is my favorite because it is so versatile. I vary the color based on conditions, but I’ll generally go with Watermelon, Green Pumpkin, or Black/Blue.”

How he fishes it: “A tube mimics so many forage species, from bluegills and perch to crawfish and shad. When I’m fishing rocky cover, I like to insert a jighead inside the tube. For grass or wood cover, I’ll use an Eagle Claw Trokar TK-190 Tournament Tube Hook with a ¼-ounce tungsten weight. You can flip it, drag it, swim it, or even twitch it on the top. Mix it up until you start catching fish.”

Why it’s his favorite: “This is a great summer crankbait that gets down to the 16- to 17-foot range. A lot of folks don’t know about it yet—which means a lot of bass haven’t seen it. My favorite color is Chartreuse/Blue.”

How he fishes it: “I target fish on deep structure now, like points and old roadbeds, as well as schools of fish that I find with electronics. I just cast the bait out and crank it deep, ticking it off the rocks and structure.”

Why it’s his favorite: “Neutral bouancy gives the Bomb Shot better action than other drop-shot baits I’ve tried. For colors, I like MM3 and Fisholicious.”

How he fishes it: “During the summer, I’ll find main-lake fish with electronics and lower this drop-shot bait to them vertically, right under the boat—video-game fishing. I’ll also cast it out onto points and drag it back. Or I’ll throw it in holes in the grass and just twitch the bait, trying not to move the weight.”

Why it’s his favorite: “I like this bait because as you move further into the summer, bass become lethargic and a large, slow-moving meal is most appealing to them.”

How he fishes it: “I typically Texas-rig the B2 with a 3/8- or ½-ounce tungsten weight and a 5/0 Owner Wide Gap worm hook. I target offshore structure and deep grass, and I keep my color simple, using Green Pumpkin and Tilapia Magic in clear water, and Plum, Junebug, or Black and Blue if the water is stained. I cast the worm out, let it drop to the bottom, and slowly drag or hop it back in. If the bite gets tougher, I may switch to an 8- or 6-inch finesse worm on a shaky head.”

Why it’s his favorite: “The rear prop gives the Choppo a great action, and I can cover a lot of water with it to find the most active fish. The 105 size in Bone is my top choice.”

How he fishes it: “I love throwing a Choppo first thing in the morning and the last hour or two of the day during the summer. I’ll bomb it out and let the rings settle before I start bringing it back. I’ll usually start with a steady retrieve and then stop and start it until the fish tell me what they want.”