The Best Guns for First-Time Buyers

Whether you’re looking for a big game rifle or a self-defense handgun, we’ve got you covered 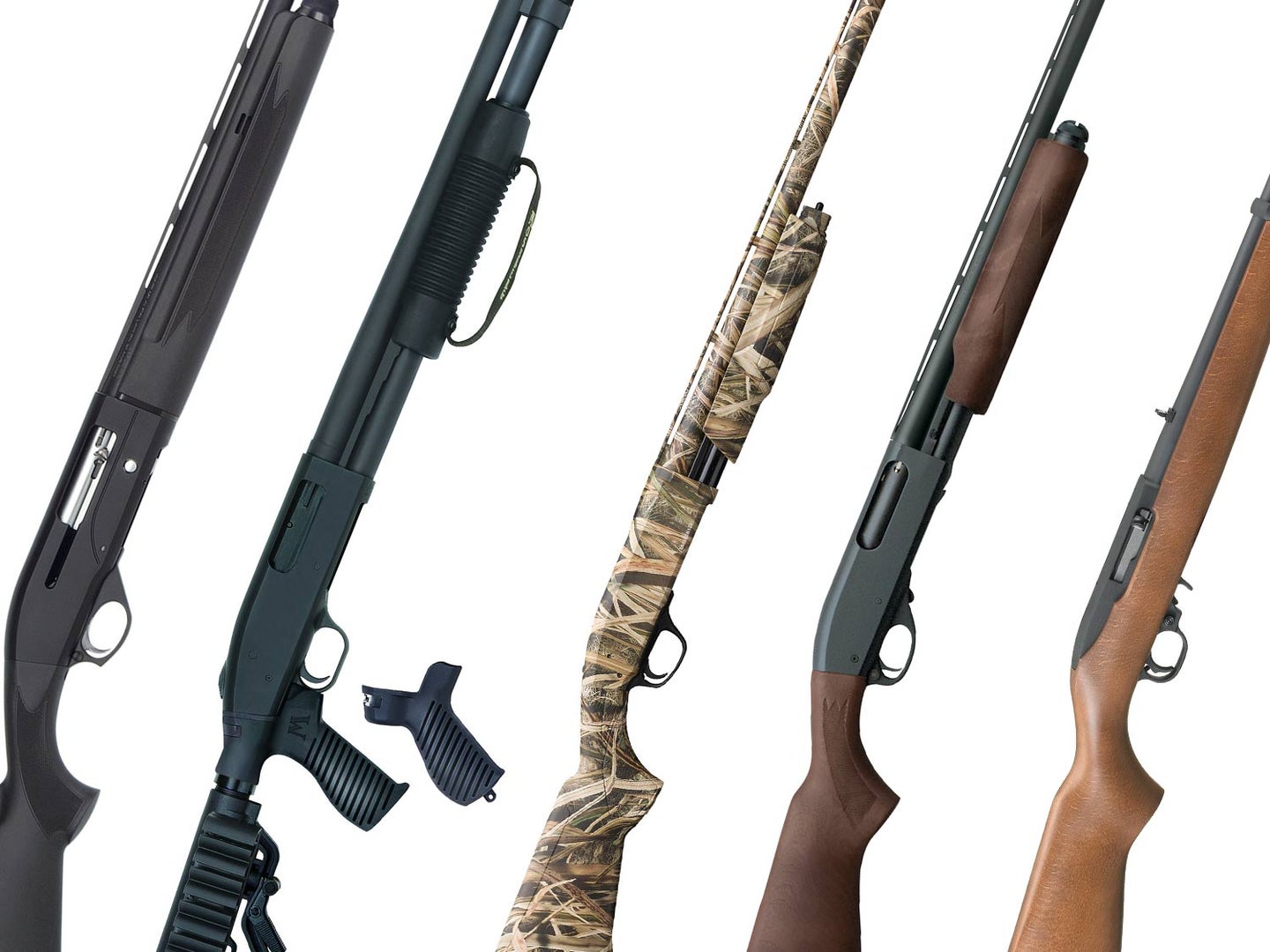 Whether you’re looking for a big game rifle or a self-defense handgun, we’ve got you covered. Field & Stream
SHARE

Gun sales have soared to record levels this year, driven by the COVID-19 pandemic and widespread civil unrest. Many first-time purchasers, bewildered by their first trip to a gun store, are unfamiliar with federal and state legalities or have limited firearms knowledge, and some retail store clerks may provide less-than-reliable information.

Our best advice is to do your homework. Talk to knowledgeable shooters. Read up on types of guns you’re interested in, and remember that choosing a gun is only part of the process. You’ll need to choose ammunition carefully. The same goes for sights and optics. Consider how you’re going to safely store a firearm. Educate yourself before you set foot in a gun store and, most importantly, take a gun safety or hunter safety training class, and then pursue more advanced training. In the shooting sports, there’s always something new to learn, no matter how knowledgeable someone may be.

Here are our recommendations for some of the best guns for first-time buyers in specific categories. Calling any firearm the “best” at anything is a sure way to start an argument, but we all have to start somewhere, so we’re recommending guns that offer a balance of affordability, reliability, durability, and ease-of-use. Most of our selections are economically priced, but we’ve included a few options for those who wish to step up in quality or prefer a different type of action.

Produced continuously for more than 50 years, the Ruger 10/22 is one of the most successful .22 rimfire rifles ever designed. It spawned an entire industry for aftermarket parts and accessories, giving owners endless options for customization. The basic design, however, has changed little from the original, which used a then-unique 10-round rotary magazine to feed a reliable blowback semi-auto action.

Lightweight and compact, the 10/22 is just plain fun to shoot, and it serves the small-game hunter well. It has been and continues to be offered in a staggering number of variations (most have 18.5-inch barrels), so you’re sure to find something you like in the lineup.

The popular Ruger American rifle was introduced in 2012 as a more affordable alternative to Ruger’s flagship Model 77 Hawkeye. Offered in multiple versions and numerous calibers using various types of magazines, the guns’ actions are mated to stocks via an integral bedding block that free-floats the barrel. The action employs a full-diameter bolt body and three-lug bolt, and the bolt handle has a 70-degree throw for ample scope clearance.

The rifle also has an adjustable trigger and a two-position tang-mounted safety. It has a reputation for being accurate out of the box. When I tested the Go Wild camo version in 6.5 Creedmoor, all five factory loads printed one-inch or considerably smaller average groups at 100 yards. That rifle now resides in my safe.

If you’re willing to pay for top-end quality, you can’t go wrong with the Winchester Model 70. The “Rifleman’s Rifle,” now made by Fabrique Nationale, is today as good as any version that came before and, in some ways, is quite a bit better. My own FN-made Model 70 Featherweight in .270 Win. shoots half-inch or better groups with ammo it likes.

The Remington 870 Express pump-action shotgun delivers all the functionality of the legendary Model 870 Wingmaster, but at a more affordable price. Featuring a receiver machined from a solid block of steel, the gun is offered in .410-, 20-, and 12-gauge variants, with most having vent-rib barrels of 26 or 28 inches. This no-frills gun has matte-black metalwork, a plain hardwood stock, and a single bead sight, but the action is non-binding and smooth with twin action bars. It will shoot 2¾- and 3-inch shells, and is available in compact and Jr. versions.

If you want a double-barreled gun for upland game, you’ll pay for it. There’s a big price jump from a pump gun to a double gun, but one of the greatest values in over-and-under shotguns remains the Beretta 686 Silver Pigeon I. A pair of slightly nicer Silver Pigeon II guns have been my go-to upland guns for many years because they fit me perfectly, point naturally, and paint birds from the sky.

Pump-action guns dominate our shotgun selections for one reason: they’re affordable. One that costs a little bit more is the Browning BPS, but it’s worth it. The BPS Field Mossy Oak Shadow Grass Blades model, a new-for-2020 version, is built just for waterfowl hunters. This gun has a redesigned stock and forearm for better fit and feel, full camo coverage, a larger trigger guard for gloved fingers, Inflex recoil pad, and an Invector-Plus choke system. One of the unique things about the BPS is that it ejects shells straight down, out of the line of sight, from the bottom of the receiver. At 8 lbs., it is not light, but that’s not critical in a duck blind. The 26-inch barrel is back-bored, meaning the bore diameter has been increased to maximum allowable specification, reducing friction between the shot cup and the barrel and reducing shot deformation for better patterning. The gun is truly ambidextrous thanks to a tang-mounted safety.

Many waterfowl hunters prefer an autoloader, but they usually cost quite a bit more than pump guns. One of the best bargains is the Franchi Affinity 3. The Mossy Oak Bottomland version is ideal for waterfowl hunters, featuring oversized controls and an inertia-driven operating system.

This may seem sacrilegious, but you don’t need a tricked-out shotgun with expensive optics to kill turkeys. I killed my first Rio Grande gobbler with the longest shot I’ve ever made on a turkey – in excess of 50 yards – using a plain black Stoeger P3500 pump-action shotgun equipped with only a red fiber optic front sight. The magic ingredients in that case were Stoeger’s extra-full turkey choke and Federal’s 3rd Degree shotshell. Chambered for 3½-inch shells, this gun is neither elegant nor clunky, but it has a slimmed-down forend and trim lines. It’s made with an aluminum receiver and steel magazine tube, and has dual action bars for non-binding cycling of the action. The bolt assembly rides between the rails, and the action utilizes a Benelli-style rotating bolt head. This is a working man’s shotgun sold at a working man’s price. If I were buying one today, I would spend a few dollars more for the version clad in Realtree Max-5 camo.

One gun that has the safety where I like it is a descendent of the time-honored Mossberg 500. It is the Mossberg 590 Tactical, a proven performer in decades of military and law enforcement use. Offered in multiple versions, the gun has 18.5- or 20-inch barrels, twin action bars, dual extractors, and an anti-jam elevator. You can set it up with lights or lasers using the tri-rail forend and adjust length-of-pull with a six-position adjustable stock. The tubular magazine holds 5, 6, or 8 shells, depending on the model.

Choosing the perfect concealed carry gun is a complex subject and, despite what the Glock fanboys will tell you, there’s no such thing as a perfect carry gun for everyone. One that comes close to being perfect for many is the Smith & Wesson M&P Shield 9mm. When first introduced, it helped to redefine the category and became immensely popular. It was affordable, easy to conceal, and reliable, with good ergonomics and a choice of 7- or 8-round magazines. You could have an external safety if you wanted one. And for a bit more money, you could get a slicker version from the famed S&W Performance Center.

My own Performance Center Shield has two ports in the barrel that align with lightening cuts in the slide to reduce muzzle flip. It also has one of the sweetest triggers you’ll ever find on a striker-fired pistol. The newer M&P Shield 2.0 pistol is an even better gun in many respects, including having a better trigger than the original.

That said, if you want to buy a Glock for concealed carry, look at a Glock 19 or the trimmer, single-stack Glock 43—or explore some of the many other options in an immensely crowded field.

There’s much to like in a basic AR-15, especially one that delivers quality at a bargain. Assuming you don’t strap enough accessories onto a gun to turn it into an anchor, a basic AR-15 is handy, affordable, accurate, and lightweight. Those virtues are evident in the M&P 15 Sport II rifle, an upgraded version of the original Sport, which became an instant hit because it could immediately serve in recreational and self-defense roles without breaking the bank.

The baseline model has a 16-inch barrel with six-groove rifling and a 1:9 rate of twist. There’s an adjustable A2 post sight up front and folding MBUS sight aft. Equipped with a six-position collapsible stock, the gun is compatible with a wide range of AR-15 components, making it easy to upgrade. The last one I tested, with a scope mounted, produced average groups of 1.34 inch and MOA best groups with factory ammo. It’s hard to argue with that sort of accuracy from a basic AR-15, especially when it’s backed by S&W’s lifetime service policy.

Weatherby Vanguard rifles have always delivered great performance for their price. Three reside in my safe, including a .257 Wby. Mag. that has accounted for more game than any other rifle in my collection. Weatherby wisely offers a Vanguard Synthetic Compact version that is well-suited to young shooters or people of small stature. This rifle comes with a 20-inch barrel and a stock spacer that lets you adjust length of pull from 12-½ inches to 13-5/8 inches. The gun has a one-piece machined and fluted bolt, three-position safety, and adjustable two-stage trigger. It’s guaranteed to shoot sub-MOA groups with premium factory ammunition, and is chambered for mild-recoiling cartridges, including .243 Win., 6.5 Creedmoor, 7mm-08 Rem., and .308 Win.

If you want to save about $100, look at the Mossberg Patriot Youth Super Bantam rifle. This one also has a 20-inch barrel and is offered with synthetic black or camo stocks. It features a fluted barrel, spiral fluted bolt, adjustable trigger, and Weaver scope base.

Many youngsters start out with pump-action shotguns, but some models may be too cumbersome or hard-kicking for them. A great alternative is the semi-auto Mossberg Youth Bantam SA-20. In guns of equal weight, autoloaders tend to be easier on the shoulder. I’ve shot quite a few game birds with the full-size SA-20 and SA-28, and am inordinately fond of them. They are, happily, quite affordable compared to most autoloaders. The Youth Bantam model is designed for younger shooters with a 20-inch barrel and 12½-inch length of pull. The gun comes with a “sport set” of five choke tubes and weighs just 5½ lbs., making it easy to handle and carry.

If you still want to start a kid out with a pump gun, take a look at the 20-gauge Remington 870 Express Compact Jr, which has a 12-inch length of pull and is equipped with an 18¾-inch barrel with interchangeable choke tubes. It weighs just 5¾ lbs.