How to Pick the Best Handgun Caliber For Hunting 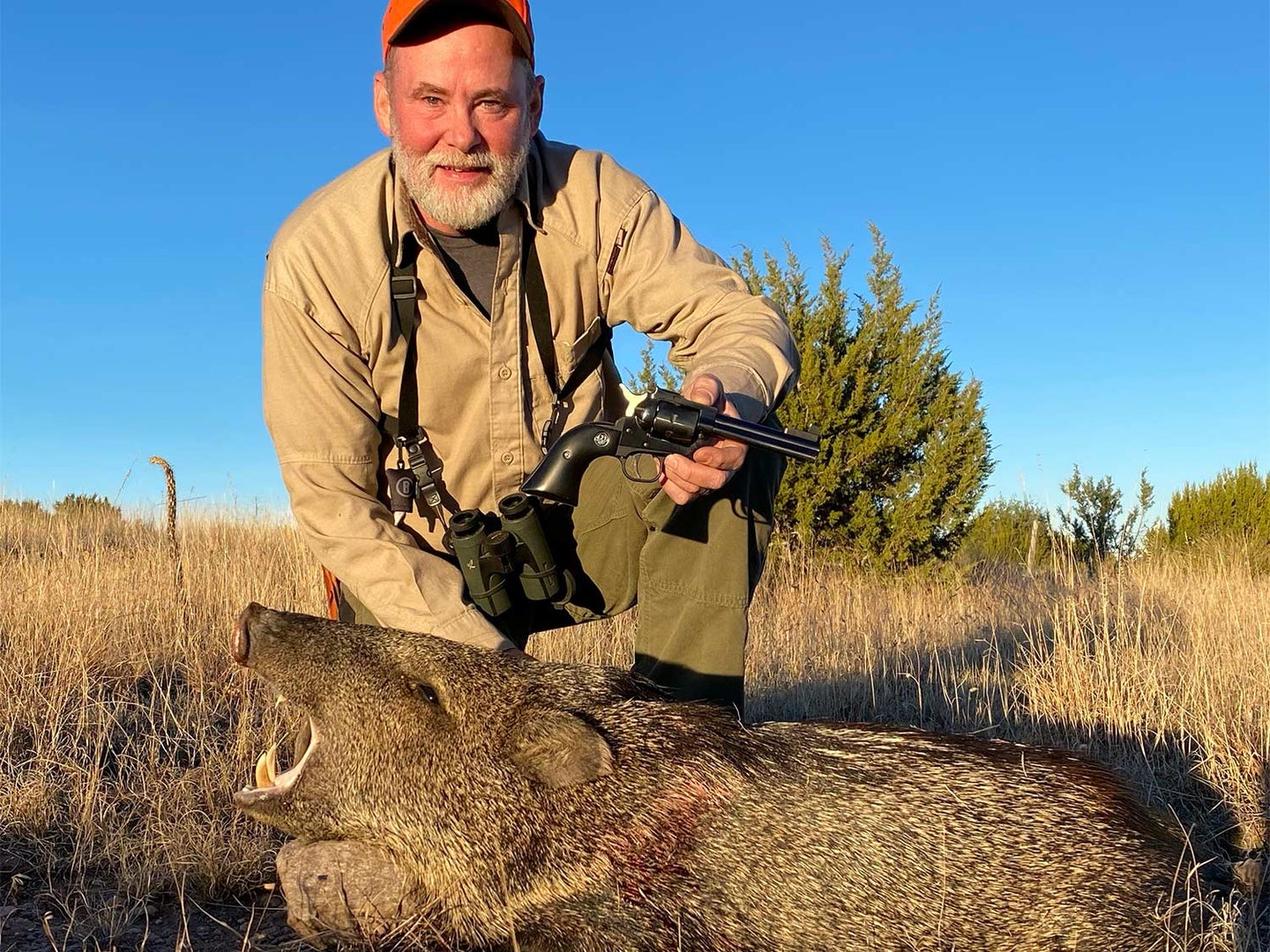 Matching the cartridge and load to the game being hunted is key for the handgun hunter. Richard Mann
SHARE

Handgun hunters do not have as many cartridges to choose from as rifle hunters. And, since handgun cartridges generate much slower muzzle velocities, load selection is critical when picking the best handgun caliber for hunting. Forget that nonsense about needing 1,000 foot-pounds of energy to kill a deer. That was just the opinion—one that’s been repeated too many times—of a gun writer with way too much time on his hands. Handgun ammunition intended for personal protection can work for hunting, but for the best results, you want a load purpose-built for taking game.

Penetration is critical and paramount. Exit holes put more blood on the ground quicker, and handguns do not cause near the amount of hemorrhaging as rifles. Matching the cartridge/load to the game you’re after is also important. You can kill any critter in the world with a .500 S&W, but that much power is unnecessary for most of what we hunt.

Here’s a look at 10 handgun hunting cartridges paired with a suitable load for hunting just about everything. Is there some overlap, and did we leave some options out? Sure. But if you follow this guide, the failures you experience will be because of bad shooting.

.22 Long Rifle: The Best Handgun Caliber For Hunting Small Game up to 30 Pounds

When hunting small game like squirrels and rabbits—and even larger critters like raccoons and fox—with a handgun, there’s no cartridge better for the job than the .22 LR. It has minimal recoil, minimal noise, and the ammunition—even the expensive stuff—is affordable. Load selection, however, is important. Common lead round-nose bullets penetrate well but do not damage much tissue, and some hollow point bullets will not achieve a velocity high enough to expand when fired from short pistol barrels. A better choice is a high-velocity hollow-point like the CCI Velocitor. With almost 100 foot-pounds of muzzle energy, it is one of the hardest-hitting .22 LR loads available. It’s also generally very accurate.

.32 H&R Magnum: The Best Handgun Caliber For Hunting Javelina and Small Deer up to 100 Pounds

Often overlooked as a hunting cartridge, the .32 H&R Magnum is very versatile. This is partly because .32 H&R Magnum revolvers will also fire .32 ACP, .32 Short, and .32 Long ammunition, but it’s mostly because the cartridge operates in a powerband between the .22 Long Rifle and .357 Magnum. It can take deer and feral hogs, but its true forte is animals weighing less than 100 pounds, like javelina. There aren’t a lot of loads in this chambering to choose from, but the unquestionable best for anything larger than a woodchuck is Buffalo Bore’s 130-grain deep-penetrating hard-cast load that generates 375 foot-pounds of muzzle energy.

.327 Federal Magnum: The Best Handgun Caliber For Hunting Deer and Feral Hogs up to 200 Pounds

Loaded to a maximum average pressure of 45,000 psi, the .327 Federal Magnum is one of the most powerful handgun cartridges commercially loaded. Because of its high velocity and slightly smaller diameter bullet, it will often out penetrate similar .357 Magnum loads. Like with the .32 H&R Magnum, the Buffalo Bore hard-cast load is excellent for big game. However, the new Federal 127-grain HammerDown load, which will leave a four-inch barrel at almost 1300 fps, should be more than sufficient for deer and feral hogs. The molecularly bonded bullet will expand well, and because it retains all of its weight, it will penetrate deep. The .327 Federal Magnum also generates .357-like muzzle energy with less recoil. But make sure you wear ear protection even when hunting. With ammo loaded to pressures this high, the guns are ear-splitting loud.

Read Next: The 10 Best Handguns and Long Guns for the Trail

.357 Magnum: The Best Handgun Caliber For Hunting Black Bears up to 400 Pounds

Contrary to popular belief, black bears are not all that hard to kill. What they can be is hard to stop if your shooting is bad and they become pissed off. For that reason, you need something that hits hard. The .357 Magnum is about the bottom end of a suitable bear cartridge when fired from a handgun and fortunately, due to the cartridge’s popularity, there are a lot of good loads to choose from. Ideally, you want a bullet that will expand wide and drive deep in order to deliver the most tissue destruction as possible. With over 500 foot-pounds of muzzle energy, the Federal Fusion 158-grain load is exactly that kind of load. The bullet’s jacket is fused to the bullet’s core, so it will expand wide and retain most of its weight while delivering bone-breaking, skull-crushing performance.

Smaller caliber cartridges like the .357 Magnum and .327 Federal Magnum will work well for feral hogs and wild boar. However, if you’ve done much hunting for either, you understand that sometimes when the shooting starts things can get a bit Western. This makes a cartridge like the 10mm, which is available in semi-automatics with a higher capacity than a revolver, a good choice. Originally developed for the now-defunct Bren 10 auto pistol with input from Gunsite Academy founder Jeff Cooper, the 10mm was once the choice cartridge of the FBI. After the introduction of the .40 S&W, its popularity started to wane. But now with the renewed interest in hunting with a handgun—especially semi-automatic handguns—the 10mm is more popular than ever. Though suitable for critters up to the size of elk, whacking hogs is where it shines, especially when loaded with the new 135-grain MonoFlex bullet in the Hornady Handgun Hunter line.

Read Next: The Best Handguns for Deer Hunting

Ballistically, there is a lot of evidence to support the notion that the .44 Remington Magnum is the best handgun cartridge for hunting big game. With the wide variety of loads available, it can deliver 30 percent more energy than the .357 Magnum, and be used for everything short of an African buffalo. It launches a big heavy bullet, hits hard, and leaves voluminous wound cavities. The only downside is recoil; it can be violent, particularly in lightweight or smallish handguns. (There’s a reason every used .44 Magnum comes with a half-box of ammunition.) For general big game hunting, elk, and everything smaller, the Winchester 240-grain Dual Bond load should work splendidly.

.45 Colt: The Best Handgun Caliber For Hunting Moose up to 1,300 Pounds

The .45 Colt cartridge has been around since the late 1800s and arguably won the West. Its original loading pushed a 250-grain bullet to about 750 fps and generated only about 300 foot-pounds of muzzle energy. That’s weak. Still, this load killed bandits, deer, and even larger critters. More modern 200-grain .45 Colt ammunition will generate about 450 foot-pounds of energy but that’s still relatively anemic. What many folks do not realize is that in strong handguns like the Ruger Blackhawk, the .45 Colt can be loaded to outperform the .44 Remington Magnum. There are not a lot of factory +P loads for this cartridge but the Buffalo Bore 225-grain XPB+P load at 1500 fps will generate more than 1100 foot-pounds of energy. That’s a level of wickedness that no Colt-toting cowboy could have ever imagined.

.454 Casull: The Best Handgun Caliber For Hunting African Buffalo up to 1,300 Pounds

When it comes to dangerous game—like an African buffalo that has the capability to stomp you into a blood puddle—it’s all about the bullet. It has to be incredibly rugged, and it has to penetrate very deep. To get that type of performance in a handgun, a non-expanding, mono-metal, or hard-cast bullet is necessary. And too, the bullet has to be heavy, and it has to be going fast. This type of performance is exactly what the .454 Casull was designed to deliver. It will push the 360-grain hard-cast Buffalo Bore load to more than 1,400 fps and generate more than 1,600 foot-pounds of muzzle energy. You won’t be shooting a .454 Casull revolver with one hand, but you will have a handgun that will not only kill a buffalo, but will stop one too.

.460 Smith & Wesson: The Best Handgun Caliber For Hunting Grizzly Bears up to 600 pounds

Anything you can do with the .460 Smith & Wesson, you could also do with the .480 Ruger. However, because there are a lot more ammunition options for the .460 S&W, it is probably the better option. Of course, the .460 will handle African buffalo, moose, and elk. And, lesser cartridges like the .45 Colt and .44 Magnum will also work for grizzly. For optimum handgun performance on a grizzly, it would be hard to find a better load than the Vital-Shok from Federal, loaded with a 275-grain Barnes XPB bullet. With more than 1,700 foot-pounds of muzzle energy and a rugged bullet that can withstand that force on impact and still hold together, it is a perfect choice as a combination load for a moose and grizzly hunt. In fact, if you like to fish in grizzly country and don’t want to carry a rifle, you could feel safe armed with a big .460 revolver and a cylinder full of this ammo.

Read Next: The 30 Best Handguns for Outdoorsmen

An African bush elephant can weigh as much as 6 tons, but a forest elephant will only weigh about 6,000 pounds. This does not mean you can use half the gun you would for a bush elephant to hunt a forest elephant. What it does mean is that, if you had to kill an elephant with a handgun, you’d need one hell of a gun to drop either. Aside from some proprietary cartridges, the only handgun suitable for the job is probably the .500 S&W. With the new Dangerous Game load from Buffalo Bore, the 500 S&W can push a 400 grain Lehigh mono-metal bullet to 1,575 fps and generate more than a ton of muzzle energy. While that might sound like a lot, the .375 H&H rifle cartridge—considered the minimum for elephant—generates twice that much energy. So, it might be a good idea to have a buddy along who is armed with a serious rifle.