The 10 Most Powerful Handguns in the World 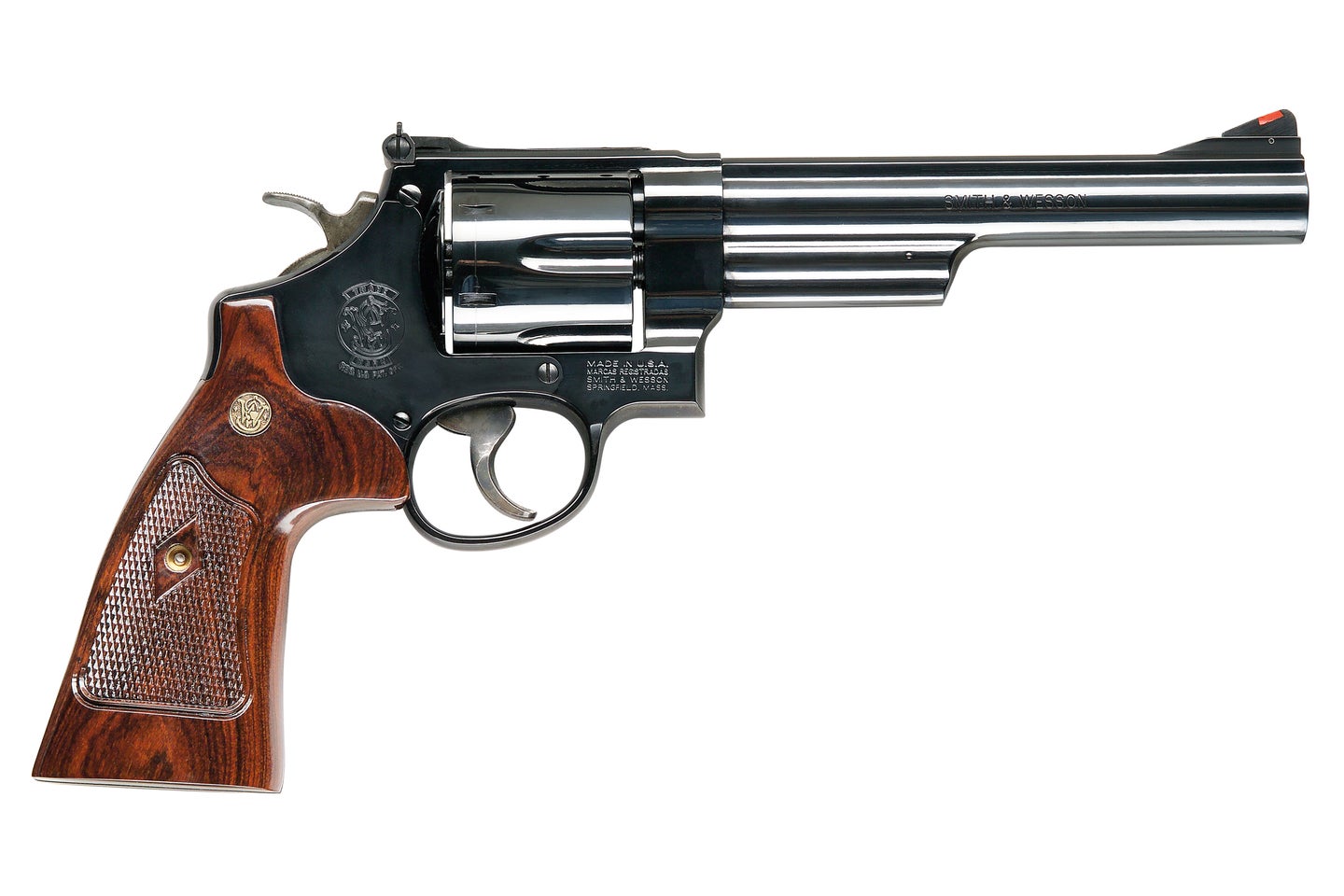 Handguns are generally considered to be low in power and high in portability. They were originally thought of, and still are, as self-defense tools for close-quarters combat. But the handgun has evolved over the years. Handguns today aren’t just concealed-carry firearms made to fend off bad guys. They’re also used for hunting the largest and most dangerous game in the world. We’re not talking about specialized single shots and bolt-action handguns either; we’re talking about semi-automatics and revolvers. The power of some of today’s handguns would make Sam Colt’s knees week.

What’s the best way to measure the power of a handgun? Muzzle velocity and energy are most commonly used, but the real power of a handgun is determined by the pressure—in pounds per square inch—that’s generated in the barrel’s chamber. As an example, the .38 Special is a very popular handgun cartridge and standard loads generate 17,000 psi while +P loads produce 20,000 psi. By comparison, some of today’s bad-ass handguns work with cartridges generating more than three times that much pressure. Based on pressure, here’s a look at 10 of the most powerful handguns and the cartridges they fire. You might be surprised which ones generate the most pressure and how that translates to power.

The .45/70 Government is not a revolver cartridge, and it was never intended to be fired in one. However, humans, being the enterprising creatures we are, sometimes pay no intention to what was intended. The Magnum Research Big Frame Revolver (BFR) is available in .45/70 and even .30-30 Winchester as well as about every cartridge on this list. It is indeed, as the acronym suggests, a big frigging revolver. At only 28,000 psi, from a pressure standpoint, the .45/70 is not that powerful. But who cares. This is a rifle cartridge in a revolver. It will push a 500-grain bullet to 1150 fps and generate 1468 foot-pounds of energy at the muzzle. With a power factor of only 575, it’s not the most powerful cartridge you can get in a handgun, but it’s close, and you can share ammunition with your Marlin 1895 lever-action rifle.

Most of the really powerful handgun cartridges are housed in revolvers, but the 50 Action Express (AE) is an exception. It will push a 300-grain bullet out of the barrel of a Magnum Research Desert Eagle at 1475 fps and generate almost as much muzzle energy as the .45/70. However, from a pressure standpoint, the 50 AE is not that powerful. It only generates 35,000 psi of pressure in the barrel’s chamber. Still, with a power factor of 442, the 50 AE is likely the most powerful handgun cartridge you can get in a semi-automatic pistol.

You knew this one was on the list, but you probably thought it was a lot more powerful than it really is. After all, Harry Callahan said so, right? With one of its most powerful loads, the .44 Magnum will drive a 304-grain bullet to 1325 fps generating 1188 foot-pounds of energy, at only 36,000 psi. It has even proven to be enough for African buffalo. Interestingly, many consider full-power .44 Magnum loads very unpleasant to shoot, and with a power factor of only 404, what does that say about the recoil of some of the other cartridge/handgun combinations on this list? However, from the standpoint of energy generated in relation to pressure, the .44 Magnum is one of the most efficient hard-hitting handgun cartridges of all time.

Read Next: 25 Shotguns, Rifles, and Pistols of the Rich, the Famous, and the Infamous

Yeah, I know what you’re thinking, what is this pipsqueak cartridge doing on this list? Well, to make this list, a cartridge has to generate a lot of pressure and the .327 Federal Magnum does just that. Maximum loads will peak out at an amazing 45,000 psi. (The .357 Magnum only generates 35,000 psi.) All that pressure is what is required to push the small 0.312-caliber bullet to high velocity. Though unimpressive when compared to the other cartridges on this list, the .327 Federal Magnum will force a 130-grain bullet out of a 4.5-inch barrel at 1300 fps, generating 487 foot-pounds of energy for a power factor of only 169. Based on the pressure generated, this is not a very efficient cartridge. But it will do just fine for deer and hogs, with much less recoil than anything else we’re looking at here.

The 480 Ruger fires a 0.475-caliber bullet, and when it was introduced in 2003, it was the largest caliber production revolver cartridge available. Considering it only generates 48,000 psi, with a power factor of 492, it is very efficient. The 1310-foot pounds of energy it will generate with a 410-grain bullet at 1200 fps is about 10 percent more than a .44 Magnum, and you can expect an even higher percentage of recoil to come with it—especially when fired from a 2.5-inch barreled Ruger Super Redhawk Alaskan. However, from the standpoint of recoil and power, it is an extremely well-balanced revolver cartridge for hunting the biggest of big game.

Of all the cartridges on this list, this is probably the most surprising. Designed by Smith & Wesson just before the turn of the century, the .356 TSW was intended for competition. The idea was to create a cartridge that would allow for maximum handgun capacity, while still meeting the Major power factor required for IPSC Limited competition. From that standpoint, the .356 TSW was a success, and it secured its place in history as the most powerful—by pressure standards—semi-automatic handgun cartridge. However, rule changes pushed it out of competition. Similar in size to a 9mm Luger, it will push a 124-grain bullet to 1450 fps for 578 foot-pounds of energy and a power factor of 179. Only very few factory handguns were ever chambered for this cartridge.

Though often heralded as an extremely powerful revolver cartridge, the 475 Linebaugh—even though it is loaded to 50,000 psi—is not that much more powerful than the .44 Magnum. The large caliber does allow for heavier bullets though. It’ll dive a 420-grain projectile to 950 fps and generate 841 foot-pounds of energy with a power factor of 399. While it’s not equal to the .44 Mangum in terms of energy, those big, heavy bullets will penetrate deep and make a very big hole in the process. It has become a very popular load for large and even dangerous game, and when paired with an exquisite revolver like the Freedom Arms Model 83, it is well adapted to taking on anything walking Earth.

The 454 Casull is the original monster-killing revolver cartridge. It was developed 64 years ago but remained a wildcat cartridge until Ruger chambered it in their Super Redhawk in 1997. Now, it is one of the most popular cartridges for handgun hunters who want to knock what their shooting at into next week. The 454 Casull also shares the distinction of being one of two of the hottest loaded—by chamber pressure standards—revolver cartridges of all time. It uses all 65,000 psi of its chamber pressure to push a 325-grain, .45-caliber bullet to 1525 fps, generating 1678 foot-pounds of energy and a power factor of 495. The 454 Casull has been used to take every big game animal on the planet, and if you ever shoot one, you’ll never forget it.

Read Next: The 30 Coolest Handguns for Outdoorsmen

Loaded to the same chamber pressure of 65,000 psi as the 454 Casull, the 460 Smith & Wesson is the most powerful revolver cartridge in the world. Not only is it a very high-pressure cartridge; it’s also extremely efficient. It’ll scoot a 260-grain bullet out the barrel at an amazing 1900 fps and generate more than twice the energy of the best .44 Magnum load. That 2885 foot-pounds of energy translates to a power factor of 684. For maximum effectiveness on the largest and most deadly critters on this and possibly any other planet, the 460 Smith & Wesson is the way to go. Not only will it hit like a freight train, but it also shoots flat. If you think you’ll remember shooting a 454 Casull for the rest of your life, shooting the 460 Smith & Wesson might just give you nightmares.