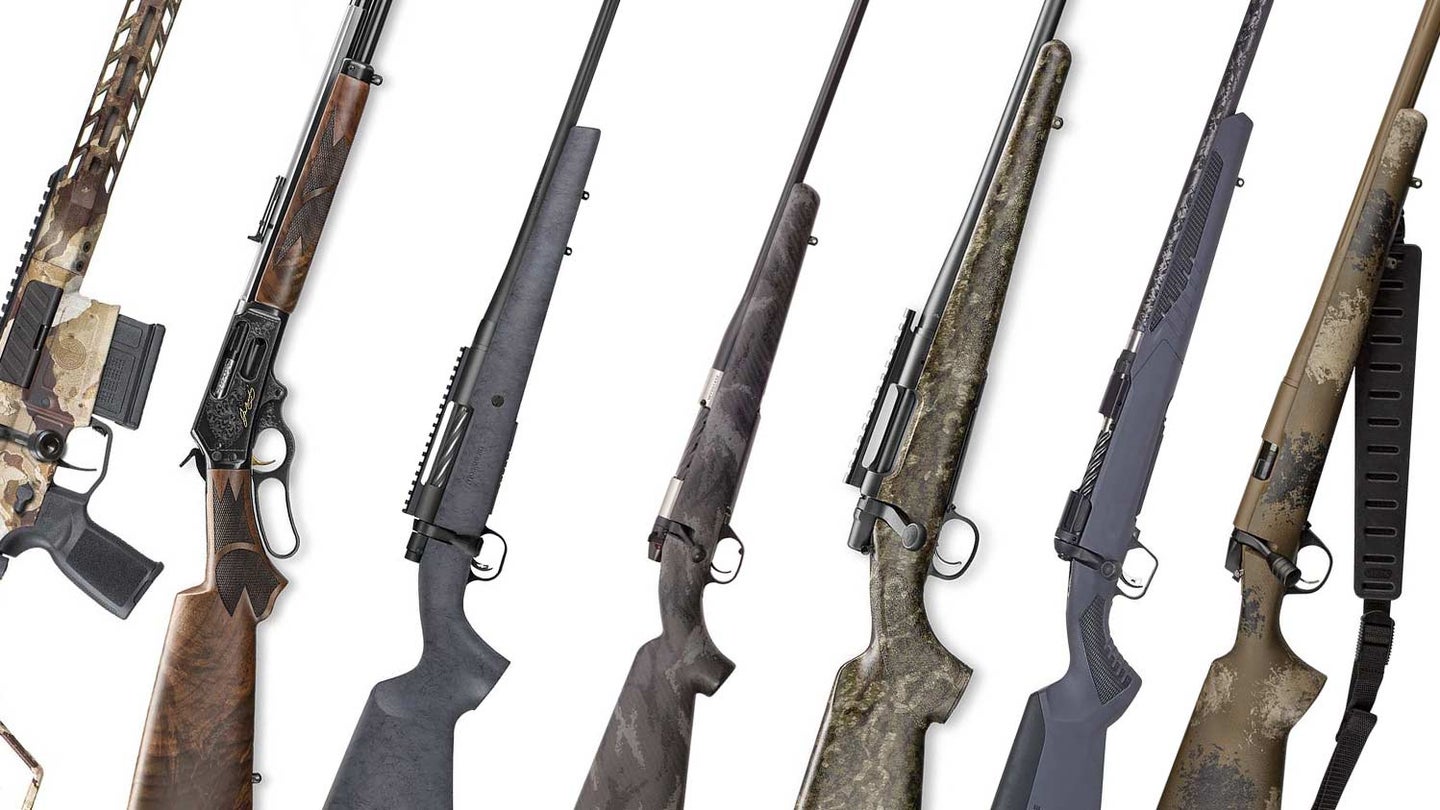 Lightweight and long-range are the big trends in this year’s crop of new sporting rifles. Field & Stream
SHARE

Based on the new offerings on display here at the SHOT Show in Las Vegas, I’m ready to call 2020 the return of the light rifle. Over the last decade or so, thanks to the influence of long-range competition rifles, the weight of sporting rifles inched steadily upward, then plateaued, and only recently showed signs of going the other way. Now, with at least four new guns under 6-1/2 pounds and one under 5, there’s no doubt which way the wind is now blowing.

Wispy hunting rifles are nothing new, of course. They were all the rage in the 80s. What is new is the combination of light weight and features common to long-range precision guns. In terms of caliber, the 6.5 Creedmoor still dominates, but it’s getting some competition from other six-fives. History does repeat itself, but it looks a little different each time—and this time around, the light-rifle trend has a 0.264-inch hole in the middle of it.

Weatherby set itself some lofty goals before they got to work on this one. They wanted to produce the best backcountry rifle-and-cartridge combination ever, in a 5-pound package that delivers magnum performance and doesn’t cost as much as a used pickup truck. The result is the Mark V Backcountry Ti, chambered for the company’s brand-new 6.5 Weatherby RPM cartridge, and while I’m not ready to call it the best ever, I’m am impressed. The rifle hits just below the target weight, the new round’s ballistics are eye-popping, and the price can’t be beat for this level of quality and performance. The Backcountry Ti is fitted with a TriggerTech FieldTM trigger and comes with the Mark V sub-MOA accuracy guarantee. In addition to the new 6.5, it’s available in a dozen other long-range cartridges. $3,349 to 3,449; weatherby.com

If you were going to have a custom gunsmith build you sub-6-pound rifle for backcountry hunting that was also ideally adapted to shooting at longer-than-normal distances, what features would you want included? How about a PROOF Research stainless-steel barrel wrapped in carbon fiber, a Melonite-coated skeletonized receiver, a stock that is adjustable for comb height and length of pull, and a trigger that is adjustable for pull weight? Custom assembled, this would all cost you north of three grand, but Savage has put all of these features together in the new 110 UltraLight and paired it with a factory blueprinted 110 action, fitted with an AccuTrigger, and drilled for 8×40 scope base screws, at a suggested retail price of just under $1,500. It’s a heck of a rifle for the money. $1,499; savagearms.com

Remington continues to expand their Model Seven lineup, and for 2020 they’ve added a new version of this fantastically lightweight and quick handling rifle. The Model Seven Threaded Mossy Oak Bottomland weighs in at 5.5 pounds, comes with a 16.5-inch barrel with 5R rifling, and has, as you might have guessed, a threaded muzzle to accept a brake or supressor. The stock is decorated in Mossy Oak Bottomland camo, and a 20 MOA Picatinny rail is included as standard equipment. And, yes, it is available in 6.5 Creedmoor. This compact rifle should be ideal for any hunter who loves a quick-handling rifle—and his hearing. $1,595; Remington.com

The Mossberg Patriot platform, with its reliable push-feed action and well-designed detachable magazine, delivers a great balance of performance and affordability. For 2020, Mossberg has added a new Patriot to the lineup—the Long Range Hunter. The rifle has a fluted barrel that’s threaded and capped, but what really sets this gun apart is the stock, which has a raised comb to help properly place your eye behind large, long-range optics that necessitate high mounting. It also comes with a scope rail, a generous recoil pad, and dual sling-swivel studs. Available in 6.5 Creedmoor, .308 Winchester, 6.5 PRC, and .300 Winchester Magnum. $721; mossberg.com

One of the coolest production rifles you can buy this year is Marlin’s 150th Anniversary Rifle. The company has offered similar rifles out of their custom shop for years, but nothing exactly like this. The Anniversary Rifle will be offered in limited numbers and is chambered—as it should be—in 444 Marlin. It comes with a 24-inch, half-octagon/half-round barrel and a C-grade walnut stock with an S-style grip and vintage checkering pattern. The metal is a high-polish blue with an engraved receiver and lever. Skinner ladder sights and a commemorative box are standard. And for all this lever-gun glory, the price is a surprisingly affordable. $1,899; marlinfirearms.com

Last year CVA shook up the in-line muzzleloading market with the Paramount, a true 300-plus-yard smokepole, designed to shoot super-magnum charges and drop game way out there. For 2020, CVA has introduced the Paramount Pro, which is the same excellent rifle but with several smart upgrades, including a Grayboe fiberglass stock, a TriggerTech trigger, and a Cerakote finish. The standard Pro model is a .45 caliber with a 26-inch stainless, free-floating barrel that’s threaded for a brake or suppressor. But there is also a .50 caliber Paramount Pro Colorado version that comes with a Williams Peep Sight and is meant to comply with the stricter regs of certain western states. Both models come with a lifetime warrantee. $1,668; cva.com

And now for something completely different. Maybe you figured it was inevitable that Sig Sauer would introduce a bolt-action rifle, but I’ll bet you never envisioned this. The new CROSS was designed with input from hunters, military snipers, and top long-range shooters—folks who know how a rifle should perform. It was also made to especially appeal to backcountry hunters who wear out their boots faster than you wear out truck tires. The rifle weighs less than 6.5 pounds, has a folding stock, one-piece receiver, and is chambered for the 6.5 Creedmoor, .308 Winchester, and Sig Sauer’s new high-pressure cartridge, the 277 Sig Fury. It does not look like your granddad’s deer rifle. Hell, it doesn’t even look like your daddy’s deer rifle. But the Sig Cross might just be the future of deer rifles. $1,799; sigsauer.com

Winchester has a new XPR this year, and it’s one cool little rifle. What makes it cool? Well, being and XPR, you know it’s well-made and you can count on it being accurate, plus it won’t break the bank. But what sets this Stealth model apart is the 16-1/2-inch button-rifled barrel that’s threaded for a suppressor, which means you can put a can on it and still have a pretty handy rifle. Barrel and receiver have a Permacote black finish and the latter is topped with a Pic rail for mounting an optic. Like all XPRs, this one has the same excellent M.O.A. trigger system you’ll find on the more expensive Model 70. Available in nine short-action calibers, including 6.5 Creed, 350 Legend, and 6.5 PRC, the 6-pound, 8-ounce Stealth promises to be a great truck gun or ranch rifle—and one that might just save your hearing in the bargain. $619; winchesterguns.com —Dave Hurteau

Benelli’s first-ever bolt-action rifle, the Lupo is one of the few truly brand-new rifles for 2020, and the company has gone all out to make sure it’s like no other. The rifle incorporates seven exclusive Benelli patents in order to provide next-level ergonomics and a custom fit. The black-synthetic stock accepts inserts in the comb to perfectly align your eye behind the scope while getting a proper cheek weld. The length-of-pull can also be adjusted, but on this stock, it’s done in the wrist area. This makes sense because if you are a larger-framed person, your hand is probably larger too, and this will help you position your finger properly on the trigger. The 7-pound Lupo also has a detachable magazine, integral sling swivel attachments, a sculptured bolt that enhances feeding reliability, and a recoil-reduction system built into the stock. And it’s a shooter, too, with a 3-shot sub-MOA guarantee. It will initially be available in .270 and .30-06 with a 22-inch barrel, and .300 Winchester Magnum with a 24-inch barrel. $1699; benelliusa.com

Kimber has a long history for offering fine lightweight bolt-action rifles, and for 2020 they have introduced what looks to be another winner. The Open Range features a 24-inch PROOF Research carbon-fiber-wrapped stainless-steel barrel with a medium-heavy contour. The muzzle is threaded, and a screw-on protector is included. The trigger is adjustable, and the stock, which is available in black or camo is made of carbon fiber. The rifle is built on Kimber’s 84M action, which features the famous Mauser-style claw extractor. It’s chambered for the .308 Winchester and, you guessed it, the 6.5 Creedmoor. It isn’t cheap, but if you want to climb high and shoot long with a fine rifle that weighs only 6 pounds, your wallet is bound to take a hit. I haven’t had a chance to shoot the Open Range Pro Carbon yet, but on looks alone it seems like money well spent. $3,100; kimberamerica.com