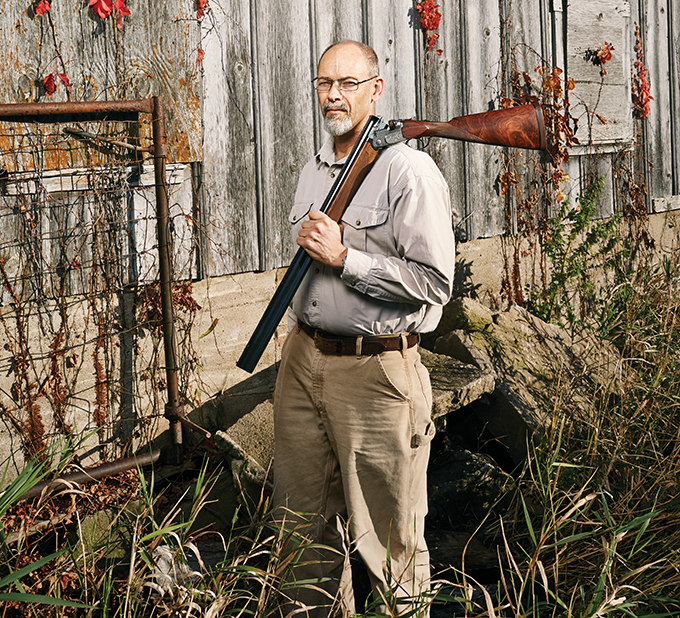 The author with the Beretta ASEL that once belonged to his father. Nathan Kirkman
SHARE

To celebrate the 125th anniversary of Field & Stream, we’re going to share some of our favorite stories from the history of the magazine. Every day for the rest of the year, we’ll republish a new F&S Classic on the website. Today’s entry, “Dad’s Gun” by Phil Bourjaily, was published in February 2015. You can find the complete F&S Classics series here.

My father’s shotgun, like my father’s interest in hunting, was almost completely worn out the first day he put it in my hands. That was in the winter of 1979, still one of the snowiest, coldest ever in Iowa. My friends had gone back to school, while I was snowbound. Dad, who rarely hunted anymore, said, “We could go pheasant hunting.” I had never been hunting growing up and never wanted to go, but there was nothing else to do.

He grabbed his Auto-5 and handed me the Beretta ASEL my mother had given him as a gift several years earlier. A handmade boxlock o/u built in the ’50s and ’60s in the same shop that crafts Beretta’s high-grade SO sidelocks, the gun had seen better days: Its stock was cracked through and scratched all over; the fore-end gouged and splintered; the checkering smashed flat; the action loose; the ejectors balky; the rib dented; the oil finish worn; and the bluing faded to gray and spotted with rust. There was an oval hole in the stock where the silver shield for his initials had fallen out.

You wouldn’t know to look at the gun, but my father’s serious hunting days only lasted a dozen seasons or so. During those years, he would go straight from the field to work, teaching his fall classes in muddy hunting clothes, with his dog and gun out in the car. When he picked me up at school, he’d drive home by way of the marsh so he could scout ducks. He used the Beretta hard and put it away wet and dirty. The gun endured the indignities suffered by all duck guns, plus some more of Dad’s devising, like the red nail-polish rear sight he painted on it for shooting deer slugs and the scar in the fore-end where he once used the gun to push down the top strand of a barbwire fence so he could step over it.

Toward the end of our hunt—after he and I had missed every shot we took—I made a long right-to-left crossing shot on a rooster that tumbled into the grass when I pulled the trigger. From that moment on, all I wanted to do was hunt.

My father, though, wanted something else. His lost enthusiasm for hunting mirrored his dissatisfaction with everything else about his life in Iowa. Not long after that pheasant hunt, he left my mother, married a former student, and accepted a job at another university. His Beretta went with him, although he didn’t use it much—a little for desert quail and doves in Arizona, then a time or two for ducks in Louisiana when he moved there. About 10 years after our first pheasant hunt, Dad hung up his 12-gauge. Age and a nagging tennis shoulder forced him to switch to a 20-gauge autoloader, an old Remington 11-48 he found in a pawnshop.

He sent me his old gun.

I saved up until I could afford to ship the gun to Orvis, where the gunsmiths tightened, straightened, blued, refinished, filed, and glued the gun until it looked almost new. I had them open the chokes to IC/M so it could be my full-time pheasant gun. It was a pretty gun when I got it back—deadly, too.

When they asked what initials I wanted on the new silver oval on the stock, I chose mine, not my father’s—a declaration of the distance that was growing between us. He had a new family and life that I felt no part of, and I never forgave him for leaving my mother. Both of us would’ve liked to have been closer, I think, but neither ever found the right words to say.

A few years later, I had Briley put tubes in the barrels so I could shoot steel with the gun because, like my dad—and almost no one else—I hunted snipe. I remember the times when I was very young and he would come home happy, wet, and tired from the Iowa River bottoms with a bag of bedraggled long-billed birds. My own sons will have that memory of me, too.

It wasn’t until I took a hard fall in the field and broke the stock of another gun that it occurred to me I might want to be a little more selective about when I shot the Beretta. I have lots of other guns now, and confess that Dad’s gun is a safe queen. Despite the wonders worked by the Orvis shop, it still needs a little attention. The slender fore-end rattles where it has warped away from the barrels. Before I pass the gun to one of my sons, I hope to have that repaired.

My mother gave me a video of my father hunting with this gun. The movie was shot to be part of a promotional short about hunting. It was filmed in 1965, when my father was almost 15 years younger than I am today. He takes the Beretta and his Weimaraner, Moon, out on a cold day of pheasant hunting on our farm. Moon points a rooster and my father shoots it. There’s no sound to the film. The bird flushes silently and falls to an unheard shot. My father looks solemn throughout.

The film was made just a few months after my family had set out for the Des Moines zoo on my sister’s birthday. On the way there, my father had to avoid another car that pulled onto the highway. He swerved out of our lane and into the path of an oncoming semi. I was uninjured in the front seat. My sister and her friend in the back were thrown from the car and killed.

As I grew up, my father never talked to me about the accident or about my sister. We kept none of her things and had no pictures of her in the house. It was almost as if she had never lived. Looking back now as a parent of two grown sons, I can only begin to imagine the grief and guilt my father felt. He kept his feelings hidden, bearing them with silence and, too often, with alcohol. I don’t know—because he never talked about it—but I think ultimately he couldn’t stand his life in Iowa and had to start over.

I was 7 when I first saw the movie. After it ended, I asked to see it backward. The smoking empty hull popped back into the chamber before the bird fell up off the ground and into flight. Dad and Moon backtracked out of the cold and into the warm house.

I was lucky to have one last good visit from Dad just a week before he died four years ago. There is a lot I wish I had said to him, and even more I wish he had said to me. This gun is what I have left of my father, and it is not enough. What I want is to play that movie backward again and rewind the years.