How to Clean a Rifle

If you don’t de-foul your gun, sooner or later it will fail you. Here’s how to do the job right 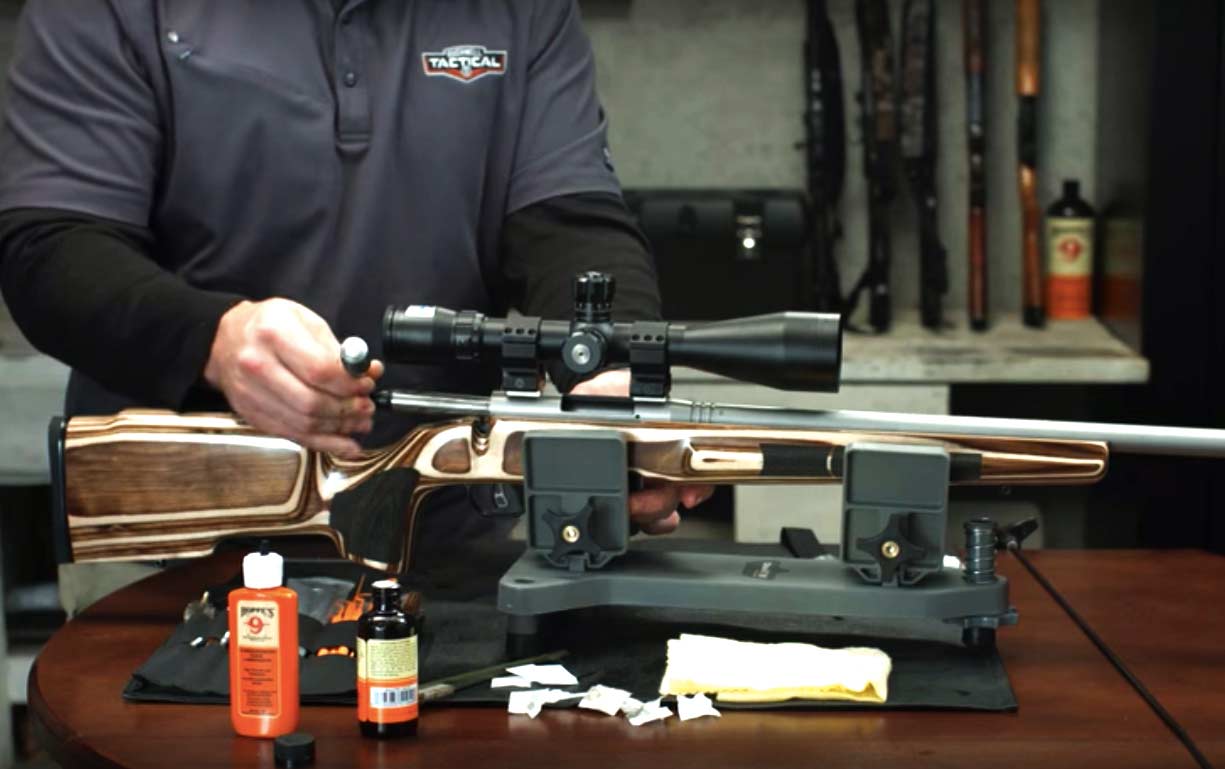 Stop picking at yourself and pay attention to the following immutable truths about rifle cleaning:

What You Need to Clean a Rifle

There are all sorts of quality gun-cleaning products out there. Here is a list of what I use.

How to Clean a Rifle Bore in 6 Steps

Having made sure the rifle is unloaded, clamp it in the gun vise and remove the bolt. (I’m assuming a bolt-action or an AR.) Put a couple of drops of CLP on a heavy 12-gauge patch and wipe off the bolt. Dip a Q-tip in powder solvent and clean off the bolt face, including under the extractor.

Now, wet a patch with powder solvent, impale it on a jag (do not use a slotted tip) of a size that gives you a snug fit, and run it up the bore. One trip per patch. Do this three times.

Dip a clean —I say again, clean, meaning one that you have previously hosed down with Gun Scrubber—bronze brush into the powder solvent and give it 15 strokes each way up and down the bore. Why 15? Why not 15? Do 14 or 16 if it makes you happy. Remove the brush, hose it down again, and put it aside to dry. Wipe off the cleaning rod with a paper towel.

Take your patch rod, and put three solvent patches up the bore. The last one should come out nearly white. When it does, follow with a dry patch. You are now done with the powder fouling. Wipe off the muzzle with a paper towel to remove whatever gray gravy drooled out the front end.

Put a Kroil patch up the barrel. Then take a 12-gauge patch and wrap it around an old, worn-out bronze brush so that it gives you a tight fit in the bore. Take a good-sized glob of J-B out of the jar and work it into the patch. For starters, give it 20 strokes up and down the bore. Don’t let the patch get clear of the muzzle. When you see it start to appear, reverse course and pull it back. After 20 strokes, the patch should turn black.

If you think you’re done, run a solvent patch and then a dry patch up the bore and take a look with your borescope. (Do not get J-B or oil or anything else on the lens of your scope. You will regret it.) If you see no copper, or just a faint wash of copper here and there, you’re done. If you see gobs and gouts and lumps and streaks, it’s back to the J-B. A rough bore can keep you at this forever, and I’ve replaced more than one barrel because cleaning it was just too difficult.

If you don’t have a borescope, run a solvent patch up the bore and let it sit, muzzle slightly down, for a couple of hours. Run another solvent patch through, and if it comes out clean, you’re done, but if it has green or blue stains, back to the J-B.

If you’re cleaning a barrel that’s .25 caliber or smaller, substitute Hoppe’s No. 9 Copper Killer for the J-B. You don’t scrub; you just leave the bore wet overnight and run a new patch through it in the morning. This process can take a week. Hoppe’s, by the way, has a powerful, sickly sweet odor that smells like a Transylvanian whorehouse** on Vlad Tepes Day. But it works.

Some barrels copper-foul much worse than others. As a rule, the more you spend on a barrel the smoother it will be and the less it will foul. But every barrel fouls to one degree or another.

Do break-in procedures work? I doubt it. I’ve had one or two cases where a barrel suddenly began to group as I reached the end of the process, but I’ve had far more break-ins that made no difference at all.

I haven’t mentioned the ammonia-based copper killers like Sweet’s or Barnes CR-10 because I don’t use them any more. They work, sometimes, but if you forget and leave the stuff in your bore for more than 15 minutes, they will pit your bore but good, and since I’m at the age where I forget stuff, I’m unwilling to take the chance. Also, they’re hell on stock finishes.

With a bolt-action, go easy on the Break-Free. And take care to get nothing at all on the trigger. With an AR, be liberal, and make sure that you do lubricate the trigger with grease, not oil. Geissele recommends ALG Go-Juice 0000 Very Thin Grease, and who am I to argue with Geissele?

ARs, the good ones, can run even when very dirty, but clean them anyway. Civilian autos, like the Remingtons, do not run at all when they get good and dirty. A friend of mine hunted with a Browning BAR that perpetually jammed on him because it was perpetually filthy, and I suggested that it might be nice if he cleaned it once every couple of decades.

Take a cue from the military, whose lives depend on their firearms going bang. They want them immaculate. And immaculate is a good way to go.

* I recently wrote somewhere that Gun Scrubber is so versatile that it might even cure leprosy. This was not an invitation to spray any leper that you happen across. At the very least, ask permission first. The poor soul has enough to worry about.

** This is artistic license. I have never been in a Transylvanian whorehouse on Vlad Tepes Day.