From budget guns to long-range tackdrivers, these rifles are the new classics of deer camp 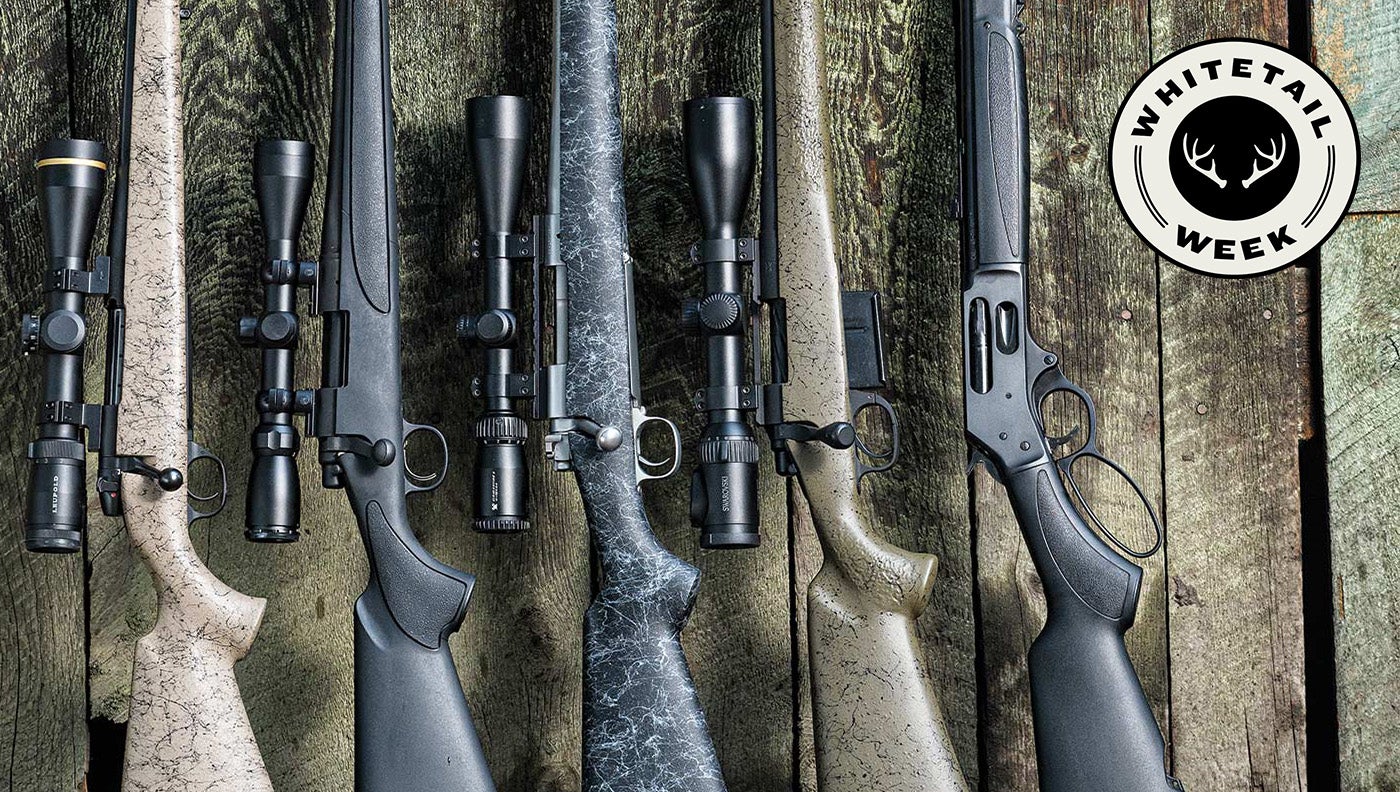 Boiled down to the essentials, a proper deer camp requires only a few things: a source of fire for cooking and warmth; coffee in the morning and sipping ­liquor in the evening to enjoy around said fire; and a gun rack—the centerpiece of camp.

A deer rifle is a magnificent thing—a tool perfected to work with the human form to fulfill a timeless purpose. Sitting at the crossroads of design, function, aesthetics, and tradition, it’s no wonder these implements are revered by ­hunters.

Compared to the old classics, this collection of modern rifles is diverse, reflecting a variety of shapes, colors, sizes, and most importantly, niche configurations that would have bewildered our forefathers. ­Purpose-­built rifles for applications like mountain hunting or long-range shooting look quite different than the deer guns of a generation ago.

Still, if you grabbed any rifle shown here, worked the action, and brought it up to your shoulder, you’d recognize immediately why it deserves a place in today’s pantheon of modern classics.

Any bolt action that has stood the test of time, is pleasing to the eye, and functions exactly as it should can be a classic. If it has useful upgrades and remains relevant to today’s hunters, it’s a new classic. Like these two.

The T3 was unveiled in 2003, and it turned a lot of heads for its performance and value. With the arrival of the T3x action in 2016, the rifle also added a replaceable grip, a metal bolt shroud, and an enlarged loading port.

This newest iteration, the T3x Lite Roughtech, is the best yet. The barrel is threaded for a suppressor or muzzle brake. The three-round single-stack box magazine is totally reliable. The two-lug action has a shortened 70-degree bolt throw, and the slightly oversize bolt handle is easy to work. Plus, the rifle maintains the standard of accuracy that Tikka has become known for, easily printing sub-MOA five-shot groups in my 6.5 Creedmoor sample. This rugged rifle will be a favorite of American hunters for years to come.

Unless you’ve been in a coma since 1936, you’re probably familiar with the Model 70′s full-length Mauser claw extractor, controlled-round feed operation, three-position safety, and other often-touted features.

The Extreme Weather SS model adds a stainless-steel ­action and a fluted barrel as well as an attractive and strong synthetic stock with a raised cheekpiece.

Scoped, the M70 shown above, in .30/06 with a 22-inch barrel, weighs exactly 8½ pounds. This places it in a sweet spot for big-game hunters, especially those who chase deer. The cartridge is perfect, the weight is perfect, and the overall length and balance of the rifle is, well, perfect.

By definition, these economy-class rifles are no-frills guns—even a little rough around the edges in ways. They also happen to make up the majority of deer guns sold in this great nation of ours. You’re not likely to see one prominently displayed on a wall as an indication of the owner’s pride. But where you will find them is strapped across the handlebars of a muddy four-wheeler, sitting butt down in the muck of a cedar swamp, or slung over the shoulder of a young hunter busting through brush on public land before dawn to gain an edge on the competition.

These two rifles are excellent examples of the type. Both are combo packages that come with pre-mounted 3–9x40mm scopes that are basic but functional.

The ADL Synthetic allows just about any hunter to own one of the most iconic rifle actions ever made. It has a blind maga­zine with a 3+1 capacity in 6.5 Creedmoor, the most popu­lar chambering. Most groups from my test rifle were about 1½ inches, but it managed some just over an inch. Despite the company’s recent shakeups, with bankruptcy and new ownership, there are plenty of used and even some new ADL Synthetics out there, and at bargain prices.

This rifle has a street price of under $400, which Savage achieved by giving ergonomics and aesthetics a back seat to cost-­effective manufacturing. For example, the name Axis is not machined into the receiver but molded into the plastic stock instead. While most Savages have the adjustable ­AccuTrigger, the Axis comes with a heavy brute (6 pounds 10 ounces) that I had to fight with to get the best accuracy from the rifle. However, that accuracy is still quite good with quality hunting ammo. My five-shot groups were about 1 inch or a bit more. The detachable box magazine is a nice feature, and the oversize safety, while broad as a beaver’s tail, is effective.

The ideal mountain rifle is one that pulls your panting carcass up the hill as you pursue high-­altitude mule deer and—this is something of a secret out West—­surprisingly large backcountry whitetails. Hunters want these rifles to be as light as possible. To get there, gunmakers trim away metal, mold thin-­walled stocks from carbon fiber, replace steel with lightweight alloys, and turn barrels down to the diameter of drinking straws.

Performing this magic and still producing a rifle that shoots well is not a given, so when a gunmaker cracks the code, hunters line up, happily brandishing their credit cards.

Glen Seekins, a backcountry hunter from Idaho, has created a nearly perfect mountain rig with the new Havak Element. Mine, in 6.5 PRC, weighs 5 pounds 9 ounces. The stock has a broad, hand-filling fore-end and a vertical grip with a palm swell, a spillover from Seekins’ background as a competitive long-range shooter. The barrel also has a heavier contour than most mountain guns, which helps with the rifle’s excellent accuracy. It’s threaded for a muzzle brake too.

The Element cuts weight in other areas. The receiver is aluminum and the raised portions of the integral Picatinny rail are skeletonized. The three-round ­carbon-­fiber maga­zine weighs next to nothing and as a bonus can run 6.5 PRC rounds of up to 3.14 inches in length, meaning handloaders can seat their bullets long.

Weatherby has a number of fine mountain guns in its lineup, but for my money, the Mark V Weathermark LT is the best value. It’s similar to the flagship Backcountry and Backcountry Ti, but it has a stock of fiberglass rather than carbon fiber, and the action is made of steel, unlike the Ti’s titanium receiver. Nonetheless, with its fluted barrel and six-lug Mark V action, the LT weighs just 5 pounds 12 ounces unscoped.

It comes with a fine TriggerTech trigger, Weatherby’s signature Monte Carlo stock, and a sub-MOA guarantee. Mine, in 6.5 Creedmoor, is very accurate, but as with most mountain rifles, groups are best kept to three rounds to prevent the barrel from overheating.

The rifle is tough as hell, and as I’ve noticed with all the guns rolling out of the company’s new Sheridan, Wyoming, facility, the fit and finish and overall quality are excellent.

Read Next: The 10 Most Accurate Factory Hunting Rifles We’ve Ever Tested

These are the most iconic American deer rifles, and like many young hunters, I cut my teeth on one. Not only were lever actions the coolest guns out there in my teenage mind—blame spaghetti Westerns—but a Model 94 in .30/30 could be had for a song.

In those days, there were just a handful of cartridges to choose from in new production guns, and I ended up buying a Marlin 336C in .35 Rem. Like all levers then, it was available in any color I liked as long as it was plain wood.

By the early 2000s, lever actions seemed doomed to obsolescence. But then a growing interest in cowboy-action shooting, the introduction of Hornady’s innovative Leverevolution ammunition, the rise of hog hunting, and the expansion of deer hunting opportunities for straight-walled cartridges changed that.

Lever-gun manufacturers helped the cause too by finally kicking off their shoes and having a little fun with the platform.

Henry is a classic make that has updated its look. The new Lever Action X Model in .45/70 adds a side-loading gate to the receiver in addition to the loading port on the underside of the magazine tube. The synthetic stock has recessed attachment points for sling swivels, and the fore-end incorporates an integral section of Picatinny rail for mounting a light or laser. That feature on a lever gun would have been heretical just 15 years ago, but for shooting in the dark—think hog hunting or home defense—it is a smart move.

The 1895 Modern Hunter is the best expression of gunmakers’ new attitude toward these rifles. When you tally up the features—an oversize, ­paracord-wrapped lever loop, ­Cera­kote-­finished metalwork, a threaded barrel, a painted stock, a long Picatinny rail, a ghost-ring peep sight, a slicked-up action, and an improved ­trigger—it’s clear this isn’t yesteryear’s lever action.

At just under 36 inches overall, the Modern Hunter is quick to bring to the shoulder. It has an extended magazine tube that holds six rounds of .45/70 ammo, a formidable payload that has made it a favorite backup bear gun for North Country guides and sportsmen. As a deer rifle, it is devastatingly effective. I used one last year on a whitetail hunt in Wyoming, sneaking to within 35 yards of a good buck. The 300-grain Barnes TSX FN flattened him in his tracks.

No other category of hunting rifle has grown half as much in recent years as the precision or long-range niche. Many of these guns are the inelegant spawn of heavy-barreled target rifles and traditional hunting bolt actions. Ill-conceived, awkward to handle, and ugly to boot, a lot of them should have been drowned in a river rather than foisted on the gun-buying public. On the other hand, a few gunmakers got it just right. Although this rifle is, at least temporarily, out of production, you can still find a few news ones in shops, and there are also some fine examples on the used market.

George Gardner of GA Precision made his repu­tation building hardworking and well-­balanced rifles with best-in-class accuracy for competition, hunting, and military or law-­enforcement use. His Xtreme Hunter series is a great example of this.

It’s based on GA’s Templar action, the same two-lug system Gardner uses on many of his competition rigs. The 24-inch Bartlein barrel has a No. 3 contour and comes with a ­radial muzzle brake. To save weight, the action is bedded into a ­carbon-fiber Manners stock. The most popular chamberings are 6.5 PRC and 6.5 SAUM S4, but it can be had in numerous other cartridges as well.

To show he isn’t messing around, Gardner guarantees ½-MOA accuracy with the Xtreme Hunter. As the owner of several GA Precision rifles, I can assure you his rifles shoot to that level and better.

When Browning introduced the Hell’s Canyon Speed, it caught the attention of hunters not only for its flashy golden-bronze finish but for its exceptional accuracy.

It’s a big gun, with a 26-inch fluted barrel that’s topped with a muzzle brake. The flush-mounted magazine is one of the best designs out there, and it holds three rounds of 6.5 PRC. The three-lug action runs smoothly from the shoulder; not one of the hundreds of rounds I’ve put through these Brownings has had the slightest problem feeding, extracting, or ejecting.

There’s something very comforting about having this level of reliability combined with accuracy that allows you to put your shots into a softball-size group at 500 yards, even if you never plan to shoot that far at game. And it’s a combination you won’t find at a more affordable price.