9 New and Used Shotguns for Hunting and Home Defense 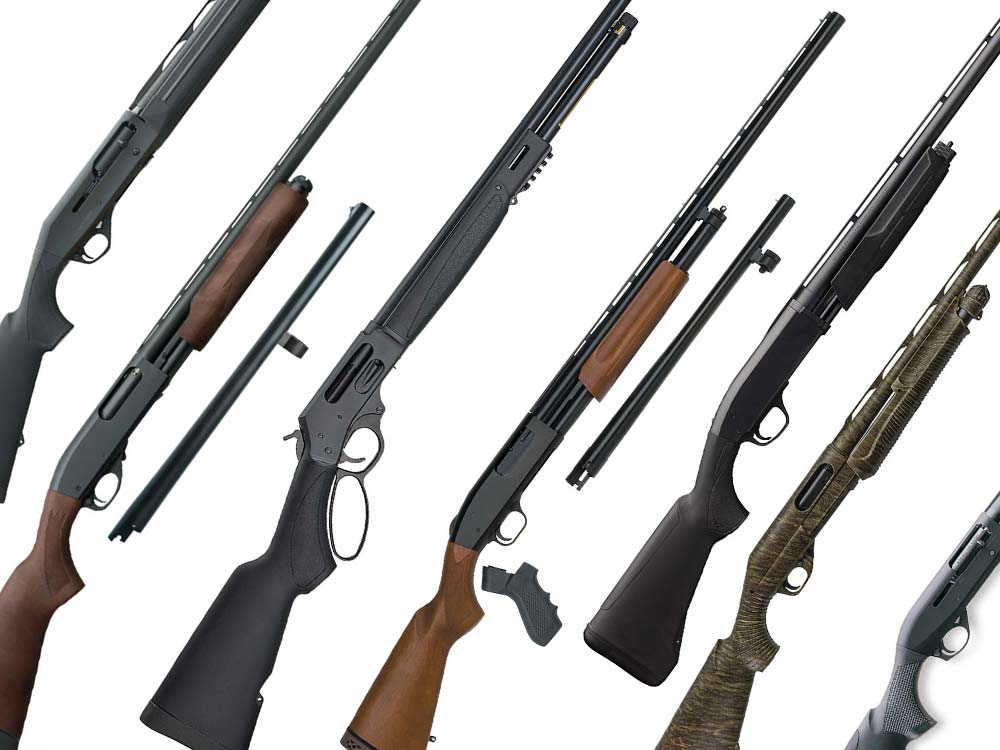 Shotguns are the ideal tool to protect your home. While handguns may be more portable, the multiple points of contact that a shotgun offers makes it easier to shoot, especially for beginners. When paired with the right defensive ammo, they offer an excellent mixture of power, capacity, handling, and portability. While there are innumerable shotguns on the market dedicated to home defense, odds are you probably have hunting shotgun in your safe capable of protecting the homestead. Here’s a look at a number of hunting shotguns that are also great for home defense in their stock trim, or with a few simple modifications.

Also referred to as the Model 12 and “The Perfect Repeater,” this gun was introduced in 1912 and was produced for the next 52 years—so there’s a pretty good chance you’ve got one lying around. Though we may think of it as Granddad’s favorite dove gun, the Model 12 saw service during both World Wars, outfitted with a short barrel, heat shield, and a bayonet. Unlike many of today’s 12 gauges, the tube magazine on the Model 12 holds six 2¾-inch shells, to give soldiers armed with one a fighting chance. It was produced before the advent of screw-in chokes so you can’t change constriction to suit the situation, but many of the nearly two million produced have an improved cylinder which is ideal for home defense. Not in production; used prices vary.

Henry’s .410 lever-action shotguns are a blast for chasing cottontails or squirrels, but their usefulness extends beyond that. You might not think of a lever gun for home defense, but their short length and fast handling makes them a viable option. Henry’s Model X brings the lever gun into the next century, with fiber-optic sights that are easy to find in low-light conditions. It has M-Lok slots and an under-barrel Picatinny rail on the forend so you can add a light or other accessories. There’s also a loading gate on the right side of the receiver for rapid reloads, in addition to Henry’s removable tube magazine. The 19.8-inch smoothbore barrel is threaded for Invector-style chokes to give you full control over your shot pattern.

While a .410 loaded with No. 6 shot is good medicine on rabbits, it leaves a bit to be desired in a home defense situation. Look for purpose-built defensive rounds, such as Winchester’s PDX 1. These shells contain three discs and 12 BBs to make the most of the .410’s ballistic capabilities. henryusa.com; $970

This iconic American pump has been in constant service with the military and police agencies since Remington first introduced it in the 1950s. The 870 represents the best of Big Green. It’s as reliable as the sunrise, and the 11 million produced are a testament to that. You probably already have an 870 in your house that was designed with wing shooting or deer hunting in mind, but it doesn’t take much to make it an ideal home-defense gun. Because the geometry of the 870 has remained the same for a long time, there are countless factory and aftermarket parts available. If you just want to make your gun handier indoors, pick up a short 18½-inch home-defense barrel. To put together the ultimate home defense gun, choose from the myriad tactical parts on the market. You can add forends with built-in lights, sidesaddle shell carriers, and lasers. If you’re buying one new, look at the Express Field & Home combo that comes with 28- and 18½-inch smoothbore barrels. remington.com; $550

At home defense ranges, there isn’t a whole heck of a lot of difference between the 12- and 20-gauge. Stuffed with a typical defensive load, the 20 delivers about 1,300 foot-pounds of energy. That’s only 200 foot-pounds less than the 12, and 1,300 more than anyone would want to deal with. Sure, 12-gauge shells hold more pellets. But you can get around that by using smaller shot like No. 4 buck, which provides a payload of 24 pellets. Each of these is about the size of a .22 bullet, and they have twice as much energy as most handgun cartridges. Another advantage of the 20 is reduced recoil, which is further mitigated by using a semiautomatic like the M2. Available with barrels as short as 24 inches, the 20-gauge M2 uses the same Inertia Driven system of the 12-gauge to reliably cycle rounds. Even if you’re not recoil adverse, think about the others in your house that may use it. Or, just use that as an excuse to buy a new gun. benelliusa.com; $1,349

O.F. Mossberg & Sons has been making affordable firearms since its founding in 1919. One of their most recognizable guns is the Model 500, a reasonably priced pump-action shotgun that introduced many shooters to a 12-gauge. And because it’s been used by police departments for so long, the aftermarket is flooded with accessories to make it more useful as a defensive gun. Mossberg often sells it with a pair of barrels, such as a rifled one for slugs and a longer smoothbore for wing shooting. But for home defense, none makes as much sense as the Field and Security Combo. This kit includes a 28-inch vent rib barrel for waterfowl and upland game, as well as an 18.5-inch home-defense barrel. The combo also includes a pistol grip to shorten the shotgun and make it easier to maneuver in a house. But I recommend keeping the buttstock on. It’ll be a lot easier to handle the 12-gauge kick with it. mossberg.com; $477

When Benelli introduced the Nova in the 1990s, it was something of a novelty. At the time, synthetic stocks were more or less only available as aftermarket options, so its steel-reinforced polymer one-piece receiver and buttstock really stood out on gun store shelves. The corrosion-resistant nature of the stock quickly drew the attention of waterfowlers, making the Nova a mainstay in the duck blind. But the Italian-made pump has a handy feature for home defense: A magazine disconnect button in the forend that allows you to empty the chamber without drawing another shell up from the tube. So once you’re satisfied that the noise you heard wasn’t a burglar, you can make the gun safe in an instant. As a turkey/home-defense gun, mine now wears a reflex sight but the factory brass mid-bead and fiber optic front sight work good enough for both roles. An updated version of the Nova is also available, the Super Nova, that has rubber chevrons in the stock to soak up recoil. benelliusa.com; starting at $449

Read Next: The 30 Best AR-Style Rifles for Hunting and Personal Defense

The Winchester SXP is considered by many to be the world’s fastest pump shotgun, incorporating an innovative spring-loaded bolt head that gives shooters a head start when it’s time to shuck in the next shell. When you pull the trigger, spring tension takes over and helps open the bolt, starting the pumping stroke in the process. You can get this slick action and a pair of barrels with the SXP Field/Camp Combo. This 12-gauge all-in-one pump includes a low-vis black anodized aluminum receiver capable of handling 3-inch shells a synthetic stock and an 18-inch and 28-inch barrel. Winchester’s Inflex technology recoil pad directs recoil downward, taking some of the sting out of heavy buckshot or goose loads. Three Invector-Plus chokes are included in full, modified, and improved cylinder to handle everything from light bird loads to buckshot. winchesterguns.com; $479

Some of the features that make a shotgun excellent for turkey and predator hunting also make it a good choice for home defense. The Stoeger M3500 Predator/Turkey Shotgun owes its compact dimensions to a 24-inch barrel. It was designed to move efficiently while tracking a coyote or a wary tom, and the reduced length and pistol grip are equally well suited to defending your castle. Combined with the buttstock, the pistol grip lets you easily hold the M3500 one-handed, allowing you to open doors and maneuver through your house unimpeded. This autoloader uses Benelli’s patented Inertia Drive system to reliably cycle everything from 2¾- to 3½-inch loads, at a much lower price point than Benelli. There is a recoil reducer in the buttstock, taking more of the sting out of stout recoiling buckshot loads. stoegerindustries.com, $929

The Browning Pump Shotgun, or BPS for short, is a truly ambidextrous design. Unlike most shotguns that eject shells out the side, the BPS directs spent hulls out the bottom of the receiver. The manual safety is located on the top tang, so it’s in the right spot for right or left-handed shooters—meaning everyone in the house can use it with ease. For 2020, Browning introduced a new composite model of the BPS. This innovative synthetic version has a buttstock design that allows a gunsmith to cut it down for a custom fit. Combining the shortened length of pull with the reduced recoil of a 20 gauge makes the BPS a great choice for smaller statured shooters. Remember, the 20 gauge produces about twice the power of a .44 Magnum, which I think we can all agree is a powerful round. browning.com; $679