Best New Hunting and Trail Handguns from the 2020 SHOT Show 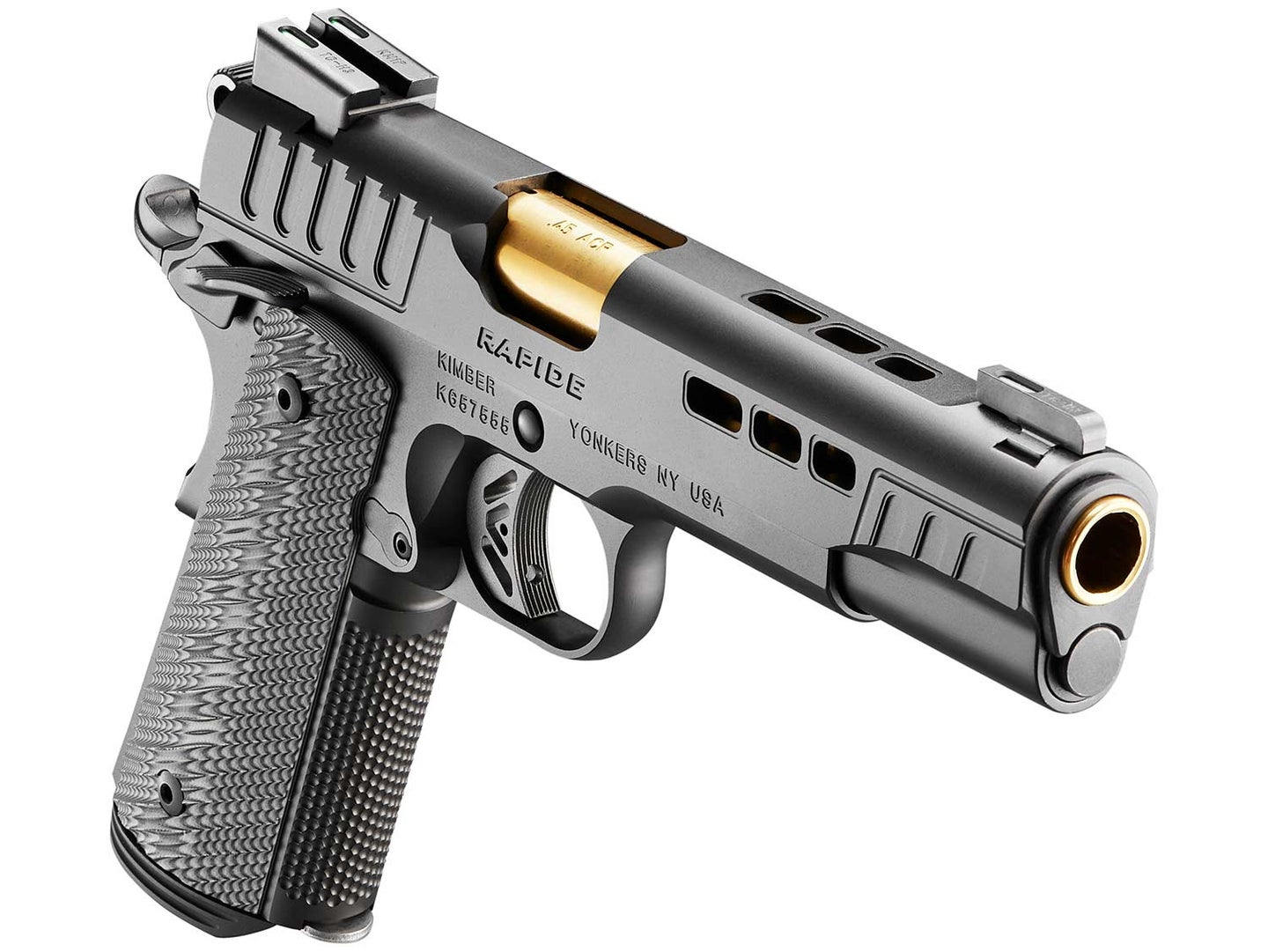 You can find our picks for the best new handguns, pistols, and revolvers for 2021 here. And be sure to follow our full coverage of the best new hunting and shooting gear of 2021, including rifles, shotguns, ammunition, compound bows, and crossbows.

There are a bunch of good reasons to carry a handgun in the great outdoors. For one, hunting with a pistol is fun. Two, blasting mud clods is a good way to pass the time when the fish aren’t biting. Three, a coyote might cross your path on your way to check trail cameras.

There are no set criteria that I know of for a woods and trail gun. The striker-fired, polymer 9mm you use for concealed carry and home defense works just fine outdoors, too. But some types of guns—rimfires and revolvers especially—seem to hit their best stride. Here’s a look at a few new handguns from this year’s SHOT Show that I particularly liked.

I’m inclined to never disagree with David Petzal. But if I shared his sentiments on the .22 WMR cartridge, we’d both be wrong. Not only do I not believe the round is overrated, I actually think it’s underrated. Is it as accurate on average as a .22 LR? No. But on the topic of effective mid-size critter dispatchment, they’re not even close. Spend time with both on a trapline, and you’ll see a stark difference between the two calibers. The magnum rimfire has killing power bordering on mysterious.

Knowing that, and also knowing that I’m a sucker for heavy, stainless-steel double-action revolvers, makes it easy to understand why I made several trips back to the Smith & Wesson booth to ogle the new 648—a K-frame 8-shooter in .22 WMR with a 6-inch barrel and fully adjustable sights. This is a big gun (46 ounces) designed for a lifetime of use. But even if your rimfire handgun needs are more for field work than target work, I don’t think you can go wrong with it. $752; smith-wesson.com

Double-action revolver aficionados have been eagerly anticipating the new Python since Colt stepped back into the revolver market a few years ago. Many consider the original Python to be the smoothest-shooting double-action ever made, and used ones have always commanded a premium. But their prices have become downright stupid in the past decade, thanks in part to Rick Grimes, the lawman turned zombie fighter in the hit show The Walking Dead. Rick used the big wheel gun to battle the undead and mean-ass southerners alike—all while faking a pretty good southern accent of his own.

I put a couple cylinders of .38 Special through this one, and I can unequivocally say it’s the smoothest revolver I’ve ever fired. It’d make a fine gun for hunting or defense, but were I to buy it, I think I’d have to set it somewhere where I could just look at it and think of how pretty it is. This one strikes me as an heirloom. $1,500 (4-inch); colt.com

For a trail gun, a full-size pistol that sports adjustable sights, weighs just 2 pounds, and holds 20 chances worth of flat-shooting, high-velocity ammunition gets my attention. Ruger’s new 57 might remind you of the FN Five-seveN, which has been around long enough (since the ’90s) to become a modern classic. Both are high-capacity, polymer autoloaders built around the 5.7x28mm round, which was developed for military use but is a standout in the woods, too. From a pistol barrel, the 5.7 has ballistics similar to that of a .22 WMR rifle (like a 40-grain V-Max at 2,000 fps.+), and the Ruger comes drilled and tapped for a reflex-style optic of your choice. If you want to pack a pistol for coyotes, there may not be a finer option.

I ran a magazine through the 57 at the range, where it cycled flawlessly and was easy to hit with. Maybe best of all, the Ruger retails for just a little more than half of its primary competitor. $800; ruger.com

The newest model in Glock’s Gen5 series is a compact frame .22 LR called the G44. As a training tool, the pistol is a near match for the Glock 19 (though lighter), which is one of the most popular 9mm handguns in the world. But it’d do fine as a dedicated field gun for trophy bullfrog hunters, possum trappers, and plinkers, too.

Aside from the caliber, hybrid steel/polymer slide, and simple blow-back action, this gun is just like any other Glock. It has adjustable rear sights and the Glock Marksman barrel, interchangeable backstraps for a perfect hand fit, plus the signature Safe Action trigger system. I shot it on the range, and found it as easy to hit with as anything else I tried. $389; Glockstore.com

Some say tiny .380s like the Ruger LCP have made the defensive .22 pocket pistols of yesteryear obsolete. Ballistically speaking, that’s true because when it comes to fending off trouble, a .22 ain’t a .380.

But sometimes reality gets in the way of ballistics charts. And the reality is those tiny .380s are so uncomfortable to shoot that a lot of people buy them and then never practice with them. And so, what was old is new again. Ruger’s Lite Rack LCP II now comes chambered in .22 LR, with a 10-round magazine capacity. The light recoil spring makes the slide easy to manipulate, and the Secure Action fire control system provides a nice trigger pull. The gun has a manual safety, so you can carry it in a pocket with peace of mind. Many older .22 pocket autos had sketchy reliability, and I wouldn’t expect this one to be perfect, either (a product of rimfire ammo more than the gun)—but I ran a few magazines through it at the range without a problem. $349; ruger.com

Read Next: Best New Rimfire Rifles and Handguns of the 2020 SHOT Show

I don’t think anyone makes a finer looking pistol than Kimber, but the new Rapide Black Ice is a standout, even for them. The competition-ready 1911 has cuts in the slide around the barrel for faster lock time, a Diamond-Like Coating (that’s what it’s called, folks) for durability, TruGlo TFX Pro Day/Night sights, and a two-tone silver and gray finish on the slide and frame, paired with distinctive black G10 grips. It also has a flush-fitting extended mag well, a match-grade trigger, and Commander-style hammer. I’d almost say it’s too pretty to take out hunting, but if you get one in 10mm (it’s available in 9mm and .45 ACP, too), that’s exactly what you ought to do with it. $1,510 (10mm); kimberamerica.com

Kimber’s distinctive K6S .357 Magnum has been a standout for anyone shopping for a carry revolver. It boasts the smallest 6-round cylinder on the market. The gun was initially offered as a double-action-only snubbie, but that iteration has been followed by a few others, including a 3-inch gun with an exposed hammer. Probably a few other revolver nerds were like me and hoped for a version with a longer barrel yet and good adjustable sights, because despite its compact frame, the K6S has enough heft to be a pretty good hunting gun (say what you want about the .357 Magnum; I’ve used it on a number of whitetails, and it works just fine).

This year, a K6S 4-inch Target model with adjustable sights is available. I like revolvers partly for the traditional style, and the K6S looks thoroughly modern—but it’s classy nonetheless. With a crisp single-action trigger of 3.25-4.25 pounds (reportedly), I’d guess it’ll be a shooter, too. $989; kimberamerica.com