Thinking of toting a double-gun for ducks? These classics are worth taking a look at 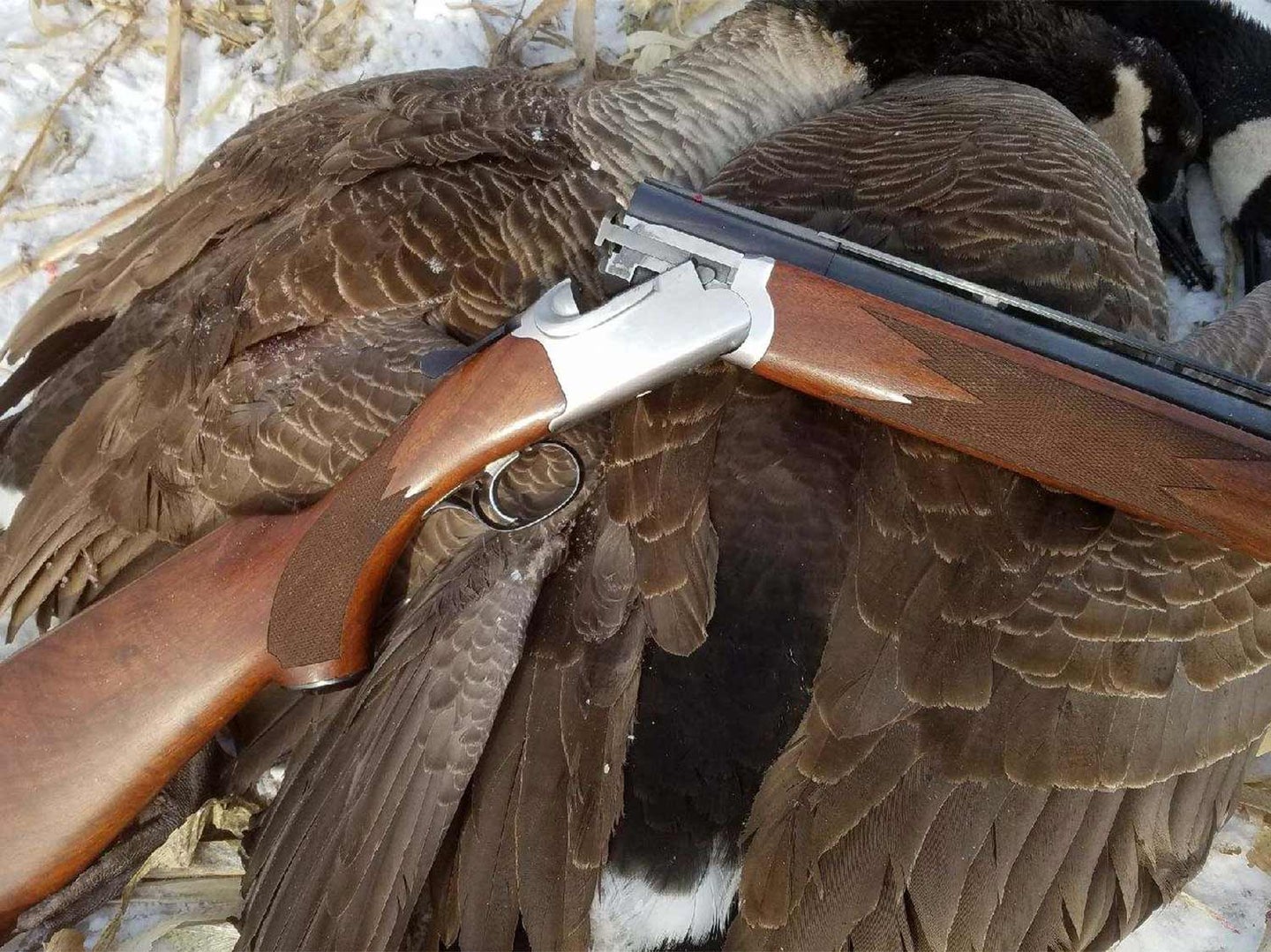 Break-action guns were once the only waterfowl guns a sportsman would consider. When pumps and semiautos first appeared in the late 19th and early 20th centuries, they were seen as the guns of market hunters and game hogs. “I would rather catch trout with a net [than shoot a pump],” wrote one gentleman sportsman of the day. The practicality of repeaters ultimately won hunters over. Now, a hundred-plus years later, break-action guns lag far behind more practical pumps and semiautos in popularity in the blind.

Still, doubles and O/Us have their advantages. They’re the most reliable guns of all, with enclosed actions that don’t collect mud, ice, and debris. They’ll shoot any misshapen factory shell or reload you can stuff into the chambers, and they offer two chokes, giving you an open pattern for birds over decoys and a tighter second shot as they’re flaring out of the hole. And, a gun with a barrel selector or double triggers lets you choose the tight barrel for that high overhead bird you see coming from a mile away.

Here are nine break-action waterfowl guns, past and present, eight of which you could take to the blind today, one of which you most definitely could not.

Duck guns don’t come any more famous than Bo-Whoop, the Super Fox shotgun that belonged to outdoor writer and renowned wingshot Nash Buckingham. I have told the story of Bo-Whoop’s mysterious disappearance and rediscovery here before, and colleague Will Brantley even had a chance to hunt with the gun, which now resides at DU headquarters in Memphis. But, Bo Whoop is not the only Super Fox, just the most famous one. If you really want a Super Fox of your own and don’t mind paying a lot for it, you can still find the ultimate duck double in 12 gauge, or you might even come upon one of the very scarce 20s.

The result was a big gun weighing nine pounds with 32-inch barrels. Buckingham ordered his gun with a straight grip, double triggers, extra engraving, and no safety. The distinctive two-part boom of its magnum report at Beaverdam Lake in Mississippi earned it the name “Bo Whoop.”

Ithaca introduced the NID (New Ithaca Double) to replace the outdated Flues model designed in pre-smokeless powder days. The NID was thoroughly modern, boasting a lightning-fast lock time, coil springs, and an action strong enough that it was chosen and the basis for the first 10 gauge magnum.

Just as Federal and Mossberg would later collude on the 3½-inch 12-gauge—and a gun (the 835 pump) to shoot it—Winchester developed the 3½-inch 10-gauge cartridge in 1932 while Ithaca made the first 10-gauge magnums to shoot them. The 10 gauge NIDs were massive, 10- and 11-pound guns with strengthened actions. Thirty-two-inch barrels were standard, although you could go even bigger and order 34-inch barrels as an option. Almost 900 were made from 1932 to 1942, and they come up from sale more often than you might think—and for a semi-affordable price for an unusual classic double, topping out around $4,800. Ithaca made 2⅞-inch 10s also. You can be sure a gun is a magnum if it has a serial number over 500,000.

John Browning’s last invention, the Superposed O/U, was a great gun. It was also a heavy gun. A 12-gauge Superposed is a burden in the uplands, but its eight-pound weight helps it swing smoothly and absorb recoil in the blind. The first mass-produced O/U, it became an aspirational gun for a couple of generations of American shotgunners, many of whom hunted ducks with it. The Superposed counts Ernest Hemingway as one of its most famous waterfowling owners. He won one of the earliest guns in a live pigeon shoot in France in the 30s, then hunted both upland birds and ducks with it over the next many years. It survived a dunking into ten feet of water when Hemingway and his son Jack flipped a canoe while duck hunting,

Most Superposed guns have 2¾-inch chambers, but there were some 3-inch magnum Superposeds made, and one of the guns near the top of my “guns that got away” list was a 3-inch, 30-inch barreled, Full and Full-choked Superposed I somehow talked myself out of. There is no reason you shouldn’t find a Superposed of your own. The good news is, there are plenty of 12 gauge Superposeds around, and they don’t command the premium the 20s do, so if you want one, and can afford to baby its Belgian steel barrels with bismuth, they’re out there.

If you would prefer something steel-friendly, the Superposed’s successor, the Citori, has been around since the 1970s and is still going strong today. It’s tough Japanese steel barrels can survive all the steel you care to put through them.

Ruger’s Red Label was a heavy, well-engineered, often indifferently finished, O/U made in New Hampshire from 1977 until 2011. Solid and reliable, it makes a good waterfowl gun. Some people are put off by the way Red Labels flop open and assume they’re loose. The easy-opening is a feature, not a glitch: they’re designed that way. Don’t worry. A Red Label will outlast you.

I bought mine as a memento of its owner, a deceased member of my gun club. It sits on the bench waiting for the bitter cold days when semiautos freeze and my numb thumbs have trouble pushing shells into a magazine tube. To be honest, I have hunted waterfowl with it only once, on exactly the kind of day I bought it for: zero degrees, 30 mph winds, when none of my friends would leave their warm houses to hunt with me. I shot my three geese in 25 minutes and two were banded. The gun wasn’t for sale before that, but now it’s really not for sale.

Mine is the standard walnut and stainless receiver/blued barrels finish, but from 1999 to 2006, Ruger did offer an all-weather stainless model. Equipped with synthetic stock and forend, the black and silver Red Label was an exceptionally ugly gun, but it was also about as bulletproof a waterfowling O/U as you could ask for.

Browning intended the modern, very low-profile Cynergy as a replacement for the Citori, but wound up keeping both guns in the lineup, eventually positioning the Cynergy slightly below the Citori in price. Don’t let that decision lead you to underestimate the gun. The Cynergy has the strongest action you could hope for and mechanical triggers, too, making it a great choice for a diet of duck loads. I kept one in the backup role currently filled by the Red Label until my younger son declared it “his” and took it from me.

Browning has made some synthetic-stocked, waterfowling versions of the Cynergy in the past, and currently offers a limited run of 3½-inch Wicked Wing Cynergies with camo stocks and bronze Cerakoted metal. If you like the camo and Cerakote look and want an O/U, it’s hard to imagine a better choice.

CZ introduced a new line of “All Terrain” models this year, comprised of several break actions including the Redhead, Drake, Lightweight O/Us, and the Bobwhite double in both 12 and 20 gauge. The guns feature matte-finished walnut stocks and olive-drab Cerakoted metal and swivel studs. Tiny rare earth magnets in the ejectors or extractors are just strong enough to keep a loaded shell from falling out, which makes loading and unloading an O/U in a duck blind much more convenient and puts an end to the plop sound of shells hitting the water when you’re trying to load in a hurry.

The Redhead is the top of the All-Terrain line. It comes in 12 and 20 gauge and features ejectors, extended chokes, and a sporting clays-style pad with a hard insert at the top to keep it from grabbing your bulky waterfowl parka. I have the 30-inch 20-gauge, which is a hefty 20 gauge at 7¼ well-balanced pounds, and some extra weight is a good thing when you’re shooting ducks and geese. It’s a lot of gun for $1123.

The strongest, stoutest, and most modern of American double guns, the Model 21 was available in a variety of production and custom models from 1931 to the 80s and is available again today as a custom order from Connecticut Shotgun Manufacturing Company. Winchester publicized the gun’s strength with a proof load torture test in which a number of the world’s finest doubles were fired with proof loads until they failed. The Model 21 was the only gun to survive the test, still shooting long after the others failed, and in all digesting 2000 proof loads without a problem.

New York Yankees great Joe DiMaggio hunted ducks with a Model 21 presented to him during his famous hitting streak. When it sold at auction a few years ago, the catalog description mentioned the stock was partly damaged by a fire in a duck blind. DiMaggio’s gun has 2¾-inch chambers, but Winchester also offered a Model 21 Duck Gun with 3-inch chambers and a choice of 30 or 32-inch barrels. I would already have one if it wasn’t for the part about them selling for $9,000.

TriStar guns, like all Turkish guns in general, keep on getting better and keep on earning the trust of more American hunters and shooters. The Hunter Mag II is an O/U dressed up, well, dressed down, I guess, for the duck blind with a camo finish, 3½-inch chamber, sling swivel studs, and a choice of 28 or 30-inch barrels. It has extractors and a price tag so low ($750) that you can abuse it and not feel bad. For only $10 more, you can have it in camo and Cerakote. TriStar stands behind its products with a 5-year warranty.

Colt used to sell shotguns, including one unique double custom made for Grover Cleveland shortly before he won the first of his two non-consecutive terms as president. Criticized by the press for hunting and fishing too much in office, Cleveland was completely unapologetic. “As far as my attachment to outdoor sports may be considered a fault, I am…utterly incorrigible and shameless,” he wrote in his book “Fishing and Shooting Sketches,” published in 1906 near the end of his life.

An accomplished wingshot and enthusiastic waterfowler, Cleveland ordered a custom double from Colt in 1883 while he was serving as governor of New York. The Damascus-barreled gun has Cleveland’s name inlaid in gold on the trigger guard. Today it’s on display at the NRA Sporting Arms Museum at Bass Pro’s Missouri headquarters, but even if they let you borrow it, you couldn’t hunt with ducks and geese with it legally. The 10 gauge has been the biggest legal gauge in North America since 1918, and Cleveland’s gun is the only 8-gauge Colt ever made.