10 Classic Guns That Got Away 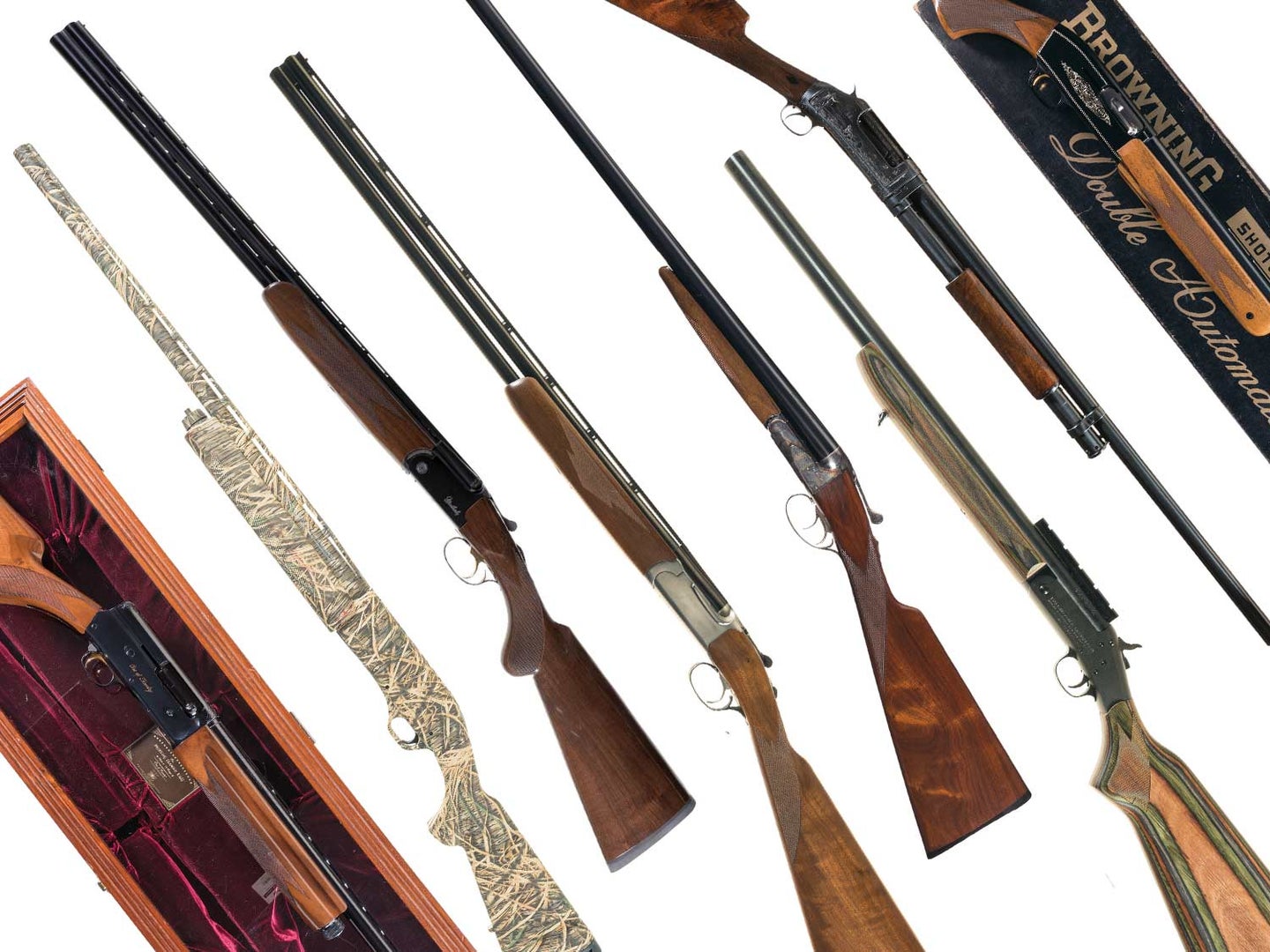 Some people never sell a gun. One of my writer colleagues has been buying a gun a week since the late 1950s, and he owns three houses full of guns. Another swears that on the occasion of his heart attack, his wife screamed at him, “Don’t you dare die and leave me with all these guns.”

At the other end of the spectrum, there are people like my friend who has owned hundreds of classic doubles—but never more than about six at a time. Every time we talk, he has found his “last” gun, but that last gun always changes.

I have a few more than six, although not even a roomful, much less a houseful. But I’ve owned a lot. Some I sold when I was young to pay for the heat and electricity to which my wife believes she is entitled. Others I sold or traded in for guns I wanted more, sometimes wisely, sometimes not. I have gone through enough guns that, upon finding a gun that caught my eye in the used rack at a gun store, I’ve thought about buying it, then looked at it closely and realized, Wait, I used to own this one.

Here are 10 guns I should have hung onto, especially as they aren’t made anymore.

For many years, the Ruger Red Label, introduced in 1977, was the only o/u made in the United States. Being homegrown really appeared to the gun’s cult of fans, and Red Labels always provoked strong reactions, pro and con. I run mildly hot to freezing cold on them, which is why I’m on my fourth. I don’t miss the 20 gauge, nor the first 12 gauge, both of which were overweight and poorly finished, but the 28 I owned for a few years was a joy. Built on a scaled 28-gauge frame, it was about as light as a gun can be and still be easy to shoot. The 28-inch barrels gave it just the right amount of weight forward balance. Like so many Red Labels, it suffered from depressingly bad wood-to-metal fit, and I sold it in a fit of pique, which, in hindsight, was dumb.

The Sterlingworth was A.H. Fox’s entry-level gun, not quite the 870 Express version of the Fox, but definitely a bare-bones, utilitarian double introduced in 1910, made in Philadelphia until 1930, and in Utica, New York, by Savage until the ’40s. I found a 12 gauge that was nice and tight but in need of refurbishing. I bought the gun and sent it to Briley for a makeover, and it came back looking great. No gun in my cabinet closed with quite the pleasing thunk that this Fox made when you shut the action. But it had the extreme drop in the stock typical of so many American doubles, and without ever giving it a fair shake, I decided I wouldn’t be able to shoot it, so I traded it for a Browning Cynergy, which my younger son then took from me.

A few years after I got rid of the Fox, I had occasion to shoot a 16-gauge Sterlingworth with similar stock dimensions on a preserve hunt for the Gun Nuts TV show. Once I found out I couldn’t miss with it, I realized what an error I made getting rid of my gun.

Invented by John Browning’s son Val in the ’50s, the Browning Double Automatic was another one of those answers to a question no one was asking: What if you could make a two-shot semiauto? If you think about it, such a gun combines the drawback of a break action (only two shots) with the drawback of a pump or semiauto (one choke). And while that’s true, it’s equally true that the Double Automatic was a very good bird gun, coming in a heavy steel frame version, a Twelvette model, which I owned, that weighed a little over 6 ½ pounds, and a Twentyweight that was even lighter still. You thumbed a shell into a loading port on the left side of the receiver and it whisked it into the chamber, then you stuck another shell into the port, which also served as a one-shot magazine.

The Double Automatics were offered in, I think, four different receiver colors: black, silver, green, and reddish-brown and were made until the early ’70s. As happens with me, I turned on the gun. I loved it for two or three seasons, then got mad at it when I learned it didn’t like to cycle below 10 degrees no matter how much or how little lube I applied.

I sold it to someone who said, “If it’s 10 degrees out, I’m not going hunting.” I assume he’s still happy with it.

The SKB guns made in Japan’s Sakaba factory from the from the 1960s through the 2000s, were imported by Ithaca in the ’60s and ’70s, and later Weatherby and SKB until the factory in switched over from guns to making auto parts or golf clubs or whatever it was. They were solidly made doubles and over/unders, and a lot of low-tech, high-skill labor went into each one.

They were a deal, too. You could pick them up used for a few hundred dollars and for a time I owned an Ithaca/SKB 500 in 12 gauge with 26-inch barrels and IC/M chokes. The gun had very light, nearly-grainless wood, and engraving that was definitely an acquired taste (one side of the receiver featured a pheasant flying over a snow-capped mountain). But it worked, and I bought it just at the time my first shorthair hit his prime; CRP was new and there were pheasants everywhere. I shot a bunch of birds with it, then let it go.

Because I am dim enough that I need to learn some lessons twice, everything that’s true of the SKB 500 applies to my Weatherby Orion. Nothing more than a 500 dressed up in Weatherby’s signature Claro walnut, the Orion was the entry-level Weatherby o/u and a handsome gun. It was the gun I shot most over my English setter, Ike, and I don’t even remember what I traded it for, but I hope it was something really good, because this is the SKB shotgun I wish I still owned.

A stroke of pure genius, John Browning’s Auto 5 was the first semiautomatic shotgun. It was also my first shotgun, and you’re never supposed to sell your first gun. I knew that even as I was parting with my Auto 5, but the gun needed bluing, refinishing, a new barrel to replaced the vented Polychoke, and a few other repairs that I couldn’t afford at the time. A friend had all that work done, and the gun was beautiful when he finished with it—after which he sold it someone else, so it’s gone.

It was an Auto 5 Light 12. Although “Light” is a relative term, I carried it and shot it a lot, and the odd pogo-stick recoil of the gun’s long-recoil action never bothered me, because as far as I knew, all guns felt like that. Mine was Belgian made, and was my dad’s second Auto 5, which he bought to replace the one he dropped over the side of a boat. I’d like mine back, but who knows where it is.

Like the Auto 5, the Model 97 was the work of John Browning. Introduced in the early days of smokeless powder, the 97 was made from 1897 until 1957, which is an incredible run for a pump gun with an exposed hammer, and testament to the overall excellence of its design. Also, despite its ungainly looks, the 97 was a low-profile, sure-pointing gun, because John Browning was a competitive shooter and hunter as well as being a gun designer. I found a cheap one with the barrel scratched on the outside and pitted on the inside, but there was nothing wrong with the action. I loved the way parts stuck out of the receiver when I worked the slide. It had the feel of a 19th century harvesting machine, which it was, with a little Wild West flavor thrown in. I kept it long enough to add two turkeys to its life list, then passed it on to its next owner.

Back in the ’90s, Winchester put the simplified insides of the Browning Gold gas semiauto into a retro package that bore a resemblance to the great Super X1 and called it the Super X2. There was much to like about the X2. It was reliable, very soft shooting, had the aforementioned retro look, and it weighed nearly 8 pounds, which in these days of featherlight duck guns, is a rarity. The weight, I thought, made it an easy gun to shoot well. For what it’s worth, I probably made the single best field shot of my life with my first X2, on a rooster pheasant crossing at 40 yards or so in a screaming North Dakota tailwind. I liked the way the gun looked, too.

I don’t remember why I got rid of the first X2, but I soon had another, which I also didn’t keep. Then I got a third, which I would still have except that a reader recognized the gun’s picture in a magazine as one he used to own, and asked if I would sell it back to him. I did, and am once again X2-less.

The X2’s successors, the X3 and X4 are fine guns, but Winchester has trimmed weight and changed the styling to suit current tastes, meaning that everybody but me likes them better than the X2.

The H&R single-shot slug gun wins a place in the pantheon of cheap guns. Inexpensive (and I mean, like, 200 bucks) and laser-accurate, with a surprisingly clean trigger, the slug version of the single shot Handi-Rifle did nothing but shoot straight. The barrel’s weight made it pleasant to shoot with 20-gauge slugs, yet overall weight wasn’t bad for carrying slung. I got one for my younger son to shoot during his last two youth deer seasons, and both the deer he shot went about 20 yards and piled up. John graduated to muzzleloaders, and I decided I could always get another if I need one, so I let this one walk, upon which Remington acquired H&R and discontinued the slug guns.

The Mossberg 835 Grand Slam was a 20-inch barreled version of the 3 ½-inch chambered Ulti-Mag pump intended for turkey hunting. Mine was slick, reliable, left-hander friendly with a top safety, fairly light, and it patterned well thanks to their overbored barrel. What’s not to like?

My Grand Slam arrived just as my turkey-hunting fortunes changed after a decade of futility. The short barrel made it handy, and the drilled and tapped receiver accommodated a scope (Nikon Turkey Pro, the best turkey scope ever and, therefore, of course, also no longer made). All of a sudden I started killing turkeys again. Some of that had nothing to do with the gun, but some did. After four or five seasons I had to sell it to pay for an expensive emergency dog surgery for Jed, but the story has a happy ending: The dog is still hunting, and just last spring I found an 835 turkey gun for next to nothing, then I found a short Grand Slam barrel for it. The gun will be scoped and re-dipped so all the parts match—and ready to go next spring.