The 10 Best Trap Guns Ever 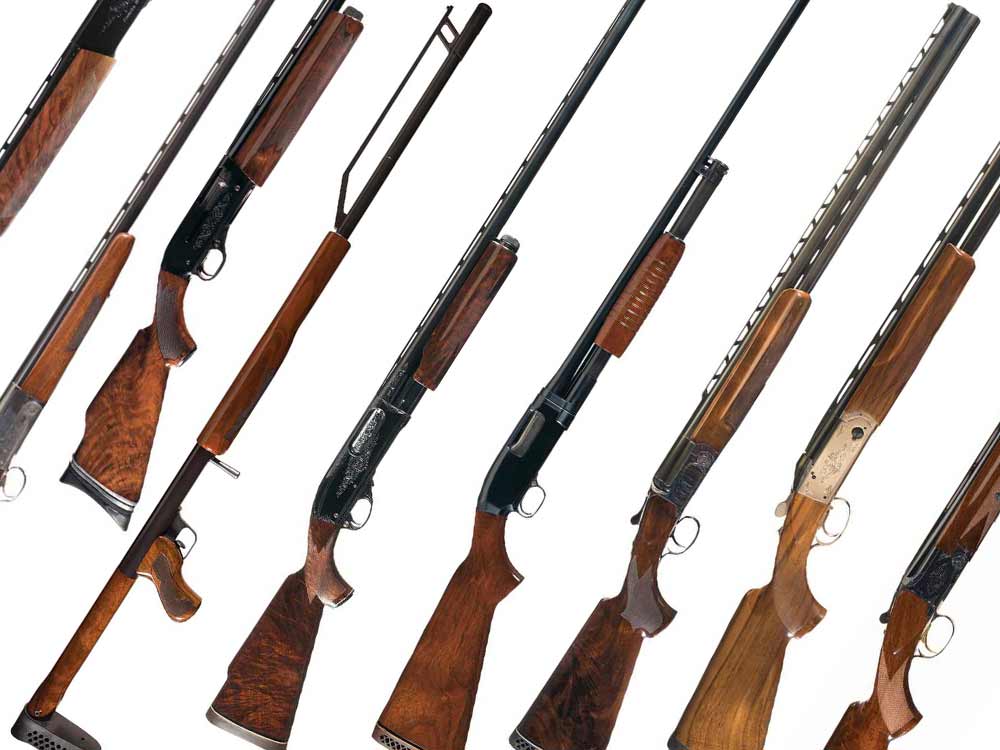 Trap guns are as specialized as shotguns get. There’s not much you can do with them other than break trap targets, but they are supremely adapted for that role. Long and heavy to point surely and soak up recoil, trap guns must be able to endure hundreds of rounds in a day, and tens of thousands in a season. They have to fit the shooter, usually in such a way that they shoot high, and pattern tightly to turn targets to dust over and over. The ATA (Amateur Trapshooting Association) games shot in the United States differ from other disciplines in that both singles and handicap are one-shot affairs, making the single-barrel trap gun a uniquely American arm, although doubles requires a two-shot gun, or a single barrel-O/U combo.

The 10 guns listed here—not in any particular order—are the greatest trap guns ever made. Greatness sometimes comes with a high price tag, sometimes it doesn’t. These guns range in price from hundreds to thousands of dollars, yet all of these are proven in competition, and many of them are still winning today.

Immediately identifiable by its sliding-latch action and separated barrels, the K-80 has proven an extremely durable performer and one of the most popular and winningest guns among high-end buyers. Essentially a custom gun, you can get your K-80 made any way you want, and as plain or as lavishly decorated as you like, although even the base model sets you back about $12,000.

Made in Ulm, Germany, the Kreighoff has American roots. Remington introduced the Model 32 O/U in 1931, specifically gearing it toward the target market. High production costs and changing tastes among American shooters led Remington to cease Model 32 production in 1947. There’s nothing Germans appreciate more than good engineering, and in 1956, Krieghoff bought the European manufacturing rights to the gun, and began making it first as the K-32, then after a redesign in the ’80s, as the K-80.

Young gunmaker Daniele Perazzi worked with Italian trapshooting champion Ennio Mattarelli on a new gun for Matarelli to shoot in the 1964 Olympics. It was trim and elegant, a sidelock gun with an action borrowed from the very low profile British Boss O/U. Matterelli won gold, making a name for Perazzi guns as winners that persists to this day. The two men then collaborated on a new gun, the MX8, for the 1968 Mexico City games. While Mattarrelli did not win that year (he won a world championship the following year), the MX8 has been a success ever since and remains in the Perazzi catalog today alongside newer models.

The MX8 was an innovative, modular gun, with easily interchangeable stocks, a high, stepped rib, a drop-out trigger and a screw-in choke in the bottom barrel. And, being an Italian gun, it had sleek and racy looks and feel. Like the Krieghoff, it’s a custom gun, and you can order yours any way you’d like it for about the same price and shooters in search of an extra target gladly pay for it.

Al Ljutic, a boxer, rifle maker, Team USA rifleman, and gifted engineer, took up trapshooting in 1955, when someone invited him to the gun club. Because he didn’t have a trap gun, he built one for himself—in a day. And, Al didn’t make just any gun, he made the precursor of his Space Gun. Looking more like a 12 gauge pogo stick than a shotgun, the Space Gun had a bottom loading port and a bolt handle that stuck straight down. It was nearly recoiless, thanks to a massive firing pin and spring that moved forward with enough force to counteract recoil. What little kick the gun did generate was directed back into the shooter’s shoulder due to the unique lines of the gun, whose barrel was directly in line with the stock.

Only about 200 Space Guns were made, but Ljutic’s more conventional Mono Trap is still built today in Yakima, Washington, and has a following among serious shooters. To be fair, the Mono Trap probably should have made this list instead of the Space Gun. The Silver Seitz or the Kolar Max Trap—two other high-end single shots from small American makers—could have taken this spot too, but then I couldn’t have told you about one of the great oddball shotguns ever made.

When it came time to introduce a successor to the John Browning-designed Model 97 pump, Winchester turned to their young star designer, Thomas Crossley Johnson, and told him to make a gun that did away with the 97’s exposed hammer. Johnson came up with a gloriously slick pump gun, the Model 1912, soon shortened to Model 12. With its sleek lines and a hammer tucked away inside the receiver where it couldn’t gouge your thumb, the Model 12 was an almost instant success. Skeet and trap shooters loved the way it pointed and swung, the action was smooth enough that it seemed to pump itself on doubles and it was durable and reliable. For decades, the Model 12 was a fixture on trap fields, and plenty of them are still on the line today.

In 1964, the Model 12 was discontinued in the face of rising production costs and competition from guns like the Remington 870, which was much cheaper to make. The so-called “Y” series Model 12s, made of left-over parts, were introduced in 1972 and built until 1980. Most Y guns were trap models. Purists look down on the Y models, but there’s nothing wrong with the way they break targets.

Introduced in 1950, the 870 was made to be built cheaply. Remington’s “family” approach meant that a few different rifle and shotgun models shared common parts, and many of those parts were stamped, not machined. Despite those cost-cutting measures, the 870 was a terrific shotgun: sleek, trim, smooth-cycling, and bulletproof. The gun could do anything a shotgun needed to do, including smashing trap targets. By dint of sheer numbers, 870s have undoubtedly broken more targets than any other trap gun.

The one rap on the 870 is that some shooters feel it recoils to hard. Remington addressed the problem, as I mentioned in this story, with the 870 Competition, a single-shot pump with a gas system that soaked up recoil just like an 1100.

Browning’s single-barrel trap gun, the BT-99 was the first shotgun produced with its partnership with Japanese maker Miroku. In 1968, “Made in Japan” still meant “cheap,” but the foolproof BT-99 won shooters over. Affordably priced, it was a gun you could shoot for an entire trapshooting career, and many satisfied 99 owners have never felt the need to trade up. Browning made the 99 through 1994—including the BT 99 Plus, a fully adjustable stock, high-rib model with a recoil reducer that offered every bell and whistle a trap shooter could possibly desire.

The early 99s are nicely engraved and finished shotguns. The current production guns are plainer, price-point guns that have become extremely popular with the growing scholastic trapshooting crowd. They don’t look as nice as the old ones but they shoot just fine.

The BT 100 was the same gun with a removable trigger. It was one of the all-time great trap gun deals, which I mention, perhaps, because I am the smug owner of one. It was only made for a couple of years in the 1990s.

John Browning was at work on an O/U when he died, and his son, Val, finished the job. Introduced at exactly the wrong time—1931—the Superposed somehow survived the Depression. While WWII and a taste for inexpensive, mass-produced repeaters killed off almost all American break actions, the Superposed not only survived, it became an aspirational gun. Beautifully made by Belgian craftsmen, the Superposed was a gun anyone who really wanted a fine gun could save up for.

You can argue that the Superposed frame is way too tall for natural pointing, and that the sliding forend is weird and overly-complicated. And, while both are true, they are also beside the point. The guns are excellent, and trap shooters, skeet shooters, and hunters loved them. The BROADway ribs found on some target guns were 5/8-inch wide—twice the width of the standard 5/16-inch Superposed rib—and for a time, a 32-inch-barreled BROADway was the be-all-and-end-all trap gun.

The 1100 was the gun that changed the way shooters felt about semiautos. Prior to the 1100, the recoil reduction of a gas gun wasn’t worth the pain all the malfunctions. You had to keep the 1100 clean, but if you did it worked, unlike previous gas guns. The recoil reduction of the 1100 was a revelation to target shooters, and it’s still among the softest-recoiling of semiautos. Trap shooters don’t like being pelted with empties from the semiauto shooter to their left, a problem Remington solved with a steel stud on the barrel extension that deflected empties downward where they wouldn’t bother the shooter on the next post.

The 1100 also had a stock that seemed to fit everyone, too, and while it was great, it wasn’t perfect. I believe I am recalling correctly when I say David E. Petzal told me that in his serious trapshooting days he shot some very good scores with a rotating cast of three 1100s: He had one for the trap line, one to keep in his car’s trunk as an extra, and a third with the gunsmith. Other semiautos run longer between cleanings (there’s been progress made since 1963), but the 1100 is still around and not kicking, and the synthetic-stocked Competition model is the softest shooting 1100 ever.

Nineteen sixty-four was the year the music died at Winchester—when the company brought in a team of hardware executives to manage operations. Almost overnight, Winchester guns turned from beautifully made and machined—if marginally profitable—firearms into pressed, stamped, cheapened shadows of themselves.

Winchester tried turning back the clock with the all-machined, steel-and-walnut Super X1 semiauto in 1973. Five years in the making, and designed and built with computers, it came in field, skeet, and trap models and was sold only from 1974 to 1981. Never a money maker because it cost so much to build, the SX1 still has a cult following among those who believe, with some justification, that it’s the finest, most reliable semiauto ever made.

Before there was skeet and sporting clays, there was only trap. The game that evolved from live pigeon shooting to clay targets and became tremendously popular in the United States on both sides of the turn of the 20th century. Ithaca is credited with the first dedicated single-barrel trap gun, although the other American makers followed up with their own, and single barrels are a still a staple of 16 yard and trap handicap today. The Ithacas—first the Flues model introduced in the teens, then 1922’s sturdier Knickerbocker (both named after their designers)—are beautiful guns, often lavishly engraved, and they handle well, too.

Ithaca SBTs came in a variety of numbered grades up to 7e, topped by the even more lavish $1,000- and $2,000-dollar grades. The rarest is the Sousa Grade, named for John Phillip Sousa—the “March King,” who was not only a huge star in his day, but a keen trap shooter who wrote several magazine articles promoting the sport. Only 11 Sousa grades were built, including one .410, and you can recognize them by the gold mermaid on the trigger guard.