These four famous firearms—owned by the likes of Wild Bill Hickok, George Armstrong Custer, and Doc Holliday—have never gotten the attention they deserve 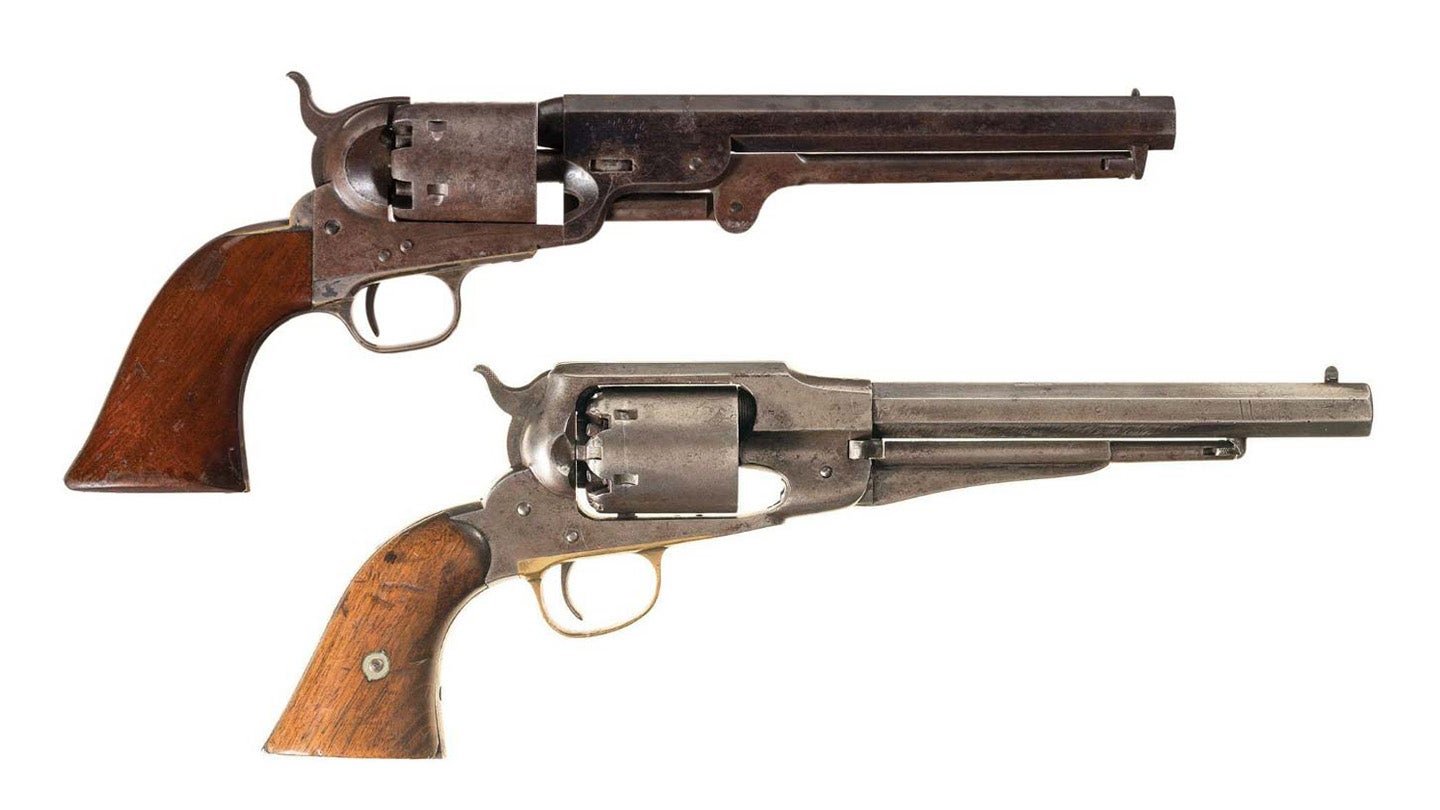 My affection and affliction with Hollywood westerns goes back to 1946, when I saw a Roy Rogers movie called My Pal Trigger. From there, it was only a decade to the heyday of the TV westerns, and thence to the more realistic (but barely so) oaters of the 60s to date. I learned a great many things about the Old West from these films: Most arguments were settled with fists, not guns. If a Good Guy used a gun, it was to shoot the Bad Guy in the hand; no one ever killed anyone. If there was a real shootout, the faster man always won, and the code of the fast draw was as scrupulously observed as the Code Duello had been for hundreds of years before. And, most important, everyone used either a Colt Peacemaker or a Winchester Model 92, which pretended it was a Winchester 73.

All of this was, of course, nonsense. Some fights were punch-outs. (Wyatt Earp was noted for his skill at administering beatings and his willingness to do so.) But not many.

(The only western lawman I know of who used his fists as a regular thing was an ex-New York City policeman named Thomas Smith, who was a pretty good middleweight boxer in the bareknuckle era. Smith was involved in the killing of a 14-year-old boy in New York, and soured on guns. He went West, became known as Bear River Tom Smith, and eventually was hired as marshal in Abilene, Kansas. Smith beat up lots of people rather than shooting them, but died in a gunfight, courtesy of an enraged farmer who shot him the chest, brained him with a rifle butt, and then cut his head off with an axe.)

In reality, if a Good Guy used a gun, he shot to kill, because the Bad Guy was doing the same. The Fast Draw, as we know it, did not exist, either the equipment or the code. You might be able to get your revolver out of the holster before the other man, but that was as far as it went. Back-shooting and killing from ambush were regarded as efficient and sensible by persons on both sides of the law.

And as for the guns, it was not all Peacemakers and faux Model 73s. Here are some of the most popular models of the Real Old West that have never gotten the respect and attention they deserve, in Hollywood or otherwise.

Originally a percussion arm, the Colt Navy had the distinction of being one of the first sixguns that you could wear on your belt and not have to carry in a saddle scabbard. At 2½ pounds, it was light for the time, and had wonderful balance and feel. Chambered for a .36 ball, it was not powerful—about the same ballistics as a modern .380. After the Civil War and the advent of metallic cartridges, the Navy was often converted to use the .38 Short Colt cartridge, which was a similarly weak sister.

But its users were not bothered, and Colt made roughly a quarter million Navy revolvers until it was finally edged out of the lineup in 1873 by the Single Action Army.

The Navy was the preferred sidearm of some men who had real knowledge of violence, including Doc Holliday and Nathan Bedford Forrest, but its most famous admirer was James Butler Hickok, who carried a pair of percussion Model 1851s, ivory-handled, nickel-plated, and engraved, butts forward in a sash. Hickok may have been the most lethal shootist ever, and the fact that he chose the Model 1851 speaks volumes for it.

I can’t recall ever seeing this one on the screen, which is astonishing because it was in some ways the AK-47 of its time. Introduced in 1866, the Rolling Block held only one shot, but a skillful user could get off 16 to 17 rounds per minute, as compared to the three per minute of a Springfield Rifle Musket. The Rolling Block was extremely strong; it managed the transition from black powder to smokeless with no modifications. It was also reliable to a fault, accurate, and chambered in most part for serious cartridges like the .45/70 and the .50/70.

The Rolling Block was in production from the end of the Civil War to the end of the First World War, and during those years it became the issue rifle for half of the world’s armies. Remington chambered it for a mind-boggling variety of cartridges, and made all sorts of variations, including military muskets.

Buffalo hunters doted on the Rolling Block; its only real competition was the Sharps. Nelson Story, preparing for his history-making cattle drive from Texas to Montana, bought 30 Rolling Blocks in .50/70 and lots and lots of ammunition, some of which his group expended in at least two major battles with Indians along the way. The latter, getting a taste of the Rolling Block’s wallop, long-range accuracy, and rapid fire, decided to fight someone else.

George Armstrong Custer, who liked to kill everything that moved, owned a civilian sporting-rifle edition of the Rolling Block in .50/70, and waxed lyrical about it. The rifle went with him to the Little Big Horn, where it came under new ownership.

So strong is the Rolling Block, and so well made, that there are lots of them still giving good service today.

“Cut-down shotguns” or “messengers’ guns,” as they were actually called in the day, have never quite gotten the attention they deserve. During the great TV Western Plague of the 50s, attention was occasionally paid, but certainly not what was due.

The coach gun originated in England in the early 17th century, where the stagecoach originated, and where banditry soon followed. It was a blunderbuss, a brass barreled, smoothbore flintlock.

In the 1860s, Wells Fargo issued short-barreled (18 to 24 inches) 12- or 10-gauge blackpowder shotguns to its guards on stagecoaches that carried shipments, not passengers. (The passengers were on their own, as far as W-F was concerned.) The guns, all side-by-sides, had exposed hammers, and were made by Remington, Ithaca, Colt, Parker, and L.C. Smith, but the most valued were the ones made by the British firm of W.W. Greener.

Messenger guns quickly found a welcome with sheriffs and marshals. They knew, as do law officers today, that if there’s likely to be shooting, you leave your handgun in its holster and take a shotgun out of the rack. Also, as a village constable once said to me, a lot of people who get brave facing a pistol or a rifle will back down when confronted by a scattergun, and it’s quite possible that a lot of the Old West confrontations involving shotguns resulted in no shooting at all.

One that did involved the homicidal ex-dentist Doc Holliday who, at the O.K. Corral, used a 10-gauge W.M. Moore shotgun to shoot a thug named Tom McLaury in the chest at a range so close that the coroner could just cover the wound with his hand.

Wyatt Earp used both barrels from a 10-gauge, probably a Greener, to kill one Frank Stillwell in an Arizona rail yard, and not long thereafter, walked through a hail of gunfire with the same Greener to end the career of Curly Bill Brocius in a gun battle at a place called Iron Springs.

Today, W.W. Greener, which opened its doors in 1829, is still very much in business, and the messenger gun has morphed into the slide-action riot gun, and then the semi-auto riot gun, and now the tactical shotgun. But its principle, and effectiveness, remain the same.

Unlike the Colts, the Remington had a top strap over the cylinder that made for a much stronger, stiffer frame. You could use heavier powder charges, and you could whack a fleeing private over the head without damaging your sidearm. Of the Army and Navy versions, the former was the more favored; it was a big, heavy percussion revolver with an 8-inch barrel and had a reputation for outstanding accuracy, which the Colt did not. (The New Model was sighted in at 75 yards, which is an eloquent testimonial to how well it shot.)

The Remington had another advantage. The company milled slots between the cylinders to retain the hammer when the gun was in its holster. (The alternative was to have the hammer resting on a percussion cap or on an empty cylinder.) For a mid-19th-century firearm, this was an extraordinary safety measure.

After the Civil War, with the advent of metallic cartridges, a great many New Model Army revolvers were converted to cartridge use in .36 and .46 rimfire. It was eventually adopted by the armies of nine countries, and was discontinued in 1875.

Foremost among its fans was Buffalo Bill Cody who, Wild West Show aside, was the real deal. Cody carried an ivory-handled .44 New Model from 1863, when he served with the Union Army, until 1906 when he gave it to the foreman on his ranch with a note that said in part, “It has never failed me.”

Or anyone else, for that matter.