A Hunting Dog’s First Year in the Field 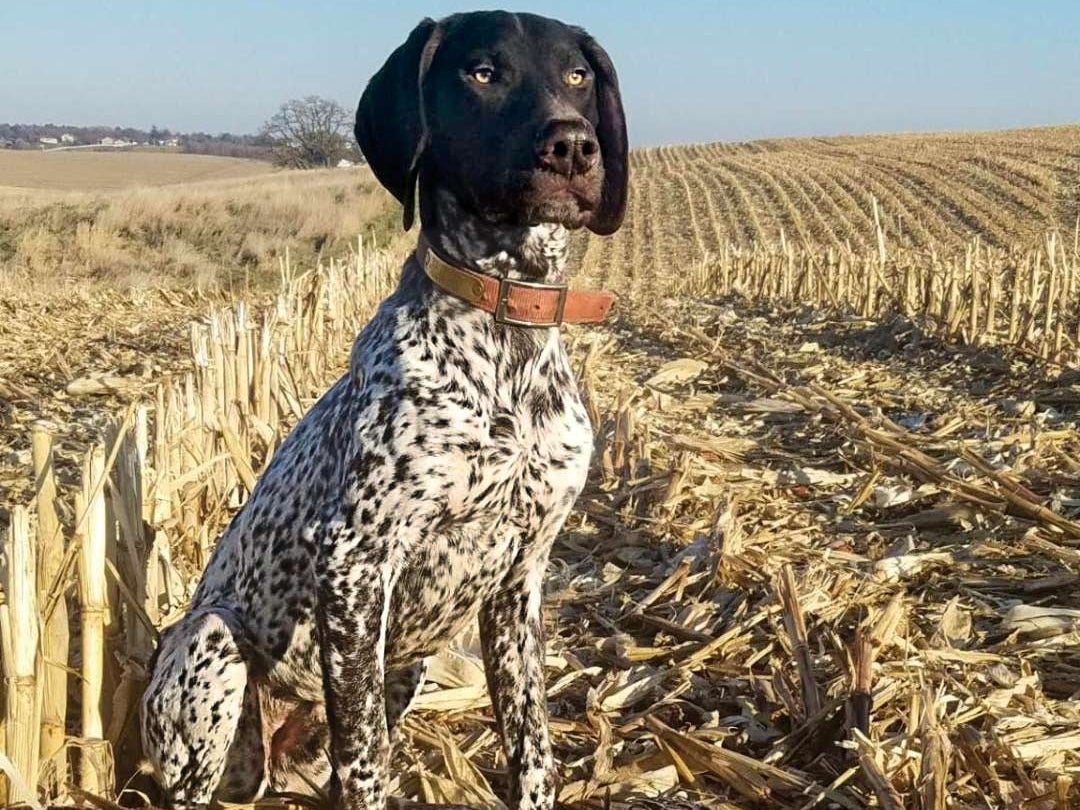 The author’s GSP, Zeke, with a pheasant. Phil Bourjaily
SHARE

It’s 2 a.m., and I’m thinking that the best thing about puppies is that it’s not long before they’re dogs. That’s grouchy and uncharitable, but I want to be in bed at this hour, not waiting in the backyard for a German shorthair pup to pee.

At least I’m not standing in snow. Pick a puppy born between March and May, and those middle-of-the-night outings take place in late spring and summer, and the puppy is just old enough to hunt during his first fall. It’s a long journey compressed into a few months, and there’s a lot to do.

Zeke yowls in his crate the whole way home from the breeder. I remember now why I waited until my old dog, Jed, was 11 to start again. Getting a puppy is like having a baby in the house. At first Zeke spends several hours a day asleep in my lap as I work, and he is cute. But there are also the interrupted nights, the cleanup, the puppy proofing, the vigilance. The playpen I bought gives me a safe place to stash the pup, but only until he learns to climb out of it after a week and not before he eats his new dog bed. What Zeke likes best is lying under the couch, where he can tear at the upholstery while waiting in ambush for Jed.

Crate training is the first order of business, then basic obedience starts at home and ramps up with puppy kindergarten at 12 weeks. Everything a bird dog truly needs to know it can learn in kindergarten: his name; the commands sit, stay, and come; and how to play well with others. The rest is instinct, honed through contact with birds, but that comes later.

At the first class, we meet the instructors plus 10 other puppies and their owners. We all wear nail aprons full of dog treats. Zeke shines at obedience and flies through agility work. But he’s the youngest in the class. He cowers under a chair during playtime, and the excitement is too much for his baby bladder. An assistant teacher cleans up messes cheerfully. Most of them are Zeke’s.

“It’s job security,” she says when I apologize for yet another puddle.

By September, I’m teaching Zeke to quarter on a check cord, walking him in zigzags, saying “hup” as I tug the cord to teach him to work back and forth. I know he’ll soon quarter in front of real guns, but it’s hard to picture when I’m in shorts in the yard and he’s still a pup.

We start making the trip up to the breeder’s once a week to work on live birds. It’s a long way to drive for 30 minutes of training, but it’s worth it for the half dozen times I bring Zeke in upwind of the pigeon launcher hidden in the grass. I get to see his body tense as the scent passes through him like a current, stiffening him into a point. Pheasant season opens in a month, and I can begin to imagine it now.

On one of our training runs near home, a young pheasant sits for Zeke’s first wild-bird point just long enough for me to get a picture. Zeke bumps a couple more birds, then learns that a mat of duckweed on a deep drainage ditch only looks like solid ground. I stand on the bank, wondering if I need to jump in and save him, but he thrashes to shore.

Soon it’s time to introduce Zeke to the gun. I believe gunfire is like recoil: Just as you don’t feel a gun go off when you’re focused on game, a dog isn’t bothered by a report in the excitement of a flush. Zeke has heard popper loads during training, but with the season a week away, we need to get serious.

I pay a preserve to put out a half dozen birds, and Zeke quickly finds a rooster. It’s tucked up against standing corn and reacts to the pup’s tentative point by flushing straight up in his face. Zeke jumps back onto my boots. Shooting now could ruin him. He’s startled, right under the gun, and the bird is speeding out of sight. I hold off.

The next flush, I shoot into the air. Zeke looks at me for an instant, then back at the bird. After half a dozen flushes and shots, he’s not looking back.

Read Next: How to Name a Hunting Dog

A few weeks into the season, I’ve shot three or four birds over Zeke, and he’s starting to put the sequence together: point, shot, thump on the ground, dash to the bird. But he’s very much a puppy, even though he is taller than Jed and weighs almost as much. I’ve been alternating dogs. On days when I want to kill birds, I take Jed. Today, it’s Zeke’s turn.

This farm is the kind I love to hunt, with corn stubble, weedy ditches, grassy hillsides too steep to farm, and messy fencerows. It’s an easy place to see your dog, unlike blocks of tall prairie grasses, and it’s the kind of old-fashioned operation that lets me cling to the belief that wildlife and agriculture can coexist.

Twenty minutes into the hunt, we’re working upwind along a grassy swale when Zeke eases into a creeping gait and then freezes. The bird flushes as I close in, and it’s an easy straightaway. Zeke runs to the bird, but I need to pick it up. We’re still working on that. I pass on another pointed bird that flies too low for a safe shot, then we collect another on an overgrown hillside.

Two hours later, we’re almost back to where we started when a rooster flushes wild ahead of us. I mark it down in a steep draw full of tall grass. Zeke plunges in from upwind, and soon the receiver tucked in my vest pocket buzzes, telling me that he has stopped moving. In a few seconds, a rooster will flush and I’ll drop it. Zeke and I will have killed three solidly pointed pheasants with three shells—pheasant hunting’s equivalent of a perfect game. We will have done it in Zeke’s rookie season.

Right now, though, I’m looking for a puppy in the tall grass. I don’t see one. What I find instead, locked up on a hard point, is a bird dog.