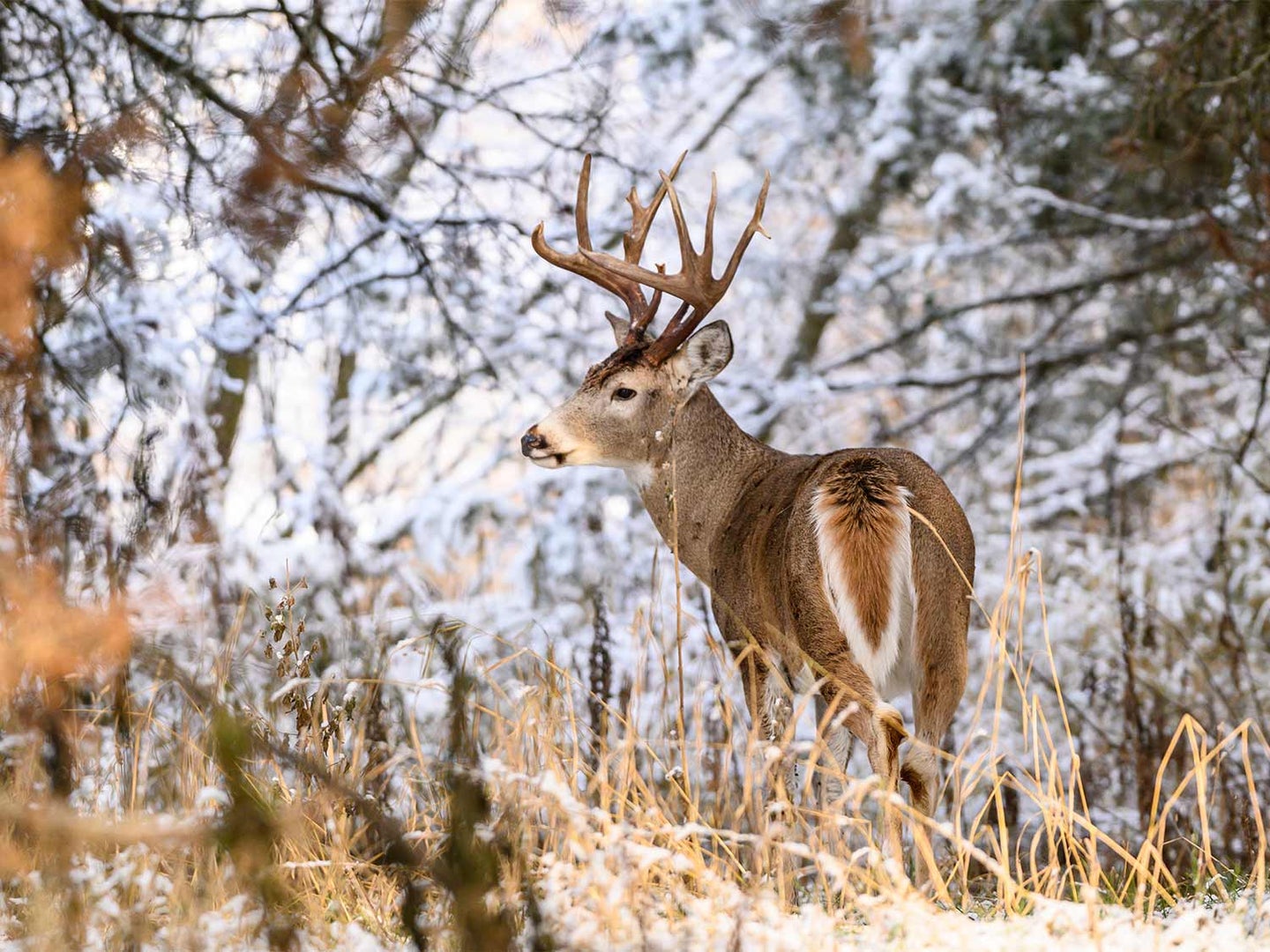 Still got a deer tag or two in your pocket? That’s not a bad thing, because the late season is a good time to fill it. Deer are hungry. They’re eager to fill their bellies and store some energy for the winter. And the colder it gets, the earlier they’ll hit afternoon food sources. On the right night, you might see a veritable herd of deer in the best fields and plots. Fresh snow puts whitetails on their feet now, too, and it leaves a record for you to read that reveals exactly what they’ve been up to.

On the other hand, deer have been hounded for months at this point in the season. Whitetails are always on edge, but right now, they’re paranoid. You’re going to have to be on top of your game. You can’t just sit in the same old stand locations, expecting to ambush bucks that have probably been skirting those spots for weeks. You need to set up in some new places, carefully chosen specifically for the late season. Here are some of the best.

1. A Major Food Source Near a South-Facing Slope

It’s not an exaggeration to say that your late-season deer hunting success most likely comes down to the quality of winter food sources on your property. If you’ve got standing beans or fresh-cut corn, say, or alfalfa or brassicas poking up above the snow, you’re going to have plenty of deer. And if you’ve got a south-facing timbered slope nearby (or other good bedding cover), the deer are going to bed in the sun and pour off that slope into your field or plot. There’s really no better winter deer hunting setup.

If you’re after just any deer, go in at midday and quietly hang a stand overlooking the heaviest trails. Ideally, you want to be able to shoot to the field and into the woods, especially if you can set up near some sort of pinch point, like the head of a wash or a downed fence in the timber. If you’re after a big buck, your best bet—if you can stand it—is to not hunt the spot right away. Glass it for a few evenings, look for a pattern, and then wait for the perfect wind to make your move with a climber or a hang-and-hunt setup. If you don’t score on any given sit, your biggest challenge will probably be getting out undetected with a field full of deer in front of you. Plan to have someone pick you up in a truck or an ATV, or wait until full dark to sneak out.

2. Bedding Cover on a South-Facing Slope

A lot of hunters skip morning hunts in the late season because deer tend to bed close to the food and bucks especially tend to bed down before first light. But there are always exceptions, and one of them is when the best bedding area—often a south-facing slope—is a fair distance away from the best feeding area. Deer don’t want to travel far to feed now, but they will, even if that means getting to bed a little later than they like.

Get in extra early with a climbing stand or lightweight lock-on that you can hang quickly. Either go when the prevailing wind is strong enough to override early-morning thermals, or hope that the deer wait until the sun hits the slope and thermals start to rise before they start trickling up from the fields below. Another option is to just wait until after dawn to set up. There can be a lot of activity in a hot bedding area throughout the morning now, as deer may get up to switch beds or nibble on some browse, and second-rut bucks may well come sniffing around for late-cycling does.

You can have the best winter food source ever—let’s say, a standing bean plot that you fenced off the rest of the season. That bean plot may even be covered up in deer tracks and littered with obvious feeding sign. But that doesn’t necessarily mean you can kill a buck there. If the deer in the area have been hunted hard, by you or your neighbors, they may very well stage just off the main food until they’ve got the cover of darkness. If that’s the case—if deer just aren’t showing up in your killer late-season food pots or ag field during daylight—the first place to look are any potential staging areas just off the main grub. Focus on spots where deer can browse and mill within the security of the woods, and look for tracks and feeding sign, and if you’re lucky even to find fresh rubs or scrapes, plan a hang-and-hunt right there.

The second place to look a wary late-season buck doesn’t have to poke his nose into an open field or plot before dark, there’s a pretty good chance he won’t. An oak tree that rained down so many sweet-tasting acorns through the fall that there’s still plenty to be had is all a buck needs to start filling his belly each evening from the safety of the woods.

These are hidden hotspots now and they’re worth finding. Take a long woods walk at midday, checking your best oak flats and ridges, looking for the sign that tells you a tree or trees are getting hit hard. It can look like a bomb went off in the leaf litter around some prized late-season oaks. Just make sure you see the droppings and deep-set hoof prints that tell you it’s deer and not turkeys churning up the place. A fresh rub or scrape is a bonus. When you find one such spot, mark it, and go looking for another. Then identify your best two or three hidden feeding areas and hunt them on a rotational basis when the wind is right for each.

What goes for hard mast now goes equally for soft—an apple, persimmon, or honey locust tree, or group of trees, that still offers fruit can be a hidden gold mine for late-season hunters. Sometimes in winter, pressured deer can seem to disappear from open crop fields and food plots, at least during daylight. When that happens, you can pretty much bet that those deer have found some prime hard or soft mast to gorge on out of sight. Deer will dig through a foot of snow this time of year to get at apples on the ground, but they especially love late-bearing trees where all they have to do is nibble goodies right off the stem. Remember, though, that even if most of the fruit is gone, late-season deer may well hit winter orchards to browse on shoots, suckers, and stems, too. So make a midday scouting run to find the best feeding sign and set up nearby.

Speaking of browse, a regenerating clearcut is the big-woods equivalent of a standing bean field or plot. If you know of one thick with aspen and/or maple saplings and overrun with dogwood, viburnum, or honeysuckle, then you’ve got yourself one of—if not the—best late-season deer food sources around. But clear-cuts are different from bean fields in that they offer not just food, but cover too. On sunny days, bucks may bed right in the cut, then just stand up and start nibbling. On overcast days or during wind or snow storms, they’ll more likely retreat to the thicker conifers and head out to the cut to feed. So plan accordingly. On a sunny day, a rifle or muzzleloader stand just inside the woods overlooking the cut may be the way to go. Whereas a gun or bow stand right on the best feeding sign in the cut could be the better option if you suspect deer are bedded a ways off.

Speaking of conifers, when winter weather is at its worst, deer almost sure to retreat to the overhead protection and thermal cover of low-lying conifers. At some point each day, however, these deer are going to get hungry and will make their way to the edges of the conifers, or a ways out beyond the edge, to browse on whatever is available—which makes those edges a heck of a place to wait them out. If there’s snow—and there probably will be if they’re taking cover—it will be easy to see where deer are exiting the thick stuff. Set up overlooking the best trails in the late-afternoon. It’s bound to be cold, so a natural blind or snow-camo ground blind may well be the best way to go.

8. Near the Barn, the House, or the Road

Every winter, after the heart of the gun season, a family of deer takes up residence in the brushy strip of woods between my house and my neighbors. I can step out onto my second-level and see them bedded there. Those deer are no dummies; they know that most hunters aren’t going to come looking for them there. Which explains why even the biggest late-season buck can often be found in oddball spots—like the copse of blue spruces next to the barn or the lone patch of phragmites just off the highway. the road. So, when you are not seeing late-season deer in the usual places, check the unusual places. Some of these spots may be off limit, but some won’t, especially if you like hunting with a bow.

Deer are going to move as little as possible this time of year. But they’re still going to move, and when they do, they’re apt to walk through the thickest, meanest places—cattail sloughs and alder mazes, cedars growing so close you can’t walk beneath them, and boot-sucking ditches and swales latticed with briars and wild rose. Sounds pretty awful right? Well, now is the time to get yourself right in there. Find the best sign and then set up close by. You won’t have a shot otherwise. Odd are you’ll have to do some trimming, but keep it to a minimum—and be ready for a close encounter.

10. Wherever the Deer Are

Unless you’re really into skiing—or you just love shoveling driveways—there aren’t many benefits to winter in the northern half of the country, but one of them is fresh snow during the deer season. Wait a day or two, and everything that the deer are up to will be written in the white stuff. This by itself is great, but it has a corollary benefit: Fresh snow reminds us to get out and scout, something too many of us forget to do in the late season. We get too focused on hunting, too tied to the same spots, too reliant on old information. Fresh snow spurs you to go out and get the most recent info.

When you do get out there, you’ll invariably find out that while some deer may be doing what you thought they were, many aren’t. Instead, their tracks will tell you that they are hammering some nondescript browse or seemingly dried up forbs that you would have never even bothered to look at otherwise. Or those fresh prints will reveal one of the oddball places mentioned above. So when the snow flies, skip a day of hunting and scout to find the absolute freshest and most revealing sign—wherever that may be—and then set up it immediately. Try it, and I’ll bet you won’t have that tag in our pocket for long.