How to Choose Your First Bird-Dog Puppy

What to keep in mind when looking for a hunting dog, plus six good breeds for beginners 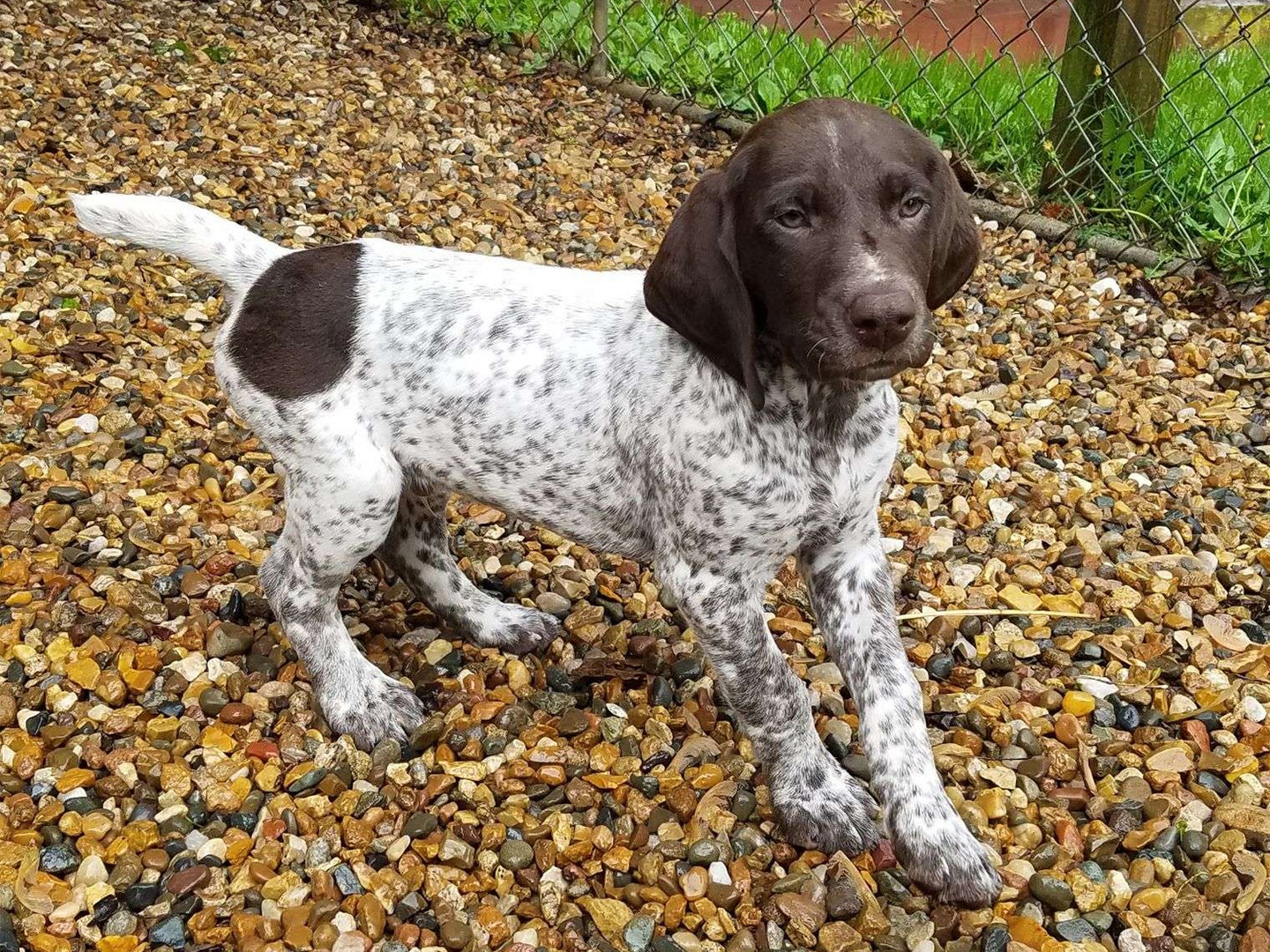 Once you own your first bird dog, bird hunting is never the same. It becomes deeper, richer, and more fully engaging. If you had to decide between bringing your dog and bringing your gun on a hunt, you’d leave the gun at home.

Making a wise, informed choice on your first puppy starts the journey off on the right foot.

Are You Ready for a Bird Dog?

Bringing a gun dog into your life isn’t something to do lightly. Having a puppy is a lot like having a toddler, especially when your hunting dog is also a house pet. It’s work. In the beginning, you’ll be up at 2:00 a.m. to take the dog outside; you’ll spend time training and exercising; you’ll have to puppy-proof your house to keep it from eating everything, and watch it, too. And, there’s cleanup. During the hunting season, you’ll have to commit to taking your new dog out as much as possible, even if it means less time in the deer stand. If you’re ready to do all of the above, start looking for a breeder. Do it soon, as you’re likely to wind up on a waiting list.

The good news is that if you pick a puppy with good breeding, chances are high that even as a first-time trainer, you’ll have a good outcome. Genetics matter. Pointing dogs are born knowing how to point, and retrievers know how to retrieve. Inherited prey drive and eagerness to please are passed down from the sire and dam.

After choosing your breed, you need to do your homework and find the right breeder, litter, and puppy.

How to Find a Bird Dog Breeder

Once you’ve decided on a breed, find a breeder. My new German shorthair puppy came from Top Gun Kennels in Central City, Iowa. Owner Steve and Jodie Ries have placed their dogs across the United States and in 12 other countries despite only raising one or two litters a year. They are the kind of breeders you want to find. I asked Steve his thoughts on what to look for as you choose a breeder and a puppy.

Ries says you should be clear that the breeder will stand behind the dog if it has any genetic defects, and that you’ll be able to ask advice after the sale. “Pick a breeder that hunts and trains,” says Ries, “Not only will you be sure to get a dog from hunting stock, but the breeder can help you if you have training questions after the sale.”

He names two red flags: “If they don’t have a waiting list, I’d wonder why no one wants their dogs.” And, he says, be sure the breeder asks about you. “If they don’t ask questions about your needs and goals, be careful. You want a breeder that’s going to help you find the right litter and the right dog.”

Ries also says you should ask what age the puppy will go home with you. “Eight to ten weeks is ideal. There’s a lot they learn from their mothers in the early days. Some breeders ship puppies when they’re too young.”

As you talk with the breeder, realize some are sizing you up, too. That’s a good thing because it means they care about their dogs. “I look over my customers,” says Ries, “My goal as a breeder is to place puppies with people who will have good hunting dogs that other people will see. I don’t want to set myself up to fail by selling to non-hunters, or people who will keep a dog chained up in a garage and not hunt them much, or people who don’t know—or aren’t eager to learn—how to train. I don’t sell dogs to people who don’t hunt, and if you ask me for a field trial dog, I’ll probably tell you our dogs don’t range far enough and you won’t be happy.”

Finally, he says, “Don’t let distance or cost dictate your choice of breeder. This dog will be your companion for 12 to 15 years.”

How to Choose a the Right Litter of Bird Dogs

As you look at a prospective litter, study the dog’s lineage for health problems. Be sure the sire and dam are certified against hip dysplasia. Check the dog’s lineage for titles as well. Look for AKC Hunt Test Titles, or, in the case of the continental breeds, NAVHDA (North American Versatile Hunting Dog Association) test results. If you see titles and championships listed and you don’t know what they mean, ask. Field trial titles, for instance, only matter if you want to compete in field trials or you need a very wide-ranging dog for western hunting. Most of us want a dog geared to the foot hunter, not one for following on horseback or an ATV. Also, you want to see the parents hunt, either in the field or on video, to get a good idea of how your dog will work in the field.

Be upfront with the breeder about your lack of experience, and they can help you find the right puppy. “If I know someone is a first-time gun dog owner, I will look for a dog from a litter that has a lot of natural ability, is easy to train, and eager to please,” says Ries.

It’s not a deal-breaker if everything else is right, but ideally, you’ll find a litter born in March or April. All those midnight trips to the yard will take place in warm weather, and the dog will be old enough by the fall to come with you in the field.

Read Next: Is the Shock Collar on Your Bird Dog Good, Bad, or Both?

How to Pick a Bird Dog Pup

There’s all kinds of advice about picking puppies. “Pick the boss of the litter” is what I always heard from my dad, but that’s only the case if you want an alpha dog. You have to think about the dog that’s best for you. Some customers have very specific ideas about the size and coloring of the puppy they want. Reis advises prospective buyers to keep an open mind. What is inside the dog counts for more than its looks.

Watch the litter. If one dog stays back and sits there, you probably don’t want it if you need a hard-charging hunter. (It might make a great family dog, though.) “We tell customers who come to our place to take a walk outside with the litter. Some puppies won’t follow, some will run off. We tell them you want to keep the one that stays with you,” he says.

Hold the puppy and turn it upside down to check it for submissiveness, says Ries. If it doesn’t resist being handled that way, it’s likely to accept you more readily as a trainer. A dog that squirms, growls, or nips might grow up to be a dominant dog that takes a firmer hand in training. It may not be the best choice for a novice.

As for males versus females, conventional wisdom is that females are softer than males, and need a lighter touch in training. Ries says that varies by breed and by line. “We don’t see that in our dogs,” he says, “Pick what you’re comfortable with. The biggest difference is that females are smaller. If you want a 50-pound dog out of our kennel, it will have to be a female because our males average a little over 60.”

You will read that Breed X requires hours of daily exercise or Breed Y is great with children, or is good for apartment dwellers, or first-time trainers, or whatever. Maybe. Breeds do have traits, but there’s also a lot of variation within a breed, so you can’t rely completely on generalizations. You still have to find the right breeder, litter, and pup. Nevertheless, the following breeds of dogs are all good choices for the first-time gun dog owner.

I am biased here because except for an English setter, I’ve had shorthairs. They are about as practical a gun dog as you’ll find. The short coats are burr-proof, yet are enough to see GSP’s through hunts in bitterly cold upper midwestern winter days. They can adapt to hunt anything, although you don’t want them for late-season waterfowling. They are terrific hunters, good at tracking cripples, and are entertaining—if energetic—clowns in the house.

There’s a reason Labs are America’s most popular breed, year after year. They are friendly, great family dogs, and have a tremendous retrieving drive. They adapt well to upland hunting, too, working in range, flushing birds for the gun, and vacuuming up cripples. Labs truly shine as waterfowl retrievers, and I’ve seen them dive all the way underwater to fetch ducks. You do have to be very careful to check the health history of your Lab puppy’s line—as they can be prone to dysplasia—and to keep them at a healthy weight.

Read Next: The 10 Best Gun Dogs for Ruffed Grouse Hunting

Brittanies—no longer known as Brittany spaniels—make a great choice for a compact pointing dog. They are small, with most weighing 40 pounds or less. They have bobbed tails, which is highly convenient to keep them from sweeping the contents of the coffee table onto the floor, and many Brits hunt up until 13 or 14 years old.

Another option for a small pointing dog is this lesser-known German breed. They look like a scaled-down, liver-and-white setter. The one I’ve hunted over the most was the best retriever I’ve ever seen in the uplands, and they can retrieve waterfowl and be trained to hunt fur as well.

My dad had springers, as does my current pheasant hunting partner. When they’re in birds and excited, their stubby tails wag almost fast enough to buzz. It’s fun to see. They are excellent retrievers and close-working flushers. Ours were good family pets, too. Springers like the water and can handle some water retrieving chores as well. They are burr magnets, though.

If style and good looks matter as much as substance, you want a setter. Dogs don’t get better looking. Setters come in all shapes and sizes. Some are bred to run big on quail plantations, others are made for the foot hunter in the grouse woods, so pick a breeder carefully. They are not as good at trailing cripples as the other breeds here, they have long, fine hair that gets everywhere in the house, and the jowly ones like mine produce astonishing amounts of drool, but they are beautiful dogs.