How to Hunt Ruffed Grouse 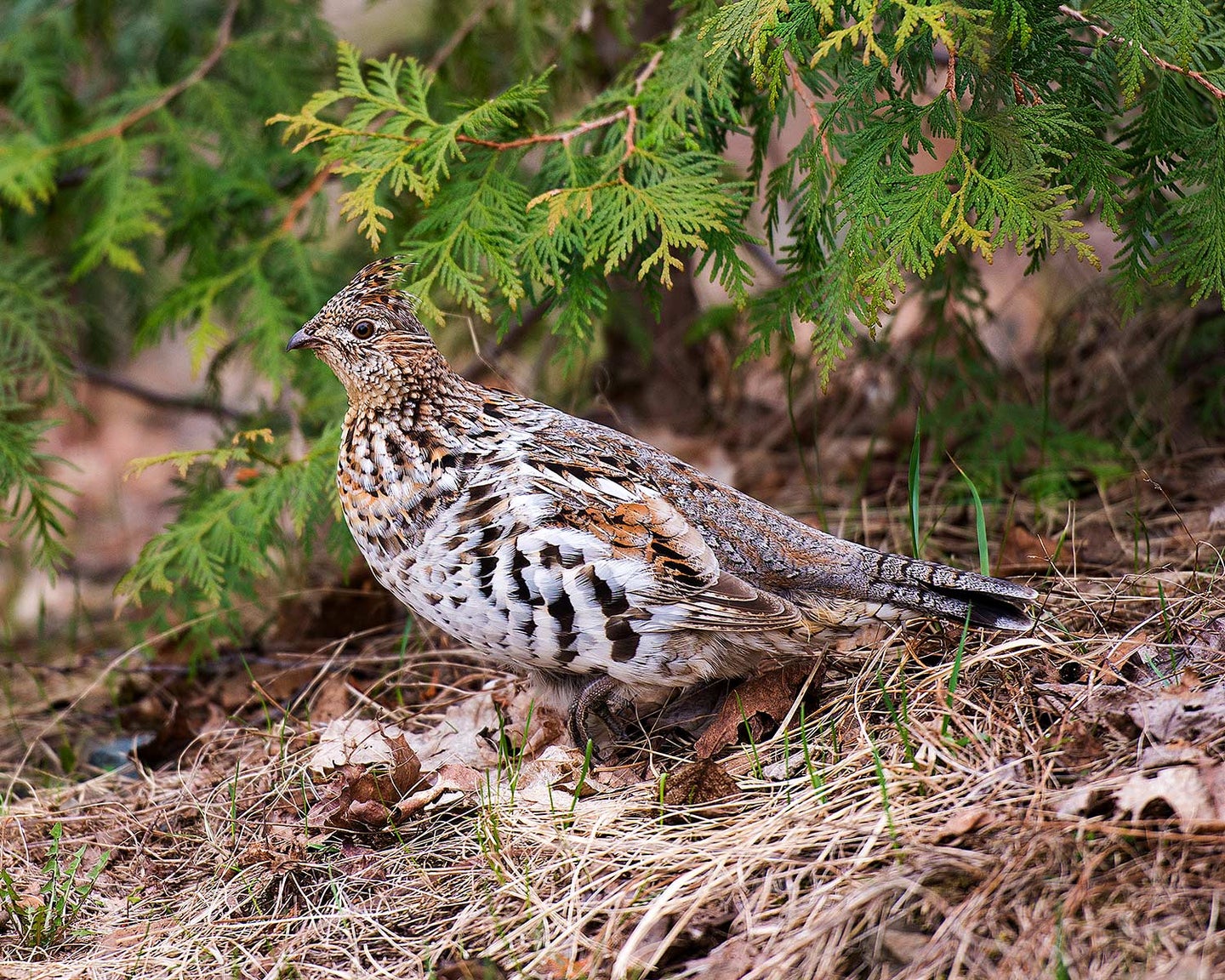 A ruffed grouse, about to flush. You’d better be ready. RejeanAline via depositphotos.com
SHARE

Ruffed grouse hunting grew up in 19th century New England, so naturally it can be a bit of a prude. So genteel in certain circles, so neatly wrapped in tradition and style, it must seem to some hunters—especially new and/or young ones—the domain of fuddy-duddies and dandies.

Don’t believe it. (I, for one, am too ill-bred to be a fuddy-duddy and way too badly dressed to be a dandy.) The truth is, getting into grouse is easy and anything but exclusive. All you really need is a reliable shotgun and a pair of reliable legs. You don’t need tweeds, or an English-made double, or even a bird dog. Just grab your gun and go…and you’ll find the fastest, funnest, most wonderfully frustrating shotgunning in the uplands.

How to Find Ruffed Grouse

There are grouse hunters who would rather share the same strand of dental floss with you than their best grouse cover. Good habitat is the secret. You just won’t find many birds in marginal habitat. On the other hand, anyone can flush grouse in good habitat. So, it’s a good idea to find some.

Ruffed grouse prefer the early-successional forest cover associated with abandoned farmland, regenerating clear-cuts, burns, strip-mines, and the like. This includes the classic covers that grouse hunters dream of: abandoned apple orchards and old pastures overrun by birch and bramble, shimmering aspen groves and dank alder runs, stone walls and cedar fences. But grouse live here (and in less-idyllic places) for unromantic reasons. Knowing of few of them can help you pin down the best haunts.

One of the most limiting factors to good grouse habitat is the availability of winter food. Fall is a feast: Apples, clover, wild strawberry, wild grape, cherry, dogwood, thornapple, mountain ash, and greenbrier are just a few favorites–and well worth the hunter’s attention. But for most grouse (except in parts of the southeast where they continue to feed on the ground), winter brings a strict diet of buds and catkins. Mostly, aspens.

It’s no fluke that the range of our most widely distributed tree closely mirrors that of our most widely distributed nonmigratory gamebird. Aspens are grouse magnets, primarily because the buds and catkins of male quaking aspen and bigtooth aspen (also known as popple or poplar) provide the majority of grouse with their single most important winter and early spring food source.

So keep your eye on the aspens: their white trunks gleam in the fall sun, and their yellow leaves shake and shimmer, like so many tiny hands waving you in the right direction.

Where aspens are scarce or absent, important winter foods include the buds and catkins of apple, alder, birch, black cottonwood, cherry, ironwood, willow, and cedar.

Whether it’s a dense grove of wrist-thick aspens, a thornapple thicket, or a stand of young conifers, grouse need thick stuff to thwart avian predators, their biggest threat. If while hunting a given area you do not at least occasionally think, Why do I torture myself walking through this stuff? you may in the wrong place.

Adult grouse are full-time residents of small home ranges (typically between 10 and 40 acres), within which they must meet all their needs. Consequently, every good grouse cover, without exception, is a place where different habitat characteristics mingle: edges.

Look for the obvious edges associated with streams, logging roads, fields, and tree groves of different species and ages. But look also for subtle edges: where a small cluster of pines, even a pair of apple trees, or a single blowdown breaks up the dominant cover. And look especially for multiple edges. Good covers always have a few isolated hotspots, and these are invariably places where several edges meet.

How to Flush Ruffed Grouse

Grouse hunters typically measure their success in numbers of birds flushed (because if they measured it in numbers of birds bagged, they’d take up a different pastime). At its simplest, flushing grouse amounts to a walk in the woods. But done right, to produce the most flushes and the best shooting opportunities, it’s closer to a carefully choreographed dance through the woods. Here are the basic steps, plus a few flourishes.

A popular theory among grouse hunters holds that if you pause intermittently, hidden birds get nervous and flush. This works. But it works best if you plan your pauses.

Move steadily though the cover and try to pause in small openings where you’ll have at least a reasonably clear shot should a bird flush. When you’re approaching an especially birdy spot, don’t pause until you’re within gun range of where you think the birds are holding. Once you get in the midst of a hotspot, pause often and for longer periods.

This is another popular tactic that’s only useful when done correctly. There’s no benefit to random zig-zagging. Instead, zig toward the most promising tangle or thicket in front of you, then zag to the next. If your hunting with friends, do your zig-zagging in a tight enough pattern that you don’t interfere with your partners.

While hunting, ask yourself which way flushed grouse are apt to fly. The answer, typically, is toward the bigger, thicker woods, especially softwood stands. Whenever possible, work toward the birds in a way that puts you between them and where they want to go. This does two things: first, it denies the birds clear passage to the best escape cover, often making them hold tighter; second, when a bird does flush, it must fly past you to get to same, giving you a better chance at a shot.

Grouse rarely fly more than 100 yards when flushed, so there’s often the opportunity to flush the same bird twice or more. It’s not always worthwhile. Stick to a game plan that’s working. But if your flushes are few and you get a good look at where a bird settles down, go get him.

There’s a real charm to still-hunting grouse alone, but you’ll put more birds in front of more guns if you hunt with a friend or two. Work together, making passes through the cover with each member moving in the same general direction on a parallel line. When a bird goes up, yell “Bird” or “Mark” to alert your partners.

Friends are also handy for staging miniature drives. When you come to a small thicket that always seems to hold birds but is too thick for good shooting, call your friend over to post while you plow through it.

I said you didn’t need a dog and you don’t. But a truly good grouse dog will help you find, flush, bag, and retrieve more birds. Anything less, however, can be more trouble than it’s worth. English setters are the traditional favorites, with Brittany spaniels, various pointers, and Labs also popular. In any case, don’t get a grouse dog on a whim, look into it carefully, and whatever you do, don’t bring your checkbook on your first trip to see pups.

How to Shoot Grouse (and Actually Hit Them)

All grouse hunters agree that humility is an important quality. Grouse possess a special genius for making grouse hunters feel stupid. And strangely, this is both the bane and the beauty of grouse hunting. Missing grouse is a given, but here are some ways to minimize the misses.

The flush of a grouse is a startling little explosion that can cause you to shoot spastically, as if out of self-protection. When this happens, you’ve been had. The best advice: always expect a flush, always keep your gun at the ready, and when a flush comes, take the little time needed to mount the gun properly and take a directed shot. You haven’t got a prayer otherwise.

People who don’t know what they are talking about sometimes talk loudly about shooting grouse from hip. Nonsense. Don’t listen to it. Yes, grouse are fast, but that’s not why people miss they. They miss because of hasty, spastic shooting. A friend of mine who has a terrible time hitting grouse always seems to shoot two or even three times at every bird he sees. Take a lesson from him: If you have time to take two or three bad shots, then you have time to take one good one. Stay calm. Be quick but don’t rush. Take a good a first shot, and then go from there.

Finally, keep at it. Don’t worry about missing grouse; everybody does it. Just get out there, enjoy the scenery and the season, and sooner or later, you’ll start hitting the damnable, wonderful things.

What to Look for In a Grouse Gun

Above all else, a grouse gun should be light and quick-handling, preferably less than 7 pounds with a barrel-length of 24 to 28 inches. Shorter barrels are ideal for quick pokes at going-away birds in thicker cover, but when you need to swing on late-season birds in more open cover, a longer barrel will help.

A quick second shot is handy, so semi-autos, side-by-sides, and over/unders are popular. But a pump will certainly do the job. (Two-barreled shotguns get extra credit for tradition and aesthetics and because they give the option of carrying two differently choked barrels.)

Most important, if the shotgun you have doesn’t exactly fit the description above but shoots bird shot and goes bang, go grouse hunting anyway. And consider saving your money for something better suited.

These are subjects of considerable and often pointless debate. We’ll make it simple. The best all-around choke for a grouse gun is Improved Cylinder (IC). If your gun has two barrels, IC for the first shot and Modified for the second. Some hunters, particularly those who shoot 12-gauge guns, prefer Skeet, Skeet/IC, or even an open bore. Anything tighter than Modified doesn’t really belong in the grouse woods (but still beats not hunting).

The best shot size for grouse is a toss-up between 7-1/2s and 8s. If you use 8s, conventional wisdom says you should switch to 7-1/2s during the late season when bare trees make longer shots more feasible. If you hunt with a double, you can put the larger shot in the second barrel only.