How to Keep Game Meat from Spoiling in Hot Weather

Caring for venison in the heat of the early season is a race against time, but also easy if you know what to do 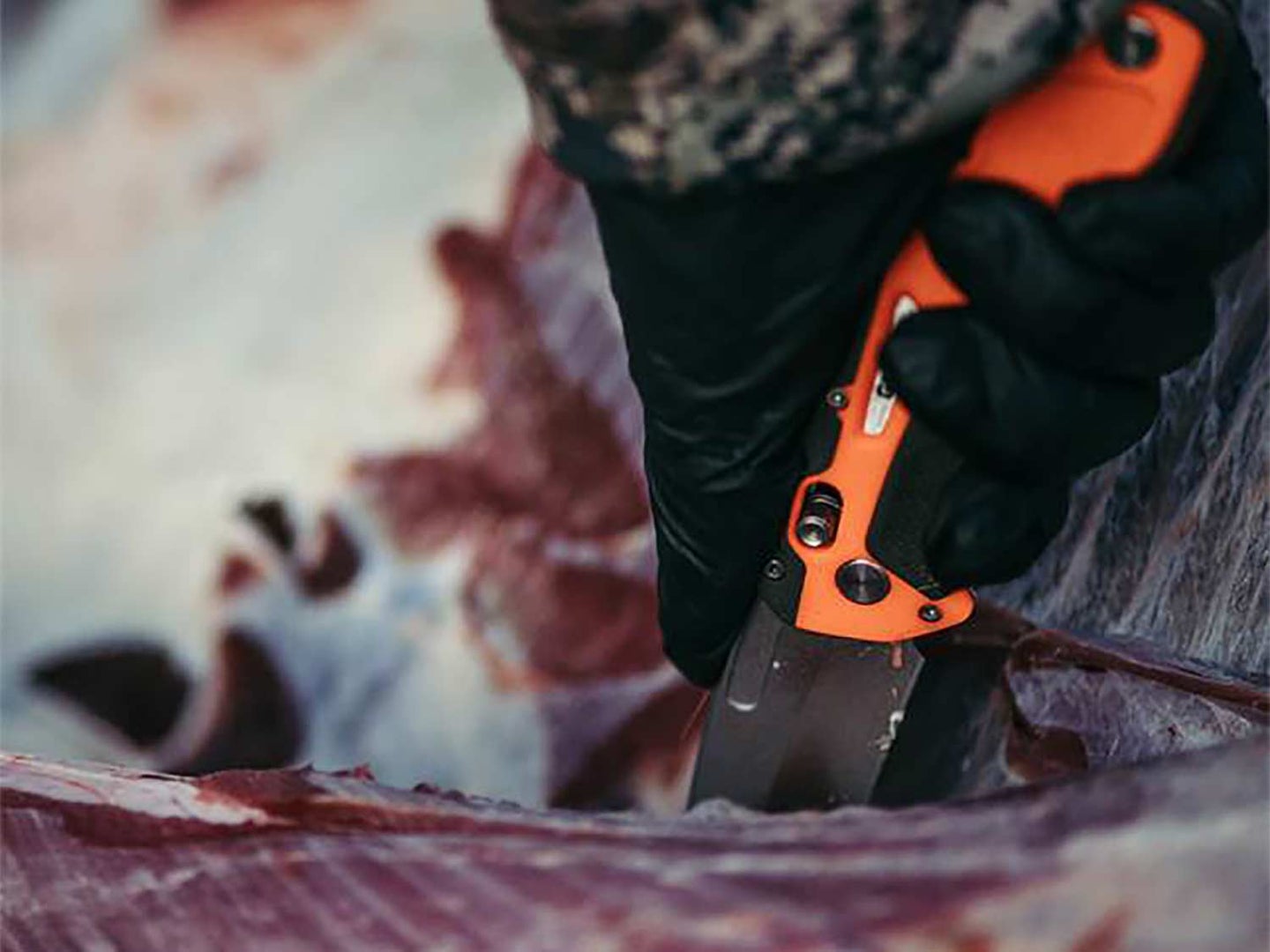 Getting the skin off and the guts out of a carcass goes a long way in cooling meat down and preventing spoilage. Gerber Gear
SHARE

You’d have thought there was a Biblical plague of insects, to walk near the elk quarters. We’d strung them up with paracord 100 yards from the tents two days earlier. I was waiting on a few open horses to pack me out to the trail head, but that ticket can take a while in a wilderness elk camp. I was becoming seriously worried about the 70-degree midday temperatures, and the swarms of yellowjackets and flies around my meat.

But we’d bagged the meat in mesh game bags, hung it in the shade, and covered it with pine boughs. The temperature dipped into the 40s at night, and even during the heat of the day, the Colorado mountain air was dry. When I got home, the meat had a crust on the outside that needed trimming away, but between the burger and steaks, that elk was absolutely fine eating.

Contrast that story with a tale from my buddy Will Robey, who’s a fellow Kentucky whitetail hunter. He shot an early-season doe a few years ago, skinned and quartered her, and then put the quarters in a Yeti full of ice with plans on aging it a few days. He opened the drain plug and propped the sealed end of the cooler on a rock to purge bloody water. The cooler was set in the shade, and the ice was checked periodically. On the third day, when Robey opened the cooler, there was still ice inside—but also a writhing pile of botfly maggots all over the meat. “They’d come in through the drain plug of the cooler,” he says. “Maybe the meat wasn’t spoiled—but I’m not keen on eating anything that’s had maggots in it. I lost that whole deer.”

It’s seldom cool enough to hang a deer overnight during Kentucky’s archery season, and so icing them down in a cooler, with the drain plug open, is the way I, and most hunters around here, have always done things. And yet Robey’s story—combined with what I’ve learned in elk camp and advice from a local processor—has me rethinking some of the steps I take to care for meat when the weather is warm. I like to think of it as an ever-evolving procedure. Here’s where I am these days.

What Causes Meat to Spoil?

Meat spoilage is caused by bacteria, and some environmental conditions are more conducive to bacteria growth than others. Temperature is obviously the big one. We all hope for cold weather but the reality is, it gets pretty warm on most days that I’m hunting big game. In my part of the world, it’s common for even late-season afternoons to top 50 degrees. Meanwhile, the USDA advises that bacteria can double in number at temperatures above 40 degrees.

So with that in mind, the first step in preventing spoilage to make a good shot and recover the animal fast. Double lung them every single time, and shame on you if you mess up. I can preach about that awhile, and then follow up with an anecdote of bumping a still-living, liver-hit buck out of its bed with my tracking dog, 12 hours after the shot. The shot on that buck had been an 18-yarder, taken by a bowhunter with 30 years of experience. Fact is, this kind of thing happens to us all when shooting at live critters, and before you get to butcher anything, you have to recover the animal—and sometimes that recovery isn’t quick. Do your best.

But once the critter is down, getting the meat separated from the organs and cooled as quickly as possible is the priority. Often I just quarter deer in the field, without touching the guts at all. It saves on a step and reduces the mess, and I can usually finish up a whitetail in about a half-hour. In our world of Chronic Wasting Disease, field-quartering is a skill every deer hunter needs to learn anyway.

But if the deer will be laying there any longer than a half-hour, or if you’re hauling it back to camp, get the guts out via traditional field-dressing. Most of the bacteria that ultimately leads to spoilage is found in the organs.

“A good field-dressing job is the number one most important thing a hunter can do,” says Charles Hart, who owns Hart Farms Processing in western Kentucky, and handles about a thousand whitetails in a season’s time—plus 1,500 head of cattle and 500 hogs during the rest of the year. “The biggest portion of meat in a whitetail is the hams. There are of course the backstraps, and a little bit in the shoulders and neck. But those hams are key. Get the deer somewhere that you can keep it clean after field-dressing. And keep a cooler of ice—I like frozen 2-liter soda bottles—in your truck. Throw ice in the cavity of the deer, and it makes a huge, huge difference. It buys some time for you to take your pictures, and then get the deer home or to your processor.”

Harts frequently sees field-dressed deer with the heart and lungs still inside, simply because unknowing hunters either don’t split the sternum or don’t reach up inside the chest cavity to sever the esophagus, cut away the diaphragm muscle, and pull the entrails out. “Meat actually doesn’t spoil that quickly,” he says. “But the organs turn fast, and once they go, it’ll ruin the whole animal. If you want to eat the heart or liver, it needs to be taken out within 30 minutes, rinsed off, and put on ice. No way I’d eat something like that that’s been in a deer for a few hours.”

In addition to heat, Hart says humidity is a huge factor in meat spoilage as well. It just so happened with that with my elk—even though the temps were higher than ideal—the dry mountain air was perfect for aging meat. Same goes for a processor’s walk-in cooler, which is cold (Hart keeps his at 28 degrees), but also has air circulating at all times. “I know guys in the late-season who’ll skin a deer and leave it hanging in the shade or barn a couple days. The temperature might be 50 degrees, but the organs are gone and the air is stirring. That meat is usually just fine.”

Read Next: A Step-by-Step Guide to Butchering Your Own Deer

Hart actually advises against covering a deer with ice in a cooler. “If you’re bringing in quarters, I’d rather see them sitting on top of the ice or on frozen jugs. The meat gets waterlogged otherwise, and though it’s still fine, it’s harder to cut and vacuum-seal.”

For that reason—and because of my buddy Robey’s flies-in-the-cooler experience—I’ve changed a few of my own procedures. For starters, I try to keep my quarters dry, and cool them slowly. After taking a deer apart, I set the quarters on a clean tarp or trash bags, in the shade, to air dry. If it’s cold outside, they might sit there a couple hours. Otherwise, when I’m finished with the deer, they go right into the mini-fridge I invested in for my shop building, and I keep them there for a day or two before butchering them.

If you don’t have access to that or a walk-in cooler, a cooler of ice is the next best thing. And if you find yourself in a wilderness camp, lacking the ice to chill something the size of a bull elk, carry game bags that protect your meat from dirt and insects, but allow air to pass through. Hang them up in the shade, with plans to get them out as fast as possible. Never put quarters in trash bags for storage. Air will not flow, and the meat will sweat right into a festering disaster that you do not want burned into your olfactory memories.

Smell the Meat and Check its Color

Just the other day, senior editor Natalie Krebs was here bowhunting, and she shot a big doe an hour and a half before dark on the edge of a soybean field. It was a typical September day in Kentucky, hot as the Seventh Circle of Hell. Though the arrow looked good, the heavy, dark blood suggested a liver hit. Krebs decided to give the deer a couple hours before tracking.

Turns out that precaution wasn’t needed because the doe didn’t run 50 yards, and was stiff upon recovery. Still, there was no foul odor to the guts, and the meat was a rich red, the way good venison ought to be. Since you can’t bring a USDA inspector into the field with you, you have to learn to look for those combinations of cues.

“My theory is, if it stinks when you get there, you don’t want it,” Hart says. “And deer meat is dark red. If you start seeing it turn a real light tan color, that’s your telltale that it’s beginning to spoil. And of course, it can take on a green tint when it really starts to turn.”

The adage on an iffy blood trail is “When in doubt, back out.” But even if it’s cold, venison quality gets pretty dicey on an animal left overnight. A deer’s internal temperature is about 101 degrees, and it takes a while for that to cool out. “We see it every year. Someone shoots a deer the evening before and doesn’t find it till the next morning. They dress it and bring it in, and you can smell the thing from 3-4 feet away,” Hart says. “That deer’s ruined. We’ve had people bring them in, where coyotes have been eating on them. Do you know what’s in a coyote’s mouth? From a processor’s standpoint, I’m not putting something like that in my cooler to contaminate the other deer that might be hanging in there, too.”

At the end of the day, preventing meat spoilage is mostly common sense. Work fast, get rid of the guts, cool the meat, and keep it dry. “Something to keep in mind for perspective—if someone brings me a finished beef to process, we get the hide off and have it in the cooler immediately,” Hart says. “If it’s a deer that you’re going to be feeding to your family, don’t you want to treat it the very same way?”