Why Learning How to Trap Can Improve Your Turkey Hunting

You won’t get rich selling furs, but setting traps for predators can help the turkey hatch on your land. Plus, it’s a whole lot of fun 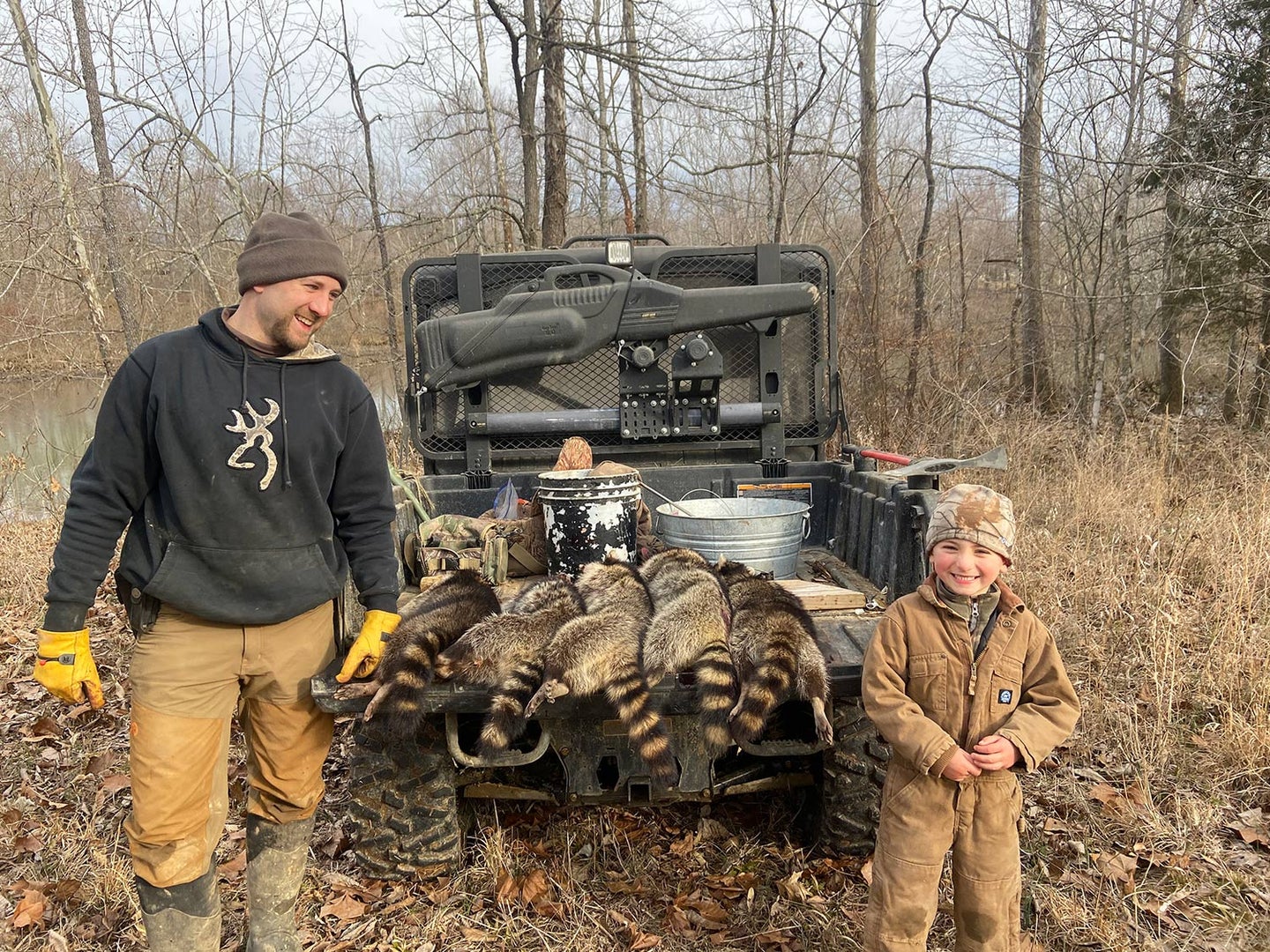 The author and his boy, Anse, had a productive day of checking traps. Will Brantley
SHARE

I started trapping to save the turkeys. Like a lot of hunters in the southeast and midwest, I’d noticed fewer birds and less gobbling during the past several springs, and I wondered why. If you ask a biologist, the most common response is: “There’s a lot we don’t know, but we’ve had a long trend of late, rainy springs and those lead to poor hatches.”

That wet, cold spring weather is bad for turkey hatches has been management gospel my entire life, and I do believe it. But in the past few years, I’ve also come to believe that we have a bigger predator problem than we once did, and that the impacts of predation on the hatch are more significant than we’ve given credit. That’s important because while we can’t control the weather, we can manage predation—at least on a local level, with targeted trapping.

I look at it like this: If you’re managing for turkeys anyway via food plots, prescribed fire, timber improvement, and so on, then trapping should be the next skill on your “to learn” list. Removing some raccoons, opossums, skunks, and coyotes from the landscape at the right time of year can do more for the localized hatch than you might realize.

Set a Trap, Save a Turkey

Interest in trapping fell along with the fur market. Though there are some people still buying furs, pelt prices aren’t near what they once were because wearing fur has become taboo in many places. There’s a pretty compelling case to be made that the decline in fur buying has caused predator numbers to skyrocket. In Missouri, for example, one of the few states that tracks both furbearer harvest and population trends, the raccoon take in 2018 was the lowest it’s been in 76 years, while the raccoon population has been rising steadily for more than 20 years. That’s eye-opening when you compare it with the turkey decline of the past decade.

But there seems to be a minor resurgence in trapping interest, with much of it driven by conservation-minded hunters. The topic of predation and its effect on game populations—and the effectiveness of trapping as a way to minimize predation—has always been a contentious issue between hunters, wildlife biologists, and conservation groups. To put it mildly, more than a few hunters of today feel that trapping’s potential as a management tool has been purposely downplayed because the practice isn’t always socially acceptable.

Dr. Grant Woods, one of the country’s best-known and respected wildlife biologists, has been hearing it for years. “I think a lot of biologists were indoctrinated in the university that predators were a non-issue, and for a long time, the message has been to tell people that trapping will do no good (for increasing turkey numbers),” he says. “I think that’s the wrong message. (In Missouri), if we look at the turkey harvest versus the fur harvest over the past 20 years, the rates of decline are almost an exact match. You’d have to be pretty hard-headed to not pay attention to that. The data shows a significant upward trend of coons, opossums, and skunks. Unequivocally, everyone is seeing more of those animals. And these are known nest predators. Not maybe. Not casually. They’re known.”

Despite abundant habitat that was being ever improved, Woods noted what had been a sharp decline in the turkey numbers on the Proving Grounds, his own 1,576-acre farm near Branson, Missouri. “We had good nesting cover,” he says. “We do prescribed burns. We cut hundreds of acres of cedars. But our turkey population was getting really low. So, we started conducting more concentrated trapping efforts.”

Over the past decade, Woods and his crew have worked to trap and remove predators every winter. This year was their most productive yet, with 115 critters taken out. “You know what?” Woods says. “Our turkeys started coming back.”

Statewide, Missouri reported another poor hatch last year of .9 poults per hen, but Woods reported one of the best hatches he’s ever seen on the Proving Grounds. “I know of other hunters who are tired of hearing that we don’t have turkeys because of the rain,” he says, “and they’re seeing the same thing.”

My buddy Kerry Wix has been trapping heavily on the farms he hunts in middle Tennessee for the past five years. While turkey numbers have been hurting elsewhere in the Volunteer State, and middle Tennessee in particular, Wix says that on his favorite places, the numbers are booming. “We started trapping raccoons four years ago, and now we hit them seriously this time of year, every year,” he says. “And, by gosh, we’ve seen more poults since we started trapping than when we didn’t, and I have farmers telling me they’re seeing more turkeys on the places we trap than they ever had.”

Call me a convert, too. Last February I tried my hand at trapping for the first time, almost always with my 5-year-old son, Anse, by my side. We caught some 25 raccoons, skunks, and opossums from the two farms I usually hunt in Kentucky, which totals a little less than 250 acres. And on those two places in particular, there were more poults, in bigger broods, running around this past summer than I’d seen in years. To be fair, we had a better hatch statewide this year than we’ve had in a while too, but coincidence or not, I’ll take it.

When Should You Set Your Traps?

Management trapping is simply a matter of temporarily reducing predator numbers at strategic times of the year. For turkey hunters, that means trapping as close to the nesting season as possible. Most predators are born in the late spring or early summer, and the young-of-the-year disperse in the fall. In February, most of the predators on the landscape are mature adults, and many with established territories. The goal is to remove enough of them to create a temporary void in the areas where turkeys normally nest—long enough for a few extra nests to survive.

Mark my words: The predators will return when the new young-of-the-year disperse again early in the fall. That’s evidenced by the steady number of critters Woods traps at the Proving Grounds each year. And this season, with a couple weeks left, Anse and I have already caught more nest predators than we did last year. Part of that is because we’ve learned more—but you can’t catch what isn’t there.

By studying the animals you catch—which is cool in itself—you can see trends that show your trapping effort is working. “For a manager, it’s important to keep track of the weight and gender off all the critters we catch,” Woods says. “On our place, the catch is now slanted toward yearling males, which have just dispersed. That makes sense, because we’ve reduced the resident population of older adult animals.”

Woods laments that the Missouri trapping season, which concludes at the end of January, doesn’t run later. In many other states (Kentucky and Tennessee included), trapping season ends the last day of February. Trapping regulations, including season dates for various species and legal equipment, seem to differ from state to state as wildly as anything I’ve yet researched in wildlife regs. I always like to write a “check your regs” CYA—but if you’re just getting into trapping, seriously, check your regs.

How to Get Started in Trapping

Getting into trapping can be intimidating because there’s a fair amount of equipment involved, and not many trappers out there to teach you how to use it. I’m not going to try to explain in a few paragraphs what’s taken me a year of work to learn, especially because I’m still a newbie. YouTube is a fantastic resource—and it helps to have a buddy or two to call with questions. I’ve leaned on Wix and my brother-in-law, both of whom have been trapping a few years longer than me. We text back and forth and share updates and thoughts on sets and bait and critter movement—plus victory photos. It’s a lot of fun. I’m also a member of a couple trapping groups on Facebook, and they’re a wealth of information.

To target nest predators, I started with a half-dozen Dog-Proof raccoon traps, called DPs for short. I bought them from a farm-supply store here, and learned to set them. Along with the metal trapping tags required by law, plus rebar and wire to secure them (I’ve since switched to chain and snaps), I still have less than $20 in each trap. I bait them with a mix of cat food, marshmallows, and sardines. I caught two big boar raccoons the first night I had them out last year, and I was hooked.

DPs are easy to use and safe, and you don’t have to worry about catching the neighbor’s dog or cat in them. Basically, each one is a cylinder with a wire jaw that’s held open under spring tension. To be fired, a critter has to reach into the tube and hit the trigger at the bottom. It’s a deadly system for predators that use their front paws to pick and grab at food: raccoons, opossums, and skunks.

“I firmly believe if every turkey hunter in the southeast ran a half-dozen DPs per 50 acres, every winter, we’d see turkey numbers explode,” Wix says. He runs a dozen of them and traps in 100-acre blocks for around two weeks at a time—or until he stops catching critters.

Trapping Makes You a Smarter Woodsman

In addition to the management benefits, I’ve enjoyed trapping far more than I realized I would. Anse has been up before daylight to run the line with me ahead of kindergarten on 10 or more mornings this year. He’s obsessed with it. We floundered a bit with foot-hold traps last year, but have sat in the evenings watching YouTube trapping videos, learning to fine-tune dirt-hole and flat sets for bigger stuff. This winter, we’ve caught two coyotes and a red fox. They eat turkeys eggs, the poults, and adult birds too—and coyotes kill more than a few deer.

That aside, I believe an Eastern coyote is the most intelligent game animal in North America. Convince one to step on a 2-inch trap pan, and you’ve done something that most people haven’t. After a lifetime of considering myself a pretty good woodsman, I can say that trapping has taught me details about wild-animal behavior that I previously didn’t know. Now, Anse and I have a freezer full of pelts, and I’ve been talking with a fur buyer. He can’t pay us much for them—but anything we get will be a big deal to a 5-year-old. It’s all new to me, and it’s fun.

I started trapping to save the turkeys. But I’ve learned that a tight chain—that’s trapper lingo for you’ve got something —is nearly as exciting as calling up a gobbler.

Turkey Hunting
Fall
Gear
How To
Huntin
In Season