21 Strange and Ingenious Uses for WD40

What can you do with a can of WD40? Lubricate M-16s, catch bigger fish, de-ice rod guides, clean turtles, repel pigeons, remove dog poo, make a flame-thrower, and much, much more 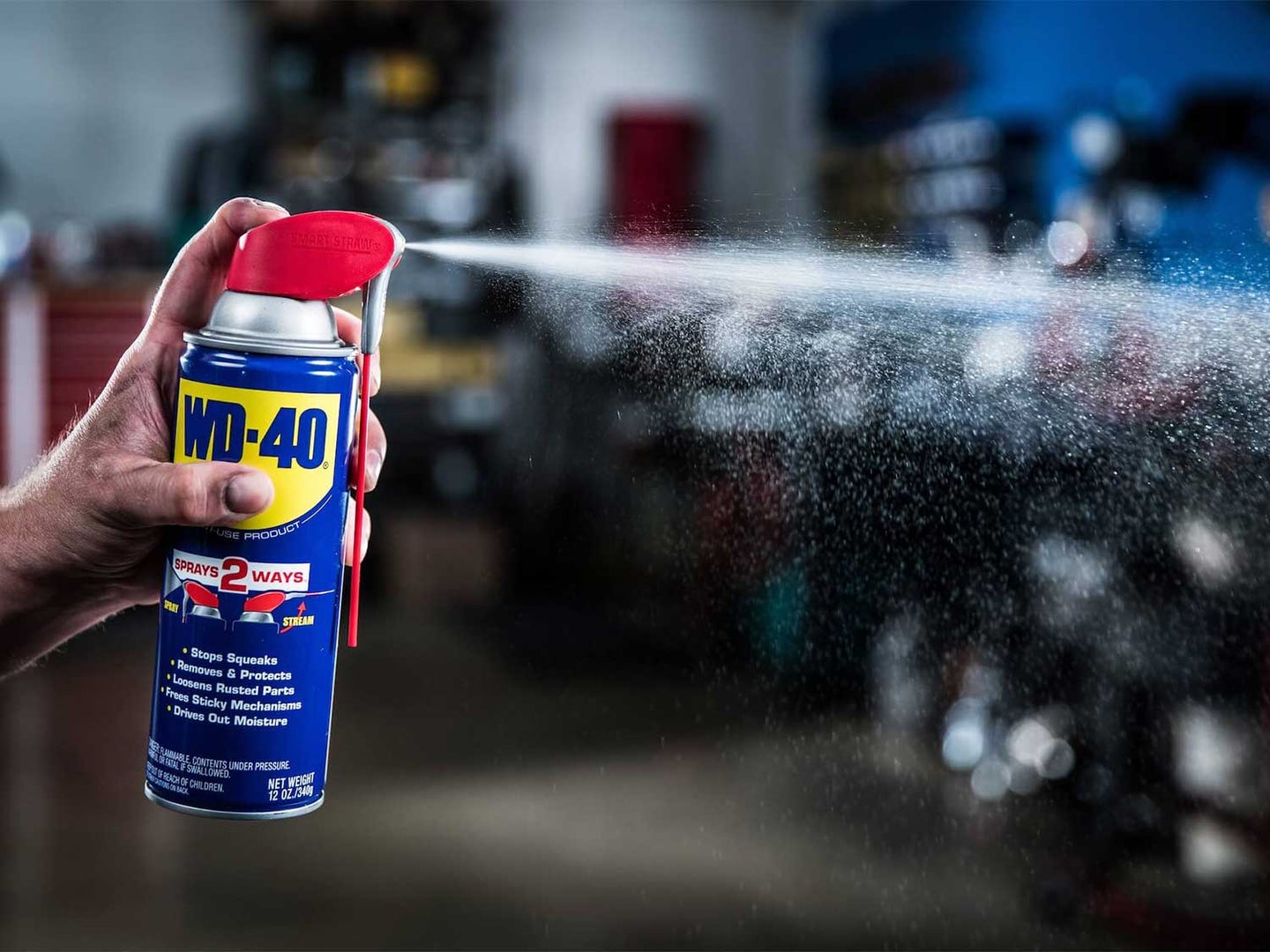 America’s most popular lubricating spray, in use. WD-40
SHARE

If you could take the American spirit—equal parts Daniel Boone, Chuck Yeager, and Elon Musk—and distill it into an aerosol, it would be a blue-and-yellow can of WD40. A 1983 survey revealed that 4 in every 5 American homes had a can of WD40 in them. Among Field & Stream readers, that figure is probably 19 out of 20.

For more than 60 years, we’ve been relying on the 40th attempt of a Water Displacement formula to fix, well, whatever needs fixing. The WD40 website promotes dozens of uses for their product, as well as a list of 2,000 uses submitted by actual users. Some are genius. Some are just plain wacky. We have sprinkled our favorite 20 throughout this article, both from that list and from the body of popular lore that has arisen around the miracle spray. As surprising as any of them is the story of just how WD40 came to be, and how it became a staple in garages across America.

Use No. 1: Spray it on dead fish bait as “a great pike attractor.”

Use No. 2: Coat wire tomato cages with it to keep insects away.

Use No. 3: It stops metal tent poles from squeaking in the wind.

Use No. 4: It removes crayon from turtle shells.

The History Behind WD40

The story of WD40 begins in 1953, when the fledgling Rocket Chemical Company—all three employees—set out to create a line of rust-prevention solvents and degreasers for the aerospace industry. Working out of a tiny lab in San Diego, it took them 40 attempts to perfect a water-displacement formula. And so Water Displacement 40 came to be. An aerospace contractor named Convair first used the product to protect the outer skin of the Atlas Missile, which had external steel “balloon” fuel tanks that were so thin and delicate that they had to remain pressurized even when empty to keep from collapsing. Over time, Convair employees began sneaking the stuff home for their own uses. By 1958, the product was commercially available.

Use No. 5: It works like magic on tangled horse manes and tails.

Use No. 6: Remove gunk from the base of the toilet bowl.

Use No. 7: It’s a great lubricant for prosthetic limbs.

Use No. 8: It shines the leaves of artificial plants.

Exactly What is WD40?

There have been all sorts of guesses about what exactly is in WD40, but the company isn’t saying. In 2009, Wired Magazine sent some to a laboratory to have it analyzed. The verdict? Fish oil, Vaseline, and “the goop inside homemade lava lamps.” Fact is, nobody knows. The formula has never been patented, apparently from fear somebody would find out. Instead, it’s a closely guarded trade secret locked up in a bank vault in San Diego.

By 1960, the company more than doubled in size, growing to seven people, and sold an average of 45 cases per day from the trunks of their cars to hardware and sporting-goods stores in the San Diego area.

Use No. 9: There are arthritis sufferers who swear by spraying it on stiff limbs. (The company, on the other hand, advises against it.)

Use No. 10: It’s excellent for removing candle soot.

Use No. 11: Great for getting chewing gum out of your kids’ hair.

Use No. 12: It’s rumored to keep the Statue of Liberty rust-free.

WD40 Takes Off in a Hurricane

The small-niche nature of the business began to change in 1961, when the first full-truckload order was occasioned by Hurricane Carla, which struck the U.S. Gulf Coast. Employees came in on a Saturday to produce extra WD40 to meet the needs of disaster victims, to recondition flood- and rain-damaged vehicles and equipment. Before long, it spread into American households and industry.

In 1969, the Rocket Chemical Company was renamed for WD40, which by then was its sole product. Early versions of the can show a rocket on the label. But by the time of the name change, it was long gone. It’s not just for rockets anymore. During the Vietnam war, packages containing the spray were being sent to soldiers to keep their finicky M-16s cycling.

Use No. 13: Takes the sting out of fire ant bites.

Use No. 14: It keeps mirrors and windows from fogging up, whether in the car or the bathroom.

Use No. 15: It repels pigeons from balcony railings.

Use No. 16: Paired with a long-handled lighter, it makes a great mini flame-thrower. (Proceed at your own risk.)

WD-40 with Smart Straw can be sprayed with or without the attached straw. Amazon

For years, the number one complaint about the product was that people lost the little red straw that came with each can. In 2005, the company introduced the foldable Smart Straw to solve this problem. (Incidentally, the Smart Straw is smarter than you think. I just today read the can and realized that you can still spray it the old fashioned way if you just leave the Smart Straw folded. Am I the only person who didn’t know this? My guess is, yes.)

Some extremely weird uses for the product have been reported over the years. Police once used WD40 to extricate a naked burglar who had become wedged into ductwork. It was used to help pull a boa constrictor from pipes on the underside of a bus. A pet owner used it to free his parakeet—and himself—from sticky mouse paper.

The unusual use most of us are likely aware of is as a fish attractant. According to the company, customers call in droves claiming that they’ve caught their biggest fish ever after spraying hooks or lures with WD40 and thus assume that the product must have fish oil in it. But it isn’t so, say the owners, and they do not recommend using the spray as a fish attractant—as if that would stop any fishermen. If it stops you, maybe you should switch to DEET or sunscreen or Johnson Wax, as the users of these products make the same claim.

Another myth the company is quick to dispel is that WD40 cures arthritis. The claim is made at least once a year in the tabloids, but the folks at WD40 say no way—and for goodness sake please stop spraying yourself down with our lubricant/degreaser.

Using a long-handled lighter, WD40 customers have reported that it makes a dandy mini-flame thrower. I just tried this repeatedly, and all it did was extinguish the lighter. But, as Marilyn Monroe once said, maybe I’m doing it wrong.

Some tout WD40 as a waterproofer for boots and shoes. It’s also recommended to stop wicker chairs from squeaking. I once duck hunted during a blizzard with a guy who sprayed it into the action of his gun to keep it working. Thing was, he had to spray it in there every half hour. Some anglers use it to de-ice the guides of a fly rod. It also stops mice from squeaking, mostly because a good shot of it will kill a mouse. It kills bugs, bees, and spiders, too.

Use No. 17: It keeps snow from sticking to shovels.

Use No. 18: It eliminates static on volume-control and tuning knobs.

Use No. 19: It cleans dog poop off tennis shoes.

Use No. 20: It camouflages scratches in cultured marble.

Sales of WD40 have gone up during the pandemic, a whopping 26 percent over the last year. The company’s CEO, Garry Ridge, says that the nationwide popularity of “isolation renovation” projects are driving the increase. The company’s market value is over $4 billion. A friend swears she once saw a bumper sticker that read, “Duct Tape Makes It Stop – WD40 Makes It Go.” If they don’t make that sticker, they should.