How Long Should You Age Venison?

We put four whitetail does on the meat pole and gathered 14 hungry hunters to answer one of the oldest and most heated deer-camp debates. The results may surprise you 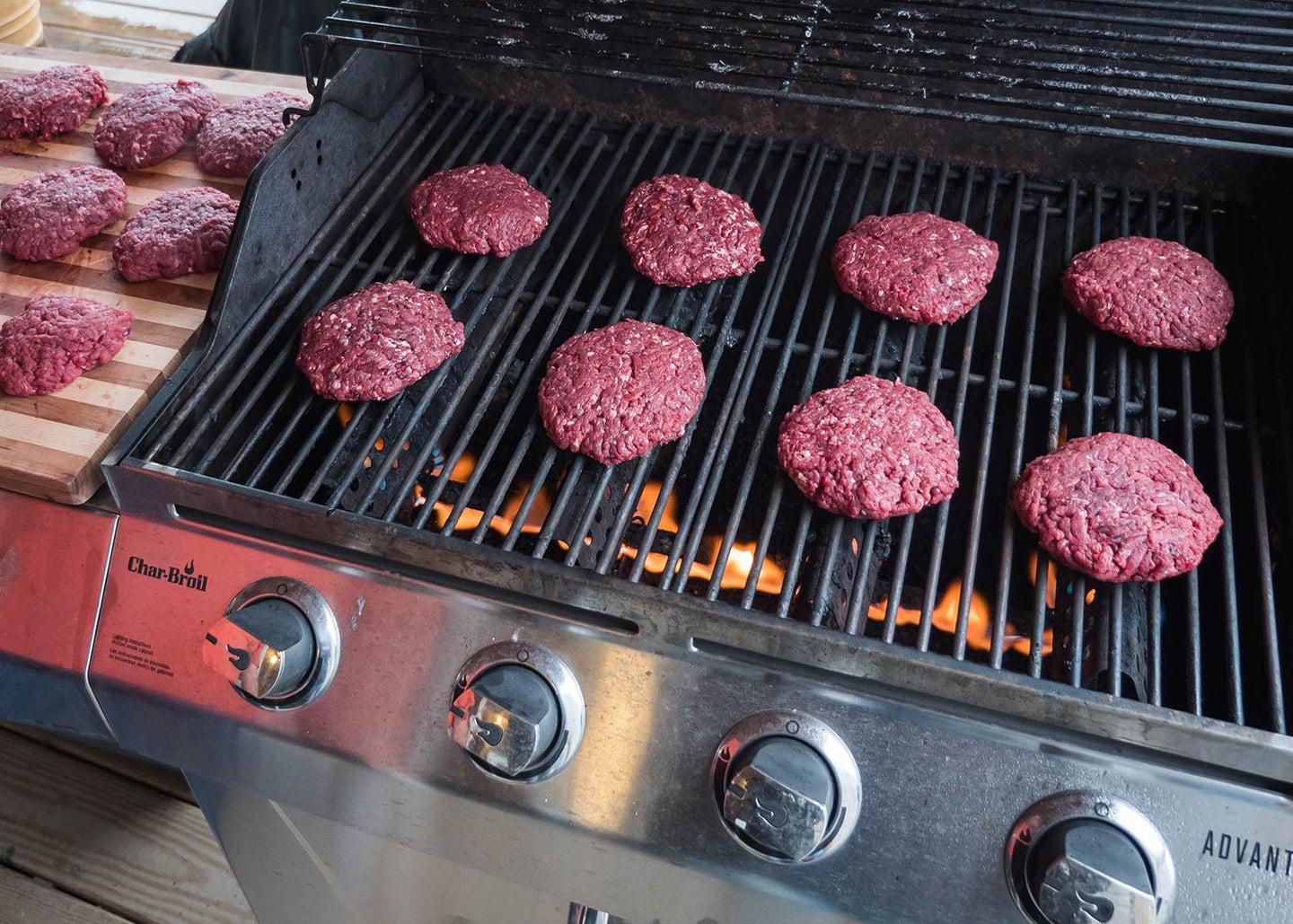 How long should you hang a deer? It’s a perennial hunting-camp debate. Some say any time on the hook is unnecessary and makes DIY butchering more difficult. Post-war outdoor writers and a lot of old-school deer hunters put the magic window at 10 to 14 days. Today, some younger foodie hunters measure hang-time in weeks, not days—and post their moldy meat pics to Instagram.

So, who’s right? Well, we aged a bunch of deer and then gathered more than dozen hungry hunters to find out.

When venison is correctly hung and aged, two things happen, says Kyle Van Galder, of Van Galder Family Farms, in Alpine, New York. First, natural enzymes break down connective tissue, effectively tenderizing the meat. Second, the muscles lose moisture over time, which concentrates flavor within the fibers. Van Galder knows this because he’s been butchering deer, as well as cattle, hogs, sheep, goats, and every other manner of livestock, for more than 20 years.

You can wet-age or dry-age meat. The former involves vacuum sealing cuts, as if you’re prepping them for the freezer, but keeping then in a cooler instead. Many meat distributors wet-age beef during distribution to grocery stores, but most meat experts agree that compared to dry-aging, it produces a more metallic and less robust flavor.

Dry-aging is when an entire side of beef, or your entire whitetail or muley, is skinned and hung in conditions above freezing, but below 40 degrees. Depending on the hang time, this process can produce concentrated flavors and fork-cut tender filets. The main downside is that the outside of meat develops a thin, dark, rind-like layer called the cap. This needs to be trimmed away while butchering, so you wind up with less meat. It’s a small price to pay, though, for the gains you get in the flavor department, says Van Galder. “I like bold flavors, and that’s what you get with dry-aging—a richer overall experience.”

How to Dry-Age a Whole Deer

The most important thing when aging a deer is keeping it cool from just after the shot all the way to the oven or grill. “Get it gutted and skinned as quickly as possible,” Van Galder says. Some hunters keep the skin on while aging deer, but this is a mistake, according to our expert. “The quicker that carcass cools down, the better the product will be,” he says. “The hide is designed to trap heat, so get it off.” Also, it’s much easier to skin a fresh-killed deer than one that’s hung a week.

Meat begins to spoil at 40 degrees and above, and it freezes at 32 degrees and colder. In both cases, enzyme breakdown slows and dehydration stops, so it’s important to keep meat within that temperature window as much as possible. Many experts agree that 37-38 degrees is where magic happens. Outside or in a barn during deer season in much of the U.S. works, but nothing beats a temperature-controlled walk-in cooler. Individual cuts can also be aged in a refrigerator, but you need to keep an eye on humidity and air flow.

Beef is dry-aged anywhere from 75 to 85 percent relative humidity. If you’ve even been in a specialty butcher’s walk-in you’ve probably seen little fans working. They’re there to help the dry-age process along. You can use a small battery-operated fan inside a fridge in the garage.

But the question stands: Does venison taste better after one day on the hook, or six weeks? Maybe something in the middle? To find out, we designed a blind taste test, with the help of Van Galder’s walk-in cooler and his expertise.

During a one-week period in November, our group shot four doe whitetails of roughly the same size and age, all within 30 miles of each other in central New York. The deer were gutted and skinned at Van Galder Family Farms and then hung in a walk-in cooler, with a controlled temperature of 38 degrees and relative humidity between 80 and 85 percent.

Over the course of six weeks, we removed identical cuts of meat from each deer at the following time intervals: 1 day, 3 days, 1 week, and 6 weeks. We then froze the meat in a commercial freezer and later thawed it, 24 hours before test day.

We roasted the backstrap in an oven at 350-degrees until the internal temperature hit 140. The shoulder and shank meat we ground into burger the day of the test, formed into 6-ounce, 1-inch-thick patties, and cooked them on a gas grill on a high flame to medium doneness. No salt or seasoning of any kind was added to the meat. Each sample was 100 percent venison.

Finally, 14 discerning hunters and venison lovers convened to blind taste the eight backstrap and eight burger samples. We asked them to score the meat for both flavor, texture, and overall experience, on a scale of 1 to 5, with 5 being the best. They were also asked to record any observations.

The old-timers were right. When it comes to steak flavor, texture, and the overall eating experience, venison aged 14 days was preferred over any other hang-time. “Soft break-down with good flavor throughout,” tester Donna Lodge, commented on the 2-week backstrap.

Four weeks, 6 weeks, and 1 week also did well, taking second through fourth place in flavor and overall experience. One day and 3 days did poorly across all categories. “Sample 2 (3-day backstrap) was dry and had no flavor at all,” said our youngest tester, teen Aidan Maphis.

The testers—all experience hunters and DIY home butchers—were quick to point out differences in texture among the various samples. Christian Maphis noted the “firm” texture of the 1-day, 3-day, and 1-week cuts compared to the “super melt-in-your-mouth, fine-grain texture and earthy flavor” of the 5-week steak. Others, like Van Galder, felt the texture became too compromised around the 4-week mark, producing a mealy, almost grainy feel.

Van Galder guessed prior to the test that lesser-aged burger would score better, as grinding can compound flavors, making meat aged the longest even stronger. He was half right, as the results were split, particularly in the Overall Experience category, where testers picked the shortest aging period, 1-day, as No. 1 and the longest, 6-weeks, as No. 2. (The fact that 1-day earned the Overall top spot, but scored middle-of-the-road in Flavor and Texture, is a bit of head scratcher, but not terribly surprising in a subjective test like this.)

Across the board, tester opinions varied more with burger than with backstrap. Some felt that the 1-week-old burger had the best flavor, for example, while the majority scored it much lower. One tester—my wife— simply noted, “It’s rank!” By the same token, while many found that the 6-week-old burger had a softer texture, some ranked that as a positive and others deducted points.

In the end, although the 1-day sample managed to pull out a win in the Overall Experience category, the most consistent performer—the one with the highest aggregate score across all three categories—was the 2-week sample, just as it was in the backstrap test.

After the results were compiled, and the hang time of each sample revealed to the testers, and plenty of back-and-forth discussion, everyone agreed that venison dry aged for two weeks tastes the best, all things considered. If you’re doing a standard cut, including steaks, roasts, and chops, leave it longer if you like a more robust flavor. Remember, four weeks took second place in every category for backstrap. If you’re going to grind most or all of the deer into burger, you might go as short as 1 day if you like mild flavor and a texture that’s not too soft, or as long as 6 weeks if you prefer the opposite. But for both steaks and burger that everyone likes, there does seem to be some magic near the end of that old-school 10- to 14-day window.

“It was fascinating to see how the flavor of venison can be changed without cooking or spices,” said tester Rick Reynolds. His deer, he added, “will all hang two weeks from now on.”