Why Hunting Mallards in Flooded Timber is So Great

When you find a hot timber hole for mallards, guard it with your life and enjoy it while the greenheads are here 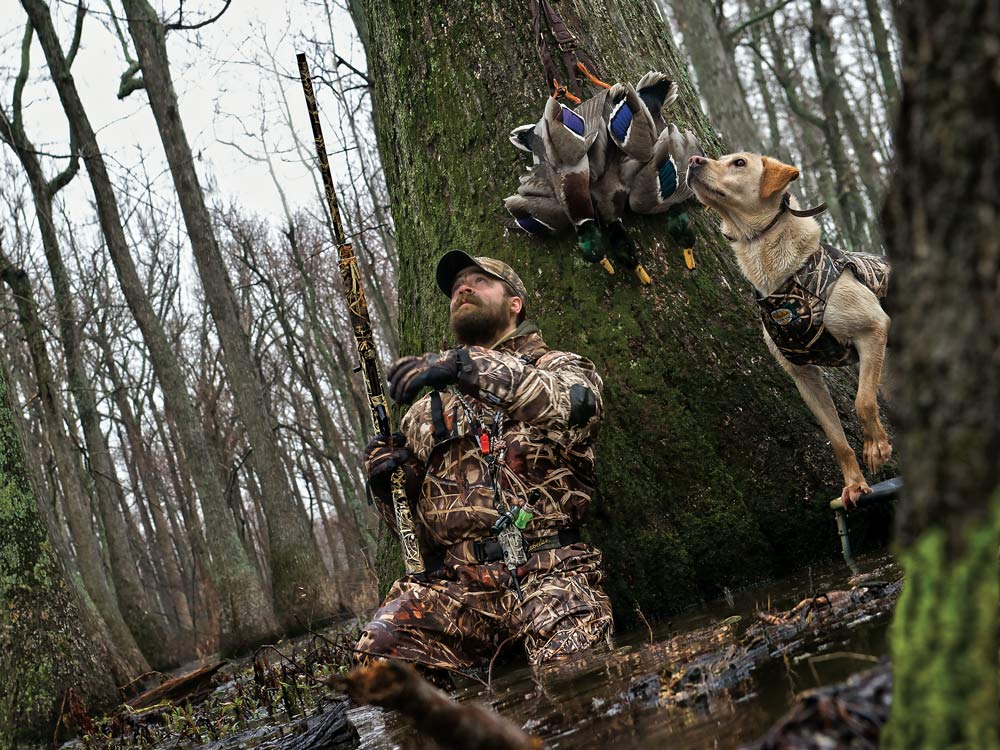 The best thing about timber hunting is the way ducks multiply. A pair starts to circle, and that pair becomes four, then eight. Eight turn into 20. Somehow, the sight of ducks working over a timber hole draws more ducks from everywhere. It’s almost like squirrels running out onto branches to see what the others are chattering about.

It can build until you’ve got flocks working at two or three levels, and there’s less need for calling than there is for air traffic control. I’ve seen that in Arkansas, but we won’t see it here—in a duck-poor state a couple hundred miles north. The two dozen mallards wheeling over our heads are as good as it’s going to get. But from where we stand, pressed tight to the trees, two dozen is more than good enough. ­Editor-​in-​chief Colin Kearns and I are doing that thing where you look down but roll your eyes up, trying to peek at ducks without flaring them, and our hearts are beating fast.

Two drakes peel off the bunch and backpedal into the hole. Travis Mueller, a Banded pro staffer, tells us not to shoot. He’s hoping the rest will follow. Kearns and I nod our heads—imperceptibly, we hope—and hold our guns ready. The rest of the ducks make one more circle, but higher and looser. Then they slide away. With the birds in the sky gone, we settle for the two in the bush. Jumping the two drakes, ­Kearns and I each shoot one. While we wish the rest had come in, the sight of these two in the trees, hanging over the decoys and lit by the morning sun, makes Kearns an instant convert to woods hunting.

Keep Flooded Timber Spots to Yourself and Close Friends

Mueller, who scouts as hard as anyone, found this spot in spring by looking for beavers. Beavers plus woods equals flooded timber anywhere, and we’re standing in knee-deep water in the soft maples and willows growing between a couple of oxbow ponds. Mueller hunts here to get away from the crowds on the big water, but crowds have a habit of following successful hunters.

The first rule of timber hunting: No one talks about timber hunting. Good hunters are secretive. Mueller is a great hunter, so it’s no surprise he’s long since crossed the line from secretive to completely paranoid. We left the ramp extra early this morning to avoid detection. Even so, Mueller fretted the whole way that a couple of kids he thinks are watching him might have found his spot.

When we got to the hole, Mueller was sure his enemies were onto him. Three hundred mallards that had been sitting here yesterday weren’t here; someone must have run them out. And the decoys were missing—no doubt, in Mueller’s mind, stolen by the competition. As Kearns and I found fallen trunks for our gear, Mueller was looking for the bag of decoys he had stashed. We could hear him sloshing and cursing in the darkness.

In traditional flooded green timber, a lack of decoys wouldn’t be a problem. Old-school hunters in Arkansas relied on calling and ripples kicked in the water to attract ducks and went without decoys. Here, though, decoys and spinners are an advantage. There are no acorns to attract ducks. Birds don’t come to flooded soft woods to eat. They want a place to hide out and loaf. The ducks we’re after are trading back and forth between a couple of refuges, or coming back to the woods after feeding in the cornfields. They need enticement. In the words of a famous timber hunter: “There are two places you can kill a duck. Where he wants to be, and where he don’t mind goin’.” This is a don’t-mind-goin’ spot, hence, the need for decoys and spinners.

When Mueller finally shines his flashlight in the right place, he finds the decoy bag. The hole is still secret. In fact, we’ll see no other hunters nor hear any shots but our own this morning. Those 300 mallards? Who knows. They were probably fresh arrivals that dropped in, then found other ducks and relocated.

Read Next: 10 Tips for Decoying Ducks and Geese

With two dozen decoys in the hole and four spinners going, we’re looking good. Spinners work well in the woods, Mueller believes, because ducks lose sight of them, then see them again, as they pass over the latticework of branches. And the sun is shining. “Sun’s out, guns out” is a truism of timber hunting. Decoys show up, spinners flash, and the sun creates shadows that make it easy to hide beside a tree.

Mueller blind-calls, quacking at random intervals to whom it may concern. Often in timber hunting, you don’t see the ducks you’re calling or decoying until after they have seen you. We’re not aware of the flock until we hear the whoosh of wings overhead. When the birds drop in I miss, Kearns kills a greenhead, and Mueller shoots a bluewing drake, fully plumed, unheard of at this latitude with 10 days left in the season. It’s been a strange migration year.

We peck away at a few more, and call it a morning, being careful to pick up our hulls both because it’s what you do, and to hide any sign of our presence. For good measure, we pack the decoys out, too. A flooded hole in the woods is worth keeping secret.