Listen up grandfathers: It’s up to you to get the right shotgun 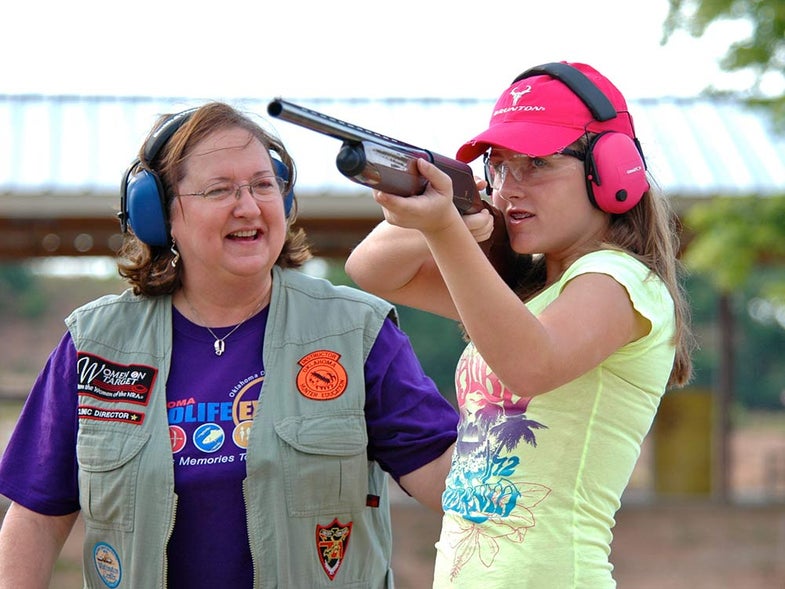 A young shooter gets a lesson at the trap range. National Shooting Sports Foundation
SHARE

Frank writes:
My 11-year-old granddaughter has joined a trap club and is using a 20-gauge Remington 11-87 with a Modified choke that I gave to her. In her first meet, with only six practice sessions under her belt, she shot a 94/200, which seemed pretty good to me.

Should we continue to work with the 11-87, which is a field gun, or should she be handed a trap gun? If we move forward with the field gun, should we change to a different choke tube? A Skeet or Cylinder? If she needs a trap gun, what kind would you recommend?

First of all, thanks for taking an interest in your granddaughter’s shooting, for buying her a sensible gun, and for asking for advice about the next gun. Guns from grandpa are one of the banes of my existence as a trap coach. (I say that in full recognition that if even one bane of my existence is kids shooting the wrong gun, my existence is going very well.) Kids love guns from grandpa, whether they are appropriate for trap shooting or not, and therefore insist on shooting them in the face of almost any argument, including strings of 0s on a scorecard.

So listen up, grandfathers: You have an important responsibility to get the guns right.

This season we’ve had to deal with two unsuitable grandfather guns: an ancient H&R single-shot 20, and a 20-gauge Wingmaster, both in the hands of struggling shooters who refused to give them up. (Twenty-gauge Wingmasters are wonderful guns for many things, but trapshooting is not one of them.) Fortunately, the H&R problem took care of itself when the gun’s stock split, leaving the boy no choice but to shoot a loaner gun—a Browning BT-99—and immediately he picked up about eight targets per round. For the first time ever, he started smiling at practice, too. His parents bought him a 12-gauge 870, and he’s doing well with it. I was able to get a 12-gauge Beretta 391 sporting gun into the girl’s hands on some pretext or other, and she started breaking targets right away. Her father took note and bought her an 1100 Competition. Now she shoots in the 20s, and grandpa’s 20-gauge Wingmaster will stay home until hunting season.

That said, what kind of gun your granddaughter should shoot depends on how serious she is about trap shooting, and how serious her club is.

Trap is much more easily shot with a trap gun. If she is serious, it’s hard to beat the BT-99 for singles trap. If she plans to shoot doubles, skeet, and/or sporting clays, those blue Beretta A400s are very good and popular among scholastic shooters. A good all-around target O/U is the Browning CXS, which comes in both 12 and 20.

As for choke, the old advice was, start with a Full, because new shooters don’t get on targets very quickly. Then, as you gain skill, experience, and speed, open up to a Modified. Improved Modified makes a good compromise between the two. Although you can break 16-yard targets fairly solidly with IC chokes, I don’t think the extra pattern spread makes a lot of difference, and you may lose a bird or two with weak hits.

Your granddaughter is 11, which probably means she’s about to grow, and the more she shoots, the easier time she’ll have handling a 12-gauge, so there is no immediate hurry. Right now, she should keep shooting her 11-87 with a Modified or Full choke, and after she has shot some more, she might see if she can try some other guns at practice to find out what suits her. She may have a better idea of how serious she is about trap shooting, then, too. If and when she moves up to a 12-gauge target gun, make sure she shoots light 7/8- and 1-ounce loads out of it.