10 Tips for Patterning Your Shotgun for Hunting Season

Follow these steps to find the most lethal choke-load combo 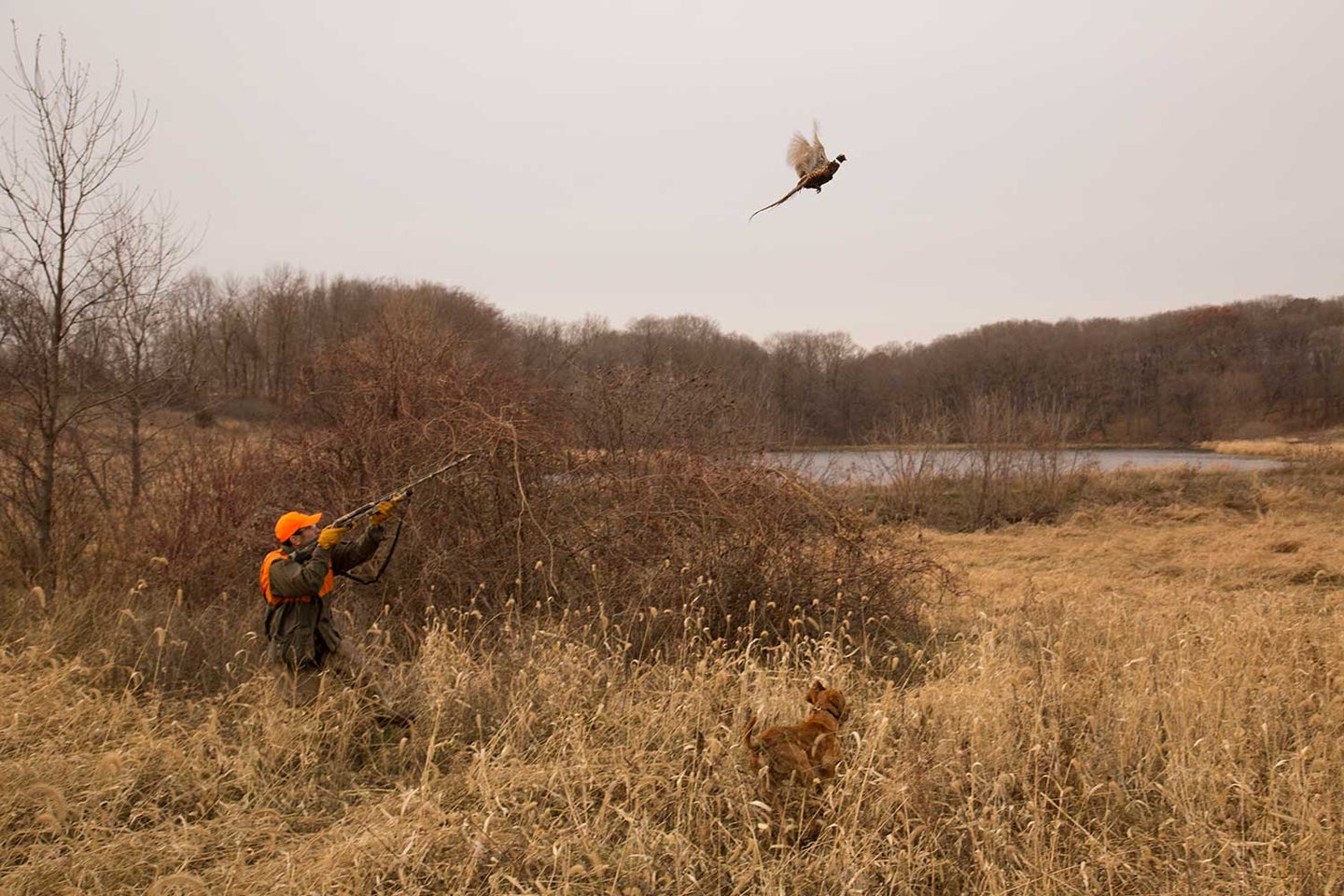 Among the pre-season chores—painting decoys, training dogs, getting in shape—patterning your shotgun may be the most tedious, unless you are a gun nerd who enjoys counting holes in paper (I am guilty here). Patterning your gun teaches you your maximum range, and identifies choke-load combinations that make it easier to hit birds and kill them cleanly. Patterns have their quirks, oddities, and mysteries. Understanding them will help guide you through a useful patterning session:

1. Every Shotgun Pattern Is Different

Like snowflakes and fingerprints, no two patterns are alike. And, there can be surprising variability from one shell to the next in the same box. Therefore, when you test shells and chokes, shooting just one pattern isn’t enough. Three is the bare minimum and often with three you’ll see two that are similar and one that’s quite different. Five gives you a better picture; 10 is best. Beyond 10, you reach a point of diminishing returns.

2. There Is No Such Thing as an “Even Pattern”

All patterns have holes. It’s the nature of their distribution. All patterns are also denser in the center than they are on the edges (until you start fooling with some spreader loads). An “even” pattern doesn’t mean one pellet strikes each square inch of a target, although that would be ideal. It means the pattern has few gaps and good distribution in the fringes to make hitting easier. Too much choke results in a pattern that’s extra-dense in the center and sparse on the edges. Too little choke shoots patterns that are patchy all over.

The most effective patterns are the ones that put 70 to 80 percent of the shot charge into a 30-inch circle at whatever range you’re patterning. Those will be generally not be too dense in the center, and should put plenty of pellets in the outer fringe of the circle to help you hit birds when you mispoint the gun slightly.

4. Shot Strings Don’t Matter as Much as You Think

A pattern on paper is a two-dimensional representation of a three-dimensional swarm of shot. Shot strings lengthen as the payload flies downrange. At 40 yards, that swarm can measure as little as eight feet long to as much as 18 or 20 feet long. Most truly long shot strings are made by heavy magnum lead shells that aren’t used for much but turkey hunting anymore. Steel strings are comparatively compact, as are the shot strings of lead loads that use high-quality, hard shot.

In the days of lead shot for waterfowl, the long strings of inexpensive soft-shot magnum lead loads were a problem (as proven by Bob Brister in the classic Shotgunning: The Art and Science), especially for long-range pass shooters, as many trailing pellets arrived too late to hit the target or could hit birds behind the target. Steel loads string much less—only about eight feet at 40 yards.

If you are worried about shot string, shoot tighter chokes and bigger shot, both of which will shorten strings—although you’ll have to take my word for it, since there’s no way outside a lab to measure the string.

5. Pellets Draft Behind Other Pellets

When shot exits the muzzle, the leading pellets slam into a wall of air, and the pellets behind them get a comparatively free ride, just like cyclists, racing cars, and semi-trucks behind a leader. That drafting keeps the pattern tight, as the pellets behind the leaders aren’t battling air resistance and can fly true.

A few pellets will draft behind others all the way to the target, and pass through the same hole. I have seen this phenomenon on high speed video and in ballistic gelatin. So, you’re probably hitting the target with a few more pellets than you think you are.

Shotguns are traditionally patterned at 40 yards (.410s were patterned at 25, reflecting their poor ballistics and small shot payloads), most likely because 40 yards used to be maximum range of a shotgun. Plenty of shells shoot farther now. But the range to shoot patterns is the range you shoot your birds. If that’s 40 yards, great, pattern at 40. However, if your average shot is 25 yards at a flushing birds or ducks hanging over decoys, pattern at 25. If you’re a pass shooter, you might need to pattern at 50 yards.

7. And What’s the Best Circle Size for Pattern Testing?

Shotgun patterns are counted inside a 30-inch circle for a reason. Thirty inches is about the maximum useful spread of a pattern. Mispoint by more than 15 inches, and you might get lucky with a stray pellet— but you most likely won’t.

Turkey loads are the exception. It makes a lot more sense to look at pellets in a 10-inch circle when you test a turkey gun. You don’t want a wide spread of shot anyway, which will only put non-lethal pellets into the meat. Instead you want to see how many pellets you can crowd into a circle that covers the head and neck of the bird.

8. How to Measure a Pattern on Your Target

Pattern testing and point of impact testing are two different processes. Today, we’re talking about pattern testing, so the way to proceed is to shoot first, draw circles second. That way it doesn’t matter where on the paper your pattern hits.

There are pattern targets with 30-inch circles pre-drawn on them. I don’t like them, because unless the pattern is perfectly centered in that circle, it doesn’t help you if you hit off-center, which will give you misleading pellet counts. Pick paper that’s wide enough (36 inches or more; 36 inches is the width of the rolls of paper I buy at home-improvement stores), make an aiming mark on it with a Sharpie if it helps you, then shoot. Use the center of the densest part of the pattern as the center of your 30-inch circle. A marker and 15 inches of string makes a good enough compass for drawing your circle.

9. When In Doubt, Test Your Gun Some More

If your gun shoots a deadly pattern at 30 yards, don’t assume it will shoot an almost-as-deadly pattern at 35 or 40. Patterns don’t open at the same rate, for one thing. Open chokes tend to spread in a cone shape, opening steadily and falling apart quickly. Tight chokes often shoot patterns that stay tight for a while, the sort of “bloom,” opening up at longer ranges. In either case, patterns can decay very quickly after they open to an effective size. I’ve seen this with buckshot especially, but also with lots of different shells.

If you want to know for sure what you gun does five or ten yards down range from the distance you patterned it, set some targets at those distances and shoot some more patterns to find out.

10. How to Get the Most Lethal Choke-Load Combination

If you want to pattern the “right” way and determine what percentage of pellets a given choke and load combination puts onto paper, the first thing you do is take five shells out of the box, cut them open, count the pellets, and take an average. You’d be surprised at the variations from lot to lot in pellet count. Looking up pellets per ounce online only gives you a ballpark number.

Then you shoot 10 patterns, draw 10 30-inch circles, and count holes. Then you average those counts, and divide that number by the pellet count you determined earlier to arrive at the percentage.

Or, you can skip all that because percentages don’t kill birds. Shoot your patterns and count the holes. Look for a pattern that’s neither overly dense in the center nor patchy all over. Consult with a table like Tom Roster’s CONSEP Lethality Table (published in many state’s game regs) and see if your choke-load combination is putting enough shot on target to take whatever game you’re after. If it is, put your rolls of paper and your staple gun away and go hunting.