The 9 Most Common Shotgunning Myths, Explained

Learn the truth about shooting a shotgun, and you'll hit more birds 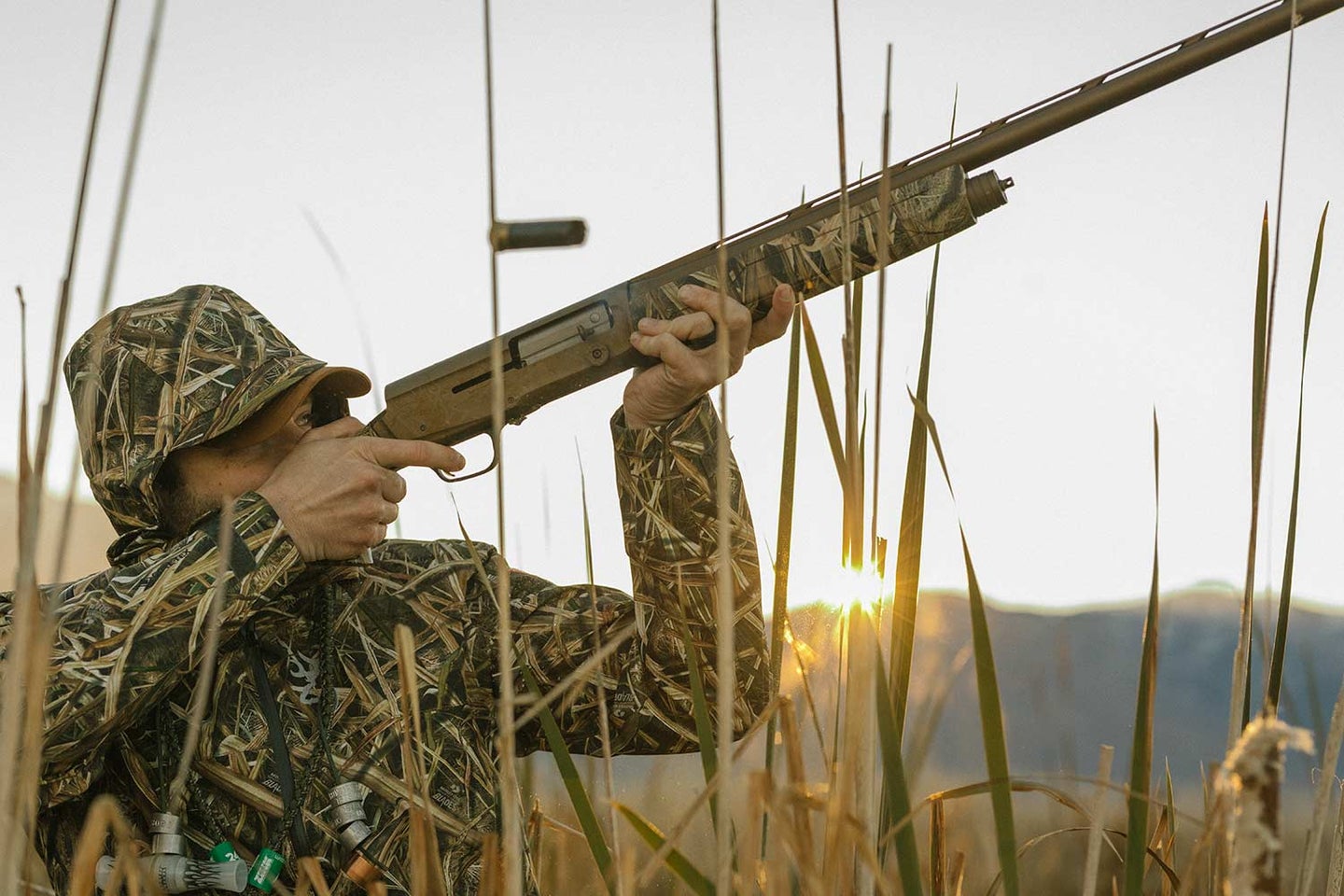 Shotgunners say, “A hit is history, a miss is a mystery.” Confronted with mystery (why the Cubs can’t win a pennant, what holds up planet Earth, why we missed that duck), mankind explains it with myth (the Curse of the Billy Goat, a stack of turtles, a blown pattern). Since we can’t see pellets in flight, we’re free to invent fanciful explanations for their behavior. Consider the following myths, which I’ve heard repeated time and time again.

The idea that steel shot patterns poorly and even shoots “blown” patterns through a Full choke arose, in part, because large pellets—BBBs, Ts, and the like—often do pattern very well through open chokes and because manufacturers discouraged the use of Full chokes in the early days of steel for fear of barrel damage. However, almost any load of BB or smaller steel will shoot tight, deadly patterns through a Full choke and won’t harm choke tubes, either.

A trapshooter at my gun club explained to me how to hit the wide left and right targets from posts 1 and 5 the other day. “Just shoot way out ahead of them because your patterns string out so long at 40 yards that the target runs into the shot”—as if, say, your shotgun were projecting an asteroid field into the path of an orange flying saucer. Although the pellets in a shot load may stretch to a 10-foot-long swarm at 40 yards, they’re all traveling over 400 mph, during which time a clay target or bird moves only a few inches.

Think of it this way: if a locomotive was speeding through a crossing at 400 mph could you broadside it with a bicycle?  A long shotstring provides only a minuscule added chance of hitting a moving target if you shoot too far in front (the rarest miss) and actually reduces your chances of hitting long-range crossing targets you lead correctly.

Small shot, the argument goes, pokes through feathers and flesh like little needles, penetrating deeper than larger pellets, which strike like blunt no. 2 pencils. It makes sense, until you do the math and realize that larger pellets actually have a greater sectional density (weight divided by diameter squared) than smaller pellets. The greater the sectional density, the deeper a projectile penetrates. Small shot versus big shot isn’t the difference between being poked with a needle or with a pencil; it’s the difference between being stabbed with a needle or with a spear.

“I’ve shot 10,000 quail in my life, most of them with a .410 bore,” an Arkansas bird hunter once told me. “A little gun like that shoots tight as a rifle.” The truth? Pattern spread is entirely a function of the choke in the barrel, not the diameter of the barrel itself. You can prove this to yourself on a sheet of paper: Shoot a 12 and a .410 with the same choke and you’ll see identically sized patterns. The difference is that the 12-gauge pattern will have a lot more holes in it, which is why it’s easier to hit with a 12 than with a .410.

Many also believe a shotgun with a tiny, .41 caliber barrel must shoot slugs fast and flat, hitting hard “like a high-powered rifle”. Look it up in any ammo catalog. Weighing ¼ to 1/5 of an ounce, .410 slugs lose velocity quickly, arriving on target no sooner, and shooting no flatter, than 12 gauge, 1-ounce slugs. At 100 yards, they retain a little over 200 foot-pounds of energy, about 1/5 the energy of a standard 12-gauge slug at the same range. The .410 is, at best (and where legal), a sub-40 yard deer slug.

Many people believe magnums are faster and hit harder than standard loads. That’s perfectly true if you’re talking about rifles; centerfire magnums are loaded to high velocity, but magnum shotshells contain heavier shotloads. And, as manufacturers increase the shotload they have to decrease velocity to keep chamber pressures at safe levels. Therefore although magnums have more shot, the individual pellets aren’t getting to the target as quickly or hitting as hard as pellets from a lighter, high-velocity load. If you consistently hit birds in the back end with magnums, lighten up and see what happens.

You will read that powder burns entirely in the first 18 to 19 inches of the barrel, so any additional barrel length has no effect on velocity. This is untrue. Shotshell velocities don’t change as dramatically as do rifle velocities as barrel length increases or decreases, but they can differ a few feet per second per inch of barrel, especially with the slow burn-rate powders used in many steel loads. Bear in mind that manufacturers typically list shot-shell velocities based on results from a 30-inch test barrel. If you’re one of those who shoots a little stubby thing in the duck blind, your 21-inch-barreled gun may be shooting measurably slower than the 30-inch-barreled pumps and autos on either side of you using the same ammunition.

Many hunters are convinced that a light gun and lightning-fast gun mount and swing are the only way to shoot quick-flushing birds. They aren’t. The faster you move the gun, the more likely you are to mis-mount. A few years ago I had someone time me with a stopwatch while I threw the gun to my shoulder as fast as I could and fired at a 3’x3’ steel pattern plate 20 yards away. My shots scattered all over the plate, and one missed the whole thing. Slowing my move by only a quarter of a second or so let me center every pattern on the aiming point. The same is true of swing speed. Moving the gun too fast causes mysterious misses, while moving it in time with the target makes the shot feel easy and in sync.

In a related experiment, I once timed several shooters using guns of increasing weight as they tried to hit a going-away target as fast as they could. The heavier the gun, the faster and more accurately they could get it on target.

The 28-gauge is in right now, and once again we’re hearing how it performs much better than it should. It does, but not for any reasons of ballistic magic, nor due to its so-called “square load.” The square load is supposed to be a shot column as tall as it is wide in diameter and it is thought to be perfectly balanced and efficient. The other definition of “square load” comes from the days of blackpowder, when a square load contained equal volumes of powder and shot. The 28 gauge is square by neither definition.

When I asked Federal’s engineers to run a comparative pattern analysis for me, we found an almost linear relationship between pattern efficiency and bore diameter. Bigger bores are better. The reason 28s do so well—and I love my 28-gauge dove gun—is because they don’t kick much, and people like shooting them.

Read Next: Thinking About Jumping on the 20-Gauge Waterfowl Gun Bandwagon? Read This First

Myth #9. A gun should pattern evenly.

Yes, it should, but people have the wrong idea about what an “even” pattern looks like. There is no such thing as a pattern that is perfectly distributed with one pellet per square inch. No two patterns are exactly alike, and all of them are distributed randomly, with a tighter core and looser fringe. Within that pattern, there will be clumps and gaps. (By the way, the random nature of patterns and those gaps and clumps lets us bust another myth while we’re at it: you can’t “read” breaks when you shoot clays. Just because the left side of a target breaks doesn’t mean you shot to the left.) An ”even” pattern is one that’s not too dense in the core and has plenty of pellets in the pattern fringe to provide some margin for error.