Like a lot of other turkey hunters, Brantley and I like to call ourselves minimalists. But, of course, that only goes so far. It makes me think of the classic Steve Martin comedy, The Jerk. To paraphrase: “I don’t need anything but a mouth call and a loaded gun. And David Halloran’s new custom ipe-and-black-limba-wood long box.” Like all the other “minimalists” out there, plus just about everyone else, we love checking out the latest gobbler gear, especially while we’re waiting for the spring season to start. So we did just that. We got our hands on all of the new-for-2019 turkey products we could, then we put them to use as much as possible throughout last fall and winter. Finally, we picked our favorites. Here they are. —D.H.

I love the idea of an ultra-­lightweight turkey vest, but in practice, most of them end up being flimsy junk. The new RNG-200 from Knight and Hale claims to be the lightest vest on the market, and at 1.5 pounds, it probably is. But it’s made out of a tough fabric that’s reinforced in the right spots, and it includes 10 adjustment points for a perfect fit. It has all the pockets you realistically need (including one for a water bladder and another for a bottle), a six-layer cushion seat, and a decoy sling. It might be the most thoughtfully designed turkey vest I’ve ever seen for the minimalist hunter. —W.B.

If you’re one of the many who suddenly has to kill a gobbler with a .410, here is a simple, effective, and inexpensive gun to do it with. Unlike the forgotten .410 in your gun cabinet, this break-action single-shot comes ready for the turkey woods, sporting a camo synthetic stock with sling swivels, an integral base for a red-dot sight, and an ­extended turkey tube. F&S shotguns editor Phil Bourjaily also tested this very gun with No. 9 Federal Heavyweight TSS last fall, and it delivered lethal-and-then-some patterns at 40 yards. Plus, the gun costs only $299. Wait. ­Kidding. It actually costs $100 less than that. There, now you can afford a couple of boxes of TSS. You’re welcome. —D.H.

My testing has shown a 3-inch .410 loaded with Tungsten Super Shot No. 9s to be as effective as a 3-inch No. 5 lead ­turkey load from a 20-gauge. TSS is expensive, but it is popular enough that stores sold out of it last spring. Hunters will have more options this spring, thanks to Browning Ammo’s new offerings. They’ll be available with No. 7, No. 9, or a blend of the two shot sizes in 12-gauge, 20-gauge, and .410. —W.B.

SurroundView technology was all the rage on Double Bull’s full-size blinds last year. The one-way-see-through fabric lets you see out, but critters can’t (or can’t easily) see in. This new Stakeout panel-blind model, with its two-hub design and three shooting windows, sets up in seconds to provide the concealment you need to hide a fidgety hunter or to draw a bow on a gobbler. And at 4.5 pounds, it’s a lot easier to haul into the woods. —D.H. 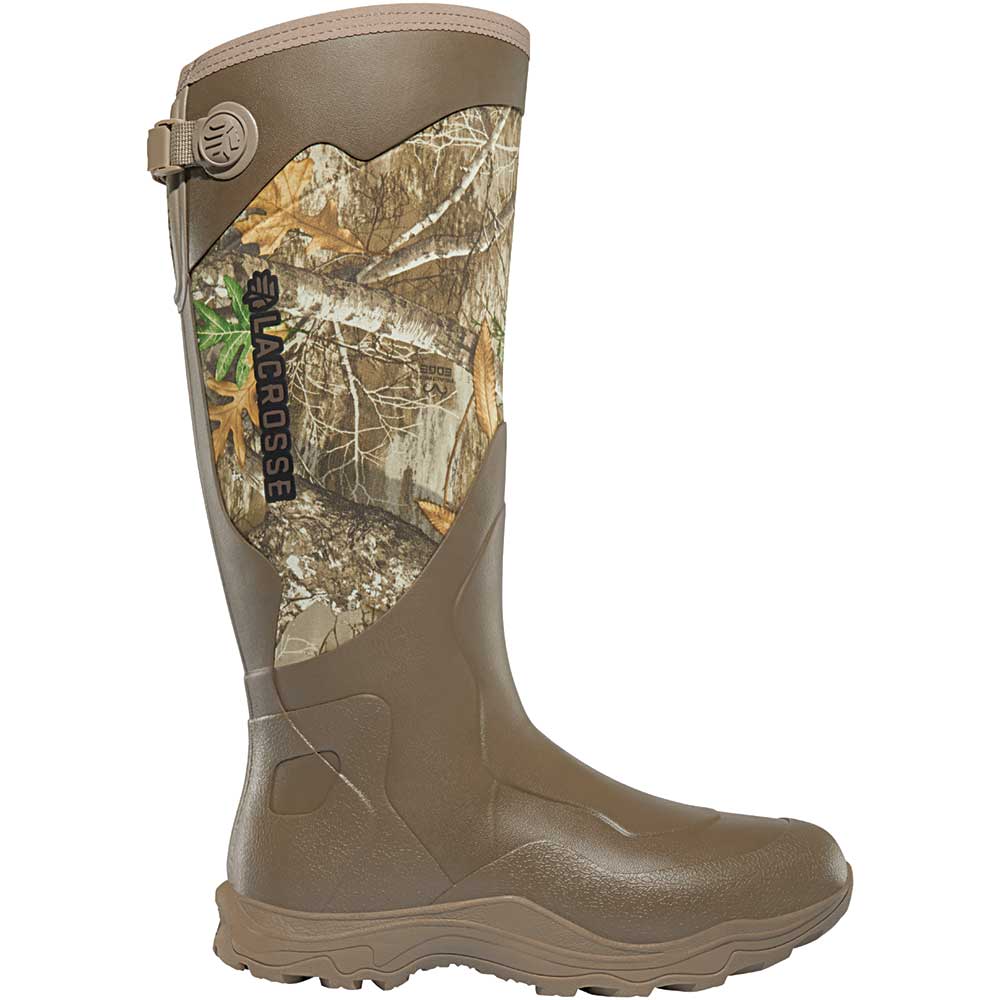 Creeks run high in the spring, so knee boots are standard issue for a lot of hunters. Problem is, they’re heavy and not the most comfortable footwear. LaCrosse’s new ­Alpha Agility, which blends rubber over a 5 mm neoprene core that’s reinforced in high-wear areas, is incredibly lightweight, and the shoe is made with an LVX compound that LaCrosse claims provides “athletic-shoe agility and comfort.” I’ve yet to put them through the wringer, but I’ve worn enough ­LaCrosse knee boots to know the brand makes a quality product that lasts. This boot comes in insulated and uninsulated versions. —W.B.

DSD decoys look incredible and are tough. About the only criticism I’ve ever heard about any of them has been that the original strutter is too big. It looks just like a real gobbler, but one that’s been fed GMO corn in an Iowa field. That size is enough to intimidate some birds. The new Jake Strutter is about a third smaller and, to my eye, about the perfect size. Just add a real fan, and it’s ready to go. If you don’t have a jake fan, you now have a great excuse to bust the first short-beard that comes yawp-yawp-gwabbling into range this spring. —W.B.

If your idea of turkey hunting means never leaving the inside of a ground blind, we can still be friends. We just can’t hunt together. That said, a blind is far and away the most effective way to kill a tom on those days when the best plan is to sit and wait. Summit has long been known for quality treestands, and now it’s in the ground-blind business. Its new Viper (available in three- and four-person models) is loaded with features, including a silent, swing-open panel door and TruView fabric windows, which allow you to see out but don’t allow turkeys to see in. A sliding system also lets you adjust shooting windows to your liking. —W.B. 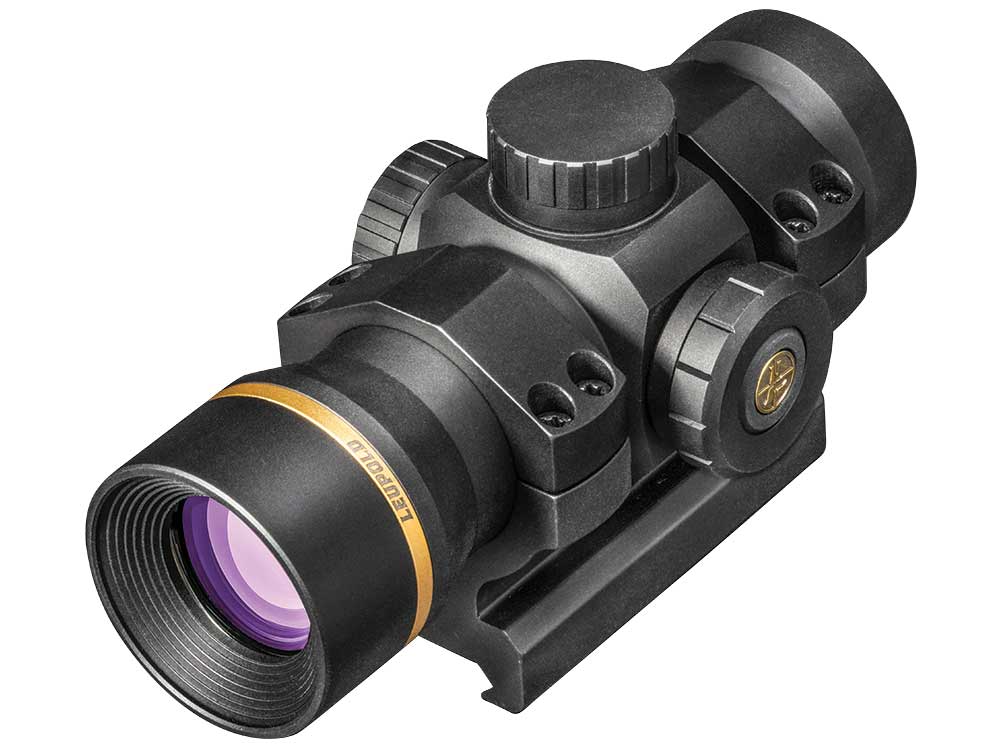 This is a rugged, American-made red-dot that’s backed by Leupold’s legendary quality and a lifetime warranty. If you’ve ever watched a cheap red-dot implode from the stress of too many 12-gauge turkey loads, you’ll appreciate that. It also has ­motion-​­sensor technology that automatically puts the dot in standby mode until you move the gun—when you hear a gobble, say—and then it lights back up. —W.B. 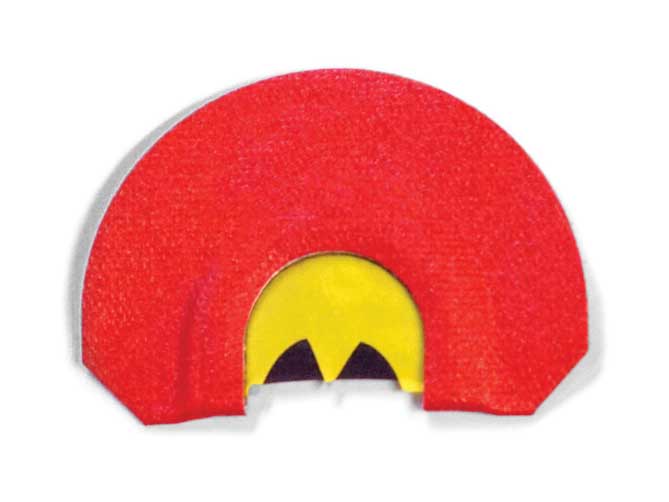 There wasn’t one call in the pile we got from Houndstooth that didn’t impress me. Their crystal and glass pots ring loud and clear, and for close-in soft talk, I love the two-reed V-Cut and Tom Bomb. But I can’t think of a better-­sounding, more versatile mouth call than the new “KB” Hen, a three-reed bat­wing that does it all, with ease. A killer all-around mouth call. —D.H.

On one hand, I hate lugging a big strutter decoy around. On the other, a reaping decoy can mean an almost gimme kill in the right situation. Montana’s new Wiley Tom pretty much solves the dilemma. Yes, you still have to carry it, but it weighs only 1 pound 14 ounces, and it folds up (even with real feathers), so you can stuff it in a vest. The basic decoy is made from a two-­dimensional fabric with a photo-realistic image of a strutter back and front. You can—and should—add a real tail fan and wing feathers. It also has a stake, so you can prop it up when you need to. —D.H.

I’m amazed at how few turkey hunters carry optics. I use mine almost constantly when I’m hunting. That said, this isn’t a game where you need lots of power for long-distance glassing. I’ve been using these compact 6×30 binos from Maven all winter. They’re about the perfect size to drop into my turkey vest, with all the magnification you need to distinguish a strutter from a stump at 300 yards. Unlike a lot of compact binos, these are of outstanding quality too. Touch up the shiny ­orange finish with a dab of face paint and you’re good to go. —W.B. 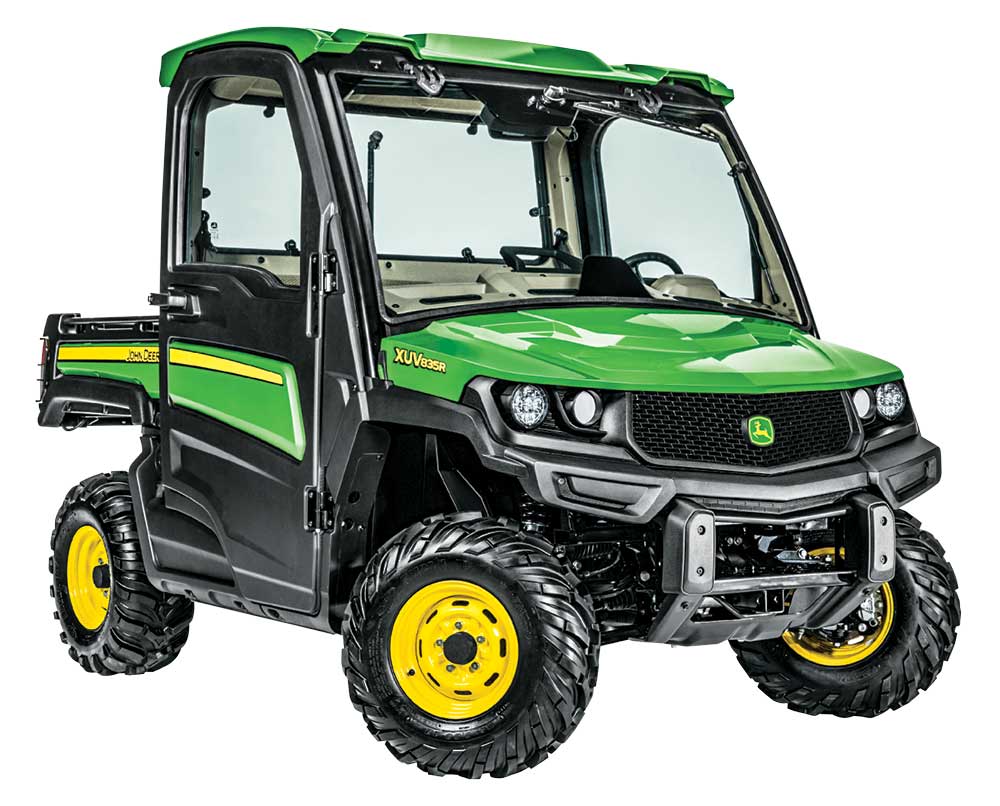 This won’t fit in your vest, but if you’re looking for a high-end UTV, this is a good one. My demo model had an enclosed cab with heat and air conditioning, as well as a hydraulic lift bed with lots of cargo room. The 54 hp EFI, liquid-cooled engine has plenty of get-up-and-go, and the machine has an on-demand 4WD system, a 1-ton towing capacity, and dual A-arm front- and rear-wheel suspension for a ride that’s nearly as smooth as your pickup’s. The bench seat has room for three hunters. Do you need all that to hunt turkeys? No. But don’t let that stop you. —W.B. 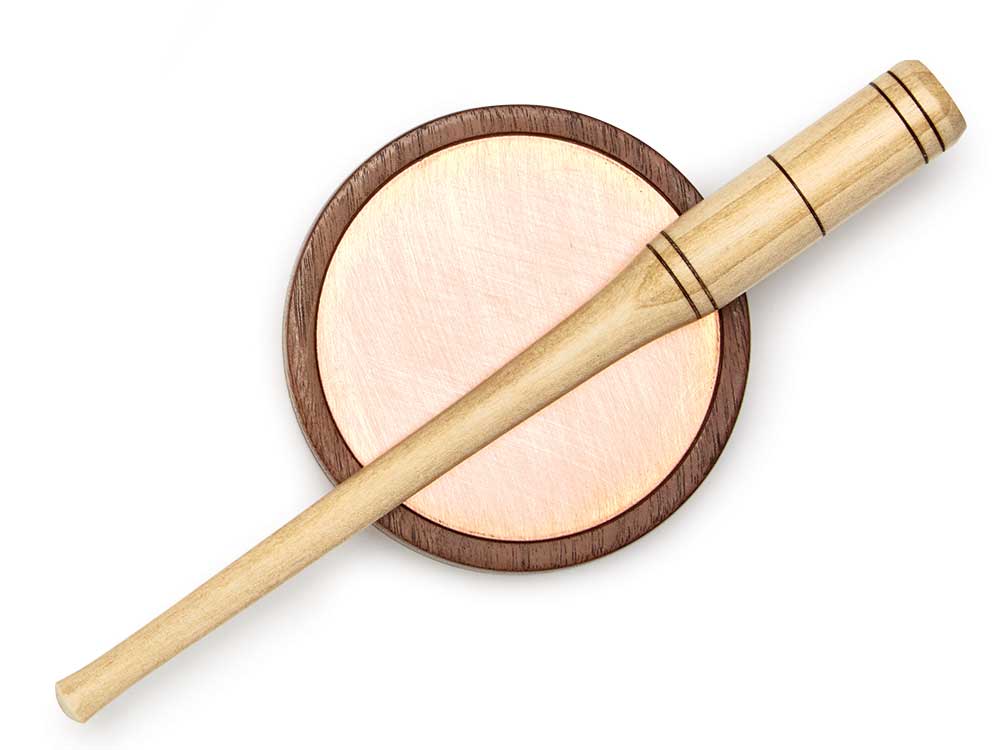 One of my favorite things to do is disagree with Brantley, so I was thrilled to find that he didn’t love this call. To be fair, some folks just don’t go for metal-faced pots. But I do. One of my favorite calls ever was the original MAD Aluminator, and this copper pot is similarly easy to run and versatile, plus way better looking. The 3-inch copper-over-steel surface is housed in a black-walnut pot that sits nicely in the hand. And with the provided white mahogany striker, it produces nice round yelps, raspy cutts, and soft purrs. That said, if you have extra strikers lying around like I do, try this call with a flared-tip laminate peg—it screams. —D.H. 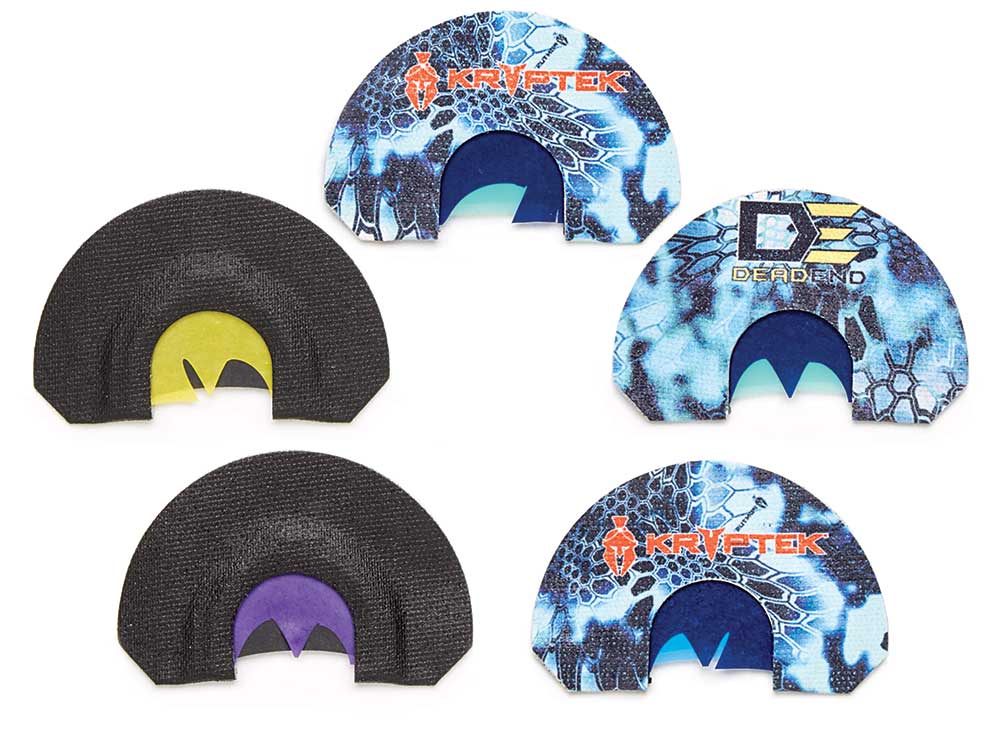 I’ve heard it said that four-time ­national turkey-calling champ Mitchell Johnson has tail feathers growing out of his butt, and I’m willing to believe that without any verification. It’s easy to think this guy is part turkey when he’s got a call in his mouth—and that’s due in no small part to the calls themselves, which he makes under his brand Dead End. I’ve been waiting for Johnson to come out with new mouth yelpers, and these five ­signature-​­series calls don’t disappoint. If I had to choose, it’d come down to two. The first is the Roadcrew Tyler Presley, a 3.5-reed shipwreck designed by the national and world champ. Easy to blow, raspy, and versatile, you can get loud with it and yet, despite all those reeds, soft clucks and purrs roll right out. The second is the Roadcrew Jeff Sipe, named after the two-time North Carolina state champ. This one has a totally unique cut that produces a pristine high note that drops down into a nasally yawp—perfect for kee kees, whines, do-whits, and piercing two-note yelps. The easy answer is to get both—plus the other three for good ­measure. —D.H.

The new HDR Jake decoy comes with two replaceable heads. Do you know how long it would take me to lose both of them? For you, however, they should come in handy. Jake decoys work, but they can spook a gobbler. This new hard-body quarter-strut is sized smaller than the real deal, so as not to be intimidating, and while one of the heads is made to look aggressive, the other looks submissive. If you have a read on the gobbler you’re dealing with—lover or fighter—you can adjust this deke to suit the situation. Like all Avian X fakes, this one is highly ­realistic (including flocked back feathers) and made to last. —D.H. 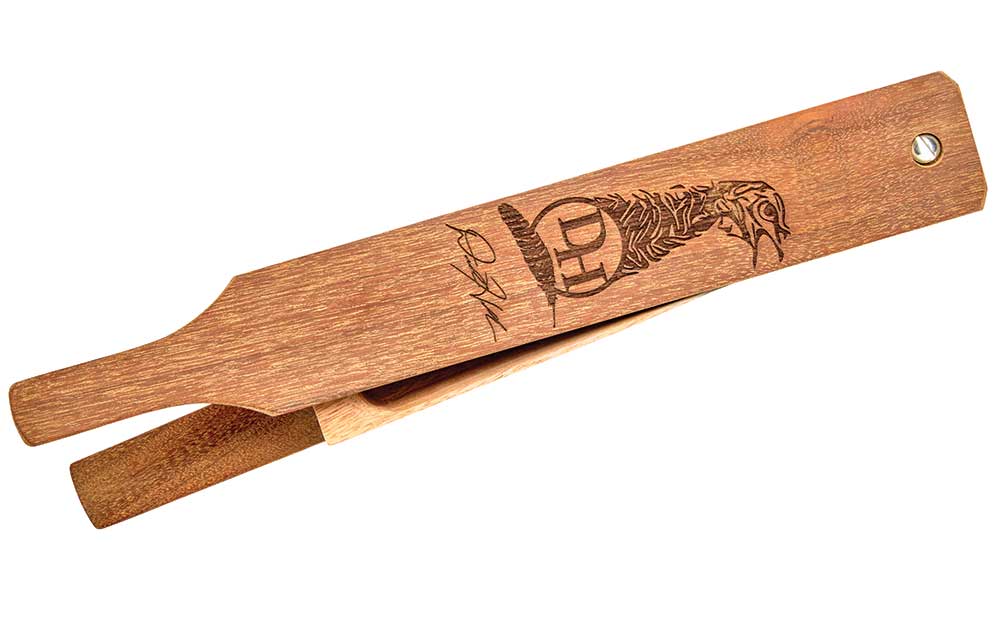 This might be the best box call I’ve ever run. Made of ipe and black limba wood, it’s a great-looking call. But I wouldn’t care if one of David’s interns had slapped a glazed-vomit finish on it, so long as it sounded just like this. Box calls have a high and a low side, and one of them is usually easier to run and better sounding than the other. Not here: I can squeak out a kee-kee run on the high side and swap over to a gobbler yelp on the low side—and hit about everything in between. Breaking a note over is smooth and easy, and the sound is as clear as a bell. —W.B.

At less than 6 pounds, you could probably carry an M2 20-gauge in your teeth while reaping a turkey. It shoots like a dream, and the Performance Shop Turkey Edition is designed to throw patterns tight as your fist. It’s cerakoted, with Mossy Oak Bottomland camo on the stock and fore-end. A Burris Fastfire II sight comes standard. Lose the sight and swap chokes, and it’d make a dandy timber gun for mallards. It’s not cheap, but we live in a world of $10-​a-​shot turkey shells. —W.B.