Blasts From the Past: EIG Derringer 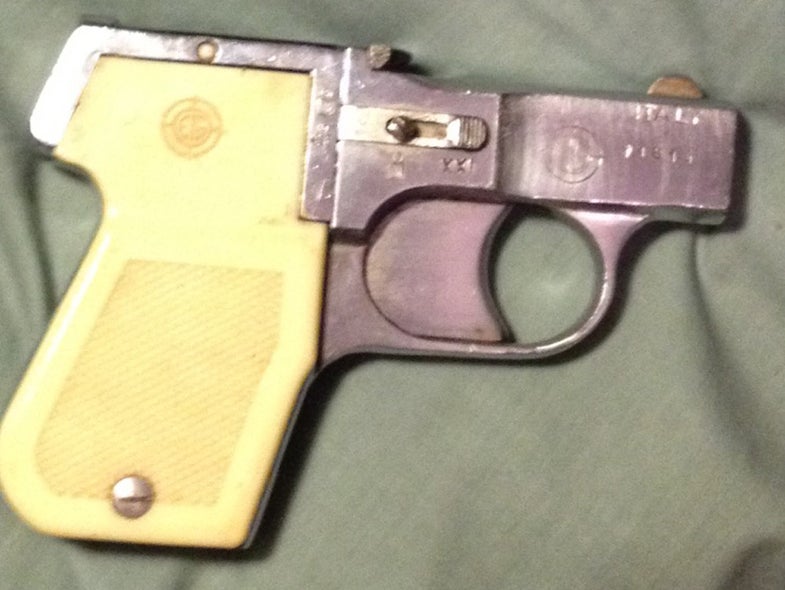 Today we’ve got a humble entry—an EIG derringer. The name EIG comes from Saul Eig, whose business was known as EIG Cutlery, for he originally imported and sold knives. Eig expanded into firearms in the 1950s, specializing in cheap guns—often derringers or pocket semiautos from Italy and Japan. When the Gun Control Act of 1968 banned the import of many cheap, foreign handguns, Eig converted a church complex next to his Miami warehouse into a gun factory. He shipped in the parts of guns he formerly imported and assembled them in the U.S. Eig’s guns were among the infamous “Saturday Night Specials” you used to hear so much about.

This EIG Derringer belonged to my grandpa. He always told me he bought it cheap when he was stationed in Germany with the Army in the late 40s. It has four barrels instead of the standard two, and it shoots .22 short, long, or LR. It’s a little beat up because he carried it often, but it functions just fine. That said, the accuracy is horrendous; I managed to take a rabbit with it a few years back, but I believe it was more out of luck than anything. The gun used to live in my truck console, but my brother has it currently. It was the first gun he ever shot. It’s probably not worth any money but it has sentimental worth to both me and him.

Congratulations are due to Josiah for actually hitting anything, much less a rabbit, with his EIG Derringer. As this gun illustrates, Blasts from the Past guns need not have belonged to the rich, the famous, or the historically important. Nor must they be high grade. We want to showcase reader guns as often (or more often) than we feature museum pieces or expensive auction guns. All they have to be is old, and our definition of “old” is pretty flexible. Please send your old gun pictures to fsgunnuts@gmail.com.

RELATED: Blasts From the Past: Winchester Model 1906 .22 Pump