Had Enough of Your Treestand? Get Out and Bounce Some Bunnies

Nothing can cure the treestand blues faster than a rabbit hunt 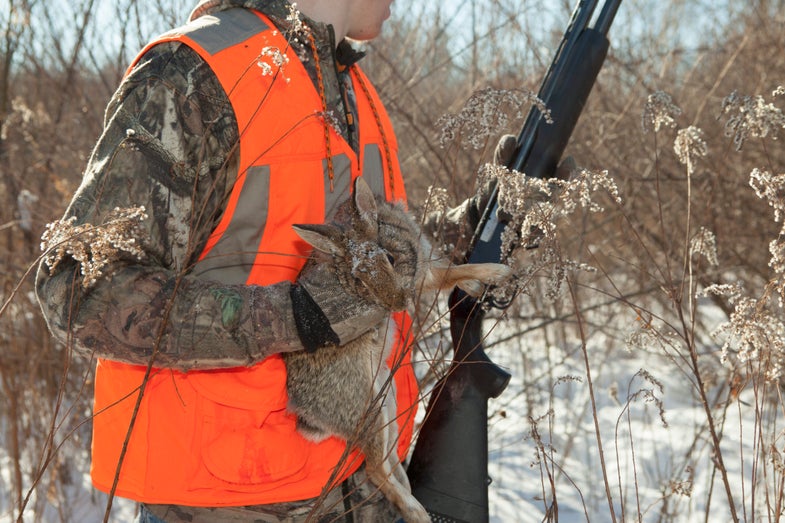 Find a good thicket or even a junkyard and you're in for a good day of rabbit hunting. Raphye Alexius via Getty Images
SHARE

I’m no houndsman, but even I can distinguish Old Jack’s cries from the rest. He’s the big, block-headed male in my buddy Ryan’s pack of four beagles. When he’s on a hot track, it sounds like he’s snagged his nether parts in a woven-wire fence. You’d better be on your toes when you hear it, because there’s a rabbit coming.

Along the riverbottom, small fields and woolly fencerows meet dense timber, all set in soupy mud, between puddles of standing water. This is swamp-rabbit country. The dogs are going nuts, but they’re getting fainter by the second. That doesn’t seem to bother Ryan any.

“They’ll bring him back around here directly,” he says.

Sure enough, within minutes the hounds’ voices rise again. It sounds increasingly frantic, as if the dogs are about to catch the rabbit. In fact, the beagles are as apt to be walking as running, and the rabbit is usually 50 to 75 yards ahead, moving at an easy clip, even stopping at times.

That’s what this one is doing when we first see him. The dogs are still barking after we shoot, but they don’t come into sight until we’re over the rabbit. Ryan lets them mouth the bunny’s haunches a bit before sending them into the next thicket.

“Y’all kick us out another one,” he says.

Where to Find the Best Rabbit Cover

By this time of year, I’m ready for rabbits. I’ve had enough solitude in a tree­stand, and it’s nice to talk aloud with buddies, kick some brush, and usually enjoy plenty of action. Hunting wild bobwhites may be mostly a thing of the past in these parts, but there are still rabbits to be found wherever there are thickets. Clear-cuts and neglected power lines, for example, are good bets. I purposely leave the edges of my deer plots thick and tangled so that I can bounce a bunny or two come December.

My best spot, though, is an old scrapyard on the edge of town. Over the years, locals have abandoned cars and boats, piled up slab lumber and sheets of tin roof, and scattered various other junk. All of it is now grown over with blackberry vines and brambles and is full of rabbits. You just have to watch for nails.

Dogs aren’t necessary, and bouncing rabbits isn’t rocket science. You just plow through the thickest stuff you can see. Make sure to put a boot on anything that offers overhead cover, whether it’s a brushpile, vegetation bent over by weather, a sheet of tin, or a Chevy Chevette. Frequent pauses seem to make bunnies nervous, causing them to dart out of the cover. Most of the thickets you kick will not produce a rabbit—which means that every bunny that does bolt takes you by surprise, and makes for a fun challenge.

How to Hunt Rabbits With Dogs

Dogs do help, though, in finding rabbits and providing an easier target. Ryan, my former college roommate, has owned beagles his entire life. He says the mark of a good one is that it will burrow down into a brushpile—or underneath a scrapped car—and really spend time nosing around. “Lots of rabbits are missed in places like that,” he says, “because some dogs won’t get down in there to really look for them.”

A flushed rabbit will eventually circle back to the area where it was first jumped. A cottontail may run 100 yards before turning back, but a swamp rabbit may go half a mile or more. Once the chase is really on, the bunny will often abandon cover and hop down the path of least resistance to get back to where it wants to be. The best shooting, therefore, tends to be on ATV trails, logging roads, field edges, and the like. As the dogs give chase, locate and set up on such areas, then keep still. A rabbit won’t pay much attention to you, even in the wide open, unless you move.

Having more hunters increases the odds of somebody’s getting a shot, of course, but you don’t need a big gang. The guy who listens carefully to that lead dog, foresees the likeliest travel routes, and adjusts accordingly will get plenty of shooting either way. If there’s a hound in the pack as distinctive as Old Jack, he’ll tell you right where you need to stand.

One thing I love about rabbit hunting is that I can grab a single-barrel shotgun that rarely sees use otherwise from the safe. Such a gun is lightweight and a joy to carry all day, broken open in the crook of my arm until it’s time to shoot. My sentimental favorite is the 16-gauge Winchester Model 37 that my dad gave me years ago, but if I were buying a new single-​barrel rabbit gun, I’d look for a used H&R Topper 20-gauge. Having only one shot will cost you a rabbit on occasion, but that just means the chase can go on a little longer. —W.B.