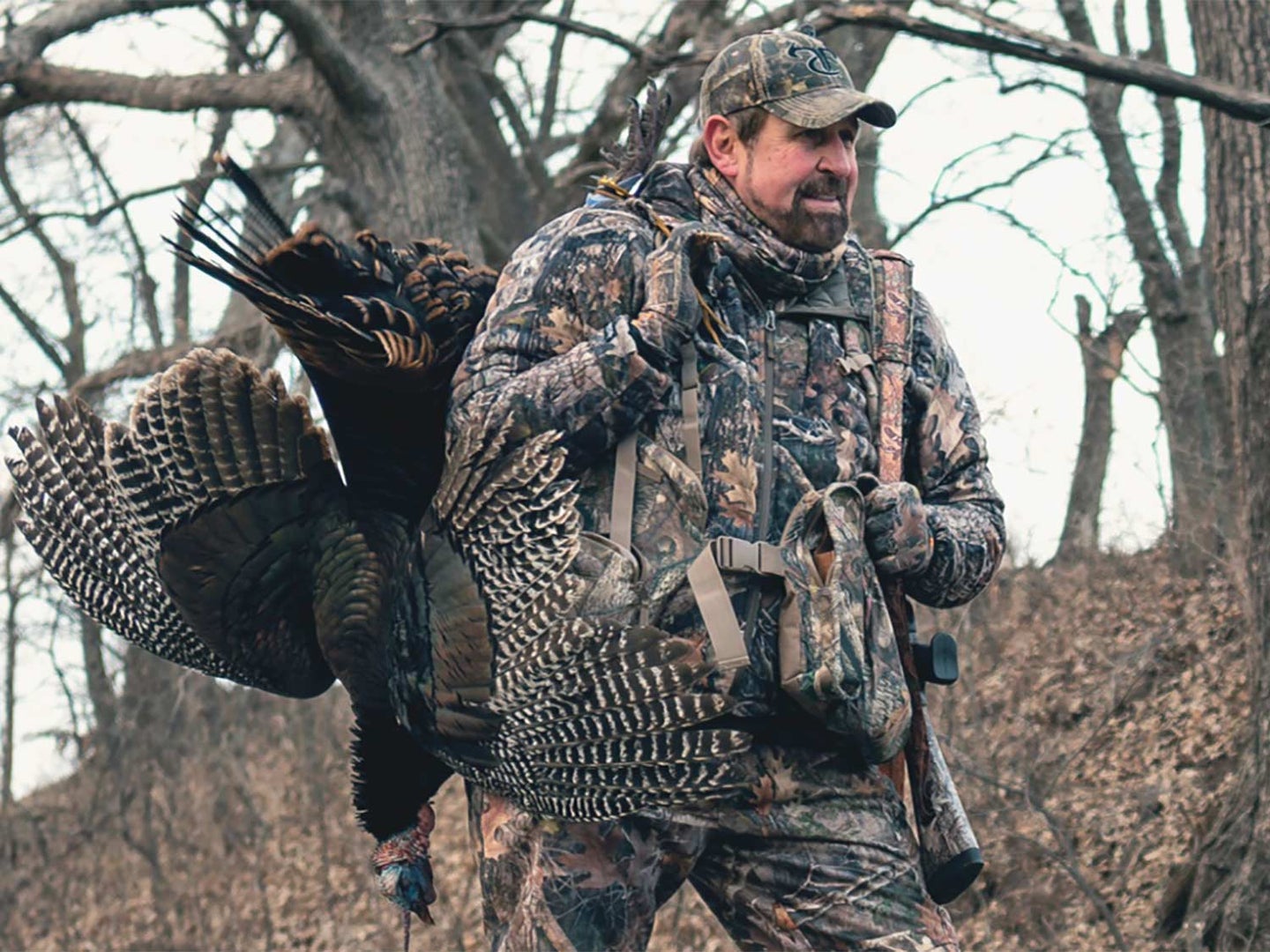 Rob Keck says the action in December and January can be better than on a spring morning. Rob Keck
SHARE

The “fat waddle” is the half-strut swagger a tom turkey puffs into as he’s inching toward a fight. It’s instantly recognizable, and something every serious gobbler chaser craves to see. We envision it as a spring thing—but really, it’s just a turkey thing. One chilly October morning, I had a fat waddler come right to me, ready to finish a fight that I’d started.

It had been raining, and so the woods were perfect for my dad and I to slip around and blind-call, trying to strike a group of turkeys. Our tags were for either sex bird, so we didn’t care what we found. But I took a break from the kee-kee runs to make a few deep jake yelps on a long box call. I was answered by a single cluck, 150 yards away. I suspected the bird was in a picked beanfield. We belly-crawled to within sight of the field and sure enough, six swinging-beard toms were feeding their way across it. I made a few more deep yelps, and slowly raised a dried jake fan in front of me, twisting it this way and that. The boss bird commenced fat waddling within seconds. His head was white as April when Dad shot him at 10 steps.

Why would you wait until spring to see such a thing?

Numerous states have late fall and winter turkey seasons. Some are archery only, but others—including public gobbler meccas Kansas and Nebraska—are open to shotgun hunting through the end of January. The hunting pressure is light, and people seriously underestimate how much fun the experience can be. Gobblers will come in for a fight all fall, but the action only gets better as the season gets later. In fact, if you ask turkey hunting legend Rob Keck, winter is actually the most exciting time of all to turkey hunt.

“It’s like spring gobbler hunting on steroids,” he says. “Anyone who knows how a gobbler responds to a gobbler or jake decoy in spring should know it works in January and December, too. But instead of having one or two gobblers come in, you might have 20 or 100. To me, it’s the most exciting of all the seasons to hunt. You hear more, see more, and in places, you can shoot more.”

How to Find Turkeys in Fall and Winter

The drawback in the fall and winter is that turkeys aren’t gobbling (at least with any regularity), and they aren’t strutting in green pastures. Finding them, especially smaller bachelor groups of toms, is the challenge.

In the East, you can go about this a few ways. If you’re a deer hunter, make note of where you see gobblers while you’re in a treestand. So long as food sources don’t change much and the birds’ roosts aren’t disturbed, they’ll stick around.

But earlier in the fall, a new mast or a fresh-cut crop field might send a flock of gobblers on a sojourn 6 miles away, too. If I’m striking out blind in search of turkeys to hunt, I love hiking through large public areas, since they give me room to roam without worrying about property lines or areas that are baited for deer (which makes a place off-limits to turkey hunting in some states, my home state included). Walk hardwood ridges and glass fields, looking for fresh scratching, tracks, and turkey scat, and do some blind-calling to draw a response from feeding flocks. That response will usually be soft and quick, so listen carefully to zero in on its direction.

Turkeys are generally easier to find in the winter—especially in the prairie states—because they begin amassing in big flocks around steady, high-energy food sources. Cut crop fields are always a good bet. Cattle pastures and feed lots, where the birds can pick at waste grain in the pies, aren’t picturesque, but they can attract scores of birds.

In big timber, you’ll need to be on the lookout for remaining acorns or beechnuts. Much of those winter flocks will be comprised of hens and young-of-the-year poults, but there’ll usually be bachelor gangs of longbeards and super jakes hanging out, too. Those are the birds you’re after. Once you pinpoint gobblers on a routine, more than half of the battle is already won.

It’s a safe bet they’ll stay on the pattern for at least a few days. You can slip right in with a fan and shoot one, like Dad and I did, or bust up the flock and try to call the stragglers back in, per the traditional fall method. Either is a fairly high-odds way to go home with a gobbler.

But if you want to see the “fat waddle,” now is not the time to be hasty. Glass from a distance, especially at fly-up or right after fly-down, to figure out where the birds roost, where they enter fields to feed, and where they stage between those two places. Then, you can plan your hunt.

Start Your Hunt Early in the Day

Sometimes it seems as if turkeys fly up to roost, go to sleep, and forget who’s in charge during the night. Pecking orders are challenged virtually every day. “Those bachelor groups of gobblers, especially the big ones with 50-plus birds, will jockey for that alpha position when they fly down in the morning,” Keck says. “In winter, it really intensifies. It’s a situation where you’ll see a lot of strutting, flogging, spurring, challenge purring—and even gobbling mixed in.”

Obviously, the closer you can get to that fly-down spot, the better. You need to be early though, since the trees are barren of foliage. If that, or a property line, prevents you from setting up tight to the roost, Plan B calls for waiting for them at the food, or in staging areas near the food. Then, you need to follow Keck’s advice for setting the ruse.

How to Call and Decoy Fall Turkeys

“I usually carry three Montana strutting decoys,” Keck says. “They’re my favorite, and I can fold them up and put them right in my turkey vest.” Keck also takes a pair of real, dried fans and puts them on homemade decoy stakes. He makes the stakes from a cut piece of carbon arrow shaft with an empty .300 WSM hull on top, to which he secures the fan, and a field point on bottom, which will slide easily into frozen ground. Lastly, he adds a jake decoy in a submissive posture to the mix.

Don’t be afraid to call—and then call a little more. Young-of-the-year turkeys make all sorts of funny sounds in the winter, so you’re not going to mess anything up with an off note. But when you’re calling at a flock of 100 turkeys, you need to stand out.

Keck especially likes challenge purrs. “I use multiple slate calls, and switch them back and forth,” he says. “Throw in some gobbles here and there, too.”

Long box and old-school scratch box calls are effective for deep gobbler yelps and clucks, too. I also always keep mouth calls handy when hunting in the fall. In a pinch, I can do everything from fight-purr to kee-kee on one without having to move.

“I want to set up in an open area, where turkeys can see the decoys from a long way,” Keck says. “When they see that spread, they’re coming. Usually, they target that submissive jake, and they’ll just beat the daylights out of it.”

Guns and Ammunition for Fall Turkeys

Twenty-four years ago, I went turkey hunting for the first time, and I wounded and lost a gobbler at 30 steps with my 20-gauge and lead No. 6s. It took a long time for me to shake that hatred of the yellow shell for turkeys, and I’d give grief to anyone who admitted to carrying one, too.

But today’s equipment is so much better than it was decades ago. I’ve carried a 20-gauge most of the last two seasons because it’s lighter, handier—and with Tungsten Super Shot, and the right choke tube, it’s at least as effective as my 12-gauge with lead. My go-to turkey gun, spring or fall, is now a Benelli M2 20 with a Carlson’s tube, loaded with either Federal or Browning TSS. I’ve used both 7s and 9s, and both shot sizes pattern well for me (some states regulate shot sizes on turkeys, so check; 7s might be your only legal option). The Browning loads have a little more shot, but I can’t tell much difference on paper or on turkeys.

In the fall, especially if you’re hunting like this, shots will be close, so you don’t need to worry much about 50-yard killing power. More important is surgical marksmanship and tight close-range patterns. You’re probably going to have multiple turkeys in front of you, and the odds of killing more than one in a shot are high if you’re not extra careful. Being sure your bird is free and clear of all the others before pulling the trigger is on you—it’s probably a game violation if you mess up—but a tight-shooting gun adds extra assurance.

If it doesn’t work out, just wait. Chances are you can set up a little differently the next morning, and get to see the fat waddler show all over again.