Aguila ammunition’s cute 1 3/4-inch Minishells are best known by owners of the Kel-Tec KSG and other high-capacity tactical shotguns... 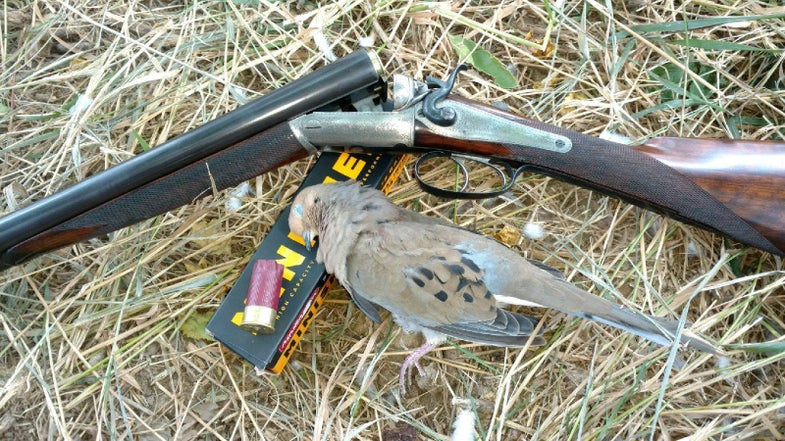 Aguila ammunition’s cute 1 3/4-inch Minishells are best known by owners of the Kel-Tec KSG and other high-capacity tactical shotguns as a way to enlarge magazine capacity.

But Minishells also come in 7 ½ shot, which means they have uses clear at the other end of the shotgunning spectrum. The gun shown here is about as far from a Kel-Tec as you can get: it’s a Harrison back-action sidelock. It’s basically the same as a Cogswell and Harrison, which is the better-known name. “Back action” means the mainsprings lie behind the hammers and back action guns, both shotguns and some double rifles, are often recognizable by the distinctive shape of the sideplates. This gun was made in London around 1870. It belongs to my friend Matt, who is a fan of old doubles. Despite its age, this gun has fluid steel barrels, although it’s possible it once had Damascus barrels which were replaced, with the original rib then relaid on the new barrels. It’s a beautiful gun, and it has 2 ½-inch chambers.

Although some will shoot low pressure 2 ¾ inch shells in 2 ½ inch chambers,* Matt is a carpenter whose hands are his living. He takes no chances. And, while you can buy or load 2 ½ inch ammo, he didn’t have any when he invited me dove hunting the other day, so he shot my Minishells.

The Minishell contains 5/8 ounce of high quality 7 ½ shot, which Aguila makes in their own tower and alloys with 5% antimony. Essentially, Minishells make your 12 gauge into a .410, although I bet it patterns more efficiently than a real .410. These patterned well enough on close-decoying doves that Matt killed seven and I shot a few after tiring of shooting backup with my regular shells.

We had doves at 10 and 15 yards and the Minishells were lethal at that distance. I’ve shot a few doves with them since, and in general I’d say they are good for small birds out to 20 yards although I’ve made a few longer shots. On clay targets, which do not suffer when inadequately shot, Minishells can be effective at much longer ranges. The other night I broke 24 straight trap targets from the 16-yard line with them, then got so excited I was about to shoot a 25 straight with Minishells that I spaced off the last bird, then broke another with my extra shell to go 25×26. I also broke birds easily from as far back as the 21, which meaning the shots were up to 35 yards from the muzzle. Minishells are quiet, recoiless, and plain fun to shoot. They’re instructive, too, as the absence of recoil lets you see exactly what happened the instant the gun went off.

They aren’t perfect. They cycle in some pumps but not others, and they may not reset the inertia triggers on some break-action guns. The 20-round boxes, which look like Toblerone boxes, won’t stay shut and are a pain to put shells back into. Fortunately, they will be gone in favor of 25-round boxes next year. The construction of the wad, which has no skirt, which makes me think they may not be the best for cold-weather shooting when plastic gets stiff. For shooting a few doves on a 70-degree day with a 146-year-old double, though, they’re perfect.

*Pressures rise when you do that. I’d say don’t try it at home.