Photo by Dan Saelinger Every deer hunter frets about b.o., but our attempts to manage it are all over the... 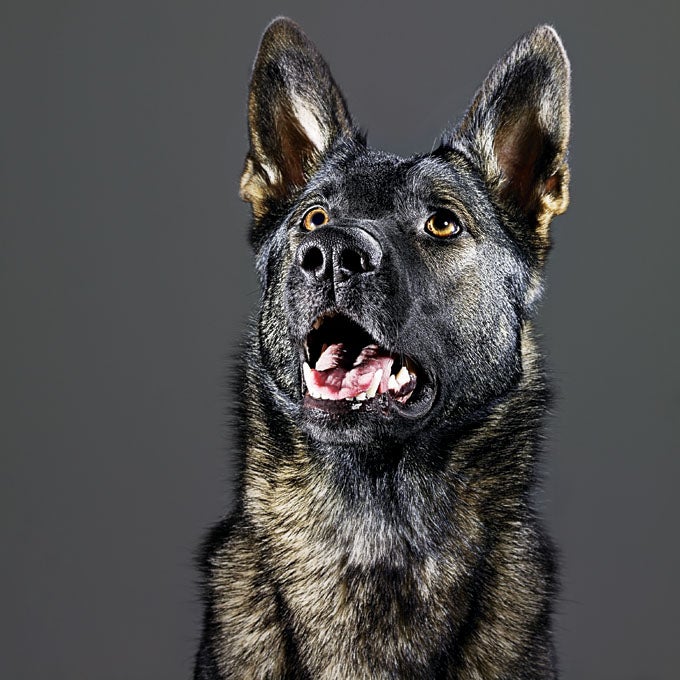 Every deer hunter frets about b.o., but our attempts to manage it are all over the map. Some of us just play the wind. Many of us shower or spray down. Then there are those whose pre-hunt deodorization routine borders on obsessive-compulsive. I wanted to know if any of it really makes a difference. So I left it to Chance­—the German shepherd K-9 partner of Luke Sass, a sheriff’s deputy in Houston County, Minn. Chance not only sniffs out contraband drugs; he can find a lost person or track down a runaway crook. I asked Sass if he could try to find a hunter attempting to hide his body odor. “Absolutely,” he said.

Stinking Inside the Box
Like most K-9 cops, Chance learned to find people by playing the Hot Box game. Six plywood boxes (4 x 4 x 4 feet) are spaced evenly in two rows across a large field. People enter the boxes for two to three minutes to “heat them up” with human scent. Then all but one person exits his box. The dog’s mission is to sort through the residual human odor wafting from every box and pinpoint the one hiding the bad guy, or in this case, the hunter.

As in the initial installment of our ongoing scent-control investigation, we conducted three simple tests, this time to see if certain scent-control measures could confuse or perhaps completely fool the dog. For each, Sass walked Chance to one end of the rows of boxes, unclipped the leash, and commanded the dog to “find him.” Chance swung 15 yards or so downwind to sift through the scent clues. When he pinpointed the hot box, Chance stopped, barked, and leapt at the enclosure.

Test #1: Full-Blown B.O.
Hunting buddy Bob Borowiak volunteered to be the dummy, er, hunter, for the day. For the first test, Bob showed up stinky. He had not showered nor attempted any other scent-control measure. He wore street clothes laundered in regular soap and his everyday tennis shoes.

The Result: From the moment Chance began his swing downwind, it took him roughly 20 seconds before he was barking at Bob’s box. Once he winded the hottest enclosure, there was no hesitation; he moved straight to it.

Test #2: Showered and Sprayed
For the second test, Bob did his normal pre-hunt regimen of taking a no-scent shower and dressing in camo clothes washed in a no-scent detergent and stored in a plastic tub. He also wore high rubber boots to keep his walking trail clean and to hide foot odor.

The Result: It took Chance 18 seconds to find him. Again, there was zero hesitation.

Test #3: Compulsively Clean
Our final test involved every scent-control measure we could think of. In addition to the shower, Bob wore two layers of activated-carbon clothing. I soaked him with a scent-killing spray, and he chewed a wad of gum designed to eliminate breath odor.

The Result: It took Chance 13 seconds to find him. No hesitation.

The Takeaway
Sass, as well as fellow K-9 handler and avid bowhunter Tracie Erickson, were confident Chance would find Bob regardless of the scent-control measures. But we all expected a significant variance in the time it would take. If the measures had any real effect, we assumed we’d see some hesitation or uncertainty on Chance’s part—particularly given that the other boxes also contained human scent. But that simply didn’t happen. As the test progressed, Chance got increasingly excited and perhaps ran a bit faster when swinging downwind, but once he got downwind, the time it took him to nail Bob was the same—it was more or less instantaneous.

Borowiak was bowled over by the results but plans to maintain his shower-and-spray routine on the prospect that it might have an impact upon how quickly or how hard a deer spooks. It’s a valid point: We can’t tell how a deer would react under the same circumstances. But what the experiment showed without a doubt is that all the scent-reducing measures in the world won’t make a bit of difference to a downwind dog—which suggests at the very least that if a deer is downwind and close, he can smell you, no matter what. In a time when we are bombarded by testimonials claiming that product X makes downwind deer oblivious, our tests say: Probably not. According to Chance, if you think you can ignore the wind, you’re barking up the wrong tree.